“Conflict-free,” the magic words that mean we can process things concurrently or in parallel at full speed, with no need for coordination. Today’s paper introduces Cyclades, a system for speeding up machine learning on a single NUMA node. In the evaluation, the authors used NUMA nodes with 18 CPUs and 1TB memory. Extending Cyclades to work across NUMA nodes, or even in a distributed setting using a parameter server is reserved for future investigation.

The overall hierarchy of ML speed and scale probably looks something like this:

Remember not to underestimate what can be achieved on a single thread. Because of their accessibility and ease of programming, systems that work on a single box can have great utility. Cyclades efficiently utilises multiple cores through a graph partitioning step that allocates connected-component subgraphs to cores, eliminating the need for cross-core coordination. One of the compelling things that is unique about Cyclades is that unlike other systems we’ve seen (Asynchronous Complex Analytics, Petuum) that use asynchronous processing to speed up ML, Cyclades maintains serial equivalence. That is, it guarantees to give the same results as a serial implementation. Without serial equivalence, other systems rely on analyses that the deviation from serial is not significant (stays within some bound).

Since it returns exactly the same output as a serial implementation, any algorithm parallelized by our framework inherits the correctness proof of the serial counterpart without modifications. Additionally, if a particular heuristic serial algorithm is popular, but does not have a rigorous analysis, such as backpropagation on neural networks, Cyclades still guarantees that its execution will return a serially equivalent output.

At the core of Cyclades is a clever partitioning strategy. Consider a graph with two types of vertices (bipartite), update functions and model variables. We create an edge from an update function to a variable if that function reads or writes it. 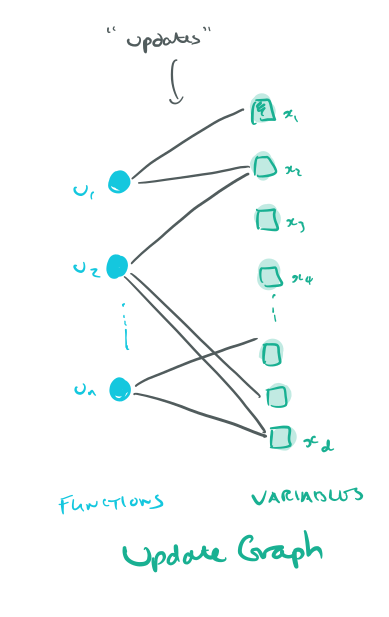 From this we can create a conflict graph (Cyclades never actually fully materializes such a graph, but it’s a useful conception). The conflict graph contains only update function vertices, and links two vertices with an edge if they share at least one variable in the update graph. 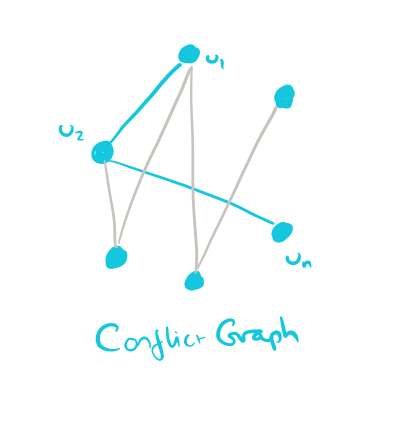 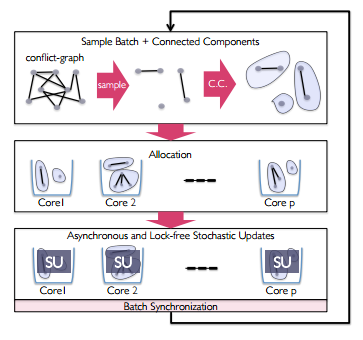 Let G be a graph on n vertices, with maximum vertex degree Δ. Let us sample each vertex independently with probability p = (1 – &eps;)/&Delta and define as G’ the induced subgraph on the sampled vertices. Then, the largest connected component of G’ has size at most (4/&esp;2) log n, with high probability.

This is pithily summarized by the authors as ‘frugal sampling shatters conflicts.’ It tells us that by careful sampling of the vertices in the conflict graph, we can induce a subgraph with at least O(log n / &eps;2) components to distribute across cores.

(There’s something of importance in the ‘induced subgraph’ phrase that I feel I don’t fully understand. Because what really matters surely is the size of the largest connected component in G (not G’)? (We do the actual computation on G, right?). My interpretation is that by sampling we can create a subgraph G’ from which we can infer connected components that with high probability match the connected components of G (and have certain maximum size)… But then why would the number of components depend on our sampling frequency?? The results indicate that the process clearly works, so we can press on, but if anyone can put me straight here I’d appreciate it!).

Moreover, since there are no conflicts between different conflict-groups, the processing of updates per any single group will never interact with the variables corresponding to the updates of another conflict group.

Cyclades samples in batches of size B = (1-&eps;)n/Δ, and identifies conflict groups for each batch using a connected components algorithm. The appendix shows that this can be done efficiently in time O(num_edges . log2n / P) where P is the number of processor cores available.

We can put all the pieces together for the complete Cyclades algorithm: 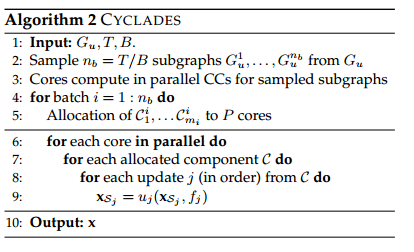 The inner loop is parallelized and can be performed asynchronously with no need for memory locks as all the cores access non-overlapping subsets of the input x. This gives good cache coherence, and as each core potentially access the same coordinates multiple times, good cache locality.

Observe that Cyclades bypasses the need to establish convergence guarantees for the parallel algorithm.

And we have the main theorem:

Does it work in practice?

The authors implemented Cyclades in C++ and tested it against HogWild! on equivalent number of cores, and also against a single threaded implementation .

It achieves a relative speed-up of up to 5x over HogWild! when both systems are given the same number of cores.

When we decrease the step-size after each epoch, Cyclades shows even stronger relative performance:

It would be interesting to see where else the Krivelevich connected component result can be applied, it seems that many graph computations could potentially benefit.