We’ll be looking at some of the papers from ICLR’17 this week, starting with “End-to-end optimized image compression” which makes a nice comparison with the Dropbox JPEG compression paper that we started with last week. Of course you won’t be surprised to find out that the authors of an ICLR paper set up a system to learn an efficient coding scheme. Covering this paper is a bit of a stretch goal for me in terms of my own understanding of some of the background, but I’m going to give it my best shot!

As we saw in that paper last week, we typically use a probabilistic encoding scheme (i.e., things that occur most frequently in the chosen representation get encoded using the fewest bits…) for image compression. Or as Ballé et al. put it:

Data compression is a fundamental and well-studied problem in engineering, and is commonly formulated with the goal of designing codes for a given discrete data ensemble with minimal entropy. The solution relies heavily on knowledge of the probabilistic structure of the data, and thus the problem is closely related to probabilistic source modeling.

A code can only map to and from a finite set of values, so any continuous data (e.g., real numbers) must be quantized to some finite set of discrete values (e.g., an integer range). As we’ll see soon, all this fancy talk of “quantizing” actually equates to the simple operation of rounding to the nearest integer in this instance. However you choose to quantize, you’re going to lose some information, which introduces error in the image reconstruction.

In this context, known as the lossy compression problem, one must trade-off two competing costs: the entropy of the discretized representation (rate) and the error arising from the quantization (distortion).

Or as you and I might express it: you have to trade-off between compressed image size and image quality.

A typical image compression scheme has three phases, using what is known as transform coding:

Jointly optimising both rate and distortion (size and quality) is known to be difficult. In this paper the authors develop a framework for end-to-end optimisation of an image compression model based on nonlinear transforms. The parameters of the model are learned using stochastic gradient descent, optimising for any desired point along the rate-distortion curve.

The big (and the not-so-big!) picture

The basic structure looks like an autoencoder. We start with an input vector

, which is passed through a non-linear analysis transform consisting of convolution, subsampling and normalisation layers. The output vector

is quantized by the simple scheme of rounding each element to the nearest integer, yielding a discrete representation,

To reverse the process, the discrete representation

is reinterpreted as a continuous-valued vector

. A synthesis transform consisting of inverse normalisation, upsampling and convolution layers is then used to construct an image.

If we put these two processes back-to-back, we can see that

is acting like the encoding in an autoencoder. But it’s not the actual image encoding. To get that we use a probability-based encoding to encode

. The rate, R of the discrete code is lower-bound by the way the network choses to encode

the mean squared error is used. 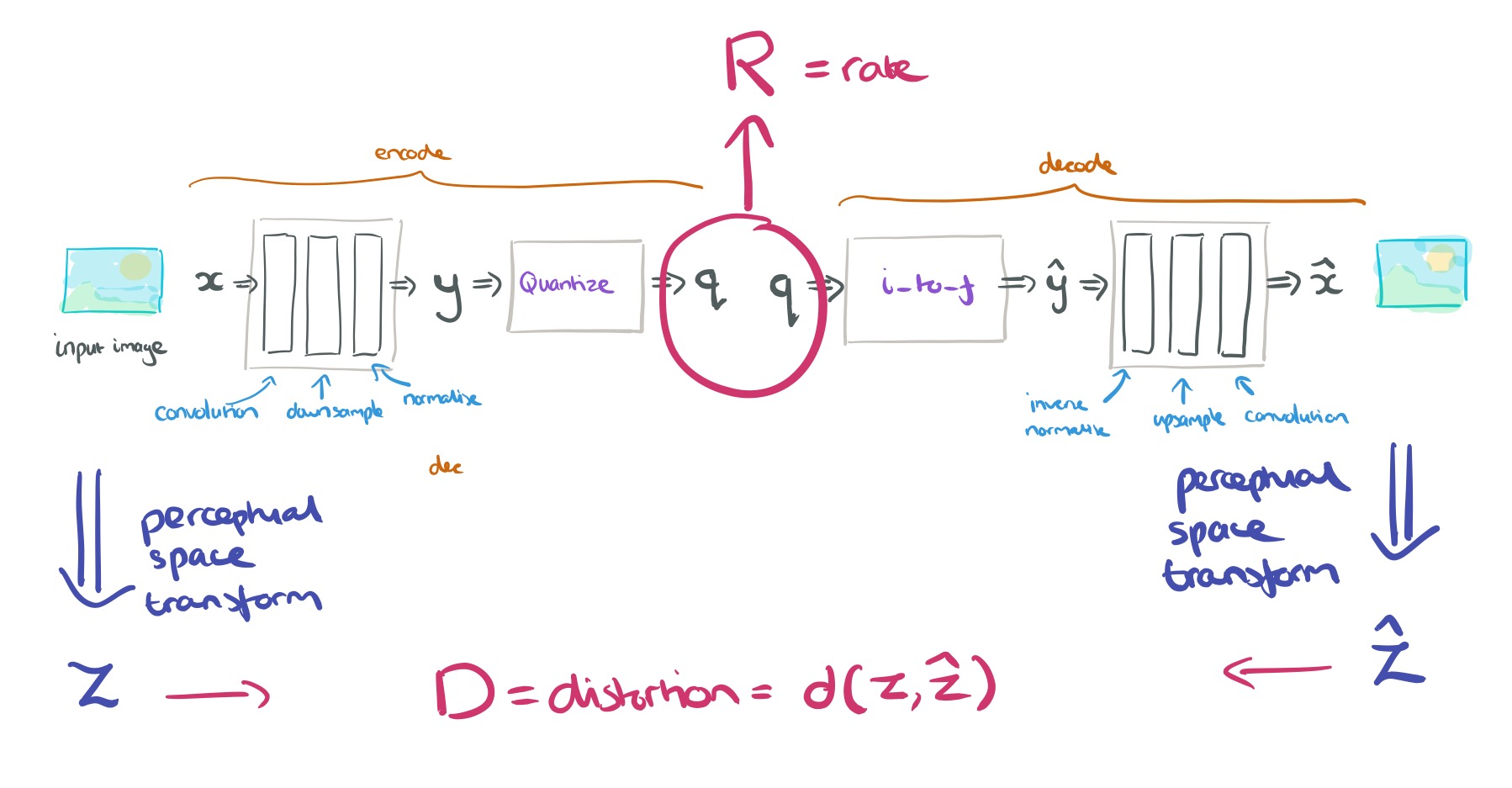 The system is trained end-to-end, and since we want to jointly optimise both rate and distortion, we set things up to optimise

is a weight controlling the relative importance of rate and distortion. 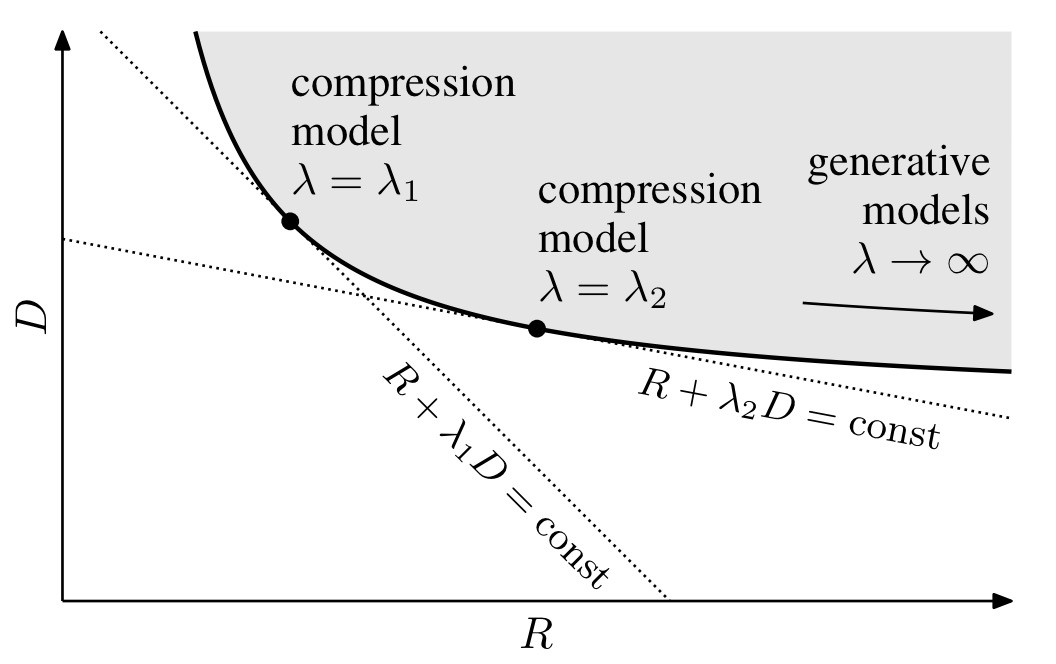 Inside the analysis transform

The analysis transform actually chains together three iterations (stages) of convolution, downsampling, and normalisation (GDN) as shown below: 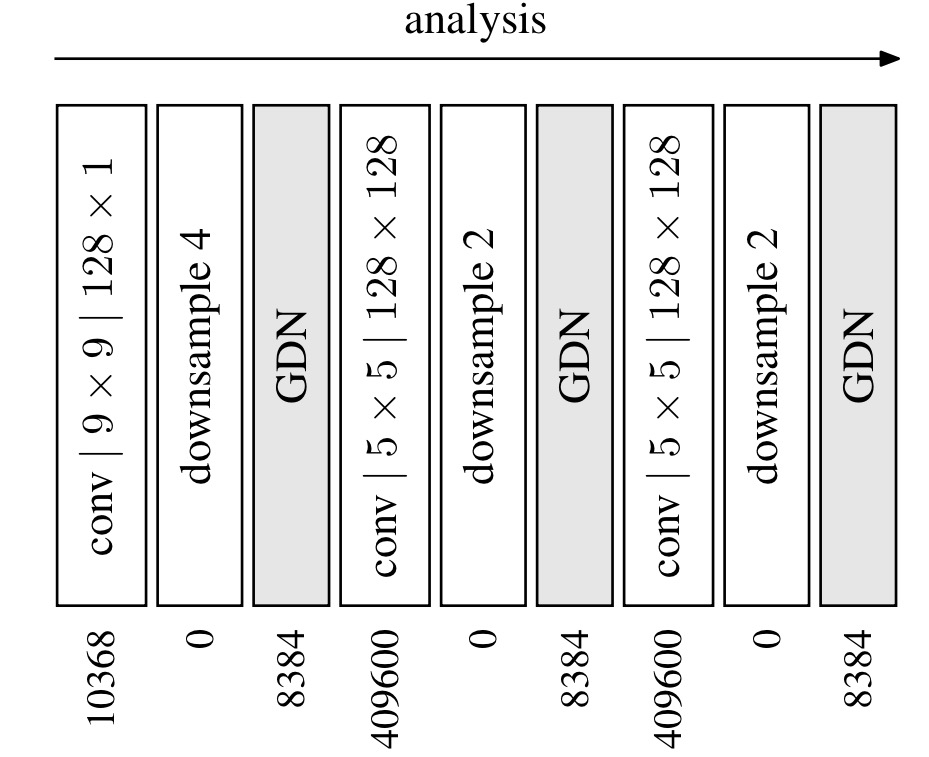 GDN stands for generalized divisive normalisation, “which has previously been shown to be highly efficient in Gaussianizing the local joint statistics of natural images.” Gaussianizing here means mapping the data onto a normal distribution. The normalisation operation looks like this, where

is the output of the downsampling step,corresponding to spatial location

Inside the synthesis transform 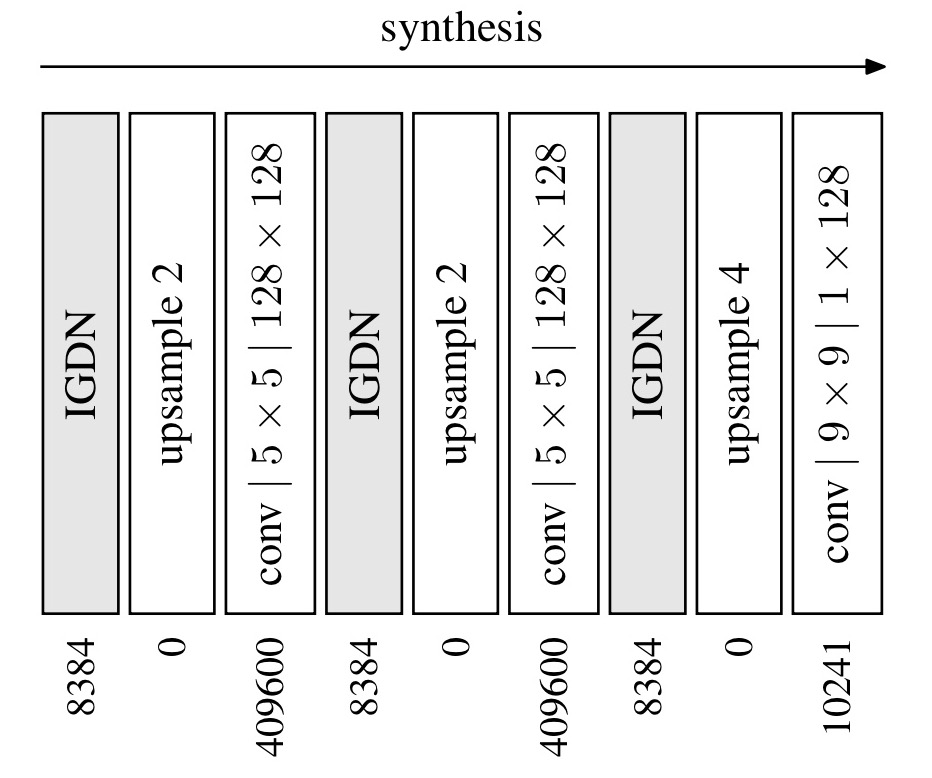 Here GDN is replaced by an approximate inverse the authors call IGDN.

Our objective is to minimize a weighted sum of the rate and distortion,

, over the parameters of the analysis and synthesis transforms and the entropy code, where

Since the actual rates achieved by an entropy code are only slightly larger than the entropy, the objective (loss) function can be defined directly in terms of entropy. Both the rate and distortion terms depend on quantized values, and the derivatives of the quantization function (i.e., rounding the nearest integer) are zero almost everywhere.

To allow optimization via stochastic gradient descent, we replace the quantizer with an additive i.i.d. uniform noise source

, which has the same width as the quantization bins (1).

The density function of 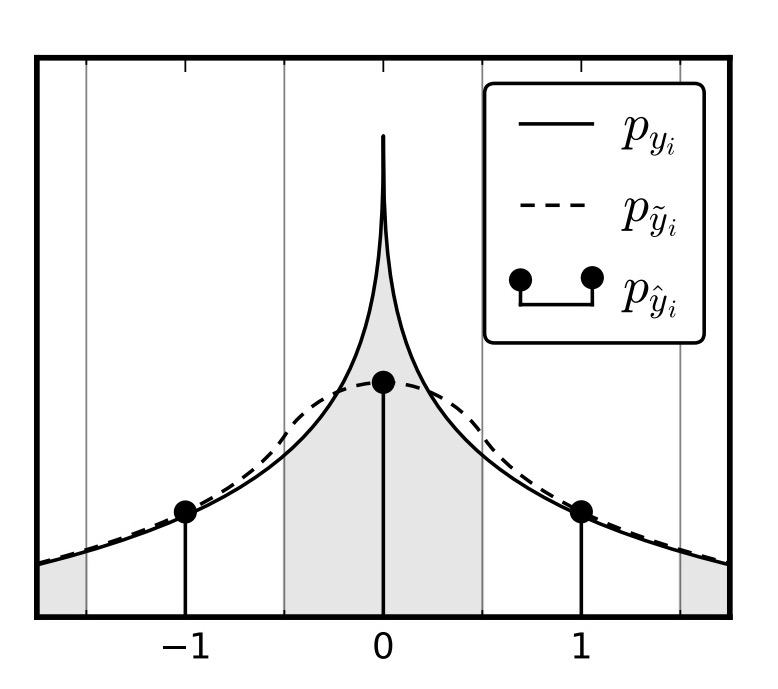 Training was performed over a subset of 6507 images from the ImageNet database, for a variety of

values. You can explore the results, comparing the JPEG, JPEG 2000 and images produced by the paper’s method, at http://www.cns.nyu.edu/~lcv/iclr2017/.

Here’s an example comparing the three approaches across each of three different image sizes: 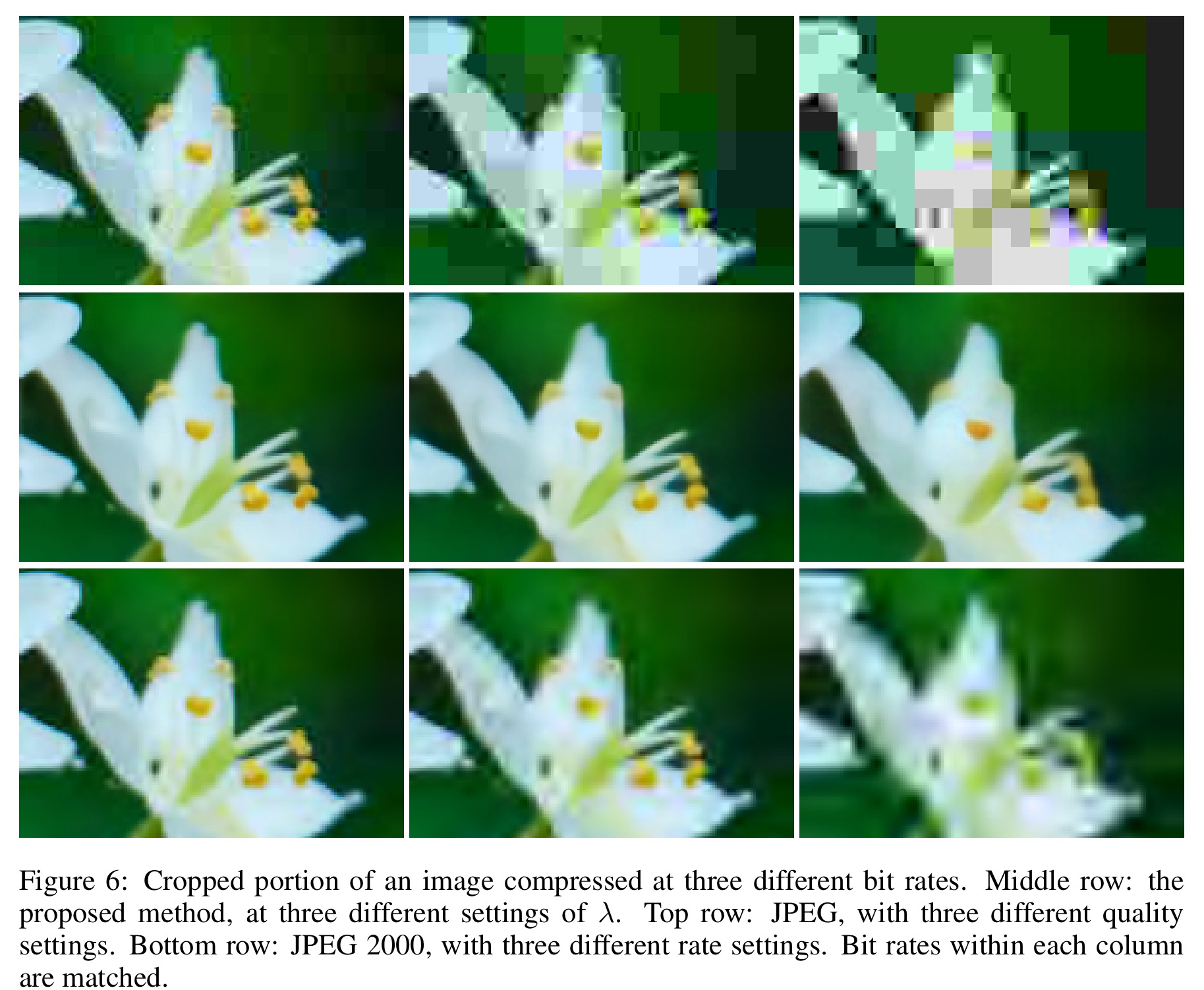 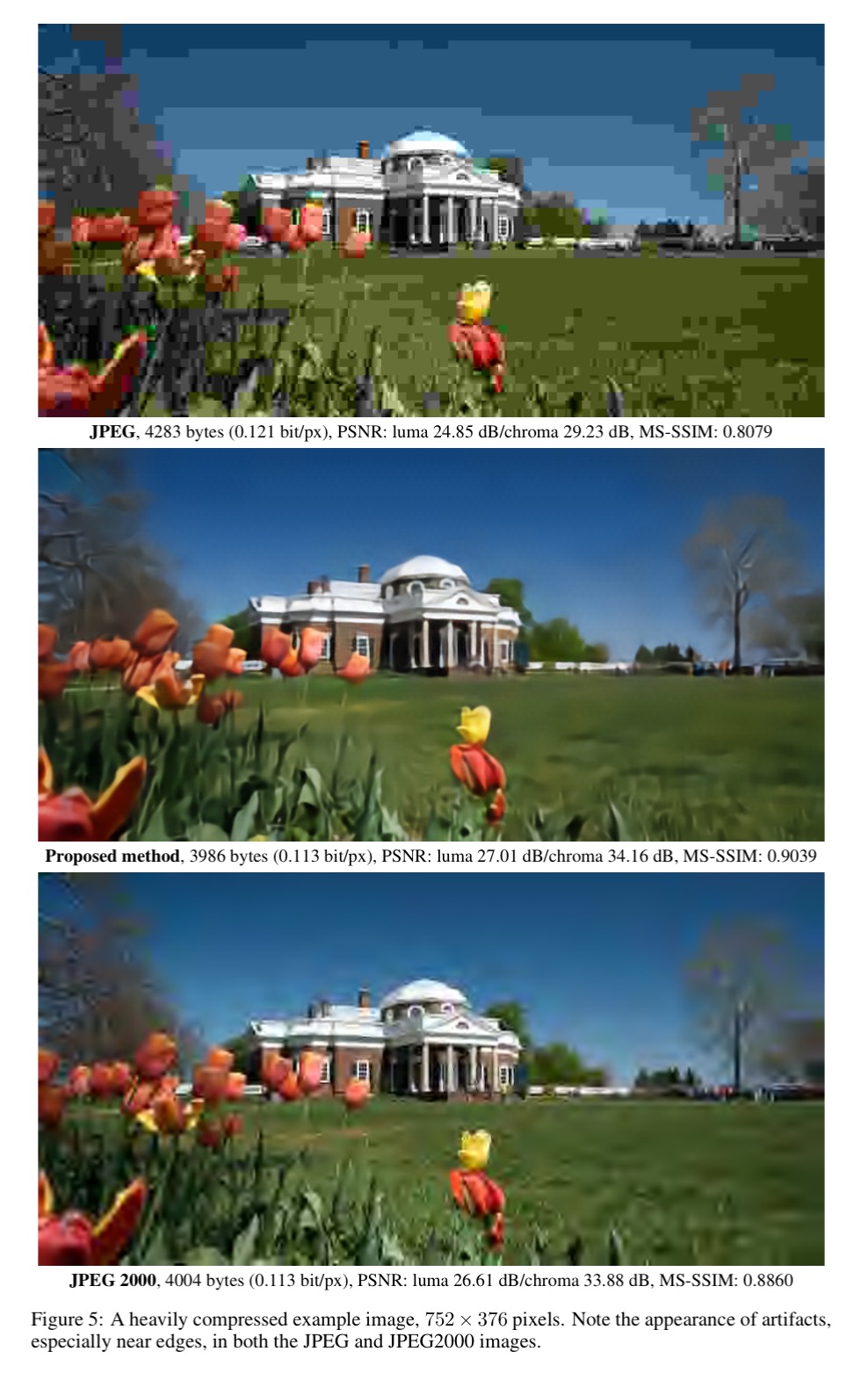 The image compressed with our method have less detail than the original (not shown, but available online), with fine texture and other patterns often eliminated altogether, but this is accomplished in a way that preserves the smoothness of contours and sharpness of many of the edges, giving them a natural appearance.

Remarkably, we find that the perceptual advantages of our method hold for all images tested, and at all bit rates… our method appears to progressively simplify contours and other image features, effectively concealing the underlying quantization of the representation.