Last time out we looked at continuous integration testing of machine learning models, but arguably even more important than the model is the data. Garbage in, garbage out.

In this paper we focus on the problem of validation the input data fed to ML pipelines. The importance of this problem is hard to overstate, especially for production pipelines. Irrespective of the ML algorithms used, data errors can adversely affect the quality of the generated model.

Breck et al. describe for us the data validation pipeline deployed in production at Google, “used by hundreds of product teams to continuously monitor and validate several petabytes of production data per day.” That’s trillions of training and serving examples per day, across more than 700 machine learning pipelines. More than enough to have accumulated some hard-won experience on what can go wrong and the kinds of safeguards it is useful to have in place!

The motivating example is based on an actual production outage at Google, and demonstrates a couple of the trickier issues: feedback loops caused by training on corrupted data, and distance between data providers and data consumers.

An ML model is trained daily on batches of data, with real queries from the previous day joined with labels to create the next day’s training data. Somewhere upstream, a data-fetching RPC call starts failing on a subset of the data, and returns -1 (error code) instead of the desired data value. The -1 error codes are propagated into the serving data and everything looks normal on the surface since -1 is a valid value for the int feature. The serving data eventually becomes training data, and the model quickly learns to predict -1 for the feature value. The model will now underperform for the affected slice of data.

This example illustrates a common setup where the generation (and ownership!) of the data is decoupled from the ML pipeline… a lack of visibility by the ML pipeline into this data generation logic except through side effects (e.g., the fact that -1 became more common on a slice of the data) makes detecting such slice-specific problems significantly harder.

Errors caused by bugs in code are common, and tend to be different than that type of errors commonly considered in the data cleaning literature.

Data validation at Google is an integral part of machine learning pipelines. 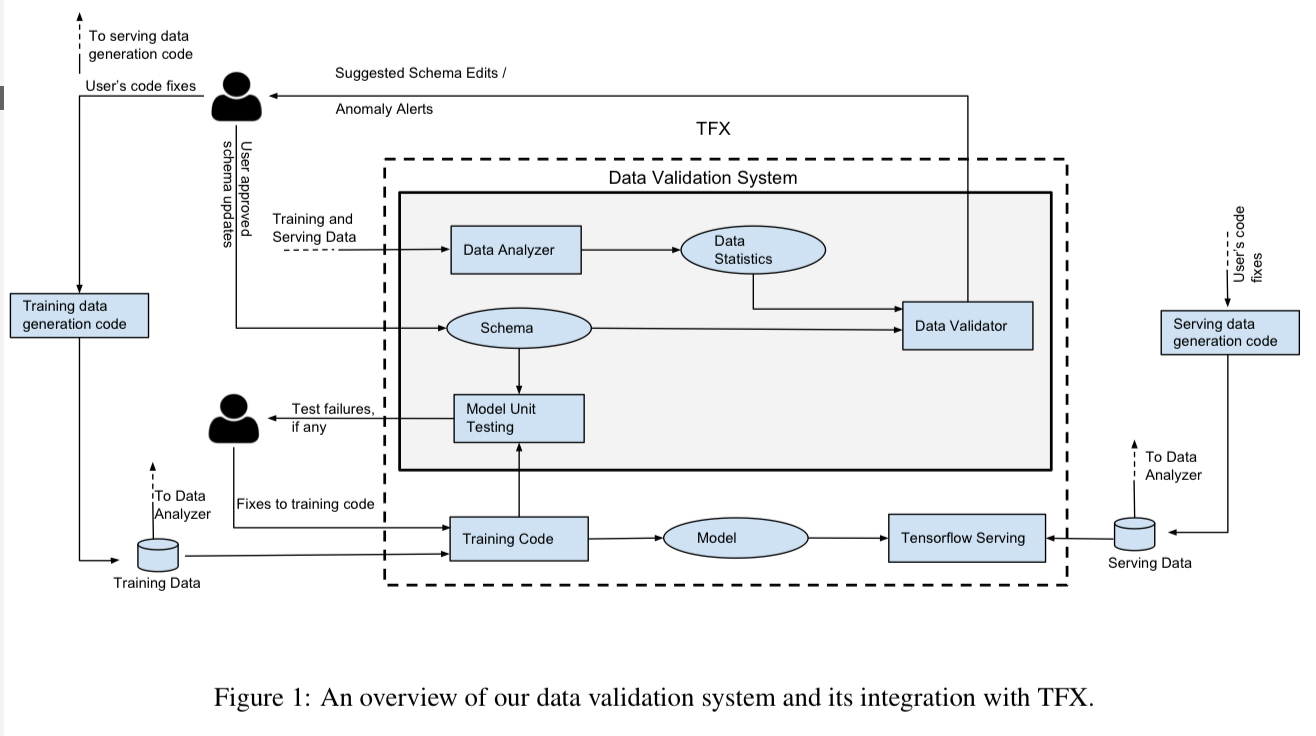 Pipelines typically work in a continuous fashion with the arrival of a new batch of data triggering a new run. The pipeline ingests the training data, validates it, sends it to a training algorithm to generate a model, and then pushes the trained model to a serving infrastructure for inference.

The data validation stage has three main components: the data analyzer computes statistics over the new data batch, the data validator checks properties of the data against a schema, and the model unit tester looks for errors in the training code using synthetic data (schema-led fuzzing).

Testing one batch of data

Given a single batch of incoming data, the first question to answer is whether or not it contains any anomalies. If so, on-call will be alerted to kick-start an investigation.

The expected data characteristics are captured by a schema: 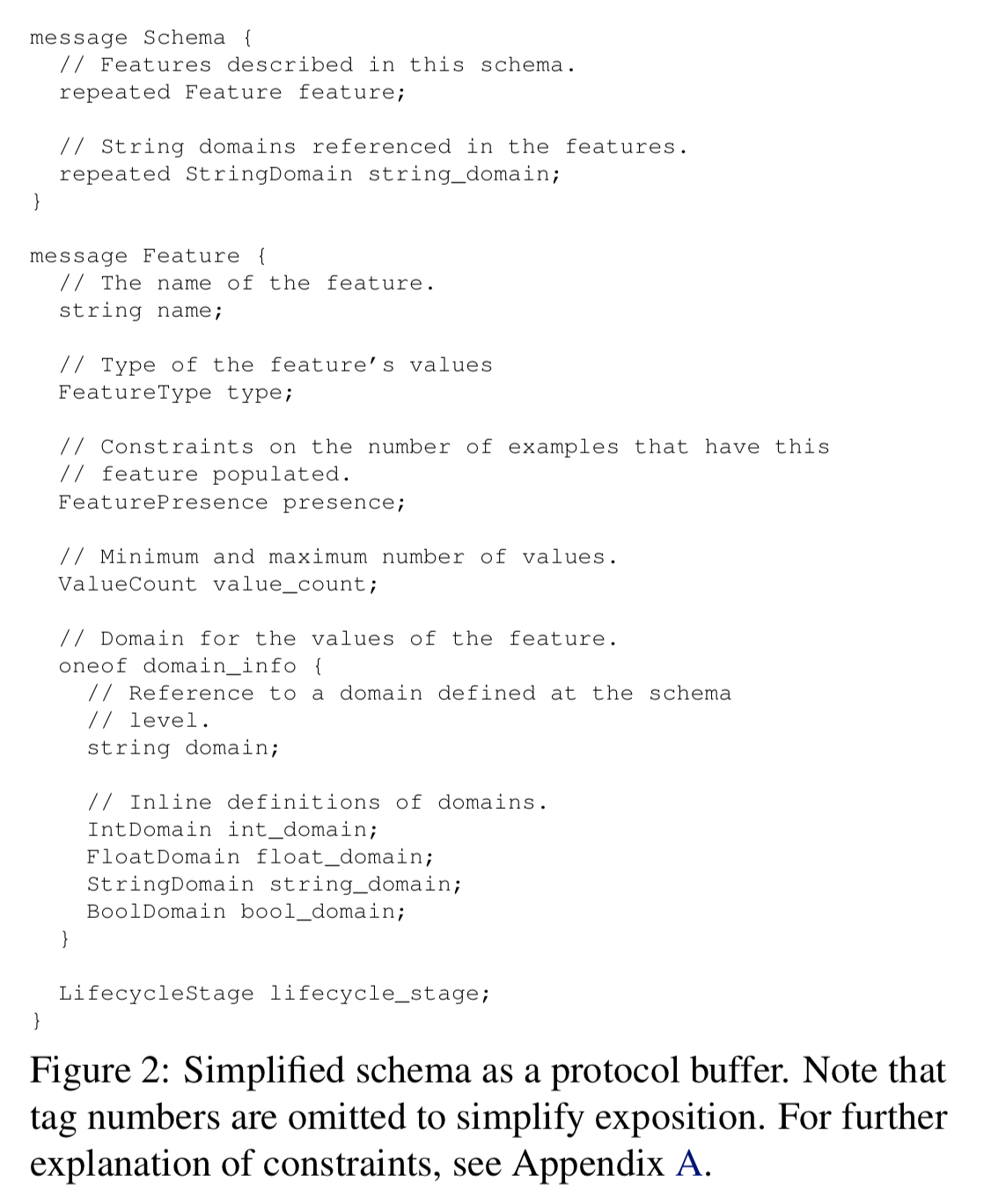 Constraints specified in the schema can be used to ensure that a certain feature is present (for example), or contains one of an expected set of values, and so on.

An initial version of the schema is synthesised automatically, after which it is version controlled and updated by the engineers. With an initial schema in place, the data validator recommends updates as new data is ingested and analysed. For example, given the training data on the left in the figure below, the schema on the right is derived. 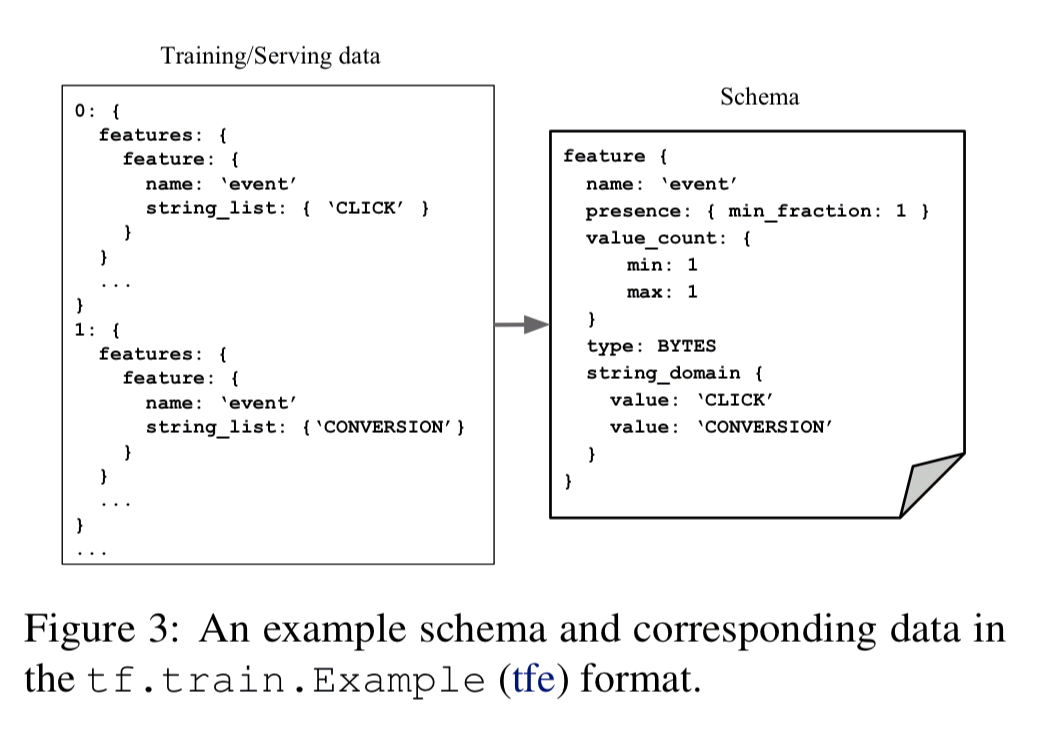 If some data arrives with a previously unseen value for event, then the user will be prompted to consider adding the new value to the domain.

We expect owners of pipelines to treat the schema as a production asset at par with source code and adopt best practices for reviewing, versioning, and maintaining the schema.

Some anomalies only show up when comparing data across different batches, for example, skew between training and serving data.

Google’s ML serving infrastructure logs samples of the serving data and this is imported back into the training pipeline where the data validator uses it to detect skew.

To detect feature skew, the validate does a key-join between corresponding batches of training and serving data followed by a feature-wise comparison.

To detect distribution skew the distance between the training and serving distributions is used. Some distance is expected, but if it is too high an alert will be generated. There are classic distance measures such as KL-divergence and cosine similarity, but product teams had a hard time understanding what they really meant and hence how to tune thresholds.

In the end Google settled on using as a distance measure the largest change in probability for any single value in the two distributions. This is easy to understand and configure (e.g., “allow changes of up to 1% for each value”), and each alert comes with a ‘culprit’ value that can be used to start an investigation. Going back to our motivating example, the highest change in frequency would be associated with -1.

…[training] code is mostly a black box for the remaining parts of the platform, including the data-validation system, and can perform arbitrary computations over the data. As we explain below, these computations may make assumptions that do not agree with the data and cause serious errors that propagate through the ML infrastructure.

For example, the training code may apply a logarithm over a number feature, making the implicit assumption that the value will always be positive. These assumptions may well not be present in the schema (that just specifies an integer feature). To flush these out, the schema is used to generate synthetic inputs in a manner similar to fuzz testing, and the generated data is then used to drive a few iterations of the training code.

In practice, we found that fuzz-testing can trigger common errors in the training code even with a modest number of randomly-generated examples (e.g., in the 100s). In fact, it has worked so well that we have packaged this type of testing as a unit test over training algorithms, and included the test in the standard templates of our ML platform.

Experiences in production at Google

Users do take ownership of their schemas after the initial generation, but the number of edits required is typically small: 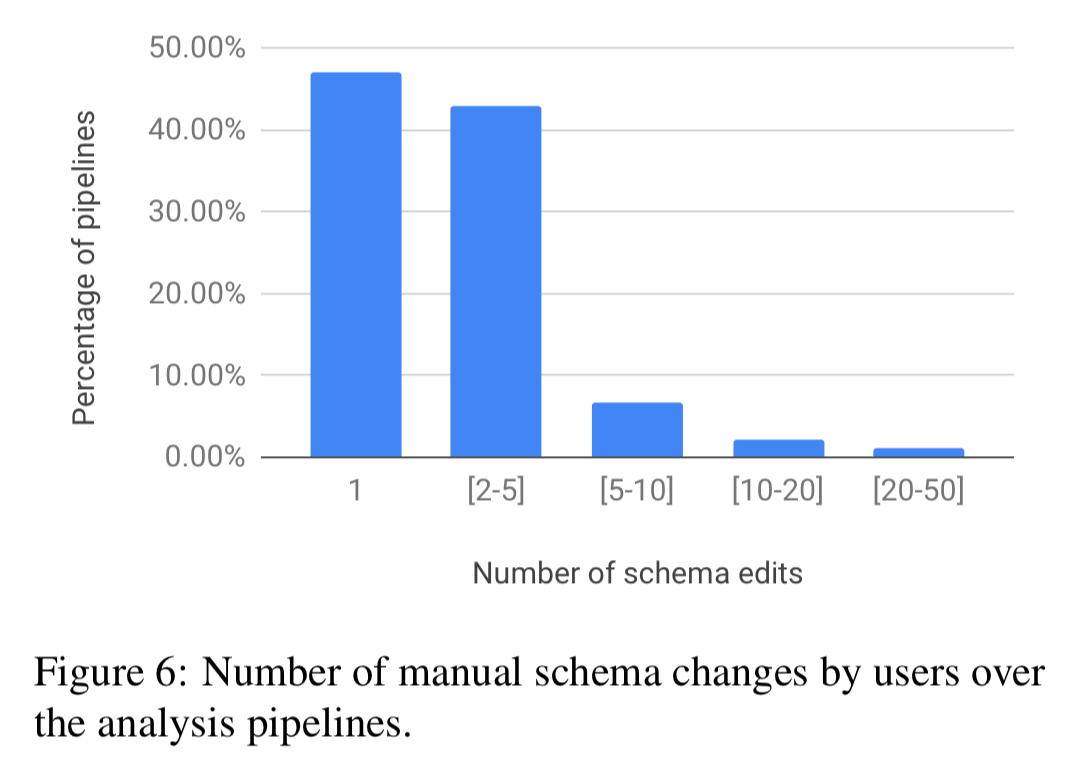 …anecdotal evidence from some teams suggest a mental shift towards a data-centric view of ML, where the schema is not solely used for data validation but also provides a way to document new features that are used in the pipeline and thus disseminate information across the members of the team.

The following table shows the kinds of anomalies detected in a 30-day period, and whether or not the teams took any action as a result. Product teams fix the majority of detected anomalies. 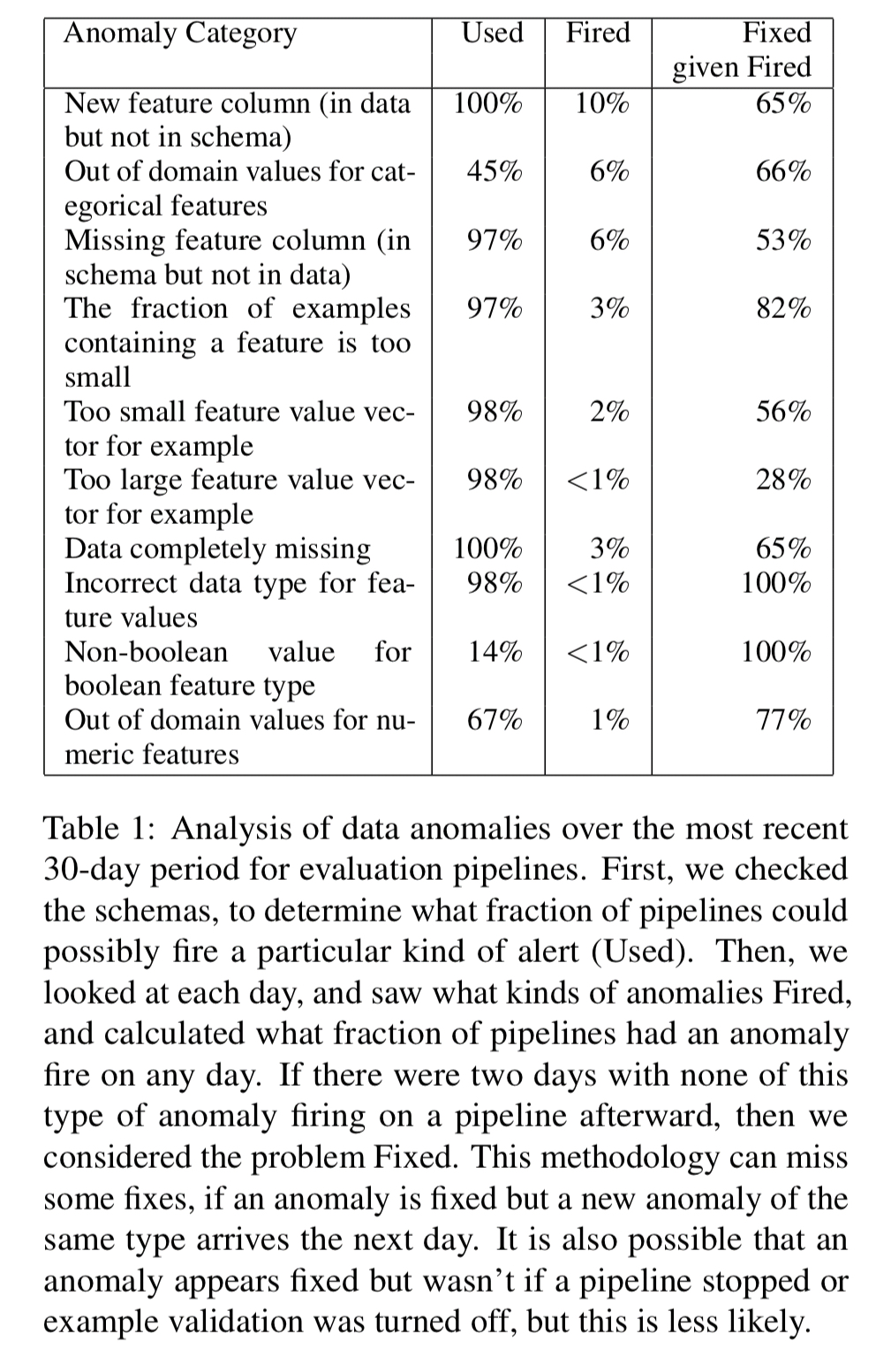 Furthermore, 6% of all model unit testing runs find some kind of error, indicating that either training code had incorrect assumptions or the schema was underspecified.

Before we go, I just wanted to give a quick call out to the related work section in the paper (§7) which contains a very useful summary of works in the data validation, monitoring, and cleaning space.

Google have made their data validation library available in OSS at https://github.com/tensorflow/data-validation.