Data lineage is useful in lots of different applications; this paper uses as its main example interactive visualisation systems. This domain requires fast answers to queries and is typically dominated by hand-written implementations. Consider the two views in the figure below. When the user selects a set of marks in

, marks derived from the same records are highlighted in 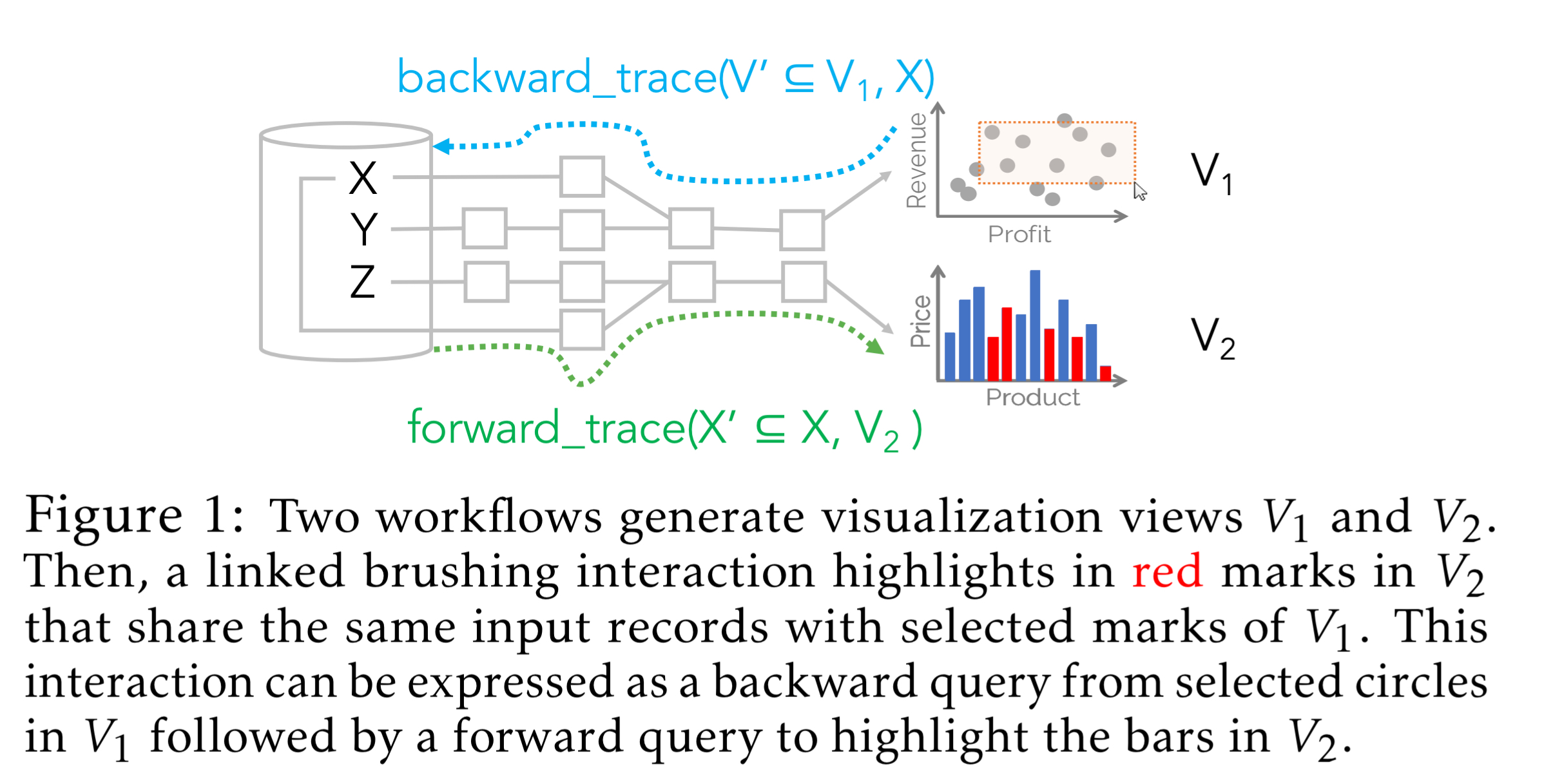 A typical visualisation system implements this manually, but it can equally be viewed as a backward lineage query from the selection points in

, followed by a forward lineage query from the resulting input records to

(See ‘Explaining outputs in modern data analytics’ which we looked at last year for an introduction to lineage and provenance principles. Chotia et al. use a shadow dataflow graph mapping the original computation but flowing in the opposite direction…).

As data processing engines become faster, an important question —and the main focus of this paper— is whether it is possible to achieve the best of both worlds: negligible lineage capture overhead, as well as fast lineage query execution.

Smoke employs four central design principles to try and pull off this trick. 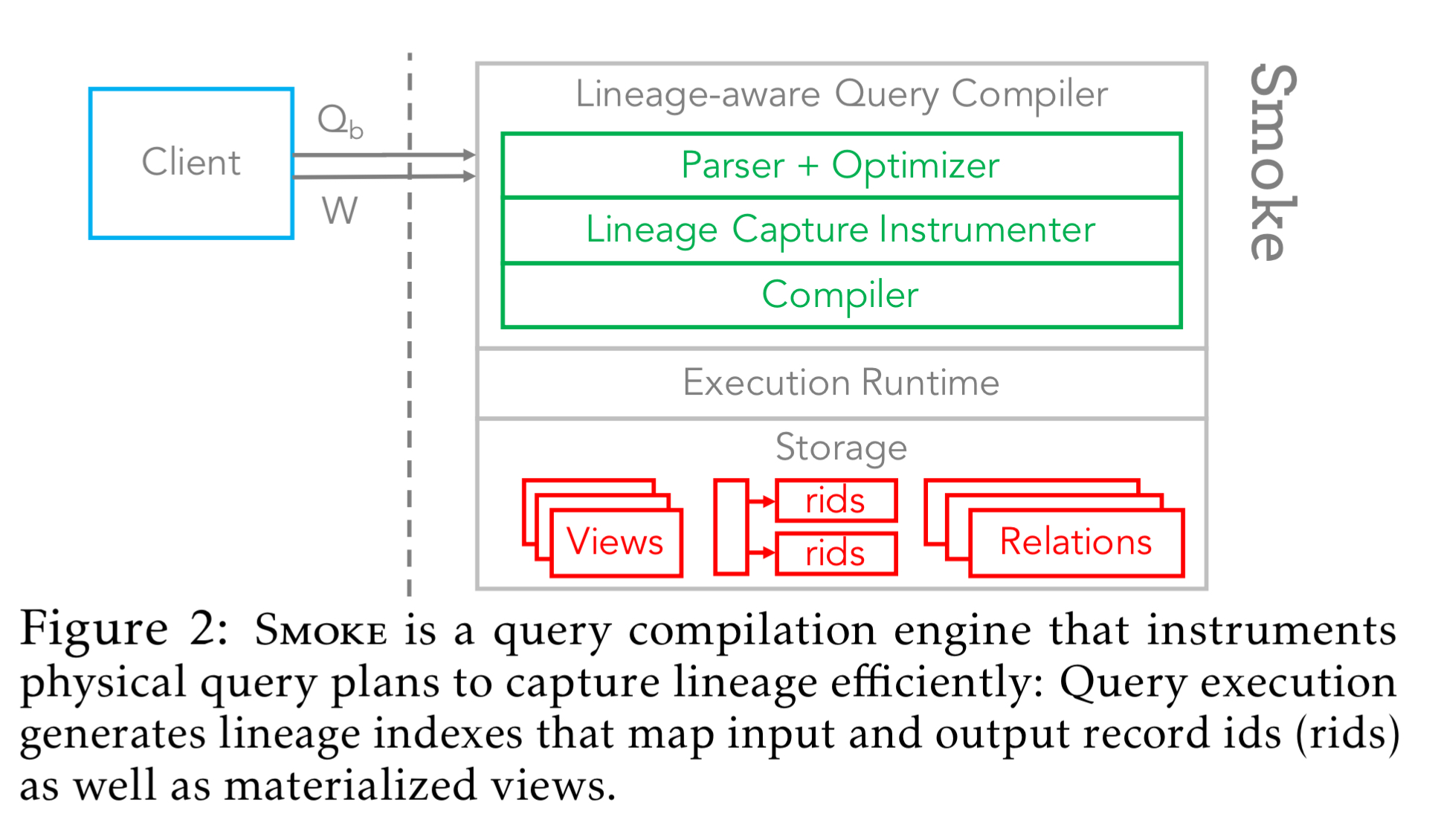 Smoke uses read- and write-efficient index structures based on row ids to capture lineage information. 1-N relationships (between input and output tuples) are represented as inverted indexes. The index’s ith entry corresponds to the ith output group, and points to a row id array containing the ids of all input records that belong to the group. 1-1 relationships between input and output are represented as a single array.

These indices are populated through a tight integration of lineage capture and relation operator logic to avoid additional API calls, and to facilitate co-optimisation. There are two basic strategies depending on the operator and circumstances: defer and inject.

Inject strategies incur the full cost of index generation during base query execution, whereas defer strategies defer (portions of) the lineage capture until after the operation execution.

Consider selection: both forward and backward lineage capture use row-id arrays, with the forward one pre-allocated based on the cardinality of the input relation. While iterating over the relation evaluating the predicate, the inject strategy adds two counters to track the row ids of the current input and output and uses these to update the indices when an output row is emitted. There is no defer strategy for selection, because it is strictly inferior to inject.

As another example consider hash joins. Smoke will generate both backward row id arrays, and forward row-id indexes. Under the inject strategy a build phase augments each hash table entry with a row id array containing the input row ids for that entry’s join key. The probe phase tracks the row id for each output record and populates the forward and backward indexes. One drawback of this strategy is that we might trigger multiple re-allocations (growing the size) of the forward indexes if an input record has many matches.

The defer strategy for hash joins takes advantage of the fact that we know the size of the forward indexes after the probe phase. The build phase maintains an additional output row id list, storing the first output record for each match (output records are emitted contiguously). After the probe phase, the forward and backward indexes can be pre-allocated and populated in a final scan of the hash table.

For multi-operator plans Smoke propagates lineage information through plan execution so that only a single set of lineage indexes connecting the input and final output relations are emitted. It also takes advantage of pipelines (that merge multiple operators into a single pipeline as part of normal query execution) to eliminate intermediate lineage materialization points where possible.

When the set of lineage queries is known in advance, Smoke can go further than the baseline lineage capture describe above and also apply instrumentation pruning and optimisation push-down.

Instrumentation pruning disables lineage capture for lineage indexes that will not be used by the workload. Lineage queries that apply summarisation / aggregation before presenting results provide an opportunity to push-down optimisations. For example, selection push-down when using a static predicate, and partitioning of index arrays by predicate attributes for dynamic selections. Group-by aggregation can also be pushed down into lineage capture. 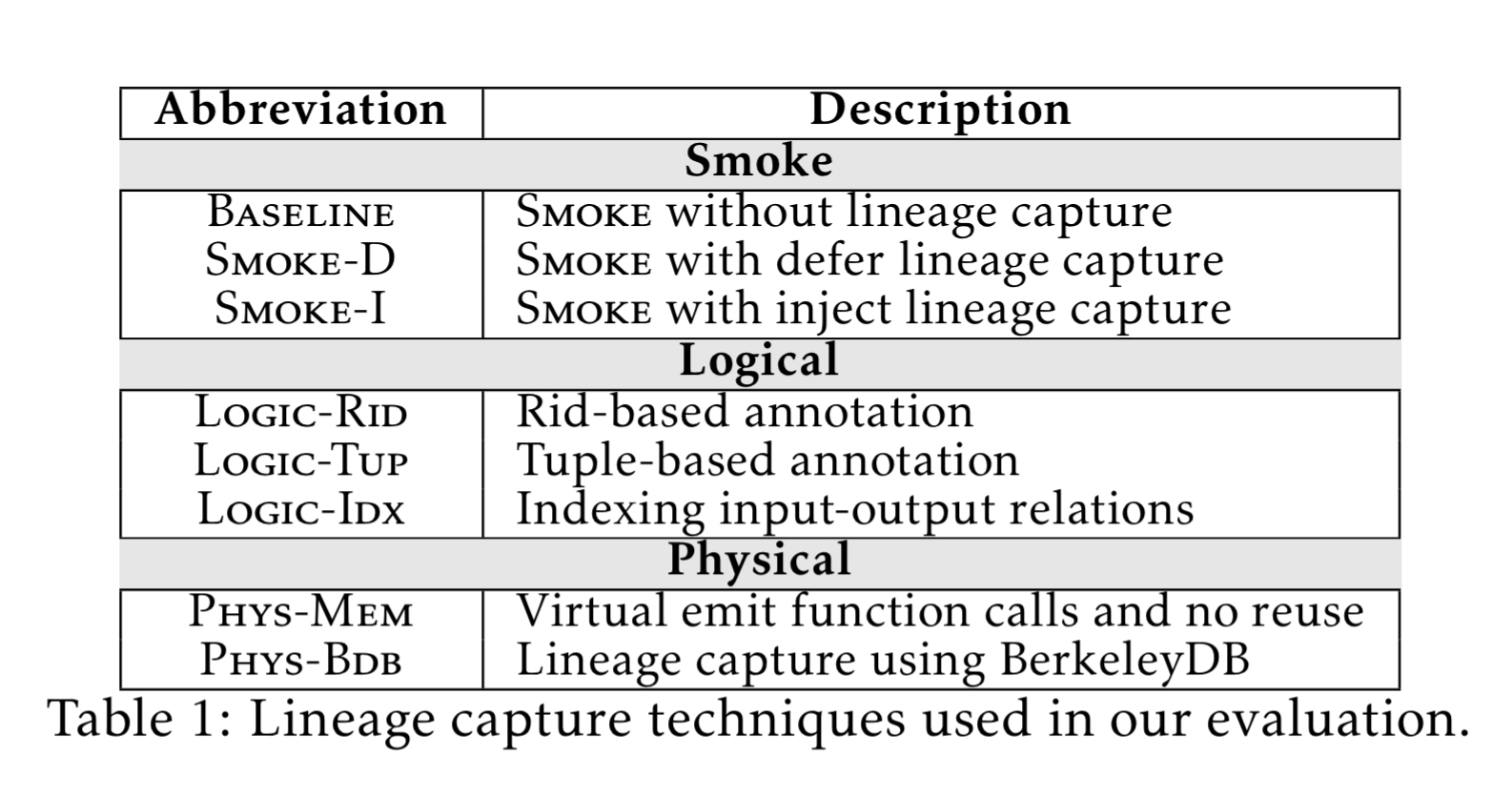 Smoke’s lineage capture techniques outperform both logical and physical approaches by up to two orders of magnitude. For example: 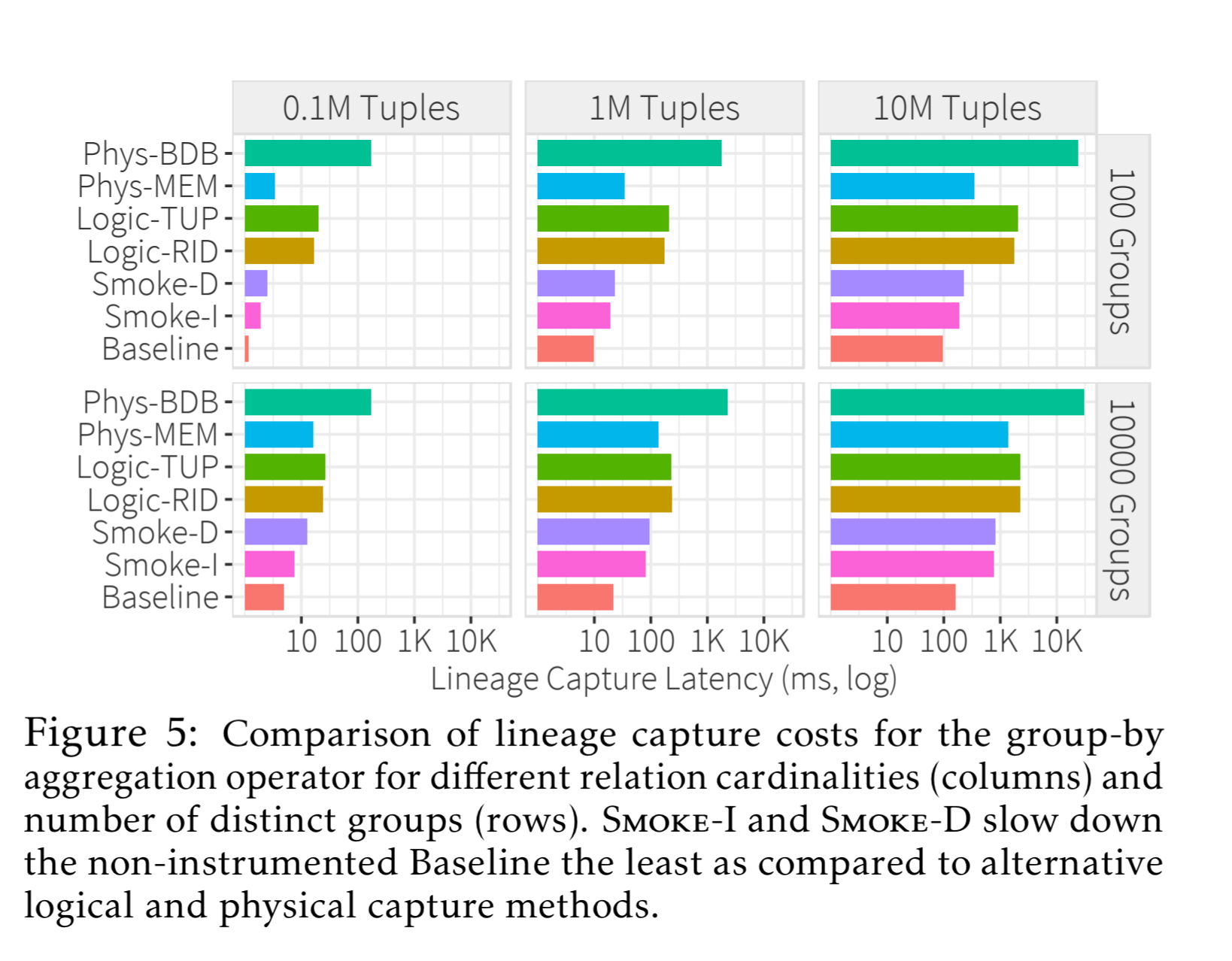 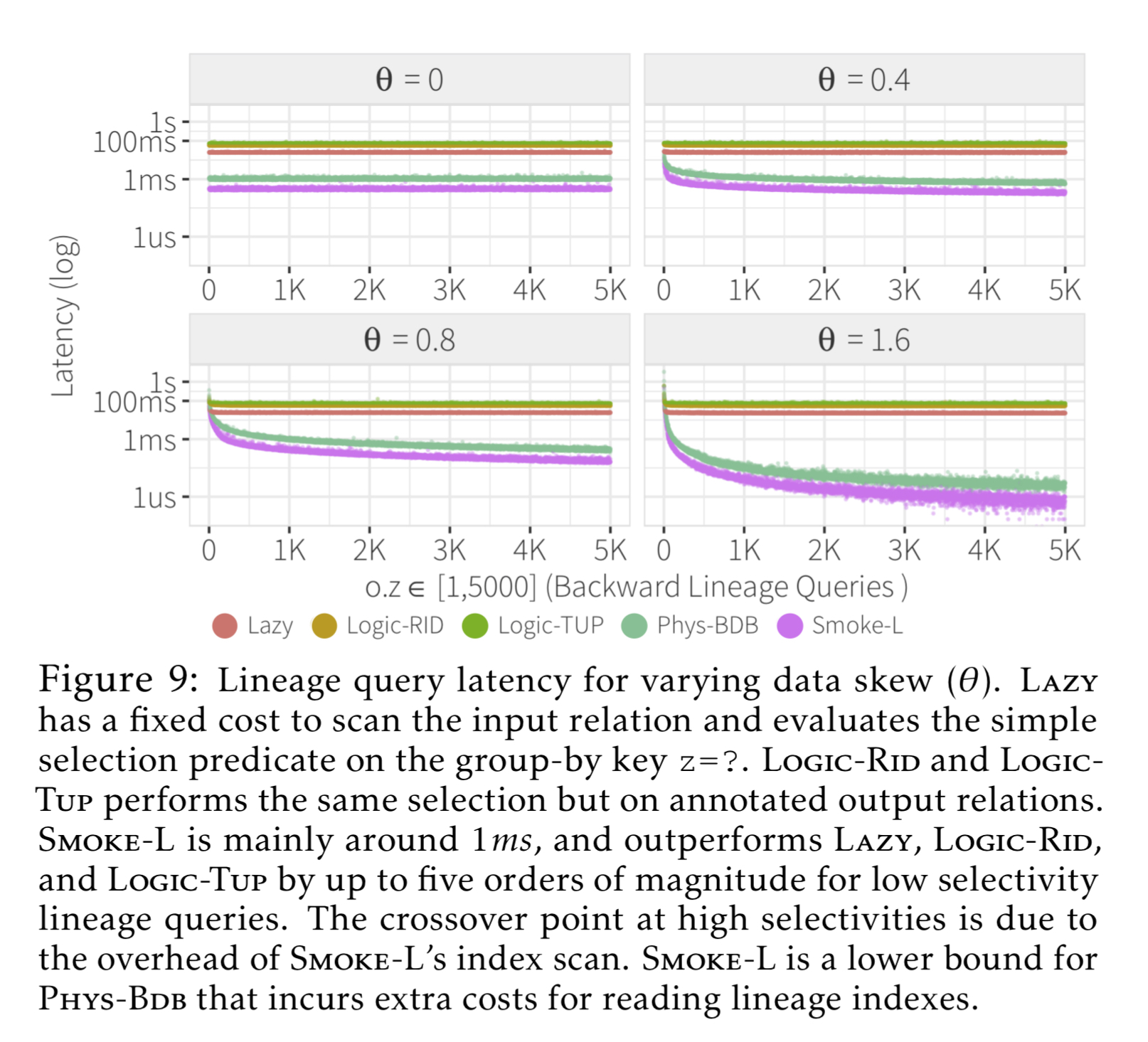 The two real-world applications used in the evaluation were Crossfilter visualisation and data profiling with UGuide. The results show that :