For the last couple of posts we’ve been looking at Snorkel and BabbleLabble which both depend on data programming – the ability to intelligently combine the outputs of a set of labelling functions. The core of data programming is developed in two papers, ‘Data programming: creating large training sets, quickly’ (Ratner 2016) and today’s paper choice, ‘Learning the structure of generative models without labeled data’ (Bach 2017).

The original data programming paper works explicitly with input pairs (x,y) (e.g. the chemical and disease word pairs we saw from the disease task in Snorkel) which (for me at least) confuses the presentation a little compared to the latter ICML paper which just assumes inputs

(which could of course have pair structure, but we don’t care about that at this level of detail). Also in the original paper dependencies between labelling functions are explicitly specified by end users (as one of four types: similar, fixing, reinforcing, and exclusive) and built into a factor graph. In the ICML paper dependencies are learned. So I’m going to work mostly from ‘Learning the structure of generative models without labeled data’ in this post, and concentrate just on the core development of the theory.

A generative probabilistic model for accuracy estimation under independence

We have input data points

that is its true label. We don’t know

Each labelling functions takes as input an data point

and produces as output a value

which is either true, abstain, or false (

). (The approach generalises to the multi-class case).

). We can model the accuracy of this labelling function with

. We’ll say the accuracy function has value 1 if

correctly labels an example, and 0 otherwise. In our setting this can be succinctly expressed as:

The accuracy function itself is controlled by some parameter

modelling how accurate each labelling function is.

labelling functions, we have a conditionally independent model

is the set of true labels

modelling the accuracy of the labelling functions can now be estimated by minimising the negative log marginal likelihood of failing to give the correct label (guessing a wrong label, or abstaining).

We can do this using standard stochastic gradient descent, where the gradient for parameter

is given by the number of examples

correctly labels minus the number of examples it fails to label correctly.

The conditionally independent model is a common assumption, and using a more sophisticated generative model currently requires users to specify its structure.

As we know from the Snorkel paper, unfortunately labelling functions are often not independent.

To address this issue, we generalize the conditionally independent model as a factor graph with additional dependencies, including higher-order factors that connect multiple labeling function outputs for each data point

Suppose there is a set

. This gives us a general model of the form

and we want to learn the parameters

Estimating the structure of the distribution

is challenging because Y is latent; we never observe its value, even during training. We must therefore work with the marginal likelihood

. Learning the parameters of the generative model requires Gibbs sampling to estimate gradients. As the number of possible dependencies increases at least quadratically in the number of labeling functions, this heavyweight approach to learning does not scale.

By conditioning on all other labeling functions in each term…, we ensue that the gradient can be computed in polynomial time with respect to the number of labeling functions, data points, and possible dependencies; without requiring any sampling or variational approximations.

It all comes together in the following algorithm: 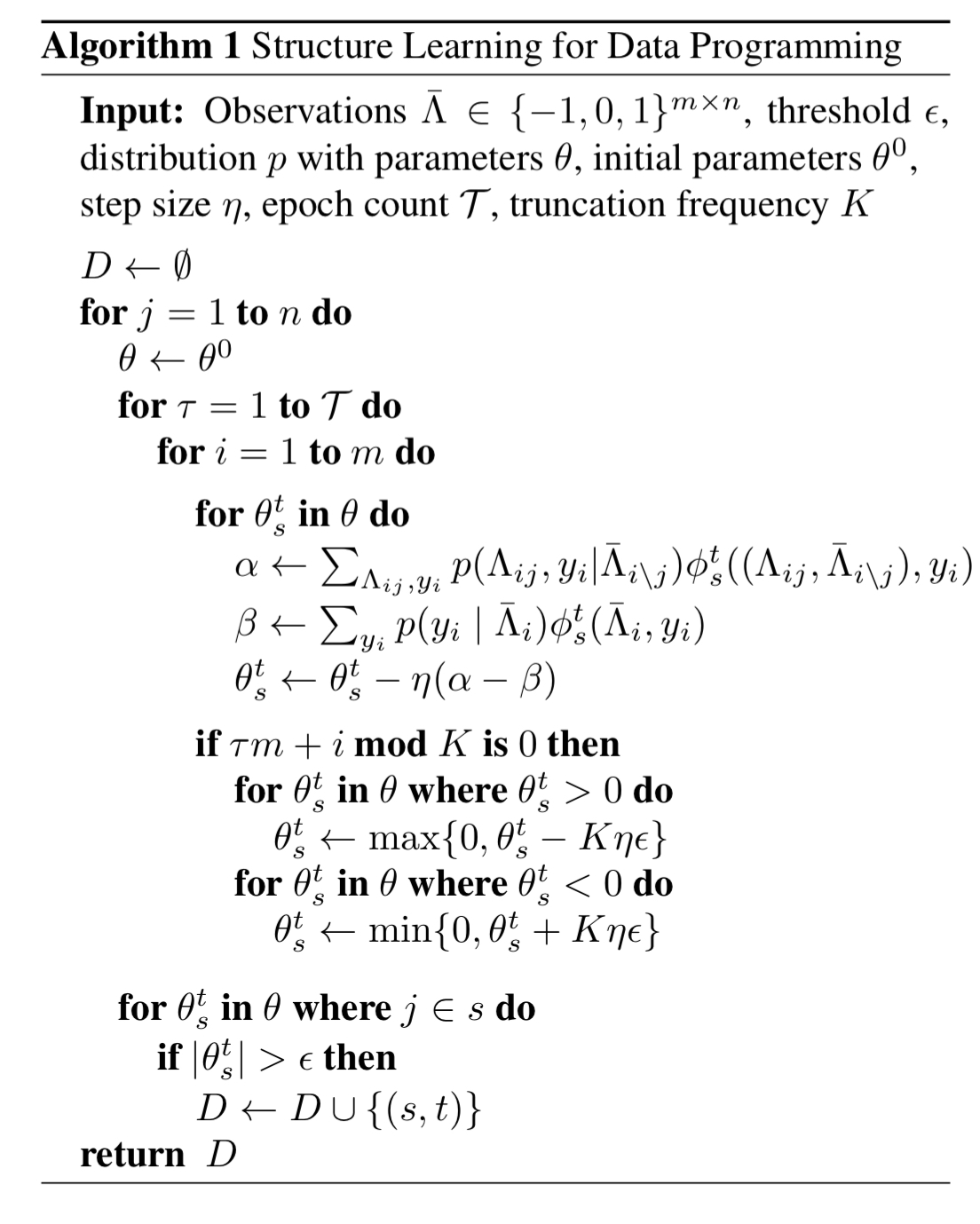 controls the threshold and regularization strength and requires tuning. For the other parameters the authors fix these at step size =

Assuming that there exist some set of parameters which can capture the true dependencies within the model we are using, and that all non-zero parameters are bounded away from zero (have at least a minimum magnitude

), then we can uncover the exact dependency structure with probability at least

is the maximum number of possible dependencies a single labelling function (or true label) can be involved in, and

– see eqn 7 in section 4 of the paper for the official definition). 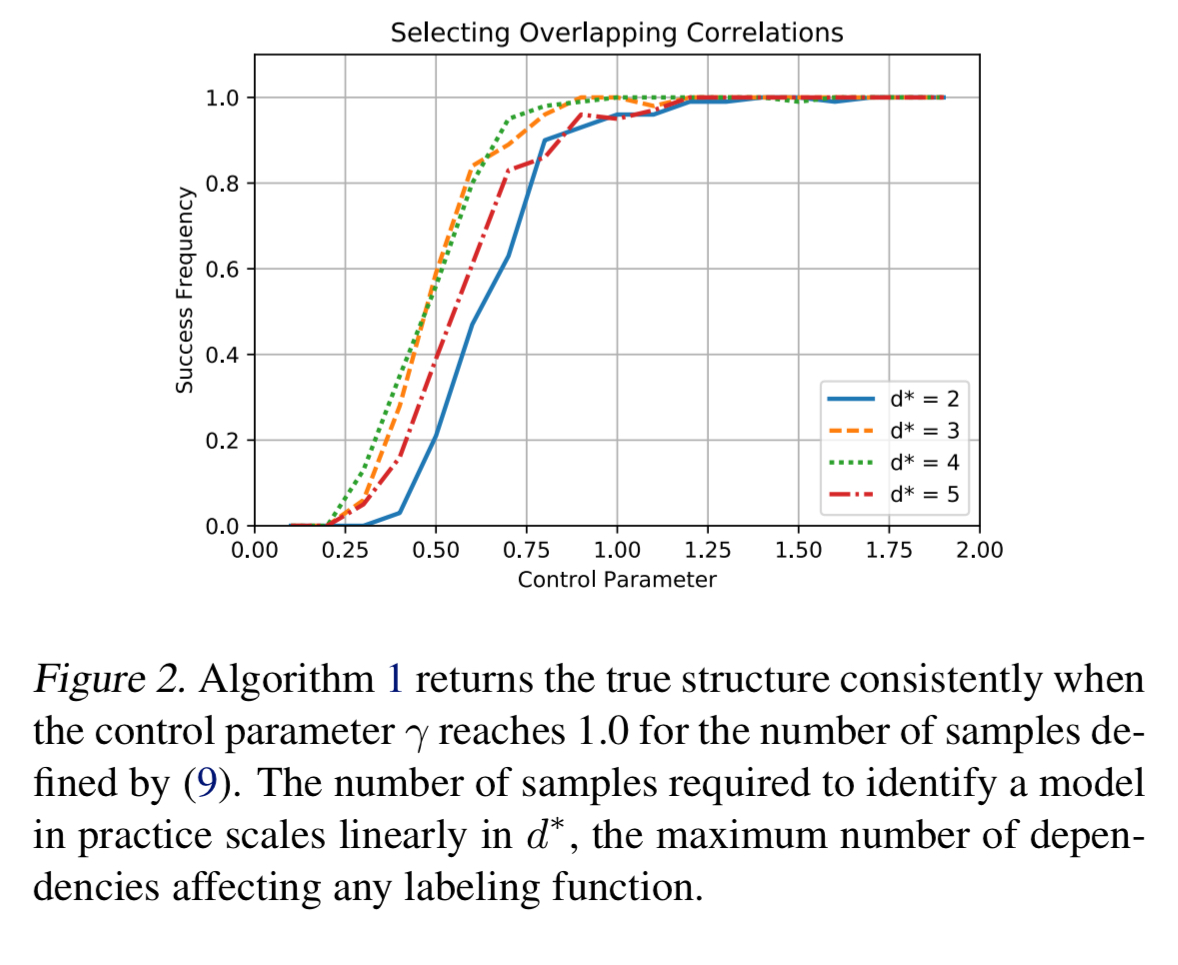 Compared to estimating structures via parameter learning over all possible dependencies, algorithm one is 100x faster and selects only 1/4 of the extraneous correlations. 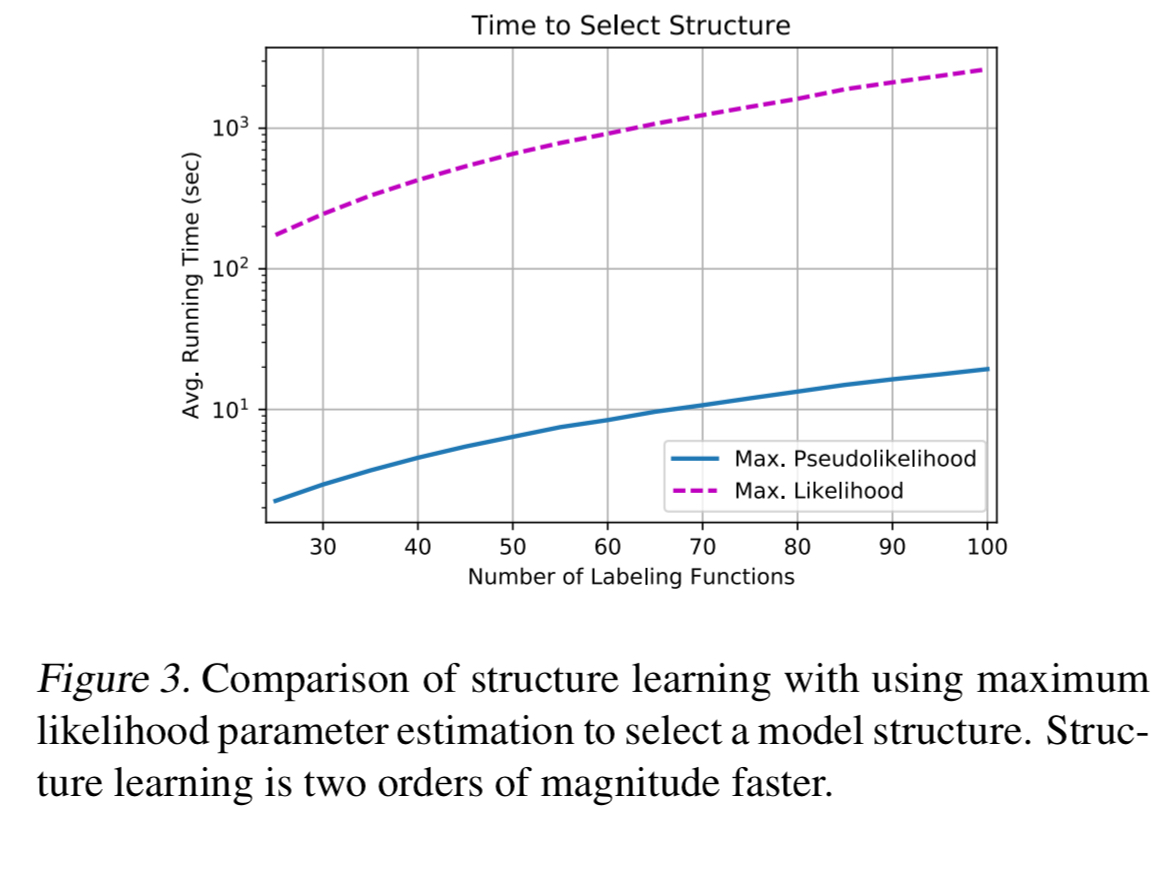