The first thing that strikes you about this paper is the long list of authors from multiple different establishments. That’s because it’s actually a study of 101 different fail-slow hardware incidents collected across large-scale cluster deployments in 12 different institutions.

Last year we looked at ‘Gray failure: the Achilles’ heel of cloud-scale systems,’ in which partial failures and system components running in degraded mode were revealed to be involved in many production incidents, and difficult to detect and diagnose with today’s systems. In ‘Fail-slow at scale’ we have a catalog of ways in which hardware has been shown to run in degraded mode, causing all sorts of problems. Fail-slow hardware, like file system faults and network partitions, should be added to the list of things that occur much more frequently than we’d like to think, and cause a lot of damage when they do occur.

This paper highlights an under-studied “new” failure type: fail-slow hardware, hardware that is still running and functional but in a degraded mode, slower than its expected performance. We found that all major hardware components can exhibit fail-slow faults.

These faults may be comparatively rare, but they can trigger chains of cascading events, resulting visible failures some distance from the original cause. Perhaps because of this, and because the partial failures are often deliberately masked in the hardware without enough metrics to surface them, troubleshooting fail-slow hardware based incidents can be very time-consuming:

The fail-slow hardware incidents in our report took hours or even months to detect (pinpoint). More specifically, 1% of the cases are detected in minutes, 13% in hours, 13% in days, 11% in weeks, and 17% in months (and unknown time in 45%).

One of the conclusions is that many modern deployed systems do not anticipate this failure mode. The authors offer a set of suggestions to hardware vendors, operators, and systems designers to improve the state of affairs.

… we strongly believe that injecting root causes reported in this paper will reveal many flaws in existing systems. Furthermore, all forms of fail-slow hardware such as slow NIC’s, switches, disks, SSD, NVDIMM, and CPUs need to be exercised as they lead to differrent symptoms. The challenge is then to build future systems that enable various fail-slow behaviors to be injected easily.

Let’s now take a look at some of the characteristics and causes of fail-slow incidents.

There can be a variety of root causes — these can be internal to the hardware component (for example, device wear or firmware issues), or external (for example, configuration, environment, temperature or power issues). 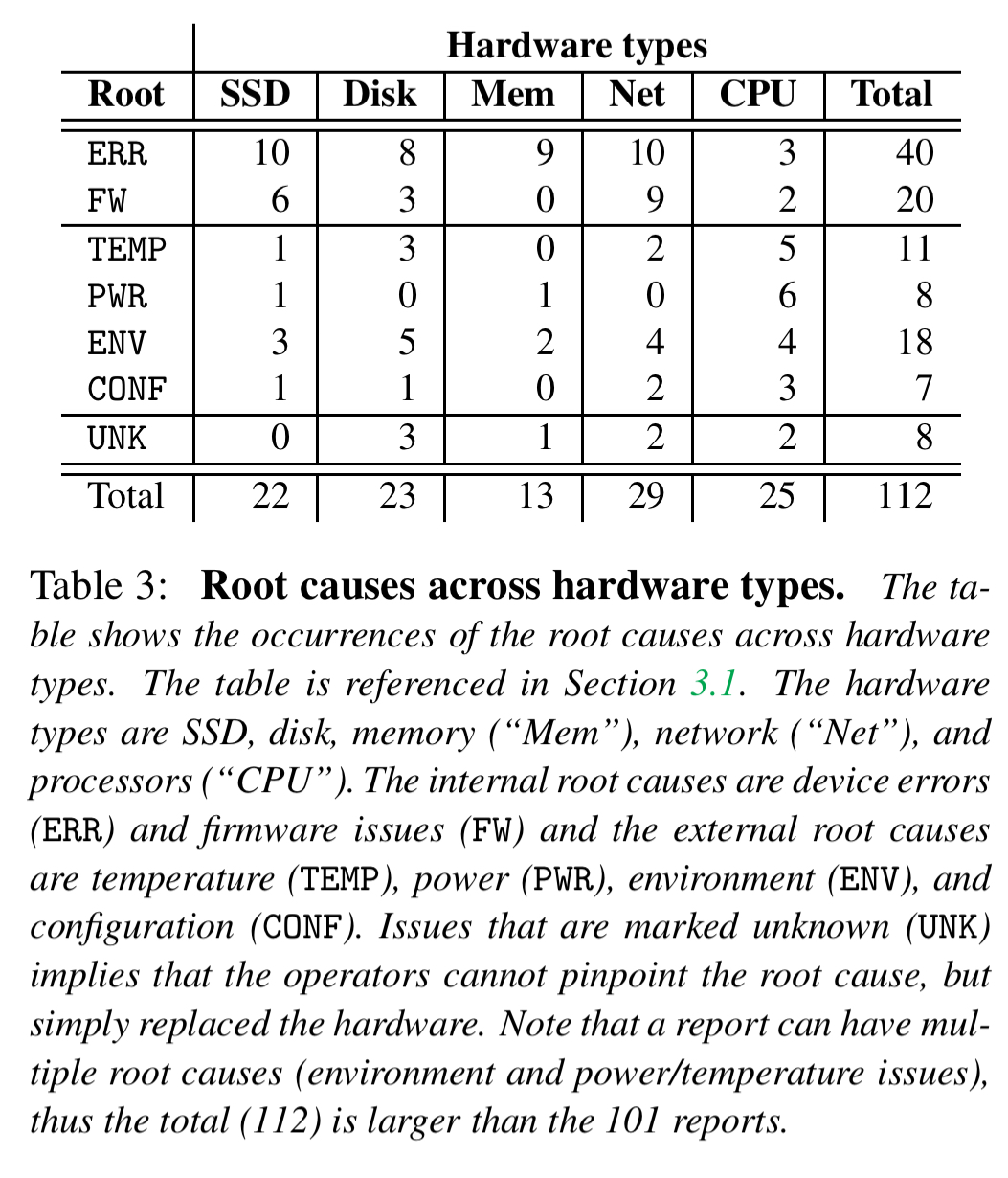 Section 4 in the paper describes the myriad ways that SSDs, Disks, Memory, and Network components can suffer from internal failures. And even when a component would otherwise function just fine, section 5 catalogues a long list of external factors that have been known to cause partial failures:

Fail-stops in some components can cause others to exhibit fail-slow behaviour:

For example, a dead power supply throttled the CPUs by 50% as the backup supply did not deliver enough power; a single bad disk exhausted the entire RAID card’s performance; and a vendor’s buggy firmware made a batch of SSDs stop for seconds, disabling the flash cache layer and making the entire storage stack slow.

Likewise frequent transient failures can result in fail-slow behaviour due to the overheads of error masking (retries, repairs, etc..). When errors ceases to be rare, the masking overhead becomes the normal case performance.

Partial internal failures whereby only some part of the device is unusable can also lead to fail-slow behaviour. 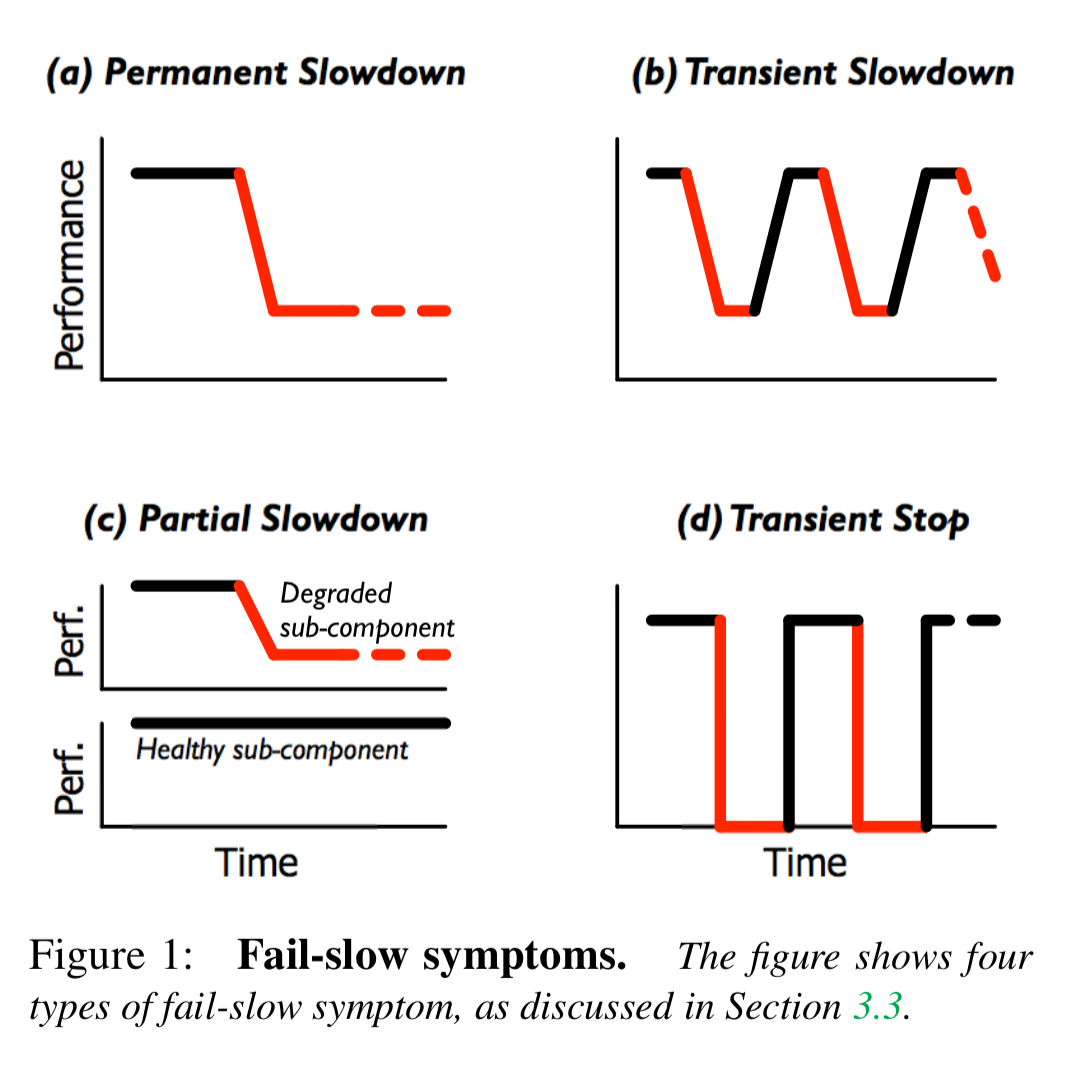 The slowdown may be permanent, or the device may fluctuate between normal and degraded performance. Some parts of the device may continue to offer full performance while others are degraded, and in other situations a device may periodically reboot itself, leading to periods of complete unavailability.

We’ve already seen the example of the failing fan leading to a cascade of events ending in degraded disk performance. Another example is a faulty sensor in a motherboard reporting a false value to the OS, thus making the CPUs run slower in energy saving mode. Fail-slow hardware problems can cascade into the software stack – for example, in an HBase deployment a memory card at 25% of normal speed caused backlogs, out-of-memory errors, and crashes.

The paper is packed with anecdotes that I didn’t have space to cover here. It’s well worth a read to get a finer appreciation of the kinds of hazards that await when building and operating systems at scale.

We believe fail-slow hardware is a fundamentally harder problem to solve [than fail-stop]. It is very hard to distinguish such cases from ones that are caused by software performance issues. It is also evident that many modern, advanced deployed systems do not anticipate this failure mode. We hope that our study can influence vendors, operators, and system-designers to treat fail-slow hardware as a separate class of failures and start addressing them more robustly in future system.