If you’re going to fail, fail properly dammit! All this limping along in degraded mode, doing your best to mask problems, turns out to be one of the key causes of major availability breakdowns and performance anomalies in cloud-scale systems. Today’s HotOS’17 paper is a short piece discussing Microsoft Azure experiences with such gray failures.

Just like all the other kinds of failures, the larger your scale, the more common gray failures become. Common enough indeed that:

Our first-hand experience with production cloud systems reveals that gray failure is behind most cloud incidents.

A definition of gray failure

First we need to understand the enemy. Anecdotes of gray failure have been known for years, but the term still lacks a precise definition.

We consider modeling and defining gray failure a prerequisite to addressing the problem.

The model proposed by the authors is the result of an extensive study of real incidents in Azure cloud services. It’s all a question of perspective. 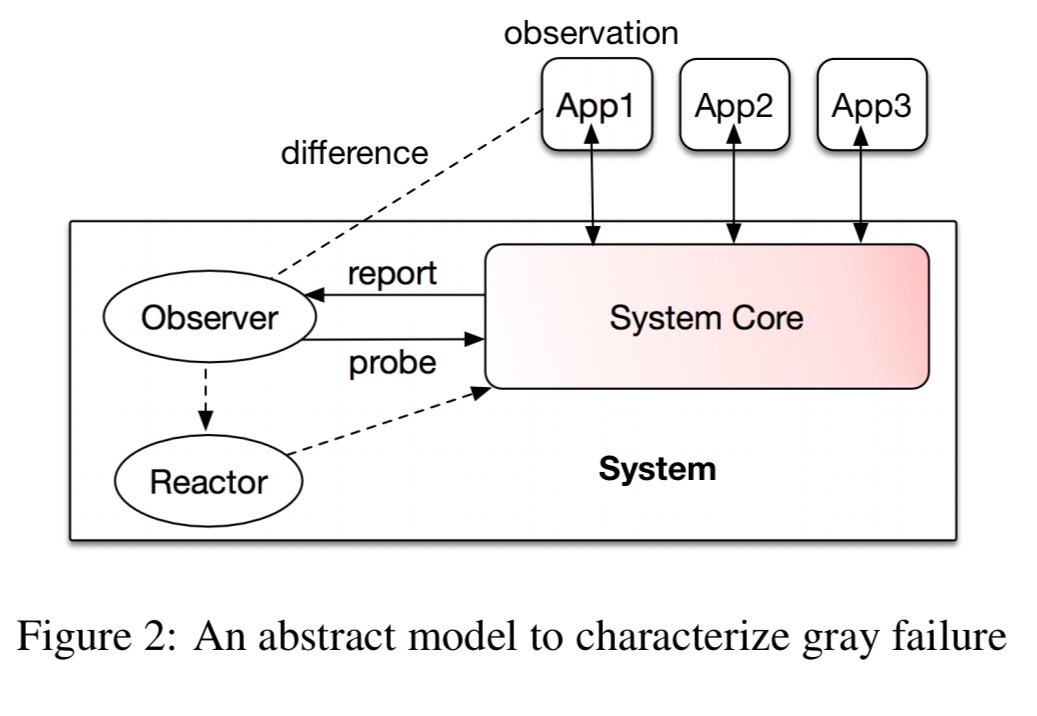 Consider some system being monitored by a failure detector (observer in the figure above). If the observer detects a fault, a reactor takes action (for example, restarting components). Meanwhile, there are all kinds of clients (apps in the figure above) using the system. By virtue of interacting with it, these apps make their own observations of the health of the system (are responses slow, errors being reported, etc..). Cloud systems may be used simultaneously by many different kinds of apps, each with their own perspective on the health of the system.

Considering the system and its client apps, we can draw the following quadrant of gray: 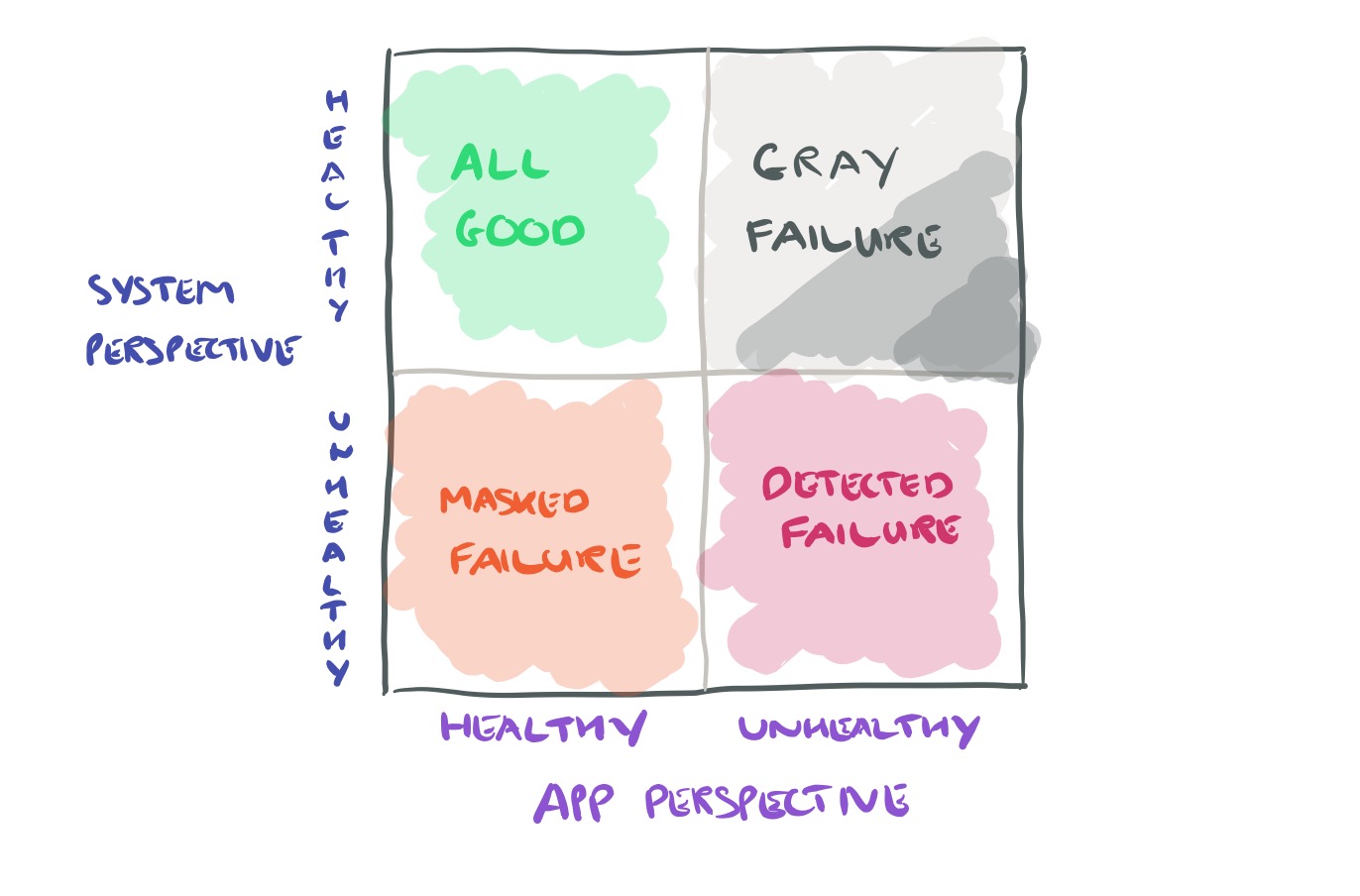 There’s also a cycle of gray that many systems tend to follow:

… initially the system experiences minor faults (latent failure) that it tends to suppress. Gradually, the system transits into a degraded mode (gray failure) that is externally visible but which the observer does not see. Eventually the degradation may reach a point that takes the system down (complete failure), at which point the observer also realizes the problem. A typical example is a memory leak.

During a gray failure with intermittent misbehaviour, we can go round the cycle many times. 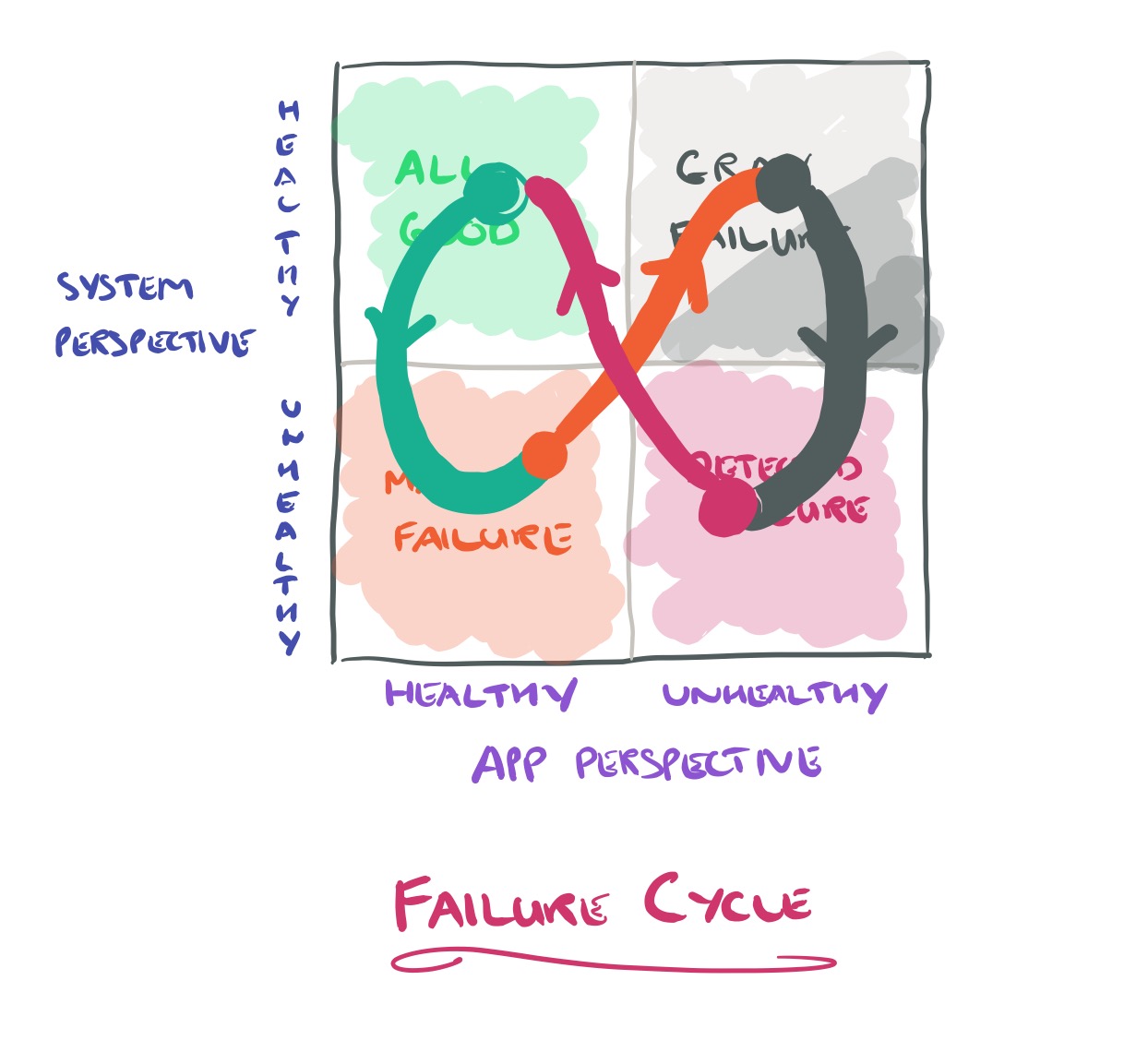 Let’s look at some gray failure examples from the Azure world to make this all a bit more concrete.

Data center networks can route around failing switches, but typically do not re-route packets when switches experience intermittent failures such as random and silent packet drops. The gray failure results in application glitches or increased latency.

As a consequence, we sometimes see cases were increasing redundancy actually lowers availability.

Just as with tail latency, the chances of experiencing this go up exponentially with the fan-out factor (number of services involved) in processing a given request. If we have n core switches (or indeed, any n resources used to process requests) then the probability that a certain switch is traversed by a request is given by

where m is the fan-out factor.

This probability rapidly approaches 100% as m becomes large, meaning each such request has a high probability of involving every core switch. Thus a gray failure at any core switch will delay nearly every front-end request.

The more switches you have (for example, for increased redundancy), the more likely at least one of them will experience a gray failure!

The authors describe incidents where unhealthy VMs are internally experiencing severe network issues, but the failure detector is receiving heartbeats via a host agent that communicates with the VM using local RPC. Thus the problem is never spotted and no recover happens until a user reports an issue. This leads to long gaps between the point of user impact and the point of resolution.

When the cure is worse than the disease

The failure detector did pick up on the continual rebooting, concluded the data server was irreparable and took it out of service. This put pressure on the remaining healthy servers, causing more servers to degrade and experience the same ultimate fate.

Naturally, this eventually led to a catastrophic cascading failure.

(Aside, it sounds like they need a back-pressure mechanism!).

VMs run in compute clusters, and their virtual disks lie in storage clusters accessed over the network. Sometimes a storage or network issue means a VM can’t access its virtual disk, which can lead to a crash.

If no failure detector detects the underlying problem with the storage or network, the compute-cluster failure detector may incorrectly attribute the failure to the compute stack in the VM. For this reason, such gray failure is challenging to diagnose and
respond to. Indeed, we have encountered cases where teams responsible for different subsystems blame each other for the incidents since no one has clear evidence of the true cause.

First note that the standard distributed systems mechanisms for availability don’t work well with gray failures because such failures are not part of their failure model:

A myriad of techniques have been proposed to leverage redundancy and replication to tolerate component faults, e.g., primary/backup replication, RAID, Paxos, and chain replication. Many of these techniques assume a simple failure model: fail-stop. Different from fail-stop, a component experiencing gray failure appears to be still working but is in fact experiencing severe issues. Such discrepancy can negatively impact traditional techniques and cause fault-tolerance anomalies.

The next thought that went through my mind was “Isn’t this just inadequate monitoring?” If you want to understand how well your website is performing for example, send it external requests similar to the ones that users will submit. Under that hypothesis the differential observability problem is caused by insufficient/inappropriate observations that don’t capture what truly matters to the client.

Although it would be ideal to eliminate differential observability completely by letting the system measure what its apps observe, it is practically infeasible. In a multi-tenant cloud system that supports various applications and different workloads, it is unreasonable for a system to track how it is used by all applications.

There’s a deeper problem lurking here too, which goes back to the binary fail-stop model. Failure detectors typically send an “it failed” message which then initiates recovery, but gray failure is not such a black-and-white issue.

A natural solution to gray failure is to close the observation gaps between the system and the apps it services. In particular, system observers have traditionally focused on gathering information reliably about whether components are up or down. But, gray failure makes these not just simple black-or-white judgements. Therefore, we advocate moving from singular failure detection (e.g., with heartbeats) to multi-dimensional health monitoring.

Another way to increase the chances of closing the observation gap is to combine observations from many different vantage points.

… since gray failure is often due to isolated observations of an observer, leveraging the observations from a large number of different components that are complementary to each other can help uncover gray failure rapidly. Indeed, many gray failure cases we investigated are only detectable in a distributed fashion because each individual component has only a partial view of the entire system (so the gray failures are intrinsic).

Exactly how to do this is an open question. If the observations are taken close to the core of the system for example, they may not see what the clients see. But if taken near the apps, built-in fault tolerance mechanisms may mask faults and delay detection of gray failures.

We envision an independent plane that is outside the boundaries of the core system but nevertheless connected to the observer or reactor.

This sounds very like a classic centralised control style solution to me (I could well be wrong, we only have this one sentence to go on!). I wonder what a solution starting from the premises of promise theory might look like instead?

A final technique that may help with gray failure comes through understanding how the gray failure cycle evolves over time. If these timeseries patterns can be learned, then we can predict more serious failures and react earlier. Since many faults truly are benign though, care must be taken not to do more harm than good.

As cloud systems continue to scale, the overlooked gray failure problem becomes an acute pain in achieving high availability. Understanding this problem domain is thus of paramount importance… We argue that to address the problem, it is crucial to reduce differential observability, a key trait of gray failure.