Since we’ve spent the last couple of days sketching anomaly diagrams and looking at isolation levels, I wanted to finish the week off with a quick recap of session anomalies and consistency levels for distributed stores. In terms of papers, I’ve drawn primary material for this from:

In the database systems community, the gold standard is serializability. We’ve spent plenty of time looking at this in the last couple of days. Serializability concerns transactions that group multiple operations across potentially multiple objects. A serializable schedule is one that corresponds to some ordering of the transactions such that they happen one after the other in time (no concurrent / overlapping transactions). It’s the highest form of isolation between transactions.

In the distributed systems community, the gold standard is linearizability. Linearizability concerns single operations on single objects. A linearizable schedule is one where each operation appears to happen atomically at a single point in time. Once a write completes, all later reads (wall-clock time) should see the value of that write or the value of a later write. In a distributed context, we may have multiple replicas of an object’s state, and in a linearizable schedule it is as if they were all updated at once at a single point in time.

Linearizability doesn’t just apply in a distributed context, although that’s what I’m focusing on here. We can also talk about linearizability of operations in a multi-processor system for example.

When we have distributed datastores, all the terminology can get a bit confusing because the two communities use the same words in different ways – especially the term ‘consistency’.

The kind of consistency we’ve been talking about in the last couple of days is the consistency of database state that arises when all of the data integrity constraints are met. It is the C in ACID. Transactions move the database from one consistent state to another, and because they are atomic and (when serializable) fully isolated, you never observe inconsistent intermediate states.

The kind of consistency we talk about when we talk about ‘eventual consistency’ or ‘causal consistency’ is different – here we are concerned with whether or not the state is consistent across multiple distributed replicas (i.e. the same in each of those replicas). It is the C in the CAP theorem. For this reason linearizability is also sometimes called atomic consistency – it gives the illusion that consistency is instant and all-or-nothing on writes. This distributed systems version of the term consistency is related to consenus. You’ll also come across the term convergence which is the process by which different replicas become consistent (converge on the same state) over time.

A non-monotonic read anomaly occurs within a session when a read of some object returns a given version, and a subsequent read of the same object returns an earlier version. The Monotonic Reads guarantee prevents these anomalies and ensures that reads from each item progress according to a total order.

A non-monotonic write anomaly occurs if a session’s writes become visible out of order. The Monotonic Writes guarantee prevents these anomalies and ensures that all writes within a session are made visible in order.

A non-monotonic transaction anomaly occurs if a session observes the effect of transaction T1 and then commits T2, and another session sees the effects of T2 but not T1. The Writes Follow Reads guarantee prevents these anomalies.

The Read Your Writes guarantee ensures that whenever a client reads a value after updating it, it sees that value (or one installed after it). As far as I know, the anomaly that arises when you do not read your writes does not have a name. Perhaps we could call the failure to read your writes an arrest anomaly ;).

If we combine the Monotonic Reads, Monotonic Writes, and Read Your Writes guarantees we get PRAM (Pipelined Random Access Memory) consistency. If we add Writes Follow Reads to PRAM, we get Causal Consistency. 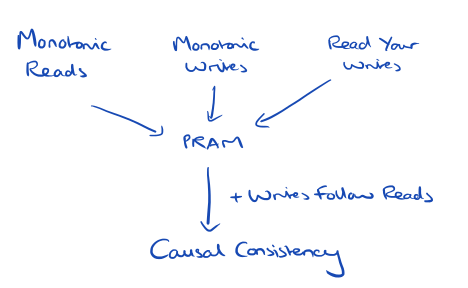