udpate: 2 minor corrections in the section on A5A per the comment from ‘banks’ – thanks!

The ANSI SQL isolation levels were originally defined in prose, in terms of three specific anomalies that they were designed to prevent. Unsurprisingly, it turns out that those original definitions are somewhat ambiguous and open to both a strict and a broad interpretation. It also turns out that they are not sufficient, since there is one even more basic anomaly not mentioned in the standard that needs to be prevented in order to be able to implement rollback and recovery. Looking even more deeply, the paper uncovers eight different phenomena (anomalies) that can occur, and six different isolation levels. I’m going to focus in this write-up on explaining those phenomena and isolation levels, and for those interested in the detailed comparison to the original ANSI SQL isolation levels I refer you to the full paper.

(I hope you find all the history sketches in this post useful – it took me an age to draw and scan them all! You might find it easier to view slightly bigger versions of the images – simply click on the image to see an enlarged view.)

Here’s an overview map that shows how they all relate, that may be helpful as we work our way through. 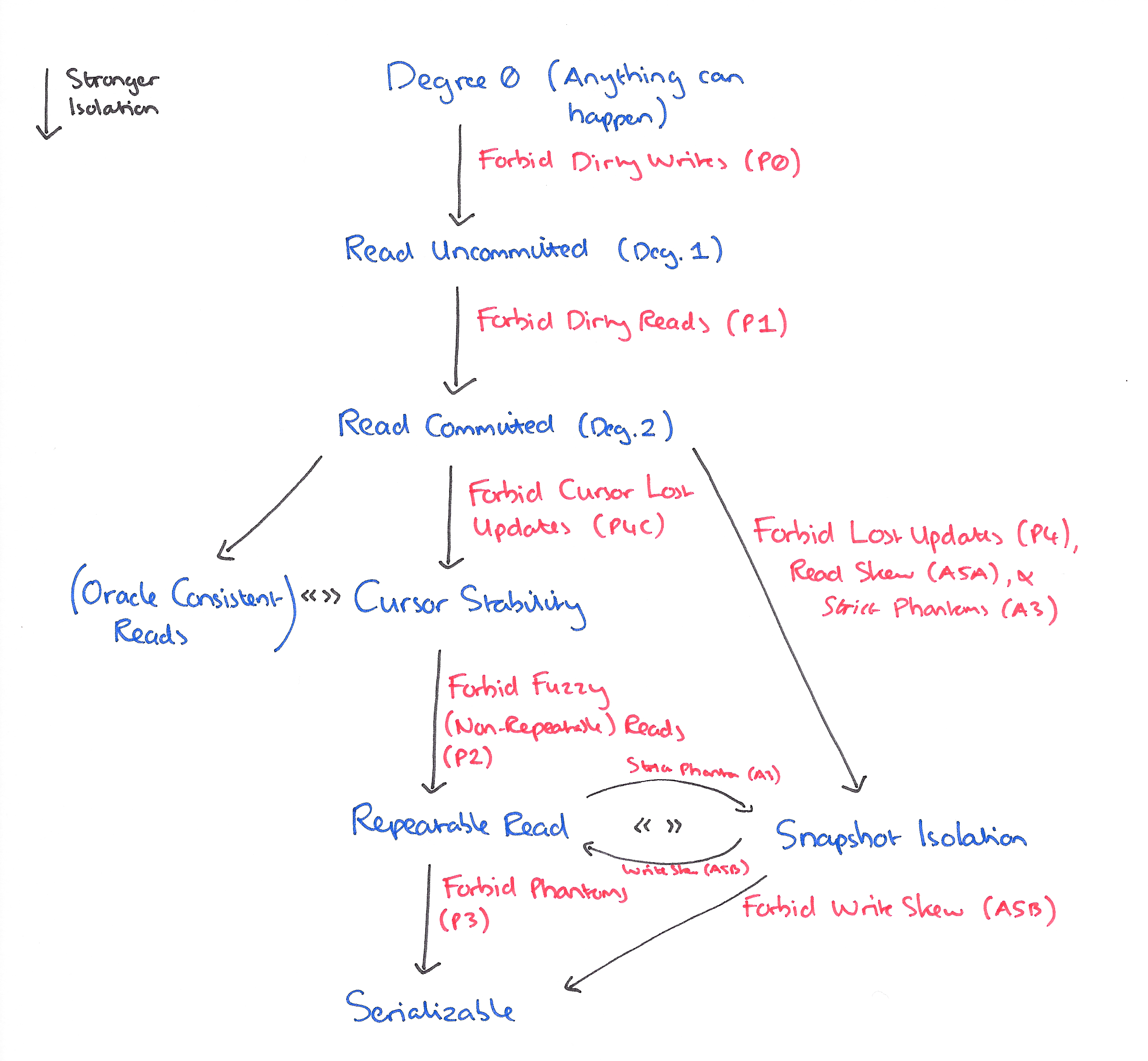 In the description that follows, long duration lock are those held until the end of the transaction once taken, and short duration locks are released once the action involved completes. Furthermore,

A Dirty Write occurs when one transaction overwrites a value that has previously been written by another still in-flight transaction.

One reason why Dirty Writes are bad is that they can violate database consistency. Assume there is a constraint between x and y (e.g., x = y), and T1 and T2 each maintain the consistency of the constraint if run alone. However, the constraint can easily be violated if the two transactions write x and y in different orders, which can only happen if there are Dirty writes.

Another pressing reason to protect against dirty writes is that without protection from them the system can’t automatically rollback to a before image on transaction abort.

Other than at the serializable level, ANSI SQL isolation levels do not exclude dirty writes. However, “ANSI SQL should be modified to require P0 (protection) for all isolation levels.”

In a locking-based implementation, well-formed reads and writes combined with holding short-duration read-locks and long-duration write-locks will prevent dirty reads.

A Fuzzy or Non-Repeatable Read occurs when a value that has been read by a still in-flight transaction is overwritten by another transaction. Even without a second read of the value actually occurring this can still cause database invariants to be violated. Consider another history from our transfer example:

In a locking implementation, well-formed reads and writes combined with long duration read and write locks for data items, but only short-duration locks for predicate-based reads will prevent non-repeatable reads.

A Phantom occurs when a transaction does a predicate-based read (e.g. SELECT… WHERE P) and another transaction writes a data item matched by that predicate while the first transaction is still in flight. In the original ANSI SQL language only matching inserts were forbidden (the new entries being the phantoms), but in fact to be safe we need to prohibit any write: updates, deletes, and inserts. Consider the history below:

In a locking-based implementation, well-formed reads and writes coupled with long-duration read locks (both data item and predicate), and long-duration write locks will prevent phantoms.

In a locking implementation, over above the requirements to prevent P0 and P1, holding a lock on the current item of the cursor until the cursor moves or is closed will prevent Cursor Lost Updates.

Read skew can occur when there are integrity constraints between two or more data items. Consider the constraint x + y = 100, and the history: 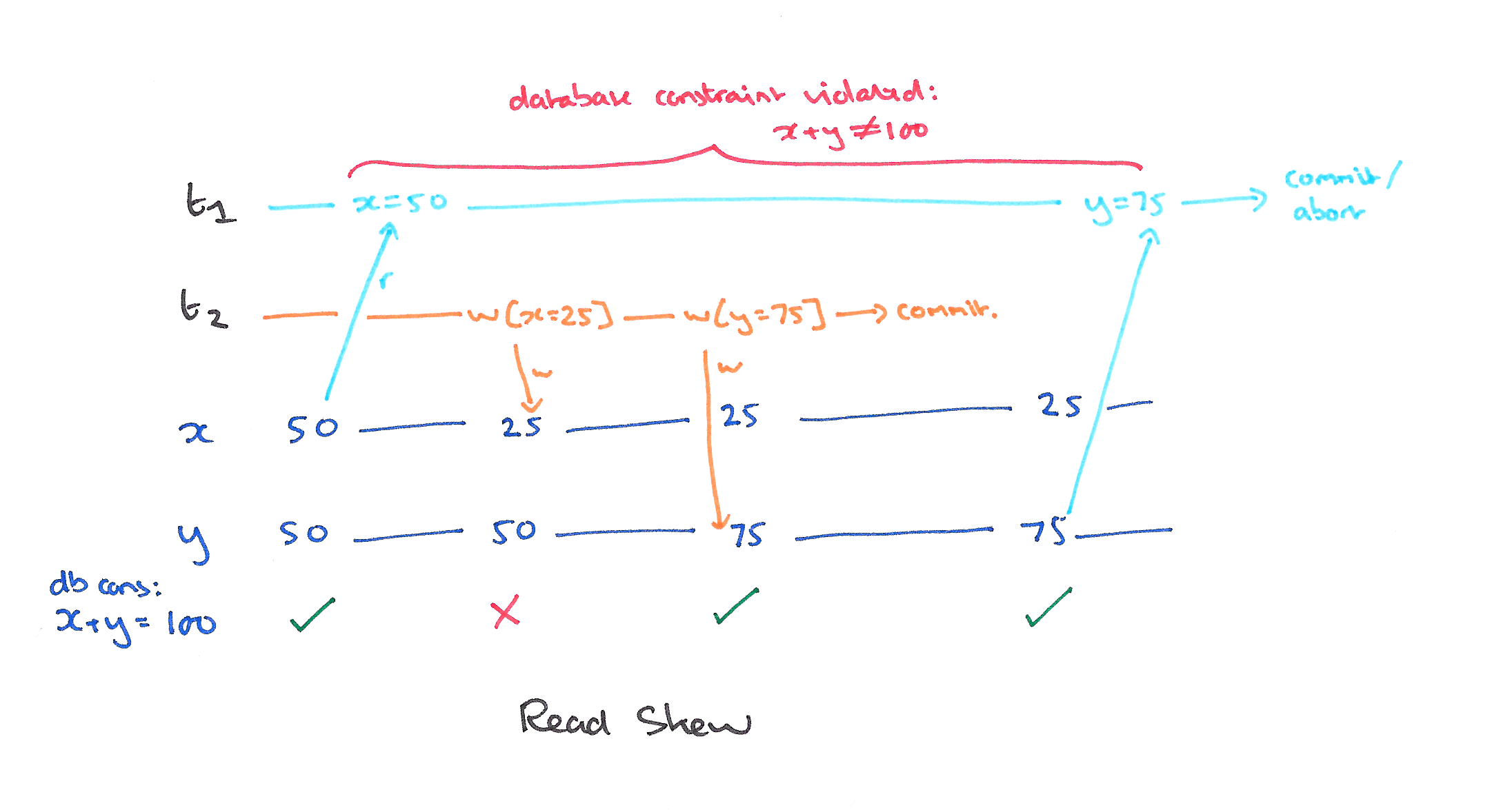 Write skew is very similar. Suppose our constraint is x+y ≤ 100. And this time we interpose a transaction before T1 issues a write: 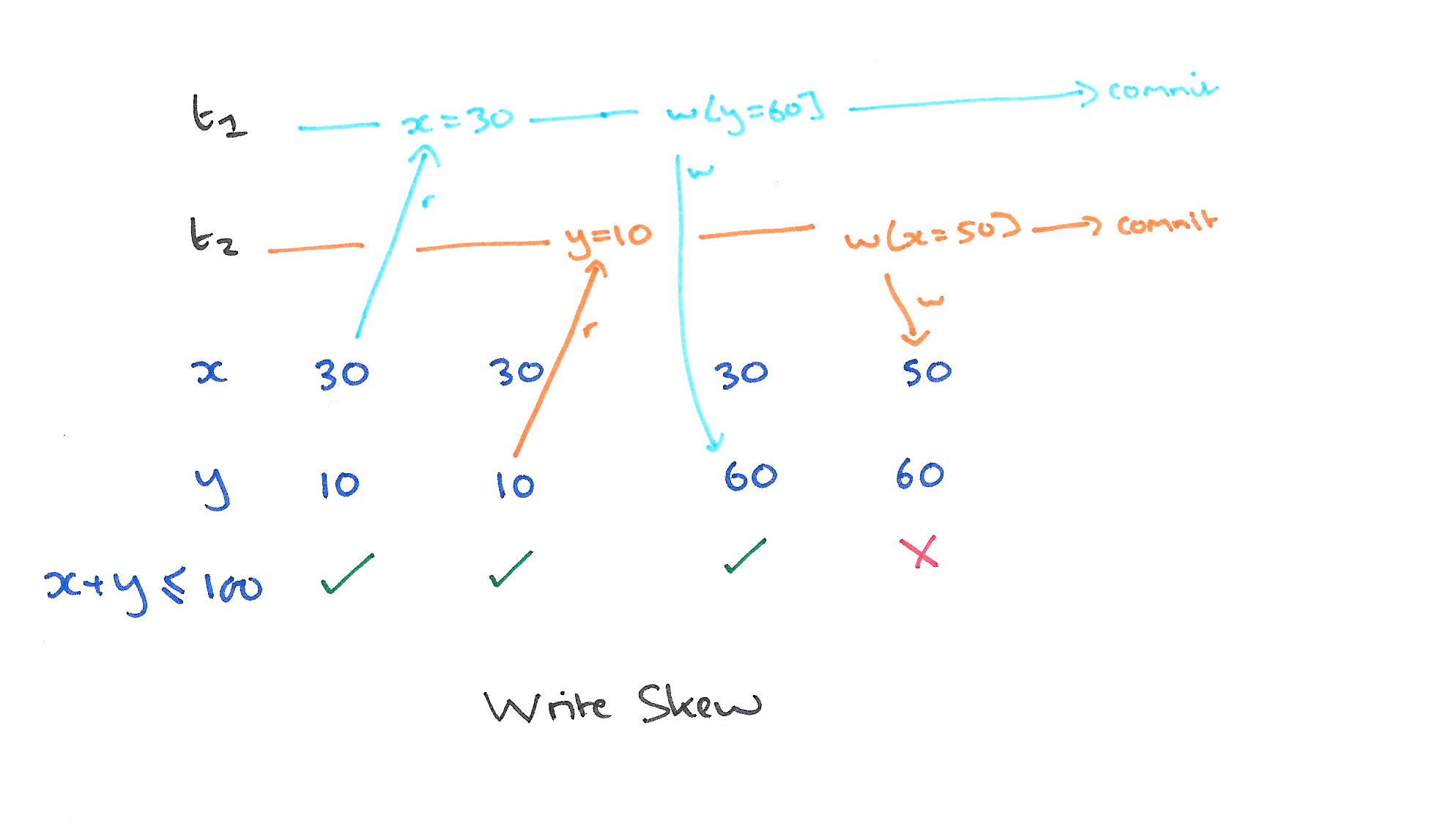 We can characterise isolation levels by the phenomena they allow (prevent):

We can compare isolation levels based on the non-serializable histories that they allow:

We can partially order isolation levels according to << :

There are two other isolation levels discussed in the paper, Oracle Consistent Read, and Snapshot Isolation. Like Cursor Stability, Read Committed << Oracle Consistent Read. Oracle Read Consistency isolation gives each SQL statement the most recent committed database value at the time the statement began.It is as if the start-timestamp of the transaction is advanced at each SQL statement. The members of a cursor set are as of the time of the Open Cursor. The underlying mechanism recomputes the appropriate version of the row as of the statement timestamp. Row inserts, updates, and deletes are covered by Write locks to give a first-writer-wins rather than a first committer-wins policy.

In contrast, in snapshot isolation,

Both snapshot isolation and Oracle Consistent Read are types of multi-version concurrency control mechanisms, in which we have to reason about multiple different values of the same data item at any given point in time. It turns out that all Snapshot Isolation histories can be mapped to single-valued histories while preserving data dependencies.