I’ve always enjoyed following work on artistic style transfer. The visual nature makes it easy to gain an appreciation for what is going on and the results are very impressive. It also something that’s been unfolding within the timespan of The Morning Paper, if we peg the beginning to the work of Gatys et al. in 2015. See for example the posts on ‘Texture Networks’ and ‘Deep photo style transfer.’

Beyond direct style transfer, the objective of the work described in today’s paper choice is to uncover representations of styles (archetypes) themselves. Given a large collection of paintings,…

… Our objective is to automatically discover, summarize, and manipulate artistic styles present in the collection.

To visualise what an archetype ‘looks like’ the authors synthesise a texture from an image filled with random noise, using the style representation of the archetype. The following image shows some examples, with the synthesised archetypal textures in the left-most column and the three images next to them on each row showing the individual images that made the strongest contribution to the archetype. 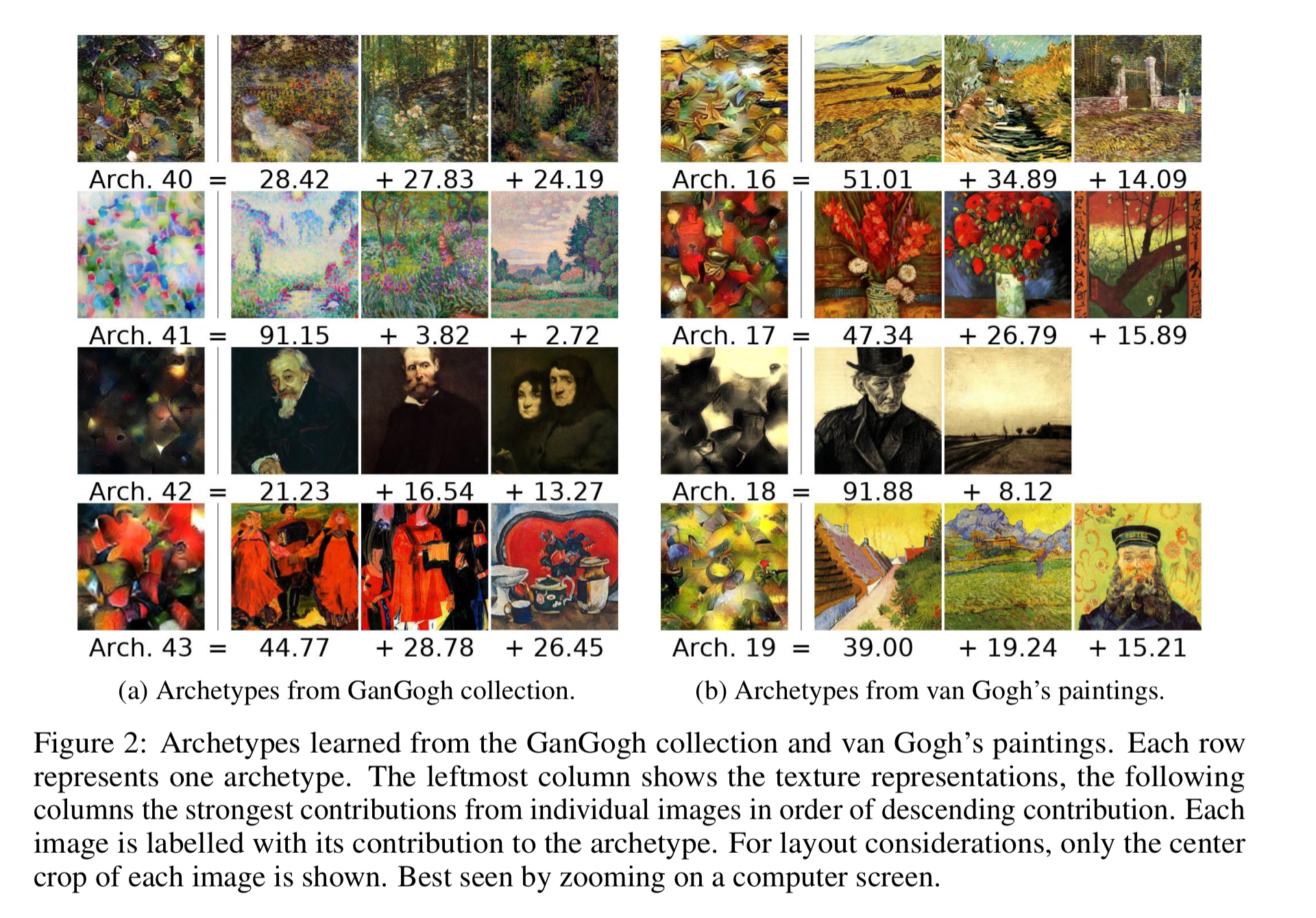 The strongest contributions usually exhibit a common characteristic like stroke style or choice of colors. Smaller contributions are often more difficult to interpret. Figure 2a also highlights correlation between content and style: the archetype on the third row is only composed of portraits.

From a collection of paintings to archetypes

Given a pre-trained VGG-19 network, a concise representation of the style of an individual painting can be obtained in the following manner:

After creating style descriptors in this way for all the paintings in a collection, singular value decomposition is applied to reduce the dimensions to 4096 while keeping more than 99% of the variance.

Given the resulting set of vectors, archetypal analysis is then used to learn a set of archetypes

such that each sample can be well approximated by a convex combination of archetypes. In addition, each archetype is a combination of samples. This is an optimisation problem that can be given to a dedicated solver.

… we use archetypal analysis on the 4096-dimensional style vectors previously described, and typically learn between k=32 to k=256 archetypes. Each painting’s style can then be represented by a sparse low-dimensional code [combination of styles], and each archetype itself associated to a few input paintings.

The following figure shows examples of image styles broken down into their contributing archetypes. 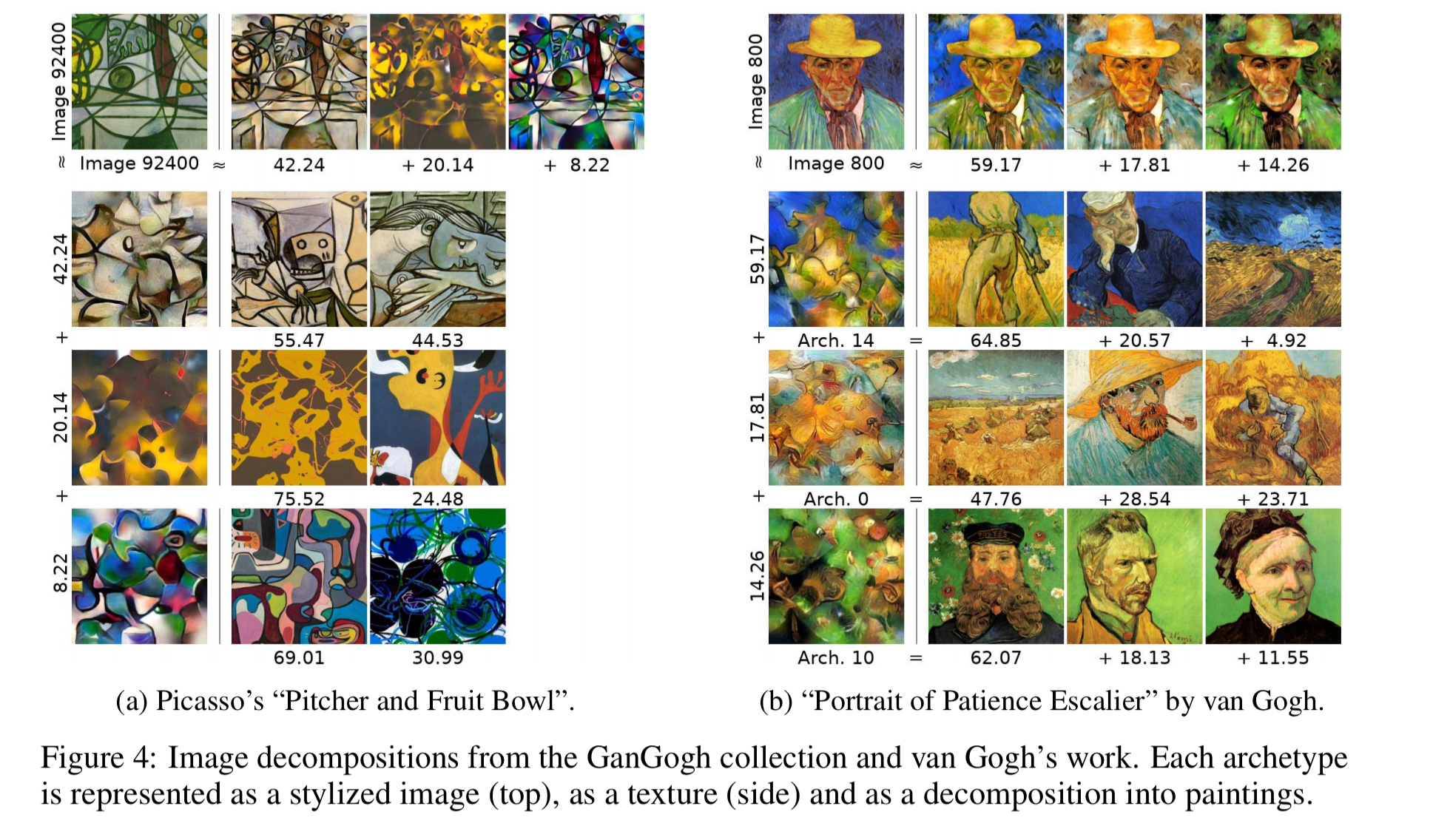 Given a method of decoding a style vector to an image, we can manipulate style vectors in the archetype plane and then transform the results into images. Given a “content” (input) feature map from an original image, whitening and colouring operations can be used to match the mean and covariance structure of a given style feature map. This technique was first described in ‘Universal style transfer via feature transforms.’

Several methods for identifying a target style are of interest:

For example, the following figure shows the results of amplifying archetypal styles within a source image. The middle panel on each row is the original image. Moving left, the strongest component is emphasised, and moving right the second strongest component. 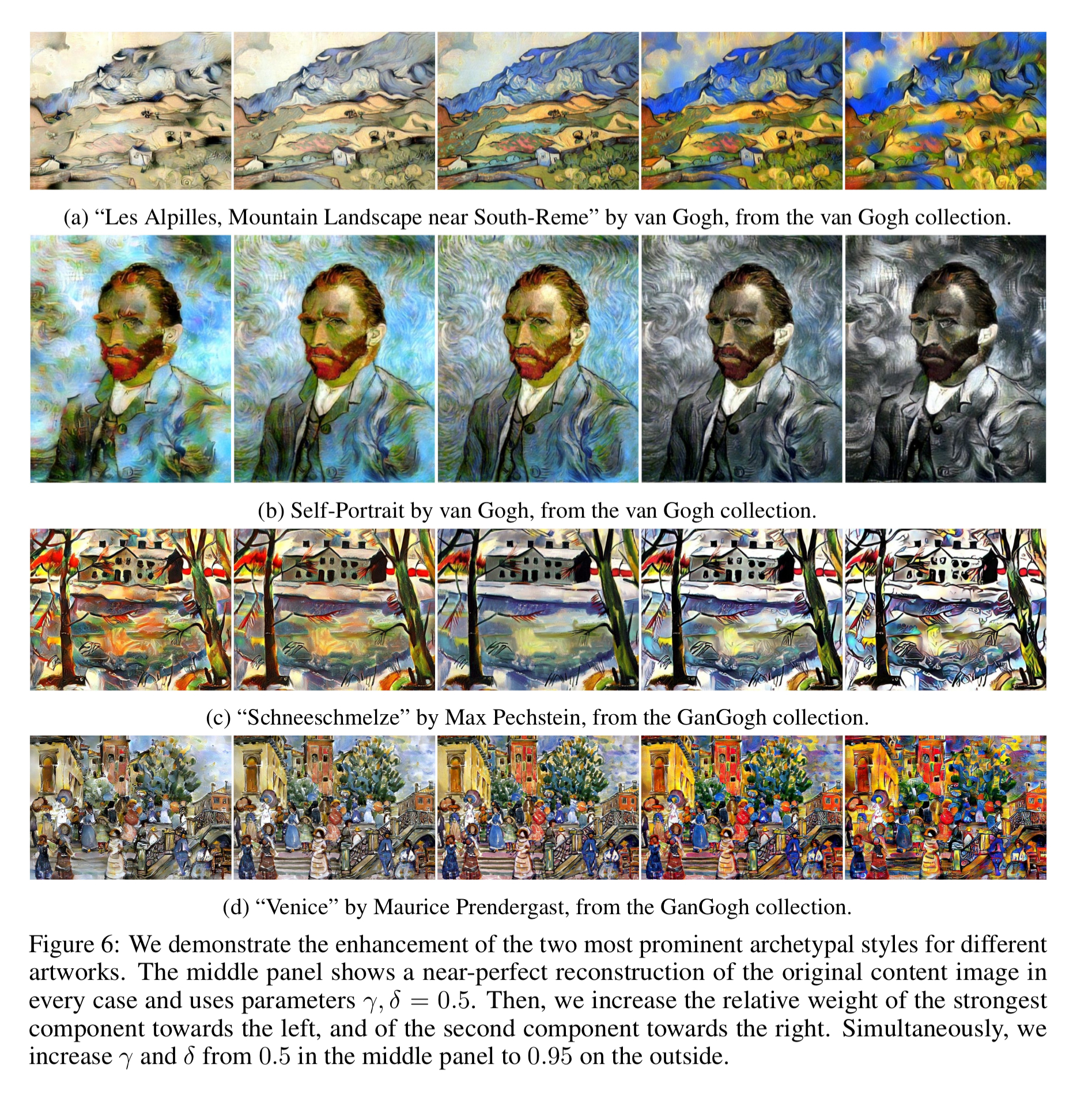 Ignoring any archetypal styles already present, the following figure shows the results of free exploration of the archetypal space for a given source image: 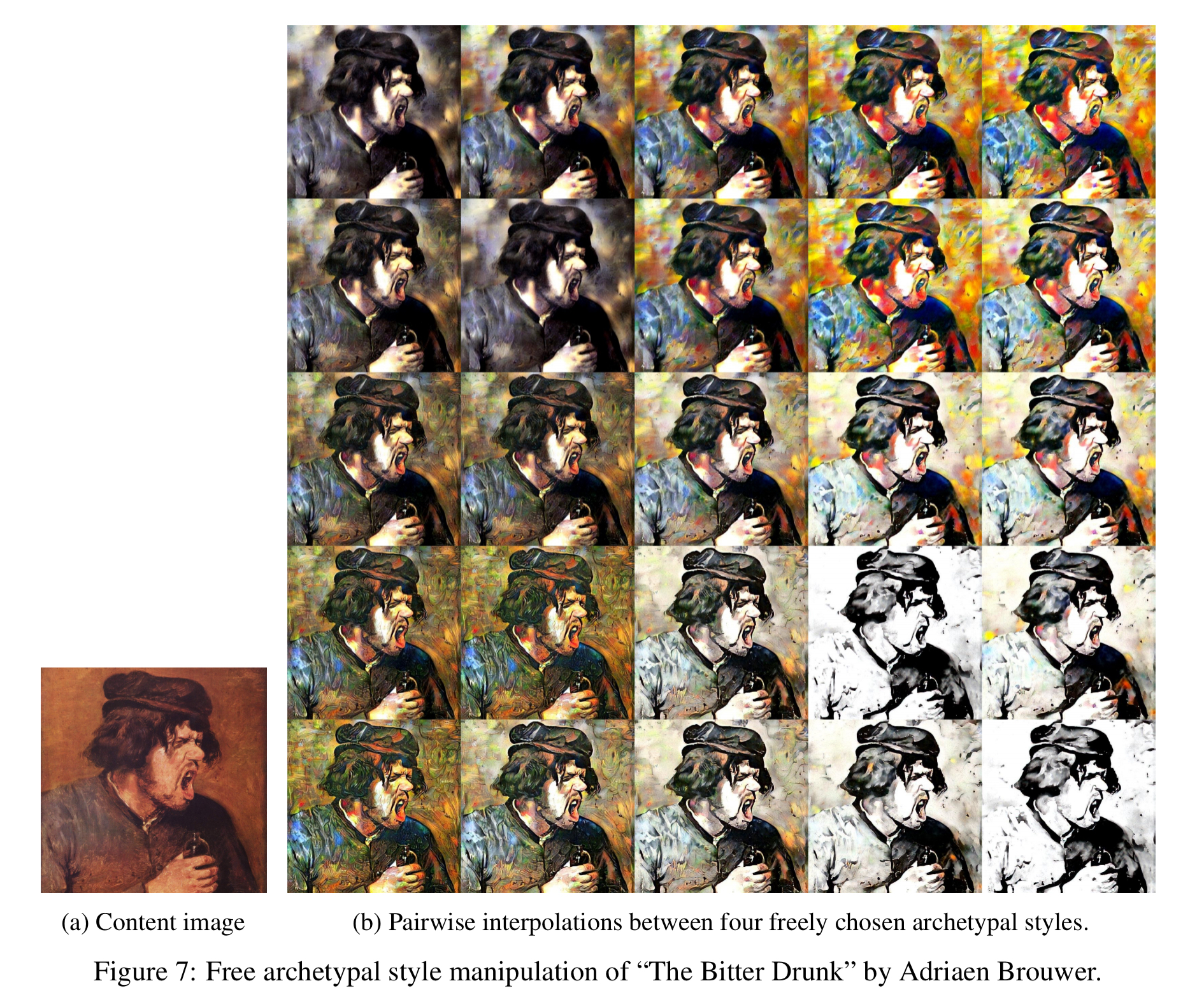 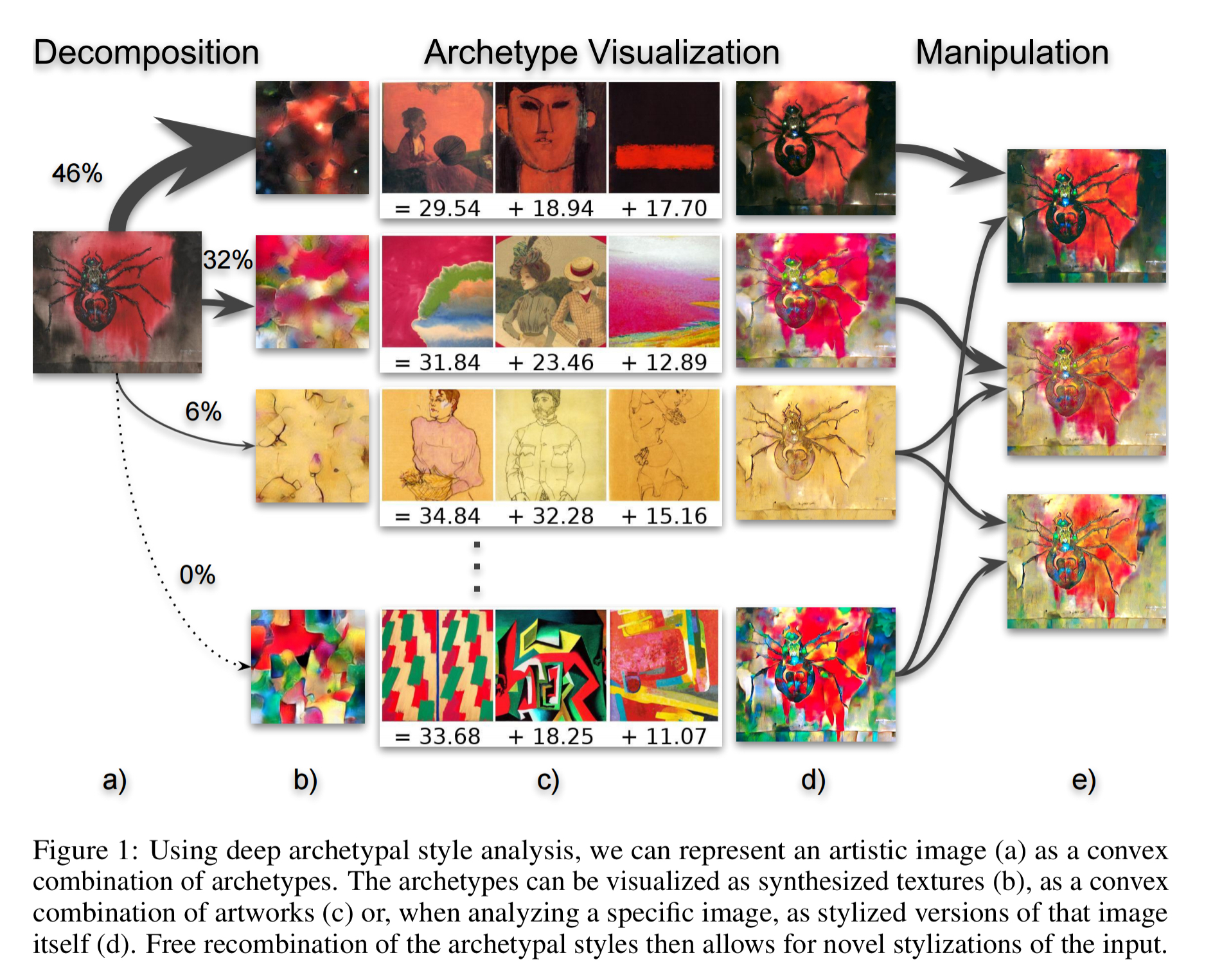