We’ve all been fairly well trained to have good awareness of cross-site scripting (XSS) attacks. Less obvious, and also less well known, is that a similar attack is possible using style sheet injection. A good name for these attacks might be SSS: same-site style attacks.

Even though style injection may appear less serious a threat than script injection, it has been shown that it enables a range of attacks, including secret exfiltration… Our work shows that around 9% of the sites in the Alexa top 10,000 contain at least one vulnerable page, out of which more than one third can be exploited.

I’m going to break today’s write-up down into four parts:

Style sheet injection belongs to a family of attacks known as ‘scriptless’ attacks. While CSS is intended for controlling styling and layout, it does also contain some context-sensitive features that can be used to extract and exfiltrate data. Suppose a page contains some sensitive data you’d like to get your hands on. The first thing you need to do is make that visible if it was otherwise hidden (CSS attribute accessors and content properties will help with this). Once the content is visible, you can apply style directives to it, such as fonts…

Custom attacker-supplied fonts can change the size of the secret text depending on its value. Animation features can be used to cycle through a number of fonts in order to test different combinations. Media queries or the appearance of scrollbars can be used to implement conditional style, and data exfiltration by loading a different URL for each condition from the attacker’s server. Taken together, Heiderich et al. demonstrate that these techniques allow an attacker to steal credit card numbers or CSRF tokens without script execution.

There are other attacks too, this is just one example.

Helping the attacker is the fact that the CSS standard mandates browsers be forgiving when parsing CSS, skipping over parts they don’t understand. Against the attacker though, is the fact that modern browsers won’t load documents with non-CSS content types or syntax errors as stylesheets, if they come from a different domain than the including page.

If both the including page and the included stylesheet come from the same domain though, it’s game on. Relative Path Overwrite vulnerabilities allow an attacker to engineer this scenario.

Now consider what happens if an attacker tries to load the page http;//example.com/rpo/test.php/ (note the trailing slash). For many web sites, this will still return the test.php page. However, now the relative path for the stylesheet resolves to something altogether different, as the trailing slash indicates to the browser a ‘directory’ rather than a ‘file’ (the browser has no way of knowing the true route configuration on the back end of course). So the browser tries to load the stylesheet from http://example.com/rpo/test.php/dist/styles.css.

Attempting to load a stylesheet from this URL may result in an error, but for a number of servers this will be treated as passing dist/styles.css as an (unused!) parameter to test.php. The parameter will be ignored, and stylesheet loaded by the browser will actually be the page http://example.com/rpo/test.php itself.

There’s just one small step left: the test.php page must itself contain a text injection vulnerability. For example, a user supplied parameter which will be included in the page output. The attacker crafts their attack CSS within this text field.

The first account of RPO is attributed to a blog post by Gareth Heyes, introducing self-referencing a PHP script with server-side URL rewriting.

Nowadays a whole family of RPO based attacks are known. A page is vulnerable to RPO if the following conditions are met:

Vulnerable pages are exploitable if the injected style is interpreted by the browser and used for rendering. Browsers in standards-compliant mode will not attempt to parse documents with a content type other than CSS when referenced as a stylesheet. But browsers also support a quirks mode that will. A browser will go into quirks mode based on the document type specified for the page. Even when a document type would otherwise indicate standards-compliant mode, quirks mode can often be forced in IE by loading the vulnerable page into a frame.

Finding RPO vulnerabilities in the wild

The authors examine pages from the Common Crawl archive to extract candidate pages including at least one stylesheet using a relative path. Then to determine if the pages are vulnerable, they attempt to inject style directives by requesting variations of each page’s URL to cause path confusion and test whether the generated response reflects the injected style directives. Finally, they look to see whether the vulnerable pages can be exploited by checking whether the reflected style directives are parsed and used for rendering. (See §3.5 for a discussion of ethical considerations). 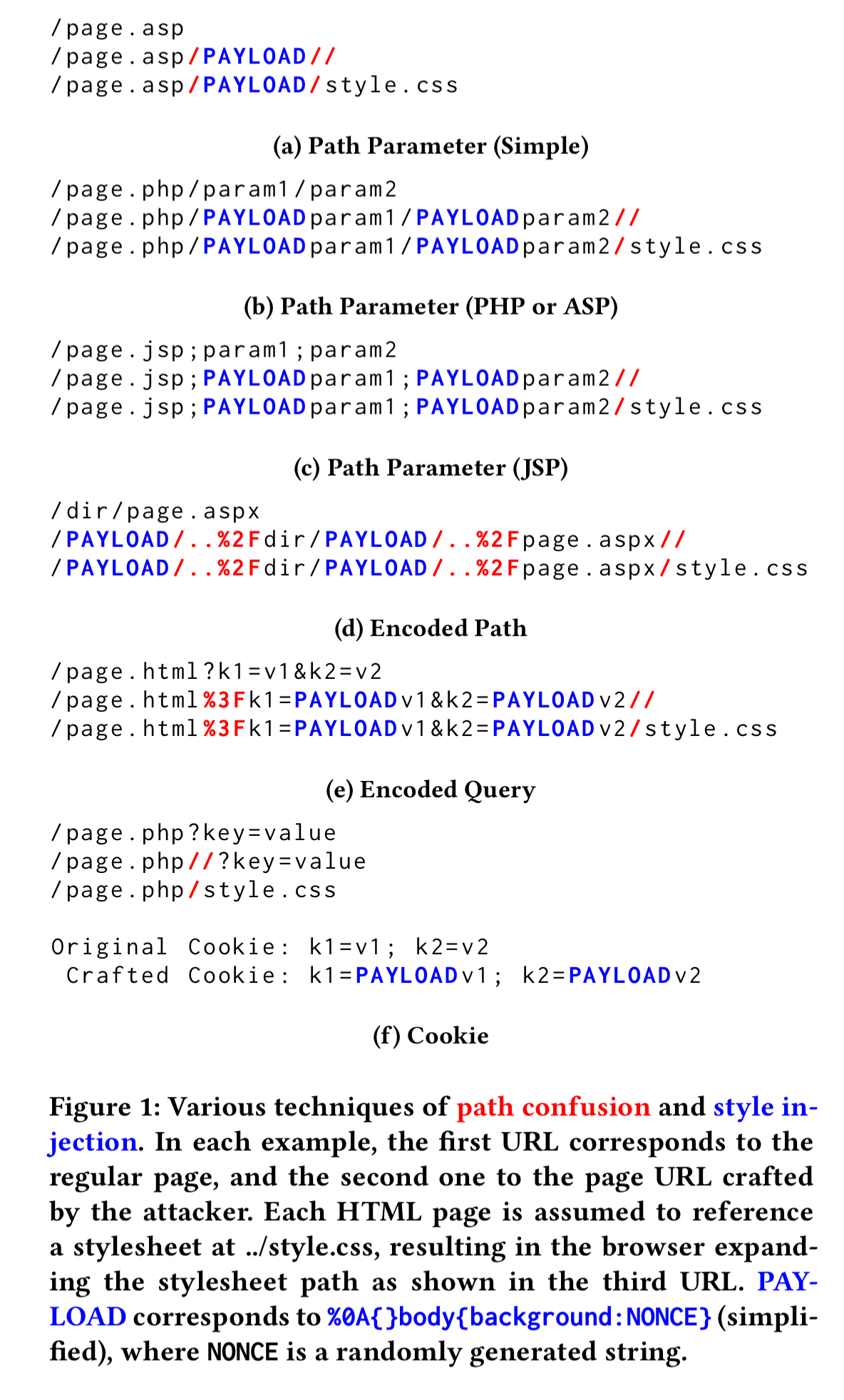 The following chart summarises what the team found, bucketing sites by their Alexa rank. 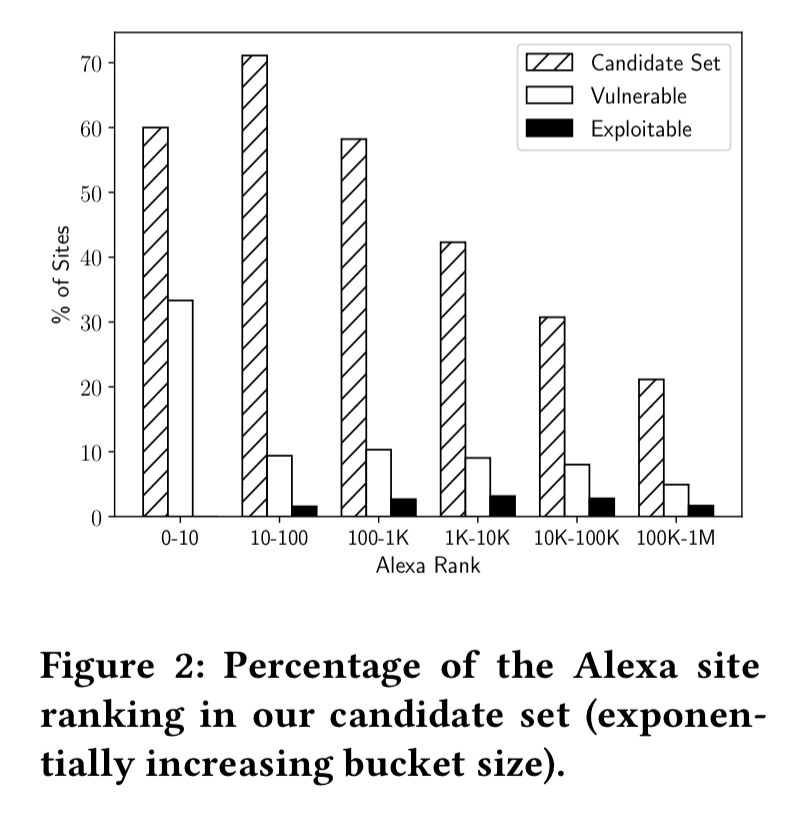 In general, the higher the Alexa rank, the more likely a site is to contain a vulnerable page (perhaps because these sites also tend to have more pages overall?). 2.9% of vulnerable pages turned out to be exploitable. In total, 0.5% of sites overall had at least one exploitable page.

The following show the most frequent document types that caused browsers to render in quirks mode. 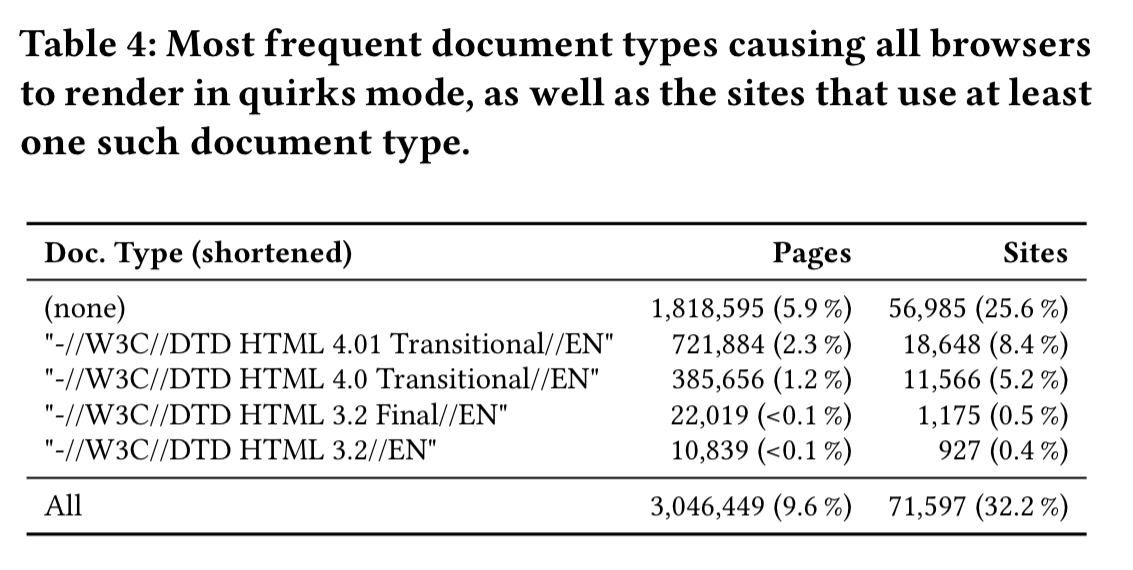 While analyzing the exploitable pages in our dataset, we noticed that many appeared to belong to well-known CMSes. Since these web applications are typically installed on thousands of sites, fixing RPO weaknesses in these applications could have a large impact… After careful analysis, we confirmed four CMSes to be exploitable in their most recent version that are being used by 40,255 pages across 1,197 sites.

The vulnerabilities were responsibly disclosed, and at the time the paper was written, one of the four had responded to say they intended to fix the issue.

One option is to use only absolute URLs, taking away the relative path expansion. Alternatively you can specify a base tag, though Internet Explorer did not appear to implement the tag correctly (i.e., was still vulnerable) at the time of the evaluation. One of the best mitigations is to avoid exploitation by declaring a modern document type that causes rendering in standards compliant mode. This defeats the attack in all browsers apart from IE. For IE it is also necessary to prevent the page being loaded in a frame by using X-Frame-Options , using X-Content-Type-Options to disable ‘content type sniffing,’ and X-UA-Compatible to turn off IE’s compatibility view.

Compared to XSS, it is much more challenging to avoid injection of style directives. Yet, developers have at their disposal a range of simple mitigation techniques that can prevent their sites from being exploited in modern browsers.

Now it’s just up to you to use them!