With thanks to Cris Conde for bringing this paper to my attention.

We’ve looked at quite a few adversarial attacks on deep learning systems in previous editions of The Morning Paper. I find them fascinating for what they reveal about the current limits of our understanding.

…humans are able to correctly classify the adversarial image with relative ease, whereas the CNNs predict the wrong label, usually with very high confidence. The sensitivity of high performance CNNs to adversarial examples casts serious doubt that these networks are actually learning high level abstract concepts. This begs the following question: How can a network that is not learning high level abstract concepts manage to generalize so well?

In this paper, Jo and Bengio conduct a series of careful experiments to try and discover what’s going on. The initial hypothesis runs like this:

When the training and the test set share similar image statistics, it is wholly possible for a machine learning model to learn superficial cues and generalize well, albeit in a very narrow sense as they are highly dependent on the image statistics. Adversarial examples would be destroying the superficial cues. We believe that this is precisely how deep CNNs can attain record breaking generalization performance on all sorts of natural image tasks, and yet can be so sensitive to adversarial perturbations.

To gather evidence in favour of this hypothesis, we need to find a perturbation function over a dataset such that:

Conditions (1) and (2) together guarantee that the original and perturbed datasets share the same high level abstractions but exhibit different superficial cues.

Fourier filtering to the rescue

While natural images are known to exhibit a huge variance in the raw pixel space, it has been shown that the Fourier image statistics of natural images obey a power law decay… An immediate takeaway is that natural images tend to have the bulk of their Fourier spectrum concentrated in the low to medium range frequencies. Due to this power law concentration of energy in the frequency space, it is possible to perform certain types of Fourier filtering and preserve much of the perceptual content of an image.

The authors experiment with two different kinds of Fourier filters: a low-frequency filter that uses a radial mask in the Fourier domain to set higher frequency modes to zero, and a random filter that uses a uniformly random mask to set a Fourier mode to zero with probability p.

Here are some example images from the SVHN dataset (top row), and the results of applying the radial and random masking filters respectively: 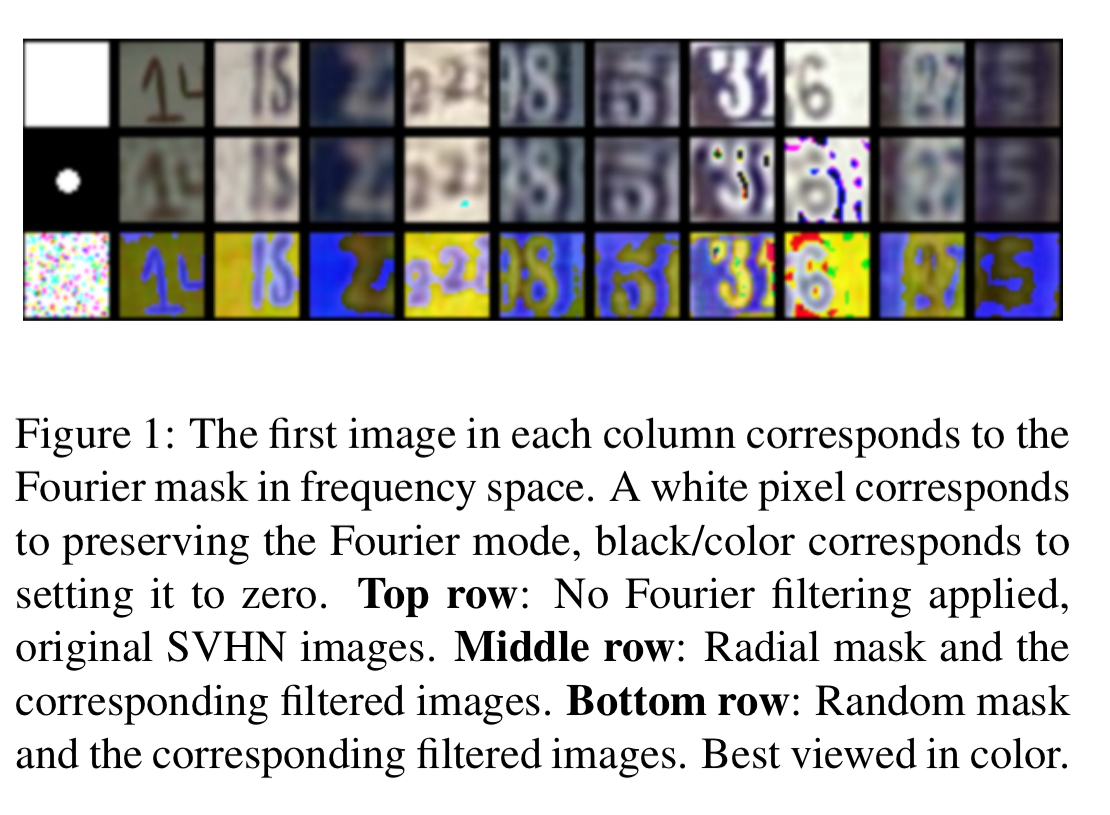 And this is the same thing, but for the CIFAR-10 dataset: 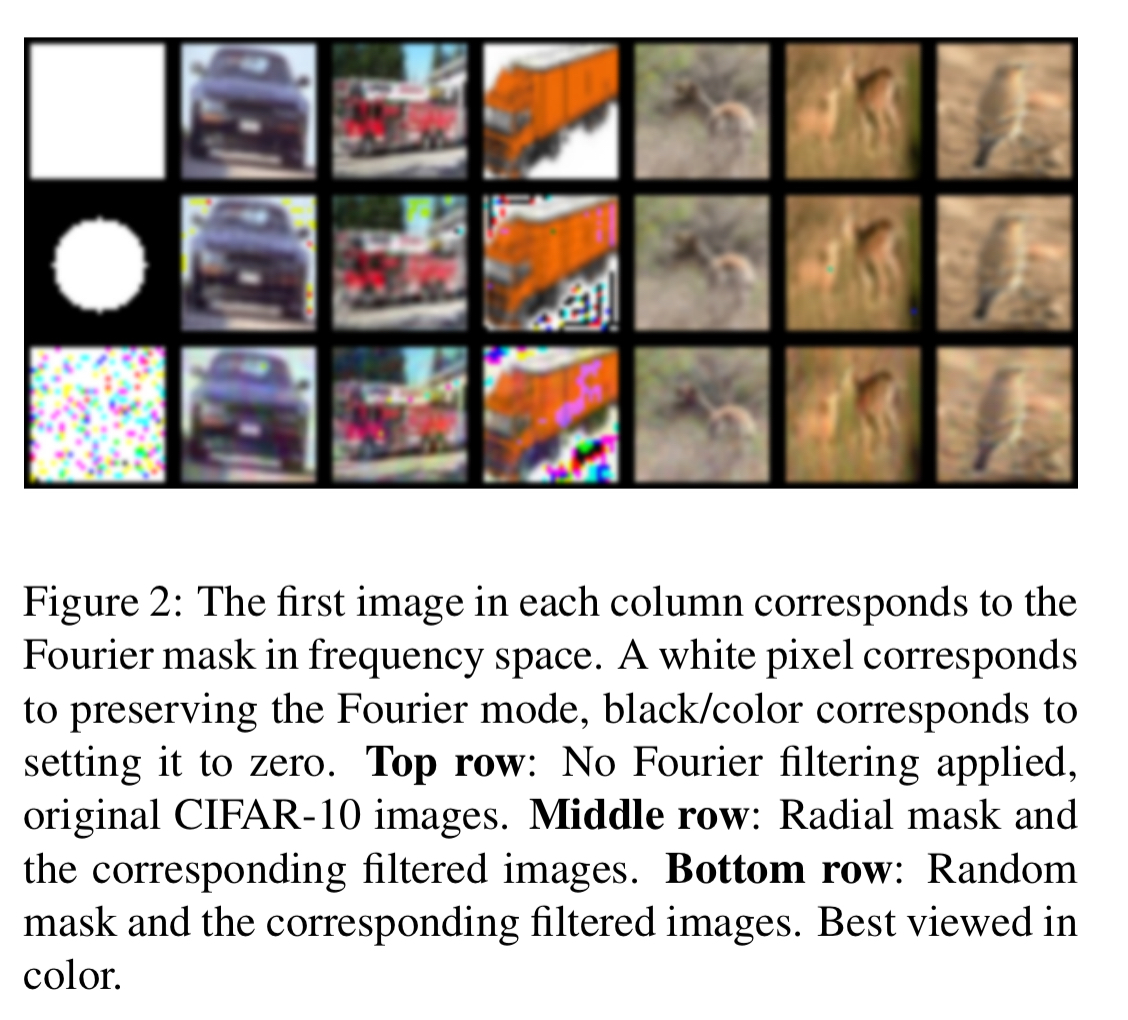 The filters do introduce artifacts into the images, but these don’t really interfere with human perception, and tend to occur in the background of the image.

For both the CIFAR-10 and SVHN datasets the authors use some established high-performance CNN architectures (Preact ResNet). A model is trained on one of the unfiltered, radial mask, or random mask datasets, and then tested across all three test groups (unfiltered, radial, random). This enables us to measure the test gap or generalisation gap as the maximum difference in accuracy across the test sets.

For the SVHN source dataset, the three figures below show the generalisation results after training on (a) unfiltered, (b) random, and (c) radial.

And here’s the same thing for CIFAR-10:

With CIFAR-10 the generalisation gaps are bigger: 28% when trained on randomly filtered data tested on radially filtered. Changing the depth has little impact in this case too.

In addition to still being recognisable to the human eye (a subjective measure), we know also know that networks trained on the filtered datasets actually generalised quite well to the unfiltered test set (off by 1-2% of the best unfiltered accuracy). This provides further evidence that the choice of Fourier filtering schemes is producing datasets that are perceptually not too far off from the original unfiltered dataset.

We see that deep CNNs trained on a unfiltered natural image dataset exhibit a tendency to latch onto the image statistics of the training set, yielding a non-trivial generalization gap…

When training on all three training sets (unfiltered, radial, and random) there is an improvement in the generalisation gap. “However, we cast doubt on the notion that this sort of data augmentation scheme is sufficient to learn higher level semantic features in the dataset. Rather it is far more likely that the CNNs are learning a superficial robustness to the varying image statistics.”

Overall, the data seems to support the initial hypothesis: “the current incarnation of deep neural networks have a tendency to learn surface statistical regularities as opposed to high level abstractions.”

What are we to do? I’m reminded of the brightly coloured word books we teach our children with – often with a single strong cartoon-like image of an object, on a plain white background, and the label (word) underneath. By seeing real world objects with movement (either of our own point of view, or because they have independent motion) we are also forced to more strongly separate object from background.