Social networks were meant to connect us and bring us together. This paper shows that while they might be quite successful at doing this in the small, on a macro scale they’re actually doing the opposite. Not only do they reinforce and sustain disparities among groups, but they actually reinforce the rate at which disparity grows. I.e., they’re driving us apart. This happens due to the rich-get-richer phenomenon resulting from friend/follow recommendation algorithms.

… we find that prominent social recommendation algorithms can exacerbate the under-representation of certain demographic groups at the top of the social hierarchy… Our mathematical analysis demonstrates the existence of an algorithmic glass ceiling that exhibits all the properties of the metaphorical social barrier that hinders groups like women or people of colour from attaining equal representation.

“In the social networks now governing the knowledge, jobs and deals one can seek, what matters most today is one’s position in the graph of advantageous connections.” It takes time and effort to build and maintain your connections. One of the key tools that social networks provide to help with this is algorithm recommendation of connections. I.e., “people you may know” on Facebook, “who to follow” on Twitter, and “suggested accounts” on Instagram. Unsurprisingly, and by design, these suggestions influence the networks that people end up building.

We build on a growing body of evidence that online services (including Twitter, TaskRabbit, and Airbnb) can reproduce well-know prejudices against historically under-represented groups. Issues raised include disparate treatment and evidence of a metaphorical glass ceiling. The latter denotes an invisible barrier preventing given demographics (most commonly females) from reaching superior levels of recognition.

The conditions for declaring the presence of a glass ceiling impacting a given demographic group are:

Consider the following chart, concentrating just on the blue circles to start with. 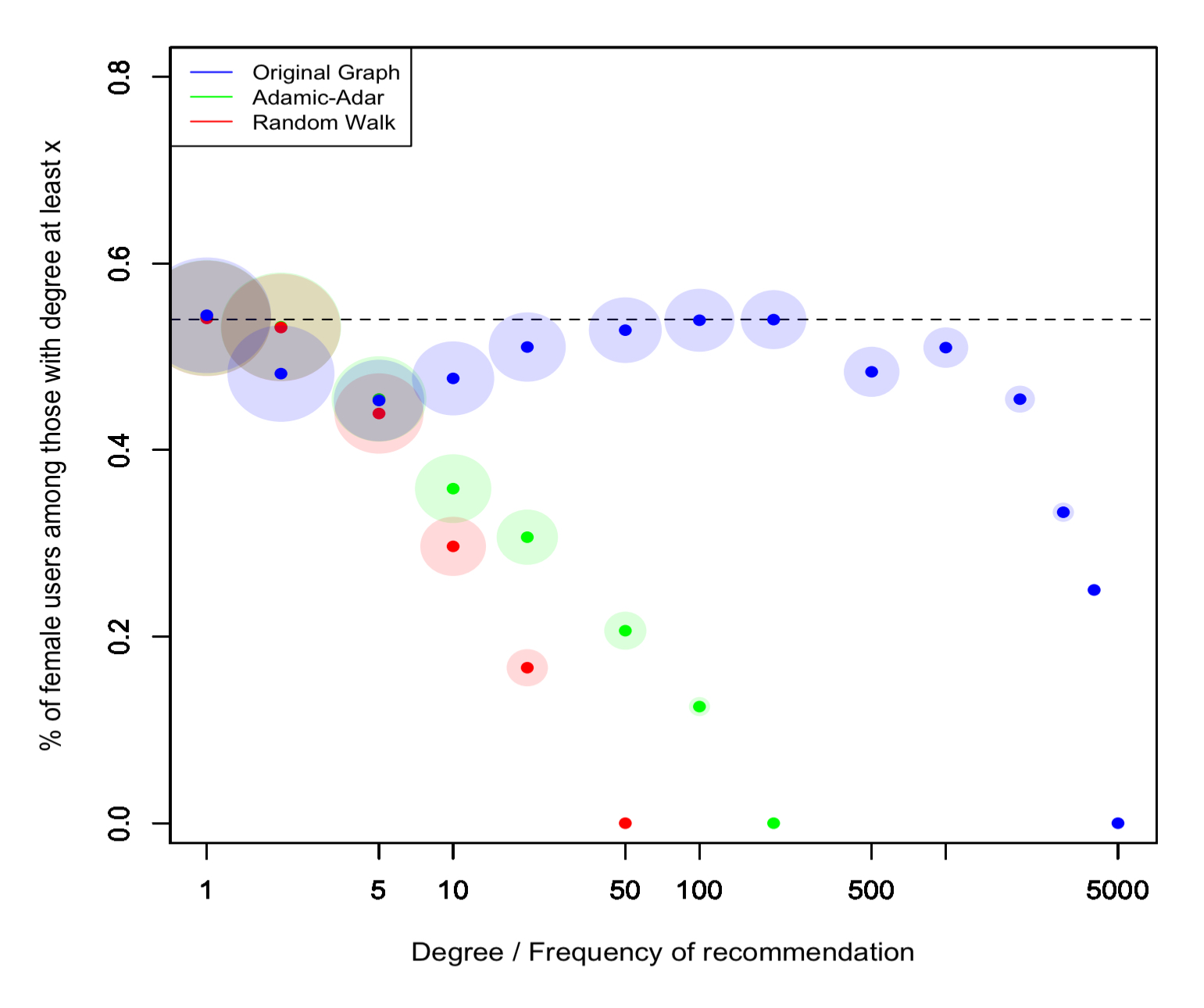 You’re looking at Instagram data collected over multiple months of 2014 and 2015, before Instagram’s “suggested accounts” feature was introduced. That is, it’s the result of organic growth. The horizontal dashed line shows the fraction of female users in the overall dataset (54.43%). On the x-axis we have increasing degree, and on the y-axis the percentage of female users among nodes with that degree. Women appear under-represented at the top of the hierarchy, but they are not completely excluded. The paper just rolls straight past this factual observation, since the authors are mostly interested in the comparison to algorithmic growth, but it’s worth pausing for a moment to think about what’s causing this result: it’s not what you’d expect from a straightforward ‘rich get richer’ model. It’s due to differential homophily between men and women. Men show a stronger bias towards connecting to other men than women do for connecting to other women. This happens even when controlling for content productivity.

Now take a second look at the chart, this time focusing on the blue and green circles. The x-axis is now representing the frequency with which a node is recommended as a connection, under approximations to two common recommendation strategies (the Adamic-Adar index and a random walk of length 2). There’s a much sharper drop-off for recommendations of female users under these algorithmic growth conditions. You can see it even more clearly in this log-log scale plot: 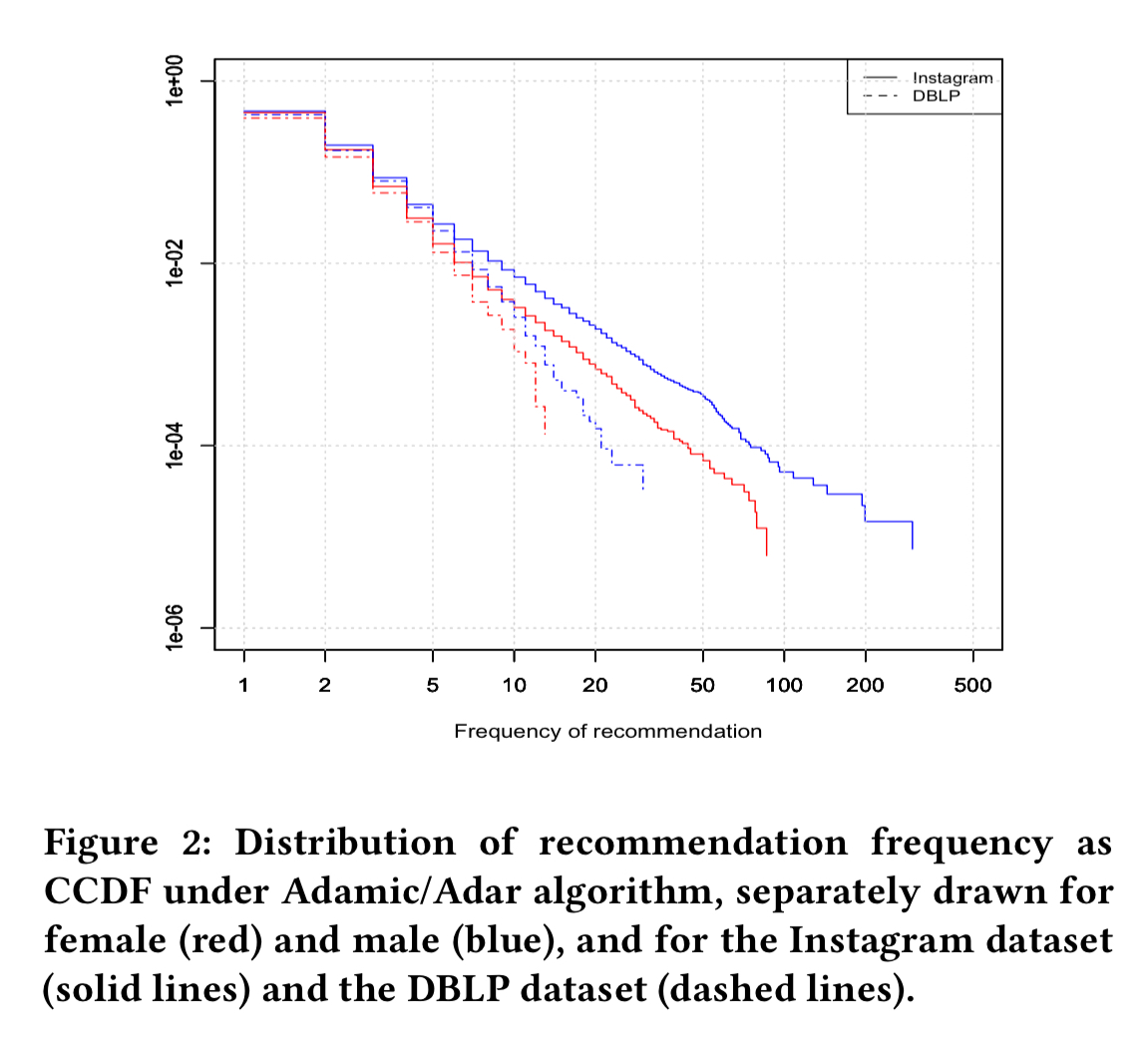 This gap, exhibited to grow in log-log scale, is a sign of different power coefficients governing the statistical chance to reach at least x recommendations, depending on gender. As one progressively selects to retain only the most successful individuals, the aforementioned effect translates into a sudden and accelerating drop of the observed fraction of females.

Again, simple homophily would suggest that females should be recommended more throughout, but differential homophily coupled with recommendation can rapidly overturn and invert the inequality. (Of course, if females showed stronger homophily than males, then the effect would be to even more rapidly increase the female advantage instead).

Consider a network with red and blue labelled nodes. In the organic growth model we have the following rules;

Then repeat the following steps until an edge is formed:

For algorithmic growth we make the following changes. Once a new node has entered the network as above, it connects through organic growth with probability

it will instead select a node

uniformly at random and follow a random walk of length 2 to choose a node. The chosen node is accepted if it is the same colour, and accepted with probability

if it is a different colour.

… the algorithms we analyzed do not create bias ex nihilo, but simply amplify bias in networks where it exists.

In section 5 of the paper the authors show the following under the organic model:

And under the algorithmic model: