Pinterest is a visual catalog with several billion pins, which are visual bookmarks containing a description, a link, and an image or a video. A major problem faced at Pinterest is to provide personalized, engaging, and timely recommendations from a pool of 3+ billion items to 200+ million monthly active users.

Pinterest’s scalable real-time recommendation system is called Pixie, and it currently drives more than 80% of all user engagement.

In the world of Pinterest, users view pins and curate them into collections called boards. There are hundreds of millions of users undertaking this manual categorisation of pins into boards.

Thus, we can think of Pinterest as a giant human curated bipartite graph of 7 billion pins and boards, and over 100 billion edges.

The central recommendation problem is this: given a query set Q comprising a set of pins and corresponding weights, return a set of pins (or boards) that the user may be interested in.

The query set Q is user-specific and is generated dynamically after every action of the user— most recently interacted pins have high weights while pins from a long time ago have low weights.

Among other things, Pixie recommendations are used to show a grid of pins in a user’s ‘homefeed’ (home page) that the user might find relevant to save in their board. Whenever a user clicks on a pin, Pixie is used to show related pins. When a user views one of their own boards, Pixie is used to suggest other pins to be saved to the board. Pixie is also used to recommend “Picked for you” boards.

These are only a few examples of applications that use Pixie — others include the email and personalized articles. Over half of all the pins that users save each day on Pinterest come from systems backed by Pixie.

Pixie generates recommendations using random walks. We start with a simplified random walk algorithm, and then transform it step by step into Pixie.

, and the total number of steps across all walks is N. The total time taken is determined by N, and is independent of the graph size. 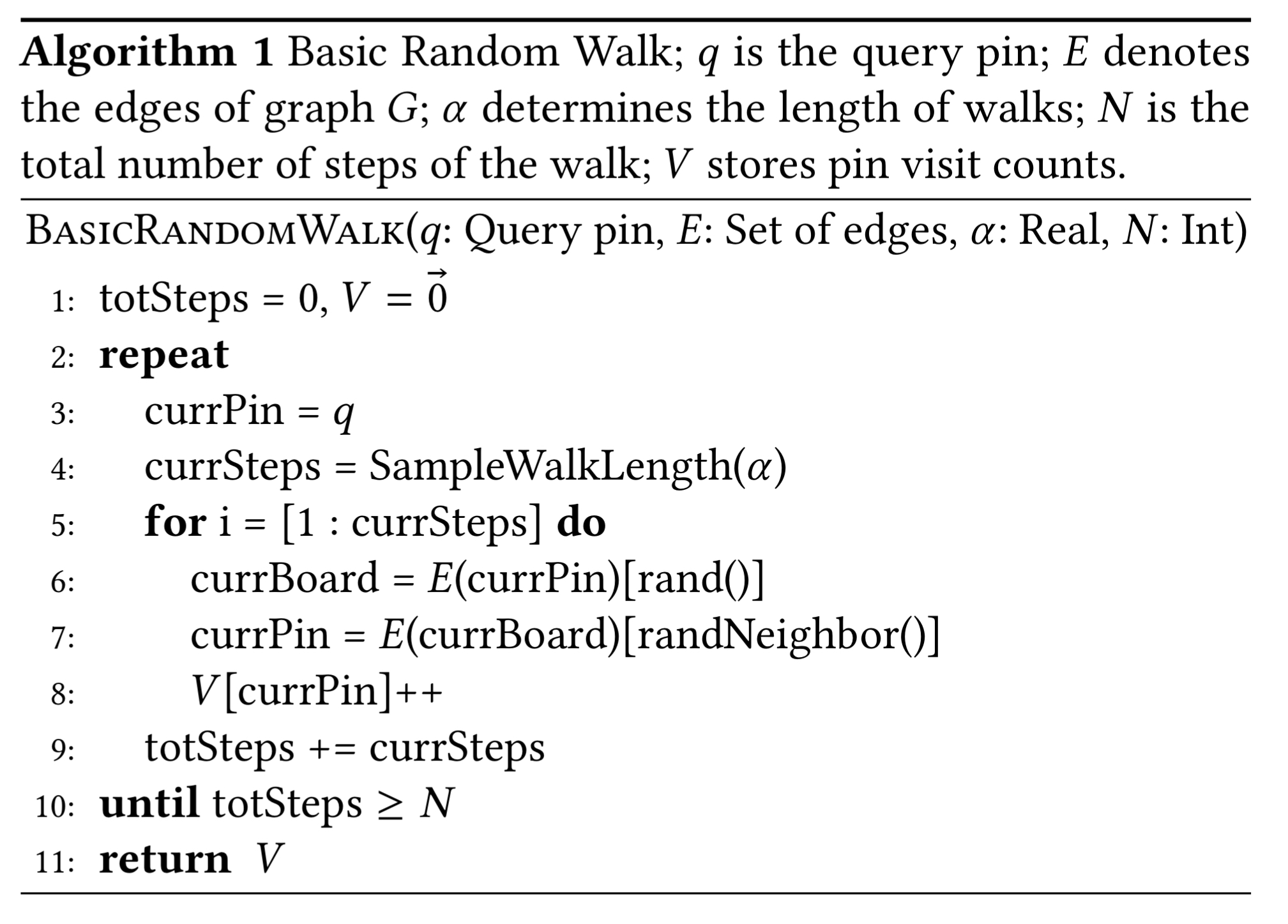 To arrive at the Pixie Random Walk algorithm we now need to apply four enhancements to the basic procedure above:

We want user-specific recommendations, even when starting from the same query pins. An example is biasing towards pins and boards in the same language as the user’s settings.

We solve the problem of biasing the random walk by changing the random edge selection to be biased based on user features… In practice, this modification turns out to be very important as it improves personalization, quality, and topicality of recommendations, which then leads to higher engagement.

The set of user features U are passed as an input to the process along with the query pins.

Pixie makes recommendations based on multiple input query pins, not just a single pin. Each pin in the query set is assigned a different weight based on the time and type of interactions the user has had with the pin. The random walk algorithm is run for each query pin in the set, with each run capturing its own set of visit counts.

An important insight here is that the number of steps required to obtain meaningful visit counts depends on the query pin’s degree. Recommending from a high-degree query pin that occurs in many boards requires many more steps than from a pin with a small degree. Hence, we scale the number of steps allocated to each query pin to be proportional to its degree.

For each pin a scaling factor

is calculated as follows, where C is the maximum pin degree in the graph.

Using the scaling factor, the number of steps

allocated to a query starting from pin q with weight

The visits counts generated from each query pin are them combined using the method described next.

Candidates with high visit counts from multiple query pins are considered more relevant to the query than candidates that may have an equally high visit count but where all of those visits come from a single query pin. Thus rather than simply aggregating visit counts across all seed pins, the following formula is used to combine them:

Since we’re making recommendations in real-time, and the user is waiting, faster response times are much better. Once a set of top candidate pins has become stable, we can terminate the random walking early. As an efficient approximation to this, Pixie stops when at least

candidate pins have been visited at least

times. The evaluation in the paper shows that such early stopping produces almost the same results as a long random walk, but in about half the number of steps. Thus it speeds up the algorithm by a factor of 2.

Combining all the elements above, we end up with the following: 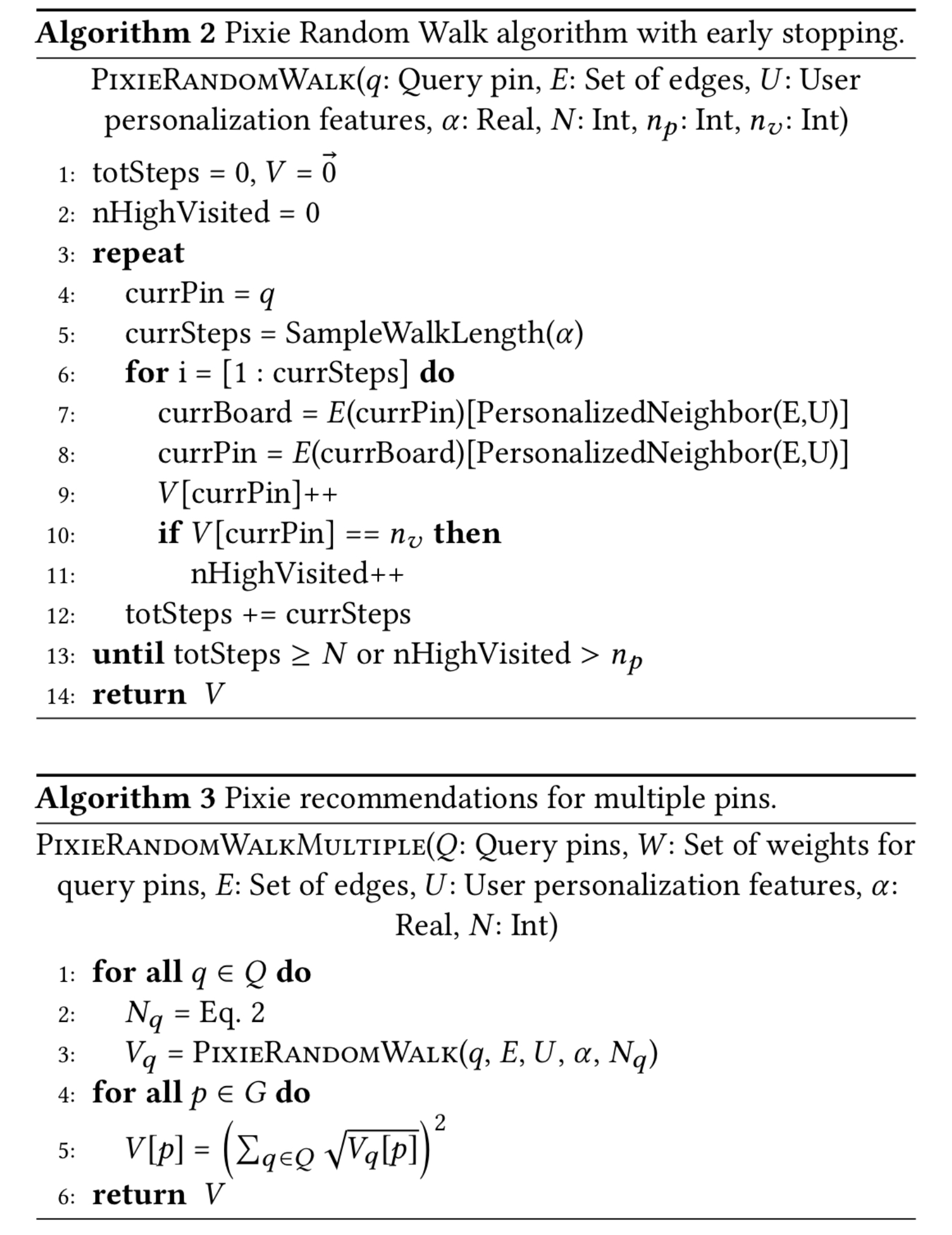 There’s still one more piece of the puzzle that is important to Pixie’s overall performance: pruning the graph that is used as input to the whole process.

The original Pinterest graph has 7 billion nodes and over 100 billion edges. However, not all boards on Pinterest are topically focused. Large diverse boards diffuse the walk in too many directions, which then leads to low recommendation performance. Similarly, many pins are mis-categorized into wrong boards. The graph pruning procedure cleans the graph and makes it more topically focused.

LDA topic models are run on each pin description in a board to obtain topic vectors. Boards with high entropy in topic vectors are removed from the graph, along with all their edges. Pin with very high degree are also pruned via selective edge removal, which discards edges connecting to boards where there is low cosine similarity between the topic vector of the pin and the board.

The pruned graph has approximately 1 billion boards, 2 billion pins, and 17 billion edges. In the evaluation, recommendations from the pruned graph are shown to be 58% more relevant to the user.

For each node edges are stored in an adjacency list, and the adjacency lists are concatenated into one contiguous edgeVec array. Visit counts are maintained in open addressing hash table with linear probing. The number of steps N provides an upper bound on the number of keys the hash table needs to support, and to avoid resizing an array of size N is conservatively allocated at the outset.

Pixie is deployed on Amazon AWS r3.8xlarge machines with 244GB of RAM. The pruned Pinterest graph fits into about 120GB of main memory. Having the whole graph in memory on a single machine means that:

Thanks to the high performance, scalability, and generic nature of the Pixie architecture and algorithms, we anticipate a bright future with new algorithms and graphs featuring novel node types and edge definitions for even more applications at Pinterest.