We’re still on the ‘beyond CPUs’ theme today, with a great paper from Microsoft detailing their use of FPGAs to accelerate networking in Azure. Microsoft have been doing this since 2015, and hence this paper also serves as a wonderful experience report documenting the thought processes that led to an FPGA-based design, and lessons learned transitioning an all-software team to include hardware components.

There’s another reminder here too of the scale at which cloud vendors operate, which makes doing a project like this viable. The bulk purchase of FPGAs keeps their cost low, and the scale of the project makes the development investment worthwhile.

One question we are often asked is if FPGAs are ready to serve as SmartNICs more broadly outside Microsoft… We’ve observed that necessary tooling, basic IP blocks, and general support have dramatically improved over the last few years. But this would still be a daunting task for a new team… The scale of Azure is large enough to justify the massive development efforts — we achieved a level of performance and efficiency simply not possible with CPUs, and programmability far beyond an ASIC, at a cost that was reasonable because of our volume. But we don’t expect this to be a natural choice for anyone beyond a large-scale cloud vendor until the ecosystem evolves further.

The investment in AccelNet certainly seems to be paying off when it comes to networking performance in Azure. Here’s a comparison of VM-VM throughput, average latency, and tail (P99) latency across Azure, AWS, and GCP:

The networking challenge with virtual infrastructure

In traditional virtual machine networking all network I/O to and from a physical device is performed in the host software partition of the hypervisor, with every packet sent and received processed by a virtual switch in the host networking stack. This of course burns a lot of CPU and increases latency.

The challenge is to get performance levels close to SR-IOV, while still delivering the SDN flexibility provided by VFP.

An initial analysis revealed that any solution would need to satisfy the following:

Serviceability cannot be bolted on later.

Custom ASIC designs provide the highest performance potential, but they’re harder to program and even harder to adapt over time. With a time lag of 1-2 years between requirement specifications and the arrival of silicon, the hardware was already behind requirements before it arrived. Couple that with a 5 year server lifespan and no easy way to retrofit most servers at scale, and you’re actually looking at a design that has to last for 7 years into the future. That’s like predicting what you need today back in 2011!

So ASICS are out.

At higher network speeds of 40GbE and above though, the number of required cores increases significantly and scattering and gathering packets becomes increasingly inefficient. “… 40GbE parts with software-based datapaths are already surprisingly large, power hungry, and expensive, and their scalability for 100GbE, 200GbE, and 400GbE looks bleak.”

So multicore SoC-based NICs are out.

FPGAs balance the performance of ASICs with the programmability of SoC NICs.

The key characteristics of FPGAs that made it attractive for AccelNet were the programmability to adapt to new features, the performance and efficiency of customized hardware, and the ability to create deep processing pipelines, which improve single-flow performance.

Note that Microsoft had already been running a multi-thousand node cluster of networked FPGAs doing search ranking for Bing, which improved their confidence in the viability of an FPGA-based design. However,…

… our networking group, who had until then operated entirely as a software group, was initially skeptical— even though FPGAs are widely used in networking in routers, applications, and appliances they were not commonly used as NICs or in datacenter servers, and the team didn’t have significant experience programming or using FGPAs in production settings.

Dedicated FPGA developers were added to the team, but not many— fewer than 5 at any given time.

AccelNet places the FPGA as a bump-in-the-wire between the NIC and the Top of Rack (TOR) switch, making it a filter on the network. The FPGA is also connected by 2 PCIe connections to the CPUs, so that it can be used for accelerator workloads like AI and web search. Below you can see pictures of (a) the first, and (b) the second generation of AccelNet boards.

The control plane is largely unchanged from the original VFP design and runs almost entirely in the hypervisor. The Generic Flow Table based datapath design is implemented in hardware. There are two deeply pipelined packet processing units, each with four major pipeline stages: 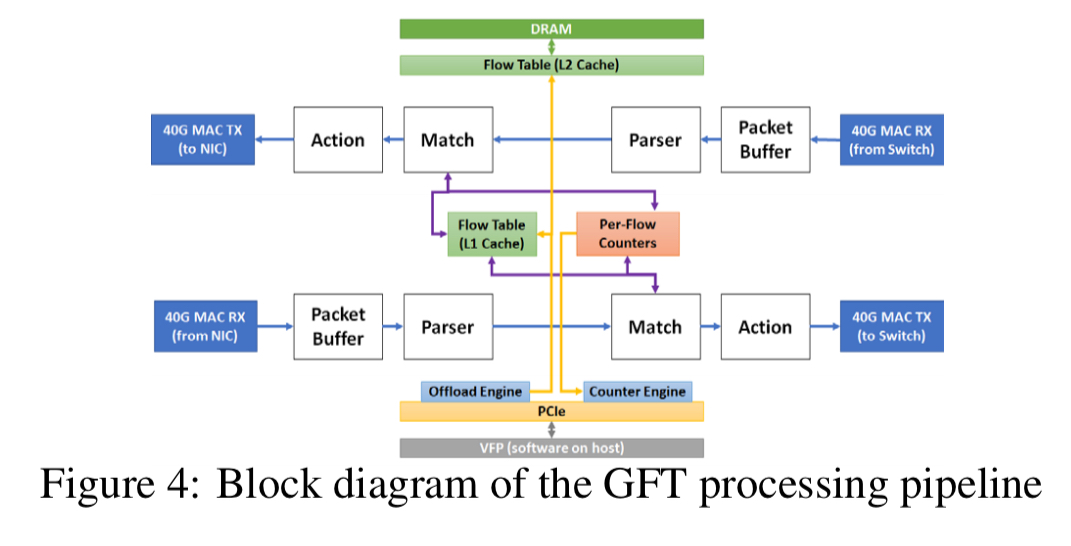 A key design goal is that TCP flows and vNICs should survive FGPA reconfiguration, FPGA driver updates, NIC PF driver updates , and Generic Flow Table updates. This is achieved via an intermediary (failsafe) Poll Mode Driver (PMD) which can bind to either the accelerated data path or the host software stack. When the hardware needs to be updated the failsafe driver switches to the VMBUS channels and the application sees no interruption bar reduced performance for a period of time. 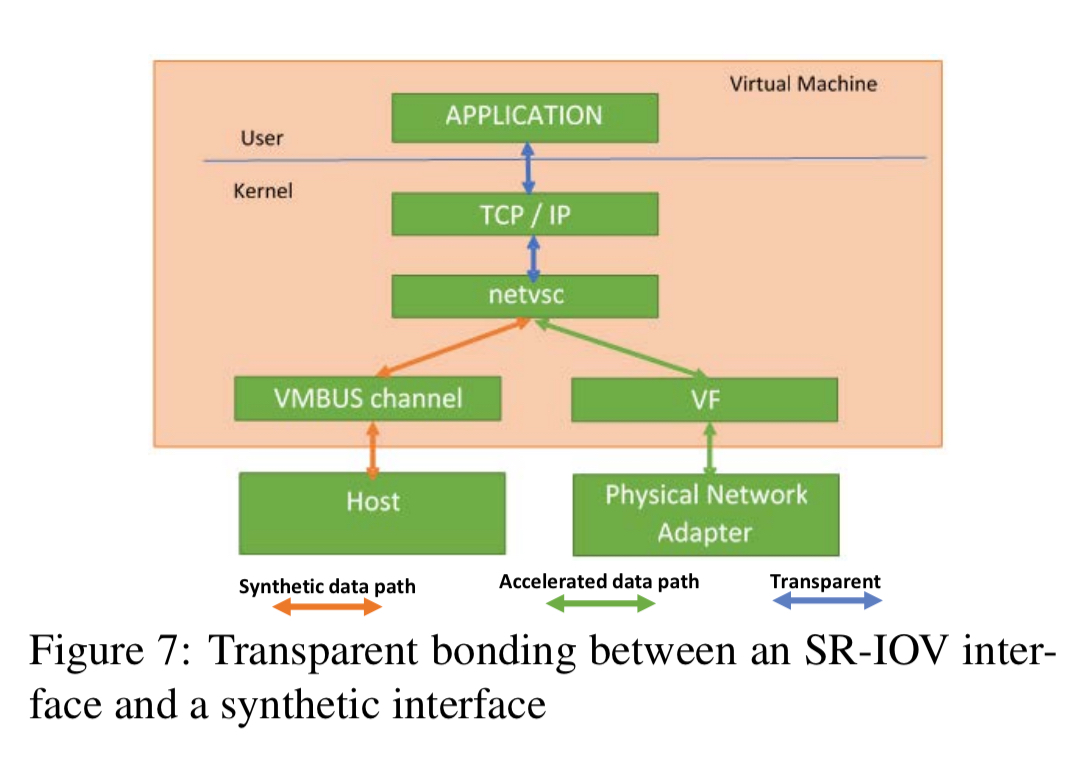 I raced through the description of AccelNet’s design, so that we could spend some time and space on lessons learned from the project, which are of interest beyond just this particular project.

Future work will describe entirely new functionality we’ve found we can support now that we have programmable NICs on every host.