With the slow demise of Moore’s law, hardware accelerators are needed to meet the rapidly growing computational requirements of X.

For this paper, X = genomics, and genomic data is certainly growing fast: doubling every 7 months and on track to surpass YouTube and Twitter by 2025. Rack-size machines can sequence 50 genomes a day, portable sequencers require several days per genome. Third-generation sequencing technologies are now available which produce much longer reads of contiguous DNA – on the order of tens of kilobases compared to only a few hundred bases with the previous generations of technology.

For personalized medicine, long reads are superior in identifying structural variants i.e. large insertions, deletions and re-arrangements in the genome spanning kilobases or more which are sometimes associated with diseases; for haplotype phasing, to distinguish mutations on maternal vs paternal chromosomes; and for resolving highly repetitive regions in the genome.

The long read technology comes with a drawback though – high error rates in sequencing of between 15%-40%. The errors are corrected using computational methods ‘that can be orders of magnitude slower than those used for the second generation technologies.’

This paper describes “Darwin”— a co-processor for genomic sequence alignment that , without sacrificing sensitivity, provides up to 15,000x speedup over the state-of-the-art software for reference-guided assembly of third-generation reads. Darwin achieves this speedup through hardware/algorithm co-design…

(corresponding to the four nucleotide bases) and tries to find the best match (alignment) with a reference sequence R, assigning each letter in R and Q to either a single letter in the opposite sequence, or to a gap. The scoring scheme rewards matching bases, and penalises mismatches and gaps. For example: 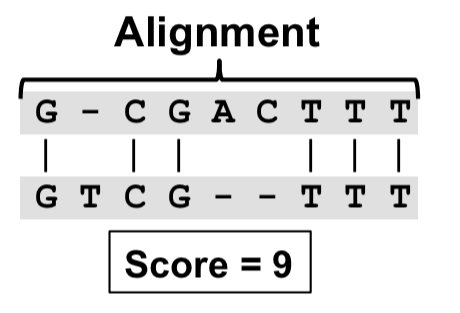 The seed-and-extend approach starts with substrings (the seeds) of fixed size k drawn from Q, and finds their exact matches in R (called seed hits). Once seed hits are found, the cells surrounding the hits are explored (using a dynamic programming approach). This avoids the high cost of exploring the full space. A drawback of the seed-and-extend approach is that alignments with no exactly matching substrings of length greater than or equal to k will not be discovered, reducing the algorithm’s sensitivity.

Sequencing is the process of shearing DNA molecules into a large number N of random fragments and reading the bases in each fragment. N is chosen such that each base-pair is expected to be covered multiple times, enabling errors to be corrected via a consensus mechanism.

Genome assembly is the process of reconstructing a genome G from a set of reads S. The reconstruction can be reference guided, using reference sequence R to guide re-assembly, or it can be de novo, reconstructing G from S without the benefit (and bias!) of R.

For long reads with high error rates, simple seeding algorithms like BLAST give a high false positive rate that results in excessive computation in the extend or alignment stage. To address this issue, Myers14 uses multiple seeds from Q, counting the number of matching bases in a band of diagonals and then filtering on a fixed threshold.

D-SOFT uses a similar filtering strategy, but with a different implementation.

D-SOFT filters by counting the number of unique bases in Q covered by seed hits in diagonal bands. If the count in a given band exceeds h bases, then the band is selected for alignment.

In the figure above, the X axis corresponds to positions in R, divided into

bins, each B bases wide. The Y axis corresponds to positions in Q. Ten candidate seeds from Q with length k=4 are used from consecutive positions, starting at position 1. Red dots mark the position of each hit in R, with the ‘tail’ of the dot covering k=4 bases in R and Q showing the extent of the match.

The count for a diagonal is then simply the number of bases in Q covered by seed hits in that band. In the example above, both Bin1 and Bin 3 have three seed hits, but in Bin 1 only 6 bases are covered, whereas in Bin 3 there are 9 covered bases. With the threshold h set to 8, only bin 3 will be chosen as a candidate.

Counting unique bases in a diagonal band allows D-SOFT to be more precise at high sensitivity than strategies that count seed hits, because overlapping bases are not counted multiple times.

Seed lookup is implemented using a seed position table: for each of the

possible seeds, a seed pointer table points to the beginning of a list of hits in a position table. 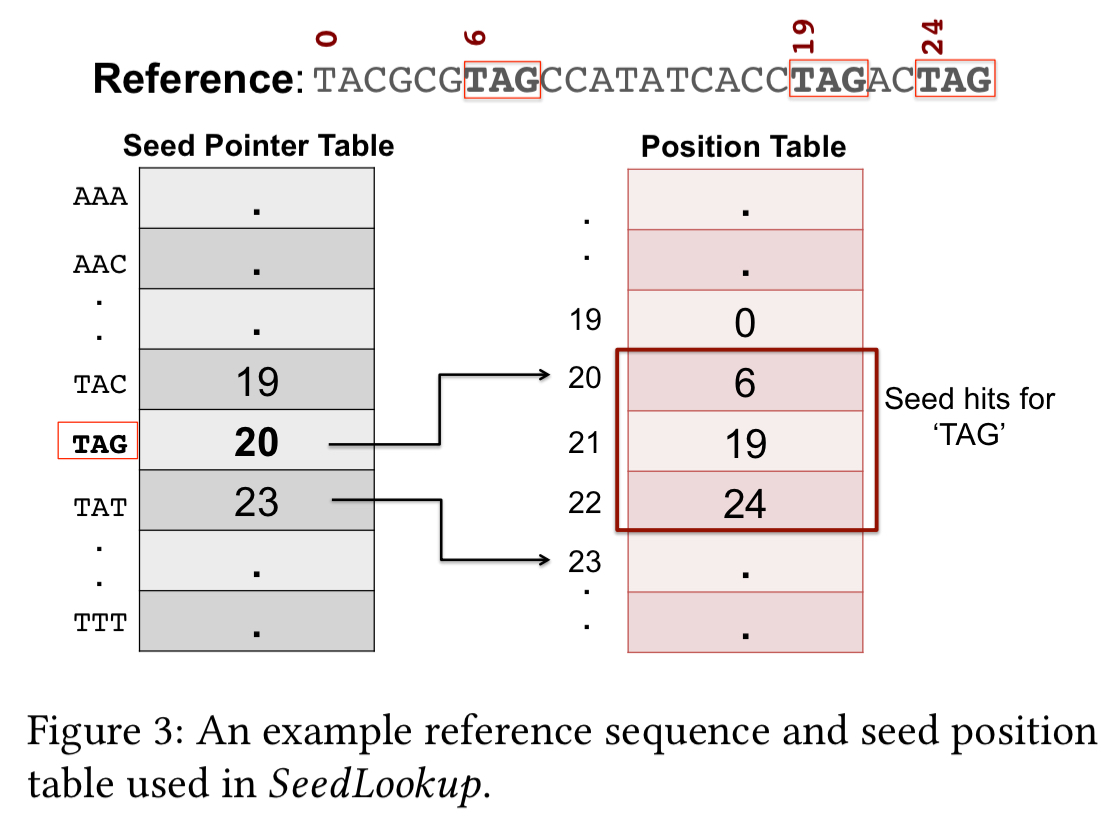 The D-SOFT accelerators maps the sequentially accessed seed tables to off-chip DRAM and places the randomly-accessed bin arrays in banks of on-chip SRAM. Incoming seeds are distributed over four DRAM channels, where a seed-position lookup block looks up the hits in the position table and calculates the bin of each hit. Bin-offset pairs are then sent via a network-on-chip to the on-chip SRAM bank associated with the bin.

With 64MB SRAMs divided into 16 banks, up to 32M bins can accommodate at 4Gbp reference sequence with B=128.

GACT performs the alignment extension part of a seed-and-extend system. It finds an arbitrarily long alignment extension in linear time by following the optimal path within overlapping tiles. GACT uses two parameters, the tile size T and an overlap threshold O (less than T). Empirically, we have found that GACT gives an optimal result (identical to Smith-Waterman) with reasonable values of T and Q. 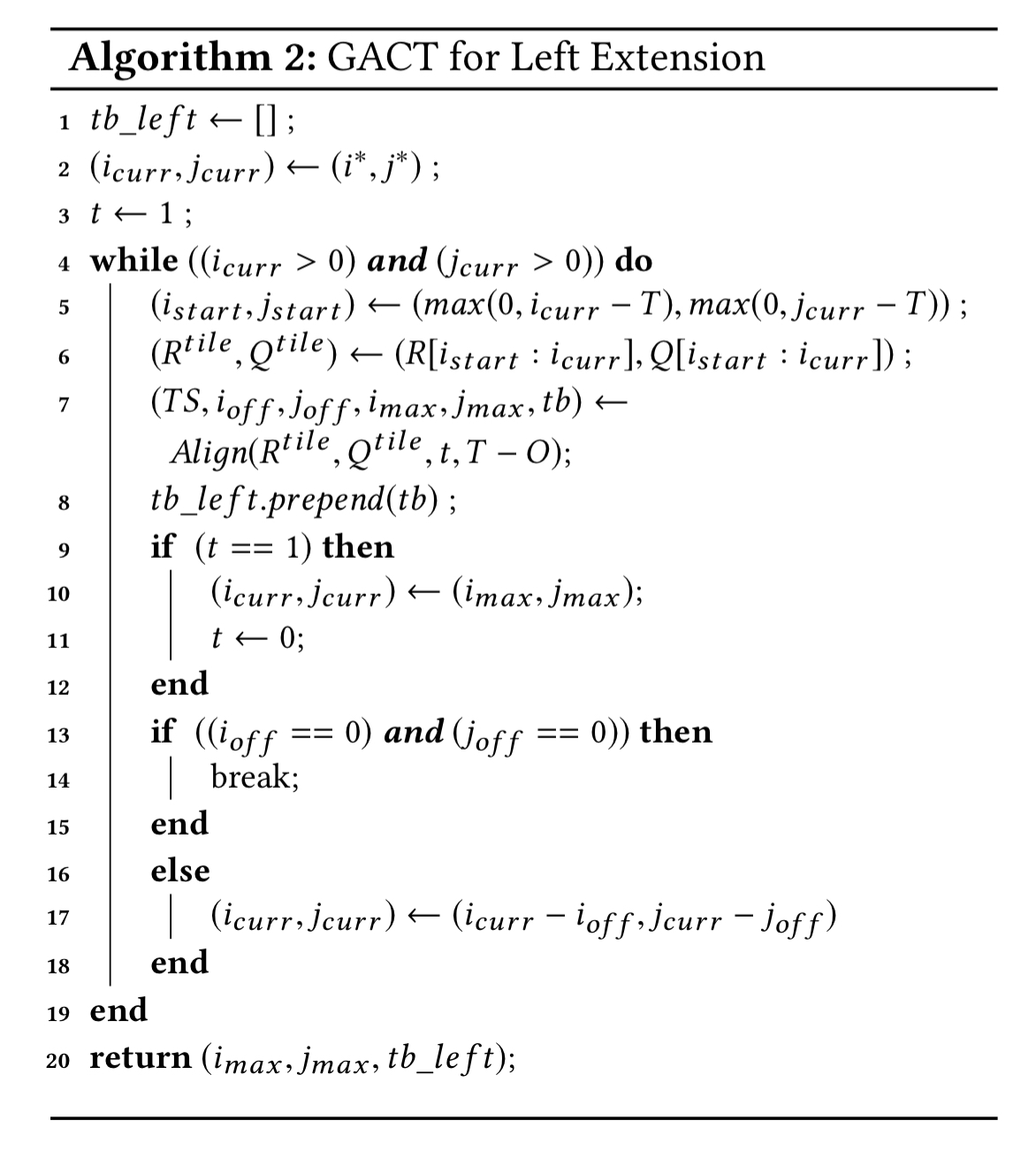 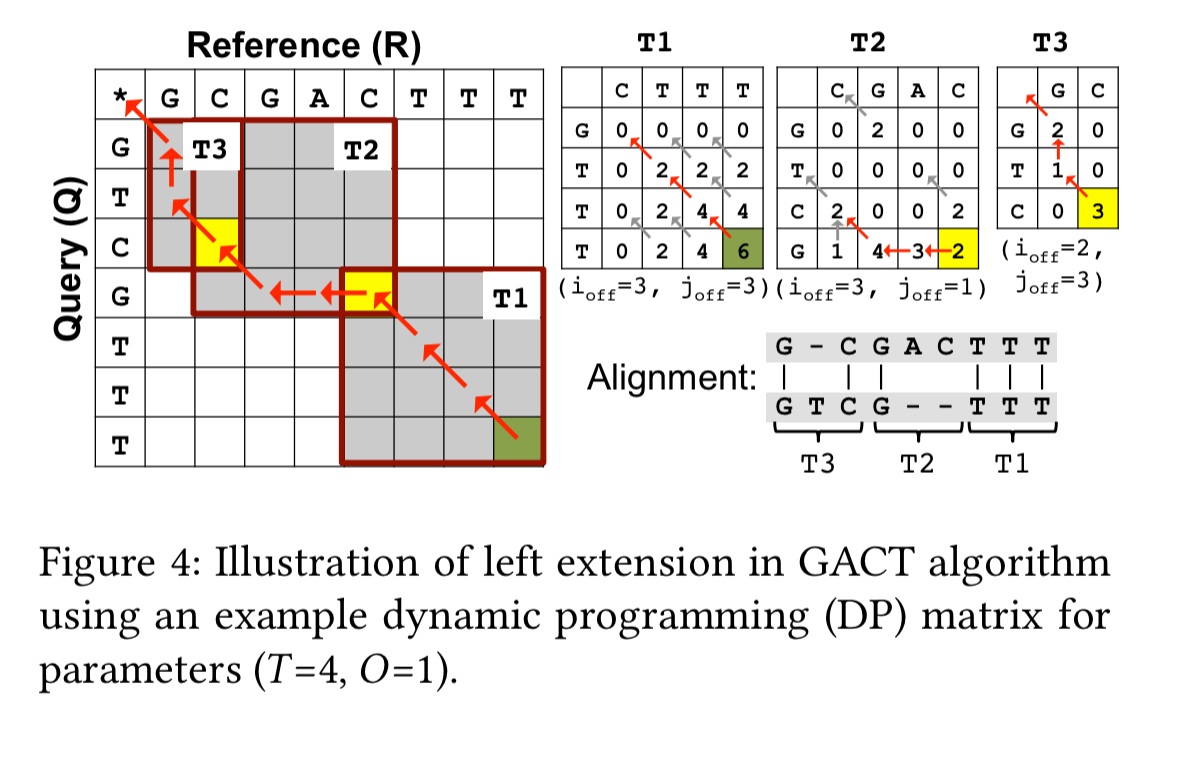 The GACT array accelerators handle the compute-intensive align routine in GACT, with the rest of the algorithm implemented in software.

A linear array of

processing elements (PEs) exploits wavefront parallelism to compute up to

cells of the DP-matrix for the Smith-Waterman algorithm with affine gap penalties. Each clock cycle, each PE computes three scores and one trackback pointer for one cell of the DP-matrix.

The three scores are the affine gap penalties for insertion and deletion, and the overall cell score. 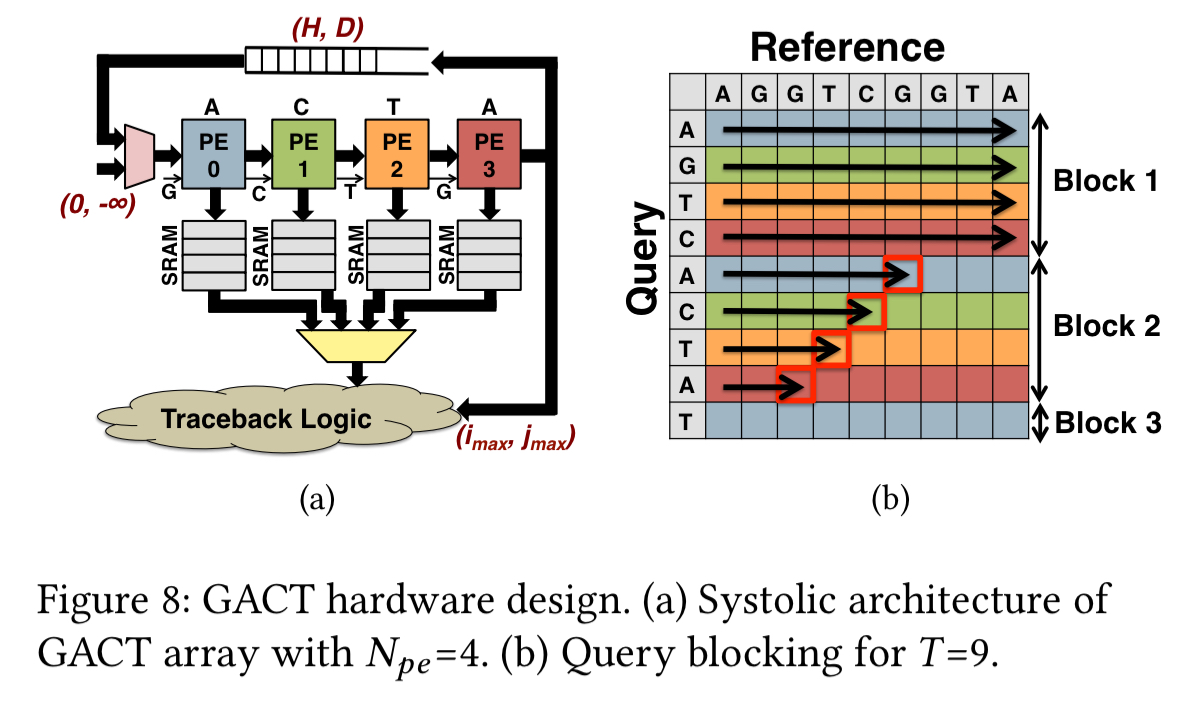 Darwin: putting it all together

The Darwin co-processor combines the hardware-accelerated GACT and D-SOFT algorithms. It uses four 32GB LPDDR4 DRAM memory channels, storing identical copies of the seed position table, the reference sequence, and the query sequences. This helps to keep all channels load-balanced and fully utilised at all times. 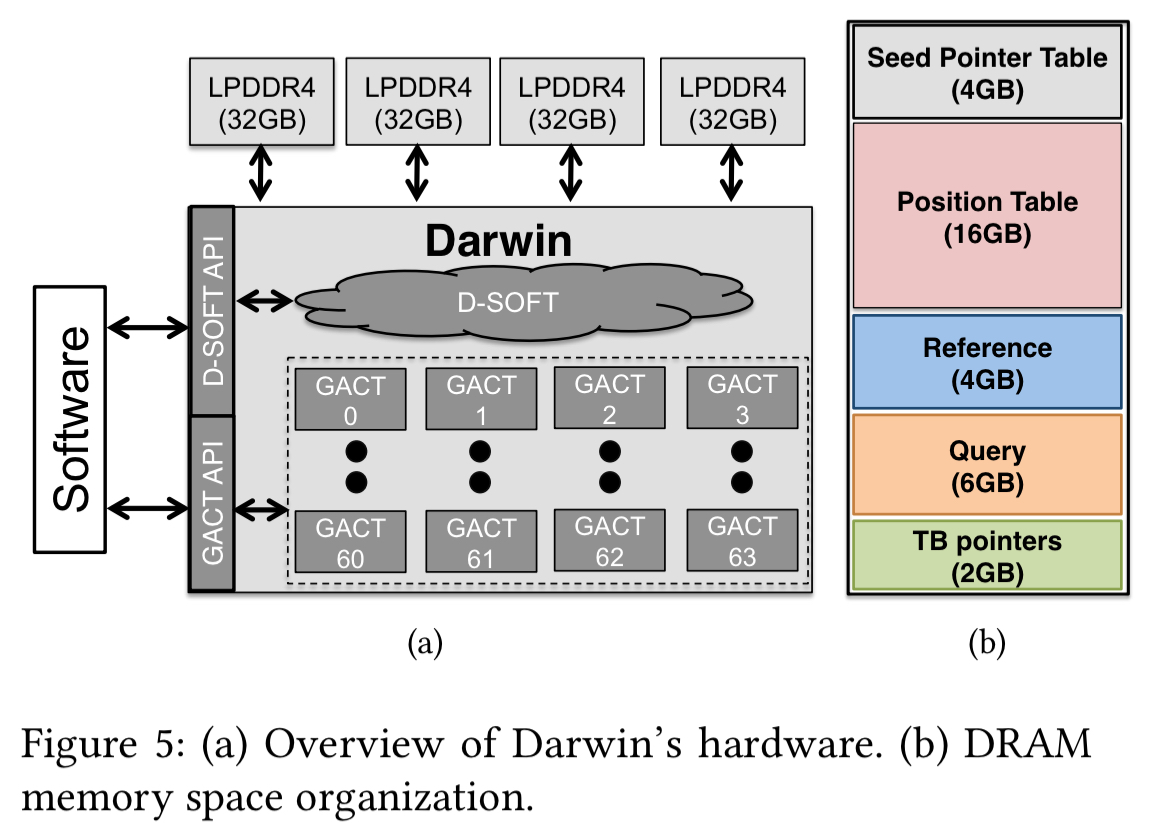 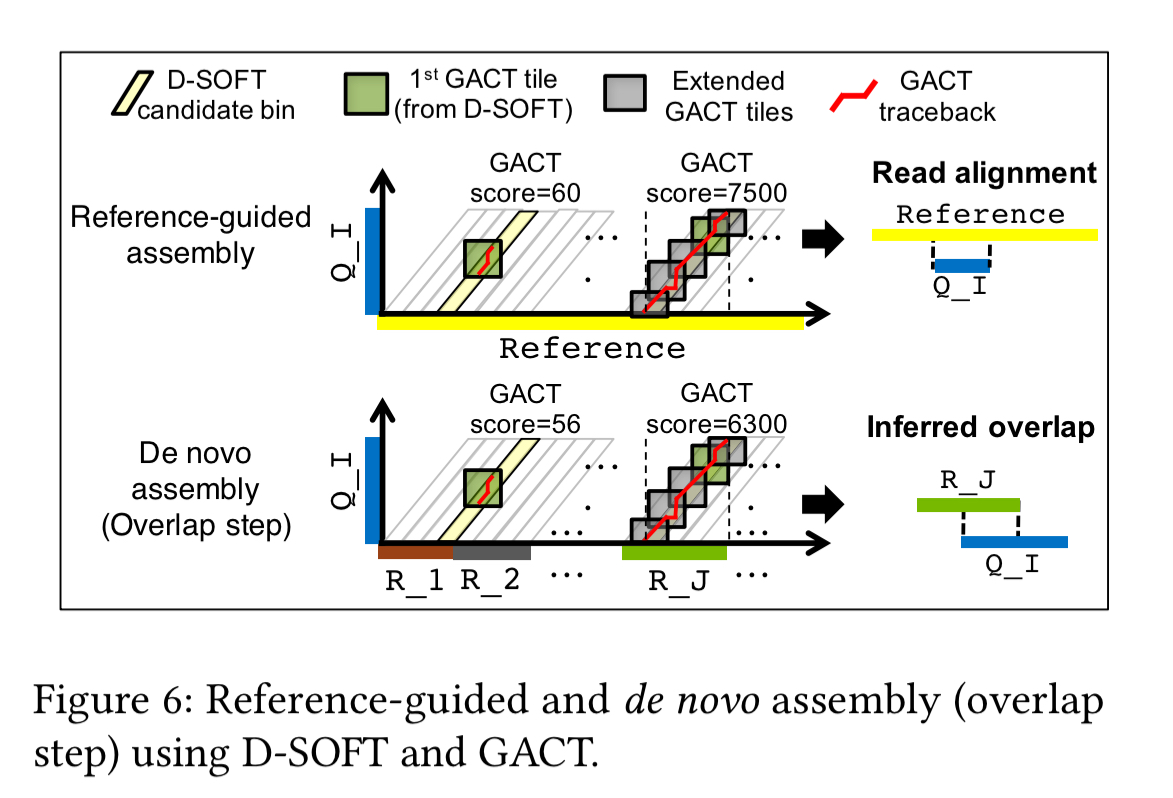 The assembly algorithms are partitioned between hardware and software as follows. Software initializes D-SOFT and GACT parameters and receives candidate alignment positions from D-SOFT, which is accelerated in hardware. Align – the compute extensive step in GACT – is hardware accelerated, the remainder of the alignment step is performed in software. Software also constructs the seed position table in de novo assembly.

The following table compares Darwin’s performance against baseline algorithms for reference-guided assembly of the human genome using 50,000 randomly sampled reads for each of three read sets, as well as de novo assembly of a C. elegans genome and a human genome. The D-SOFT parameters in Darwin are adjusted to match or exceed the sensitivity of the baseline technique. Darwin achieves speedups of up to 15,000x!

The following chart (log scale) shows the breakdown of where all those performance gains are coming from. 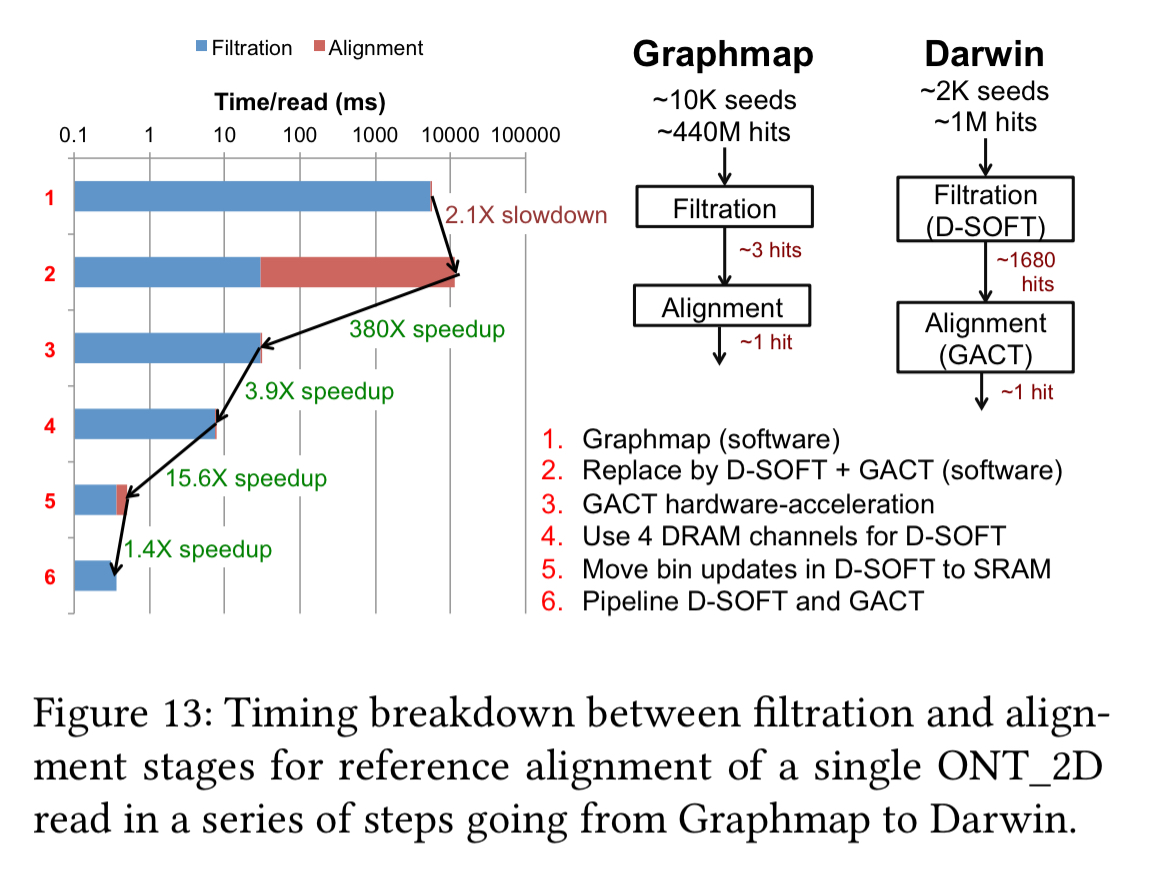 ASIC synthesis was carried out using the Synopsys Design Compiler in a TSMC 40nm CMOS process. The area and power breakdown of the different components of the ASIC are shown in this table: 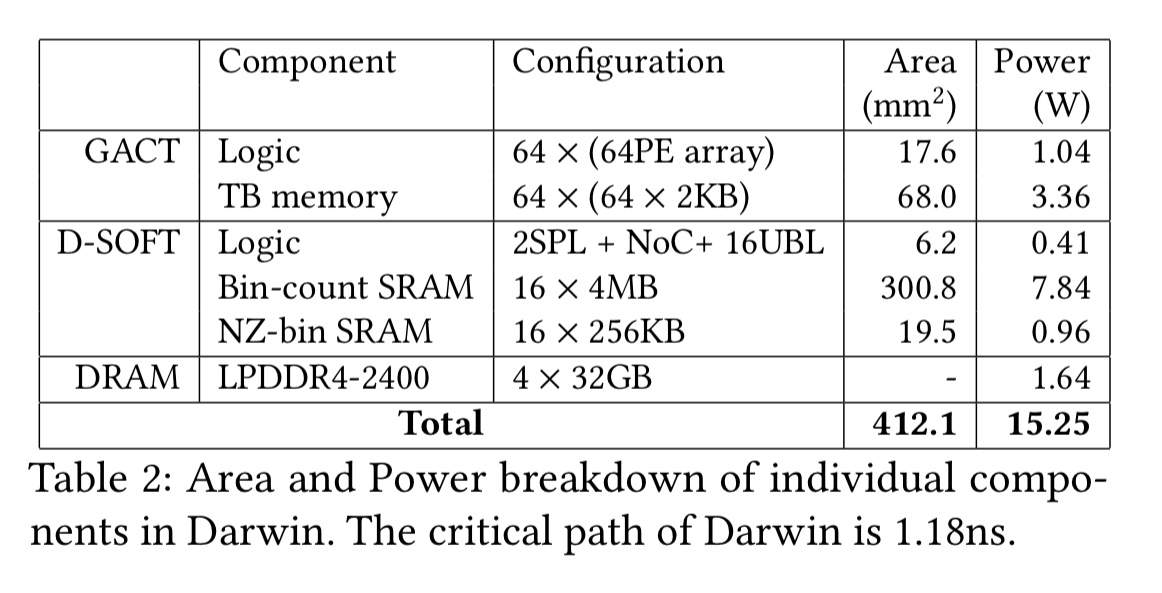 Darwin can operate at 847MHz (3.4x the FPGA frequency) with relatively small power consumption (about 15W). In a modern 14nm process Darwin would be much smaller (about 50mm squared vs 412mm squared) and consume even less power (about 6.4W).