Here’s the map for what we’ll be talking about today. We’ll discuss considerations for modifying and/or upgrading the way Bitcoin works, the world of altcoins, and uses beyond cryptocurrency. We’ll also touch briefly on issues of anonymity. 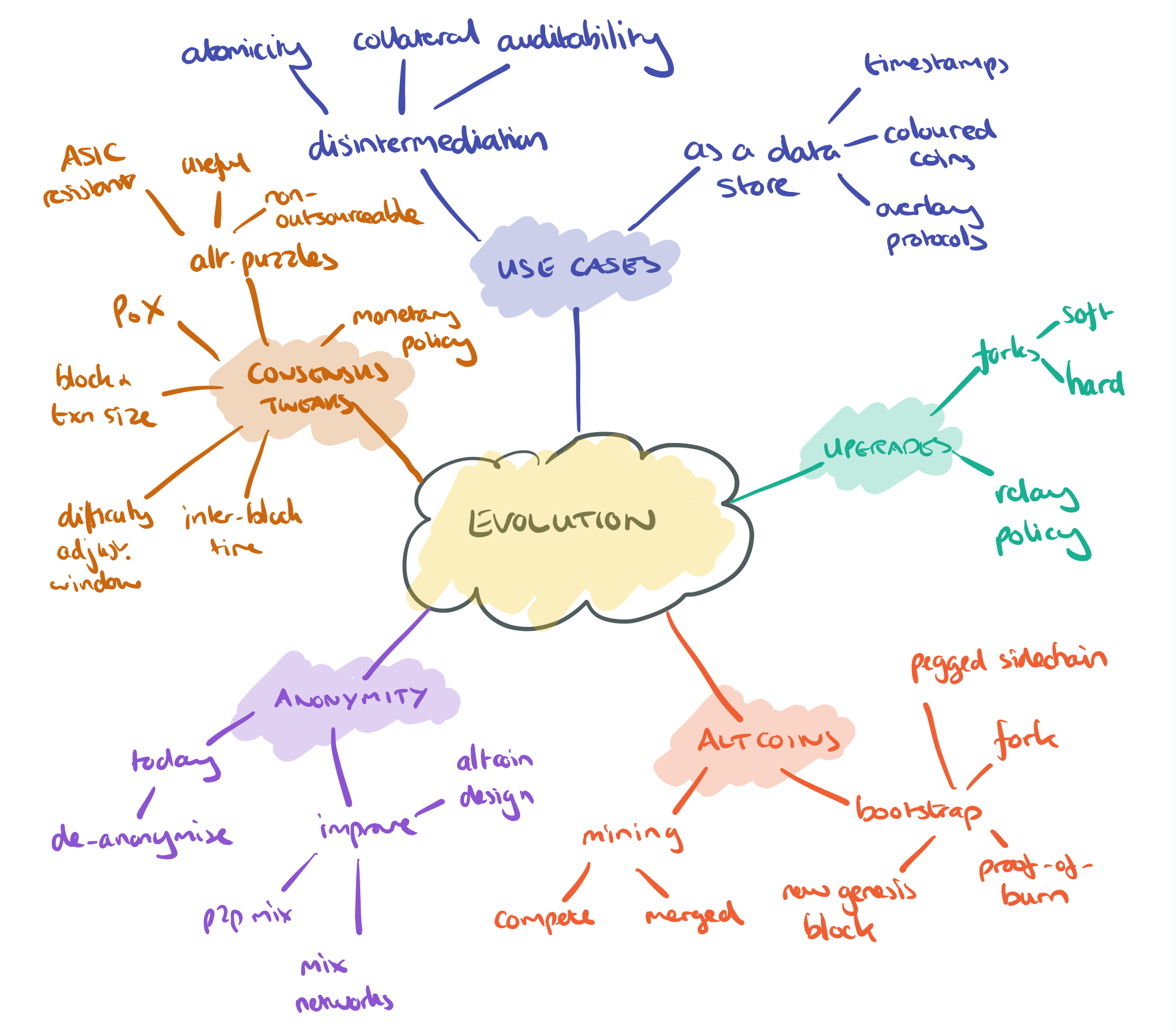 There are three primary mechanisms for upgrading the Bitcoin network:

Key parameters that can be varied in an upgrade are the inter-block time and difficulty adjustment window, limits on block and transaction size, and the monetary policy (rewards).

Bitcoin automatically adjusts the difficulty of its computational puzzle so that solutions are found (on average) ten minutes apart. This setting is constrained primarily by the network latency.

Reducing the difficulty means blocks are produced faster, improving throughput and latency, but it also means that miners are more likely to find redundant blocks that can’t be successfully propagated.

Writing in 2015, the authors say “One of the most controversial proposed changes is to increase the 1 MB limit on the size of a block.” This controversy continues today. Increasing the block size improves network throughput (which is currently very low for a global system), but it also increases storage requirements and decreases the average reward/transaction while most rewards come from mining a block. Thus miners that underpin the system are less incentivised to make the change. Maybe this will change again once per transaction fees become a significant part of revenue as block mining rewards decline. At that point, more transactions in a block is good for miners again.

The way that coins are issued is a key component of monetary policy:

Bitcoin’s consensus protocol effectively mandates a monetary policy through the rate at which new currency is minted and the schedule by which this rate changes. By mandating a capped amount of currency, Bitcoin effectively has a deflationary monetary policy which has caused multiple economists to predict the system will eventually be destabilized by a deflationary spiral in which nobody is willing to spend bitcoins as hoarding them is considered more profitable.

Other systems take different approaches. For example in Dogecoin inflation will continue indefinitely but at a harmonically-diminishing rate, and in Freicoin the inflation rate stays constant forever.

Within the proof-of-work system, another variable is the puzzle used to prove work. One school of thought is that the puzzle should not favour those who invest in dedicated hardware (returning to the democratic principles of “one CPU, one vote”). Another variant is non-outsourceable puzzles which would discourage the formation of mining pools. Finally, there are puzzles which perform some useful work as a side-effect.

We studied systems beyond Nakamoto consensus earlier this week, so I won’t repeat that discussion here.

Due to the limits on what can be changed about Bitcoin without a hard fork, hundreds of derivative systems, referred to as altcoins, have arisen with alternate design approaches.

Altcoins need a way to bootstrap the initial allocation of currency, and there are several ways of doing this:

Altcoins also need miners (we saw some of the issues surrounding this when we looked at Blockstack last week). The two primary options are to compete for miners, by encouraging them to spend their compute resources mining on your chain rather than competing chains, or to adopt something called merged mining, in which an altcoin accepts blocks if their root is included in a valid Bitcoin block, and hence miners do not need to do any additional work. Merged mining has its own problems however, including preventing the altcoin from deviating from Bitcoin’s computational puzzle.

We’ve studied privacy and anonymity in Bitcoin previously on The Morning Paper: (‘A fistful of bitcoins’, ‘ZeroCash’).

Bitcoin provides a limited form of unlinkability: users may trivially create new pseudonyms (addresses) at any time. This was argued in the original specification to provide strong privacy, however it quickly became clear that due to the public nature of the blockchain it is sometimes possible to trace the flow of money between pseudonyms and conclude that they are likely controlled by the same individual.

Beyond Bitcoin, systems such as ZeroCash build stronger privacy in by design.

Bitcoin has three characteristics that make it suitable for disintermediation use cases beyond just cryptocurrencies:

An alternate approach to extending Bitcoin is to use it only as a global append-only log to which anybody can write.

Section IV of the paper also contains a short discussion on key management issues for clients. For a fuller treatment of this see ‘A first look at the usability of Bitcoin key management.’

Another important area to understand is smart contracts. They turn out be very tricky to get right! For previous posts on The Morning Paper discussing the challenges of smart contracts see:

On the whole, we simply don’t have a scientific model with sufficient predictive power to answer questions about how Bitcoin or related systems might fare with different parameters or in different circumstances… It is difficult today to assess the extent to which Bitcoin’s success compared to altcoins is due to its specific design choices as opposed to its first-mover advantage.

Bitcoin is a rare case where practice seems to be ahead of theory. We consider that a tremendous opportunity for the research community to tackle the many open questions about Bitcoin which we have laid out.