The authors of this paper wrote it out of a concern for the potential abuse of smart contracts for criminal activities. And it does indeed demonstrate a number of ways smart contracts could facilitate crime. It’s also though, another good case study in considerations when designing smart contracts. After all, the stakes are rather high – it’s not just financial considerations but also personal liberty at risk if caught – and the participants certainly may not be trustworthy.

In this paper, we explore the risk of smart contracts fueling new criminal ecosystems. Specifically, we show how what we call criminal smart contracts (CSCs) can facilitate leakage of confidential information, theft of cryptographic keys, and various real-world crimes (murder, arson, terrorism).

Core to the design of the smart contracts (CSCs) is a property the authors call commission-fairness. Commission fairness says that we must guarantee both the commission of a crime and commensurate payment for the perpetrator, or neither. Of course, the fairness issue also applies to many smart contracts in which we want to guarantee either the promised outcome plus payment, or neither. What looks like a fair exchange on the surface can often hide mechanisms that allow a party to a CSC to cheat.

Correct construction of CSCs can thus be quite delicate… As our constructions for commission-fair CSCs show, constructing CSCs is not as straightforward as it might seem, but new cryptographic techniques and new approaches to smart contract design can render them feasible and even practical. … While our focus is on preventing evil, happily the techniques we propose can also be used to create beneficial contracts.

Decentralized smart contracts have a number of advantages that can benefit criminals:

Even before smart contracts, just the pseudonymity offered by cryptocurrencies has been happily embraced by criminals, so there’s every reason to think the same path might be taken with smart contracts.

A major cryptovirological “improvement” to ransomware has been use of Bitcoin, thanks to which CryptoLocker ransomware has purportedly netted hundreds of millions of dollars in ransom.

There are of course questions concerning just how good the anonymity provided by Bitcoin really is, but there are also schemes being developed that improve on this situation. And as the authors point out, “Ron and Shamir provide evidence that the FBI failed to locate most of the Bitcoin holdings of Dread Pirate Roberts (Ross Ulbricht), the operator of the Silk Road, even after seizing his laptop.”

The first example scenario is payment-incentivised leakage of information. For example, I have access to pre-release Hollywood movies, trade secrets, government secrets, proprietary source code, industrial designs and so on. If you pay me, I’ll reveal the information (in the basic design, to the world, and then in a revision just to the payer).

Darkleaks is such a system built on top of Bitcoin, but it has some limitations and can only serve to leak secrets publicly, it has no facility for fair exchange in a private leakage scenario. With smart contracts, we can do much better…

Some challenges we need to overcome in the design of the contract include:

and partition it into

. Consider first the scenario where

wants to sell it for public release. The seller randomly generates a master secret key, msk, and provides a cryptographic commitment

of the master secret key to the contract. (pk is the public key of a Bitcoin account for receiving payment). 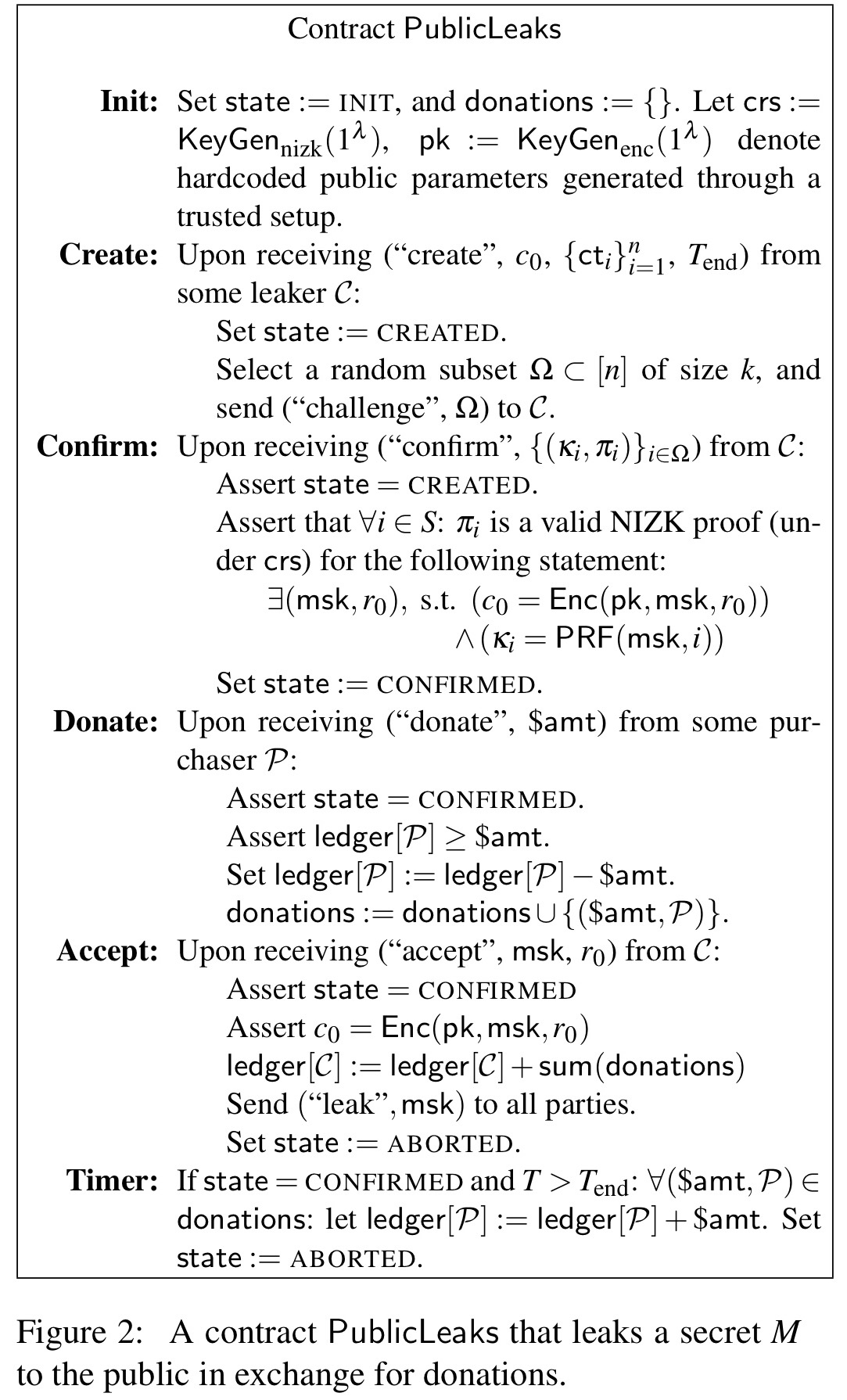 To support private leakage (see appendix F.3!) the leaker does not reveal the master secret key directly, but instead provides a ciphertext

to the contract for a purchaser

, along with a proof that

The second scenario is a contract offering a reward for provision of a private key (e.g., of a victim certificate authority). I’ll go over this one more briefly. An initial attempt at the contract might look something like this: 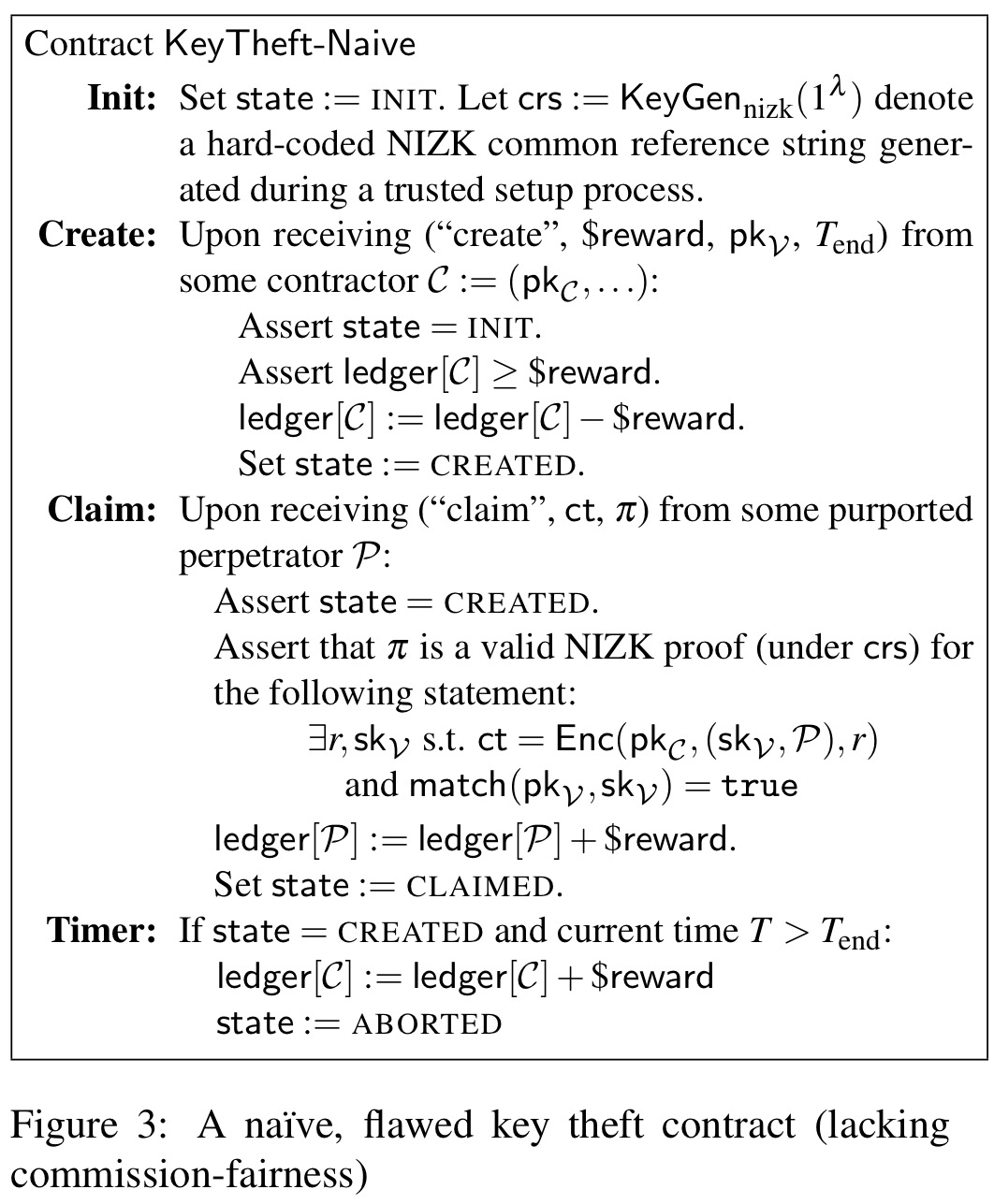 There are two weaknesses in the above protocol though: it is vulnerable to revoke-and-claim attacks and rushing attacks.

In a revoke-and-claim attack the target CA can revoke its own key and then submit the (now useless) key for payment. So the target of the attack actually ends up profiting from it! The contract is not commission fair in the sense that it doesn’t currently promise to deliver a usable private key.

To defend against revoke and claim attacks, a reward truncation feature is added to the contract. This enables the contract to accept evidence of a key revocation at any point in time. This could be submitted by the contractor, or the contractor could even provide a small reward to a third-party submitter. The payout in the contract for provision of a private key then becomes a function of how long the key remains valid for. It still seems to me that a revoke-and-claim attacker that revokes a key and immediately submits a claim still has a good chance of avoiding the detection window before their claim is processed.

To defend against rushing attacks the claim is separated into two phases. In the first phase a perpetrator expresses an intent to claim by submitting a commitment of the real claim message. Not explicitly stated (that I could see), but I presume this state in the contract ‘locks’ the reward for submitter. In the next round (once the submitter can see that their commitment is accepted) they can open the commitment revealing the claim message, and receive payment. 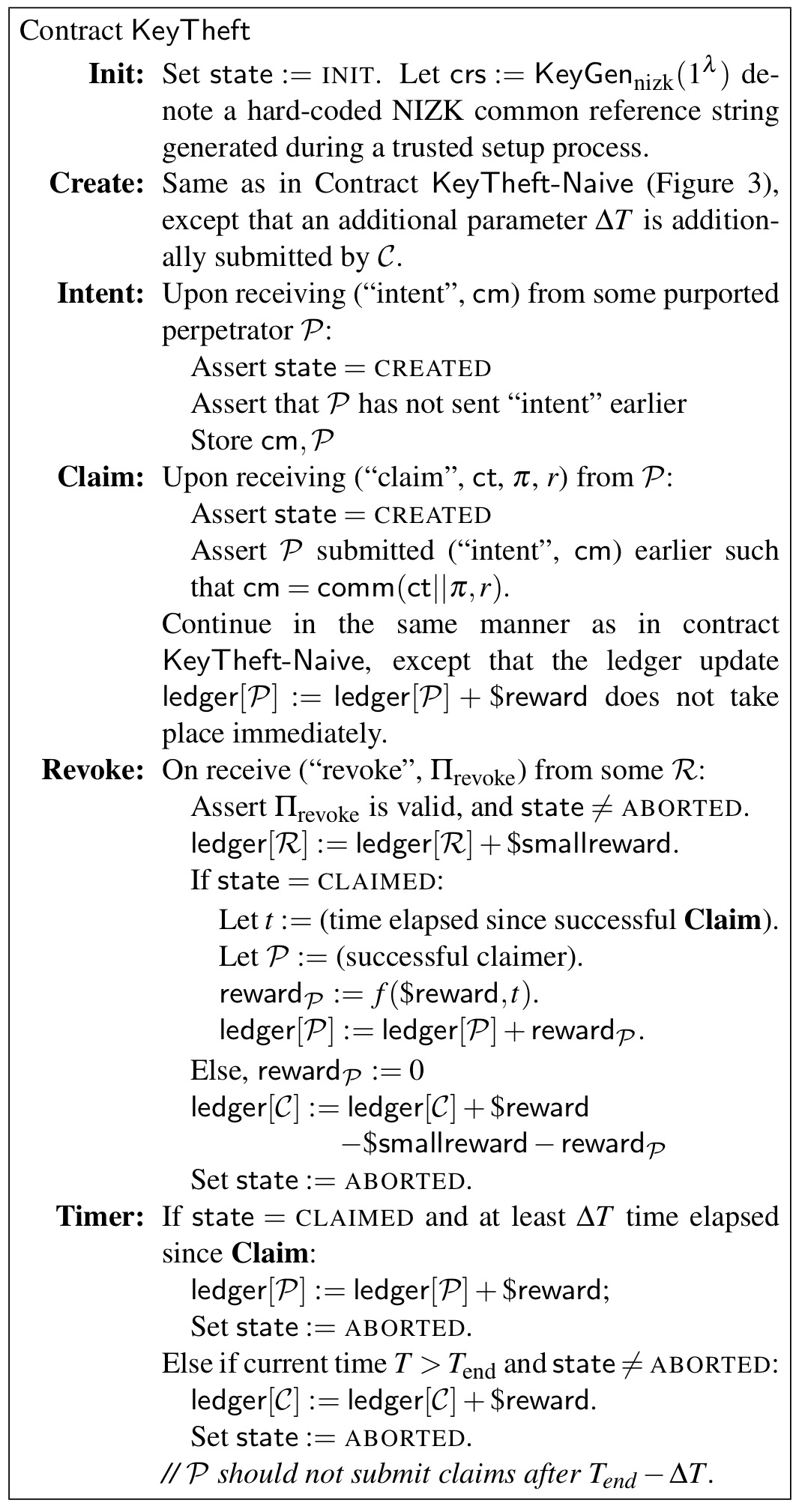 The paper also discusses variants where the contract targets multiple victims at once, and where false cover claims can be used to leave victims unsure whether or not a successful claim has been committed.

A calling card is an unpredictable feature of a to-be-committed crime – for example, a day, time, and place. Given a contract for an assassination for example, an assassin can specify a day, time, and place. If the victim is indeed killed at that time and location, then the contractor can be reasonably sure the assassin is responsible and release payment.

Calling cards, alongside authenticated data feeds, can support a general framework for a wide variety of CSCs.

As a example, consider a contract for web site defacement. The contractor specifies a website url to be hacked and a statement to be displayed.

is a timestamp, denoted for simplicity in contract time. (For efficiency,

might be a hash of and pointer to the page content.) Such a feed might take the form of, e.g., a digitally signed version of an archive of hacked websites (e.g., zone-h.com).

We can then proceed as follows: 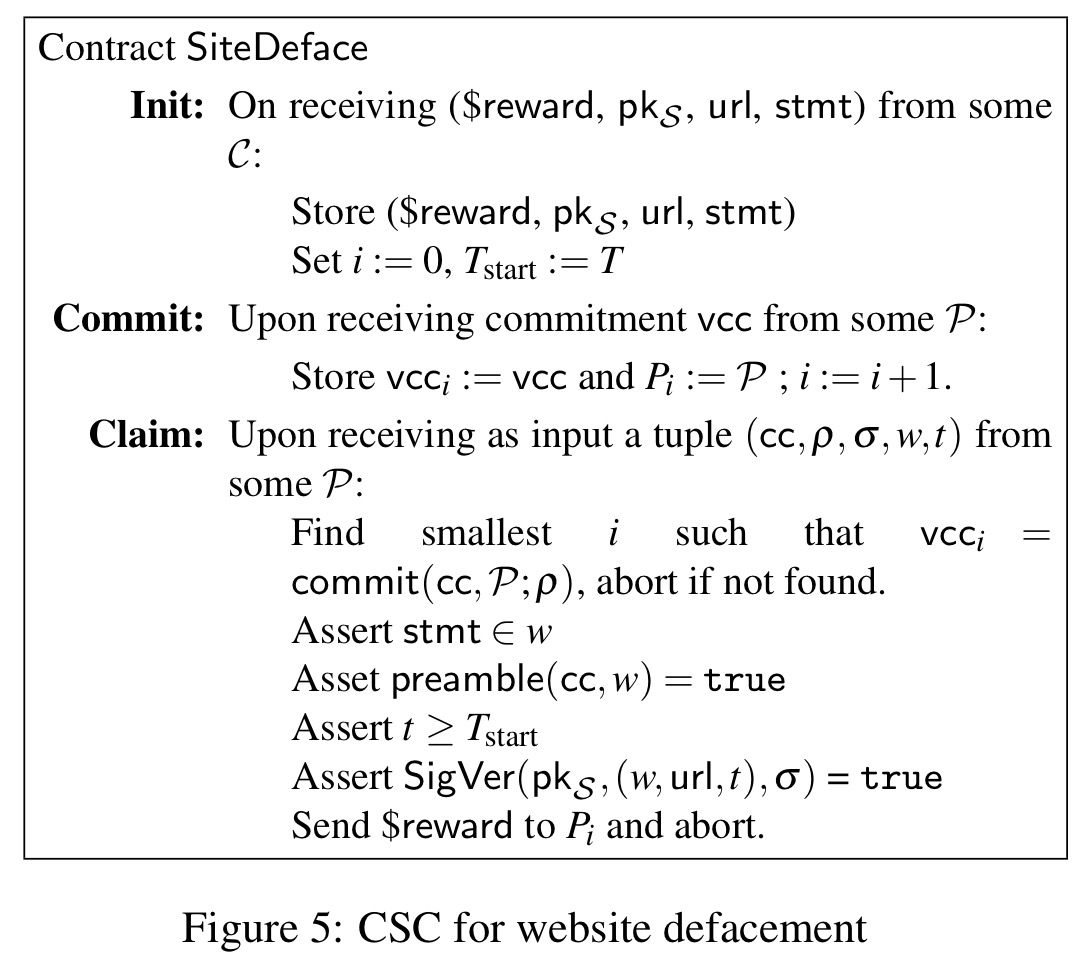 As a proposed counter-measure, the authors suggest making smart contracts trustee neutralizable: an authority, quorum of authorities, or some set of system participants would have the power to remove a contract from the blockchain. This would still preserve anonymity for participants. Whether this would be accepted, I’m really not sure.

We emphasize that smart contracts in distributed cryptocurrencies have numerous promising, legitimate applications and that banning smart contracts would be neither sensible nor, in all likelihood, possible. The urgent open question raised by our work is thus how to create safeguards against the most dangerous abuses of such smart contracts while supporting their many powerful, beneficial applications.