It’s another selection from Martonosi’s 2015 Princeton course on “Great moments in computing” today: Rumelhart’s classic 1986 paper on back-propagation. (Geoff Hinton is also listed among the authors). You’ve almost certainly come across back-propagation before of course, but there’s still a lot of pleasure to be had from reading the paper and seeing again with fresh eyes the birth of the idea. Plus, we get the opportunity to take things nice and slow!

If the input units are directly connected to the output units it is relatively easy to find learning rules that iteratively adjust the relative strengths of the connections so as to progressively reduce the difference between the actual and desired output vectors. Learning becomes more difficult when we introduce hidden units whose actual or desired states are not specified by the task…

Back-propagation is a breakthrough (c. 1986!) algorithm that allows us to build and train neural networks with hidden layers. The learning procedure decides under what circumstances the hidden units should be active in order to achieve the desired input-output behaviour. “This amounts to deciding what these units should represent”. I.e., the hidden units are going to learn to represent some features of the input domain. 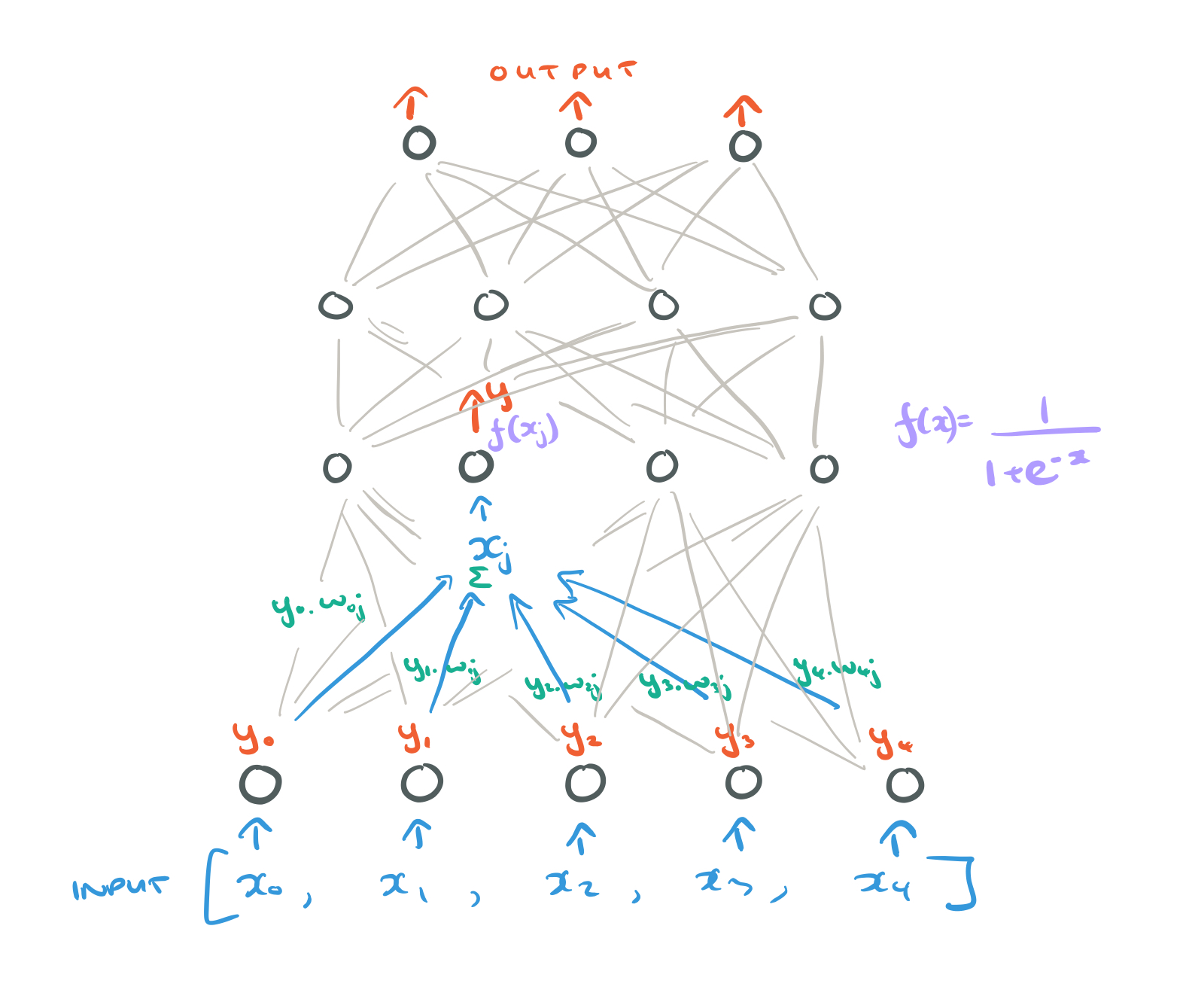 Consider a unit j, with an input

. If the unit is in the input layer, the value

is provided by the input vector. But if the unit is in a higher layer, then its input will be a weighted sum of the outputs of all of the lower layer units that feed into it. For each such unit i that feeds into j, we have an output of that unit,

, adjusted by a weight on the link between i and j,

This produces real-valued output, and is differentiable.

By repeating this procedure, starting with the input layer, we can feed-forward through the network layers and arrive at a set of outputs for the output layer.

We can now compare the calculated outputs to the desired output vector.

The aim is to find a set of weights that ensure that for each input vector the output vector produced by the network is the same as (or sufficiently close to) the desired output vector.

For a given input-output case, the error is given by:

is the computed output value of unit j in the output layer, and

is its desired state. We can get the total error across all training cases by simple summation of the individual case errors.

(Squaring things is handy when we sum, because it makes all differences positive so that positive and negative differences don’t cancel each other out).

We’d like to make the total error as small as possible (minimise it). To do that, we need to adjust the weights (the only parameters we have available to play with). But how should we adjust them to achieve our goal?

To minimize E by gradient descent it is necessary to compute the partial derivative of E with respect to each weight in the network.

We’d like to know how the error changes as we change the weights,

. We don’t know that straight away, but we do know how the error changes as we change the outputs

) as E and y are directly related in the equation for E (EQN 3).

So now we know how the error changes in relation to the outputs y. Recall that

itself is a function of the input

to unit j (EQN 2). So we can also work out how y changes as x changes,

If we denote the sigmoid function by

, and the derivative is:

is itself a function of the weights

and the outputs from lower layers which will be multiplied by those weights (EQN 1). So we can work out how

changes as we change the weights:

. For a given weight

from unit i to unit j the derivative is:

in hand, the simplest form of gradient descent would be to change each weight by an amount proportional to the accumulated gradient:

This method does not converge as rapidly as methods which make use of the second derivatives, but it is much simpler and can be easily implemented by local computations in parallel hardware. It can be significantly improved, without sacrificing the simplicity and locality, by using an acceleration method in which the current gradient is used to modify the velocity of the point point weight space instead of its position:

Where t is incremented by 1 for each sweep through the whole set of input-output cases, and

is an exponential decay factor between 0 and 1 that determines the relative contribution of the current gradient and earlier gradients to the weight change.

Variants on the learning procedure have been discovered independently by David Parker (personal communication) and Yann Le Cun.