How do you find the good configurations though? Just on instance types, Amazon EC2 and Microsoft Azure each offer over 40 (GCP offered 18 at the time of writing, plus the ability to customise VM memory and cores). And that’s before we’ve started to experiment with cluster size… An exhaustive search of the space is clearly way too expensive, especially as each data point requires a run of the job.

CherryPick is a system that leverages Bayesian Optimization to build performance models for various applications, and the models are just accurate enough to distinguish the best or close-to-the-best configuration from the rest with only a few test runs. Our experiments on five analytic applications in AWS EC2 show that CherryPick has a 45-90% chance of finding optimal configurations, otherwise near optimal, saving up to 75% of the search cost compared to existing solutions.

CherryPick’s definition of best by the way, is the lowest cost configuration with a run time less than some specified upper bound. If

is a cloud configuration vector (num instances, instance family type, CPU, RAM, and so on),

is the running time function for a given application and input workload when using that configuration, and

is the price per unit time for the configuration, then we can model the problem as minimising the cost

An approach called Bayesian Optimisation (BO) allows CherryPick to adapt its search scheme based on the current confidence interval of the performance model, and to estimate the best next configuration to try to best distinguish performance across configurations. In Bayesian optimisation the true objective function (

)is unknown, but we can observe it (sample it) at points through experiments. Modelling

according to those samples.

A confidence interval is an area that the curve of the objective function is most likely (e.g., with 95% probability) passing through.

Here’s a worked example. Imagine we have taken two samples at

and computed confidence intervals shown by the blue shaded area below (the dashed line represents the true, unknown, objective function):

We then take a new sample

We can repeat this process until we are satisfied, e.g.:

CherryPick stops when the expected improvement is less than a threshold (e.g. 10%), and at least N (e.g., N = 6) configurations have been observed.

To help further reduce the search space, most of the features in

are normalized and discretized. For example, for disk speed only ‘fast’ and ‘slow’ are defined to distinguish SSDs and magnetic disks.

Modelling the prior function

it is described with a mean function and a covariance function. If two cloud configurations are similar to each other, we expect high covariance, and if they are dissimilar they should have low covariance. The authors chose the  Matérn 5/2 function for this “because it does not require strong smoothness, and is preferred to model practical functions.”

See section 3.6 for details of how CherryPick deals with noise in the underlying cloud platform. In brief, we don’t want to do multiple tests of each configuration due to the expense, so CherryPick models noise via a multiplicative noise factor &eps;, assumed to be less than one. Then it becomes possible to use BO to optimise

and everything works out.

CherryPick uses Expected Improvement (EI) for its acquisition function – picking the point which can maximise the expected improvement over the current best. See eqn (3) in section 3.5 of the paper for the detail, which is based on “an easy-to-compute closed form for the EI acquisition function” from Jones at al., “Efficient global optimization of expensive black box functions.”

The entire CherryPick system is 5000 lines of Python code (not counting the Spearmint BO library it uses). 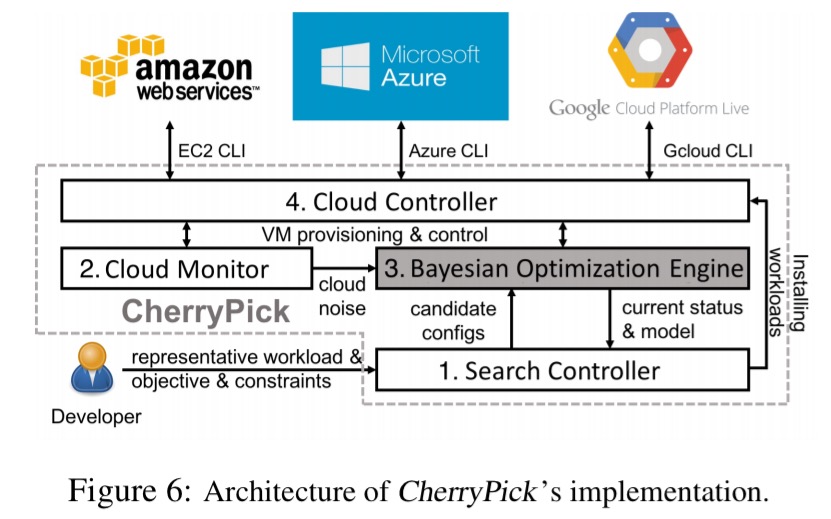 Within each family, large, xlarge and 2xlarge instance sizes are used. Overall 66 different configurations are tested for each family:

The evaluation considers how good the best found configuration is, and how expensive it was to find it. Exhaustive search is used as a comparison, so that we can assess the configuration recommended by CherryPick against the best possible choice. Here are the key findings: 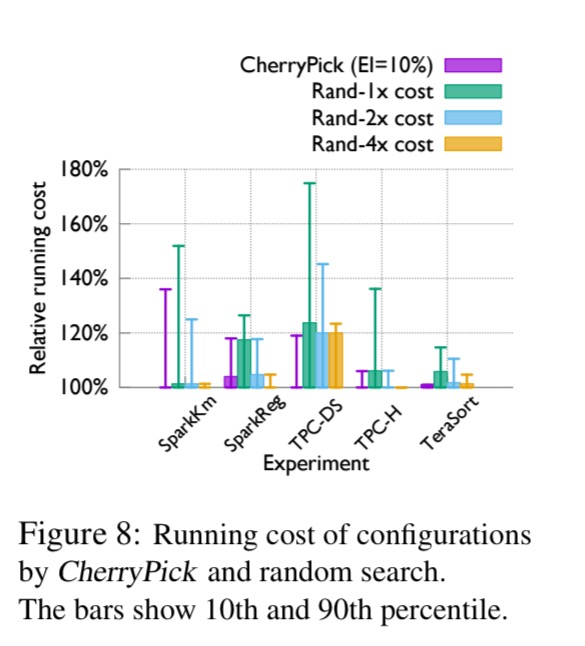 You can see in the following chart how the mean and confidence intervals for the best and worst configurations discovered so far are refined during a sample Bayesian optimisation of the TeraSort workload: 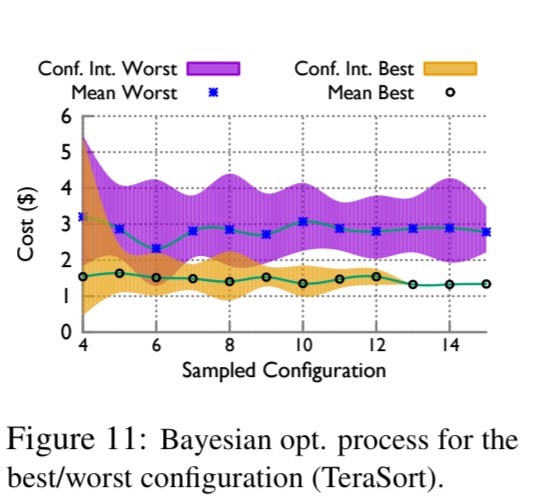 And this illustration shows how CherryPick learns the relation between cloud resources and running time: 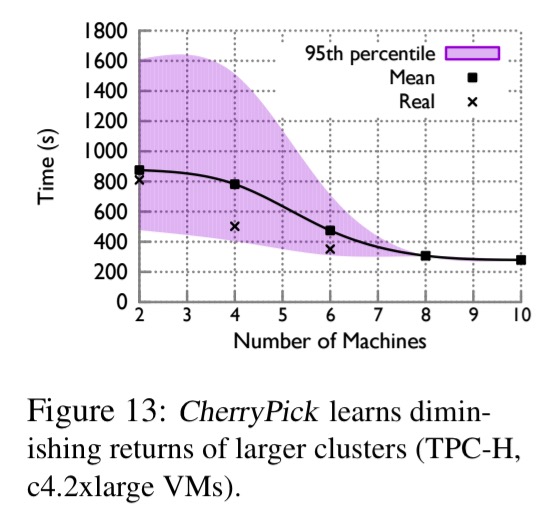 The real curve follows Amdahl’s law: (1) adding more VMs reduces the running time; (2) at some point, adding more machines has diminishing returns due to the sequential portion of the application… CherryPick has smaller confidence intervals for the more promising region where the best configurations (those with more VMs) are located. It does not bother to improve the estimation for configurations with fewer VMs.