It’s OOPSLA in just a few weeks time, and ‘Purposes, concepts, misfits, and a redesign of Git’ will be presented there, bringing the story we looked at yesterday  up to date. The subject matter is the same of course – looking at the extent to which Git’s conceptual model causes confusion in its interface – but the thinking framework around concepts and concept modelling has matured, and the coverage of Git’s model is more comprehensive. There is more validation too – an analysis of 2400 Stack Overflow questions relating to Git (as of July 18th 2016), and a user study with existing Git users.

I have mixed feelings about that study. The tasks that the users were asked to do, and which are documented in Appendix A, are really quite interesting in the way they reveal some of Git’s corner cases (worth a read). But the total user study involved only 11 people, and they each interacted with the tools for one hour.  11 user tests lasting one hour each seems a very small sample indeed for a project that has been running for 3 years now. That’s enough to draw some qualitative conclusions on the version of the tool used at the time, but not enough to produce any quantitative results (‘How many test users in a usability study?‘. I think we can say at this point that the analysis of the difficulties with Git and how they tie back to concepts seems sound. Yet the question we really want answered – does a redesign based around a simpler, cleaner conceptual model produce a tool that is substantially easier to use –  remains open. We have an intuition that it does, and some early results to back that up,  but nothing of statistical significance.

The authors found a significant polarisation of reactions to their work, which group are you in?

In sharing our research with colleagues… we have discovered a significant polarization. Experts, who are deeply familiar with the product, have learned its many intricacies, developed complex, customized workflows, and regularly exploit its most elaborate features, are often defensive and resistant to the suggestion that the design has flaws. In contrast, less intensive users, who have given up on understanding the product, and rely on only a handful of memorised commands, are so frustrated by their experience that an analysis like ours seems to them belabouring the obvious.

Conceptual design is concerned with the selection and shaping of the essential concepts in a system. This is in contrast with representation design which concerns how to embody those concepts in the code.  The authors’ theory of conceptual design has evolved to include a study of motivating purposes and operational principles.

A concept is something you need to understand in order to use an application… and is invented to solve a particular problem which is called the motivating purpose.  A concept is defined by an operational principle, which is a scenario that illustrates how the concept fulfills its motivating purpose. The operational principle is thus a very partial description of the behavior associated with the concept, but focused on the particular aspect of behavior that motivated the introduction of the concept in the first place.

My interpretation: there are a number of goals/tasks the end user has, and the purpose of the system is to support them in achieving those goals. If a concept is necessary to fulfil a given purpose, then that purpose is its motivating purpose – the reason we need the concept. Each concept should be accompanied by a scenario that illustrates how that concept is necessary to fulfil its motivating purpose.

For example, Mac OS has the concept of a trash can. The motivating purpose of the trash can is enabling users to recover deleted files. The operational principle is that any time a file is deleted it is not permanently removed, but instead placed in a special trash folder from which it can be restored until the trash is emptied.

In other words, operational misfits serve to highlight weaknesses in the current conceptual design. You often don’t find them until later in the process. “A good design process, however, should aim to identify misfits as early as possible.”

How do you find misfits early? The authors recommend analysing a design along five dimensions:

Which seems to boil down to: there is a one-to-one mapping between concepts and purposes, and concepts should be orthogonal. I’d like to see a few worked examples to explore e.g. the rule that a purpose cannot motivate more than one concept.

Let’s take a look at these ideas in the context of Git.

We looked at some of these yesterday. See §3 for more details.

Concepts and Purposes in Git

Why do we have version control? The authors identify six top-level purposes:

According to their own rules therefore, we should have exactly six concepts as well.

A good concept should have a compelling purpose: that purpose is what allows users to grasp the concept, and allows developers to focus on designing the concept to fulfill that purpose. In contrast, the conventional view is that the concepts of an application fulfill one or more purposes only in aggregate; there need be no rationale for the design of any single concept except that it plays some role in the larger whole. Our view is that this amorphous relationship between concepts and purposes is what has hindered the kind of design analysis we are attempting here, and that the approach of assigning purposes to concepts not only immediately highlights some discrepancies, but also provides a decomposition that makes deeper analysis possible. In particular, when concepts seem to have no direct mapping to a given purpose, their motivation is questionable, and one might wonder whether they are needed at all

What set of concepts does Git have?

Which we can map to purposes as follows:

The misfits can be explained in terms of that mapping:

As we saw yesterday, Gitless has a smaller number of concepts. I really wish the authors had provided the new purpose -> concept mapping for Gitless, but as it is we’re going to have to try to recover that for ourselves. The purposes remain unchanged of course. The concepts in Gitless are:

The stash and staging area are gone, there are a reduced number of file classifications, the concept of branch is redefined and  the notion of a ‘current branch’ is introduced.  See yesterday’s write-up and the Gitless website for more details.

How do we complete this diagram though? 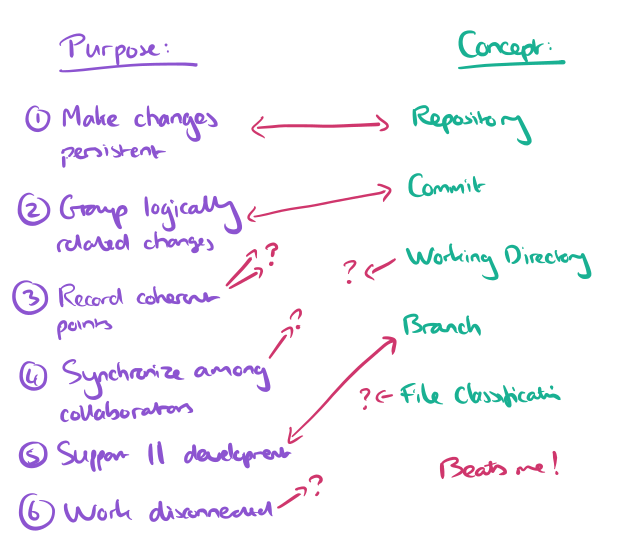 To be honest, I’m not sure. And yet this would seem to be crucial to the authors’ methodology.