We interviewed technical leaders and senior managers in Microsoft Azure regarding the top problems in distributed system development. The consensus was that one of the most critical problems today is how to improve testing coverage so that bugs can be uncovered during testing and not in production. The need for better testing techniques is not specific to Microsoft; other companies such as Amazon and Google, have acknowledged that testing methodologies have to improve to be able to reason about the correctness of increasingly more complex distributed systems that are used in production.

The AWS team used formal methods with TLA+, which was highly effective but falls short of checking the actual executable code. The Microsoft IronFleet team used the Dafny language and program verifier to verify system correctness and compile it to a .NET executable. Deligiannis et al. wanted to find a methodology that validated high-level specifications directly on executable code, and that did not require developers to switch to an unfamiliar language.

Our testing methodology is based on P#, an extension of C# that provides support for modeling, specification, and systematic testing of distributed systems written in the Microsoft .NET framework. To use P# for testing, the programmer has to augment the original system with three artifacts: a model of the nondeterministic execution environment of the system; a test harness that drives the system towards interesting behaviors; and safety or liveness specifications. P# then systematically exercises the test harness and validates program behaviors against the provided specifications.

Here’s an example of a modelled ‘NetworkEngine’ component in P#: 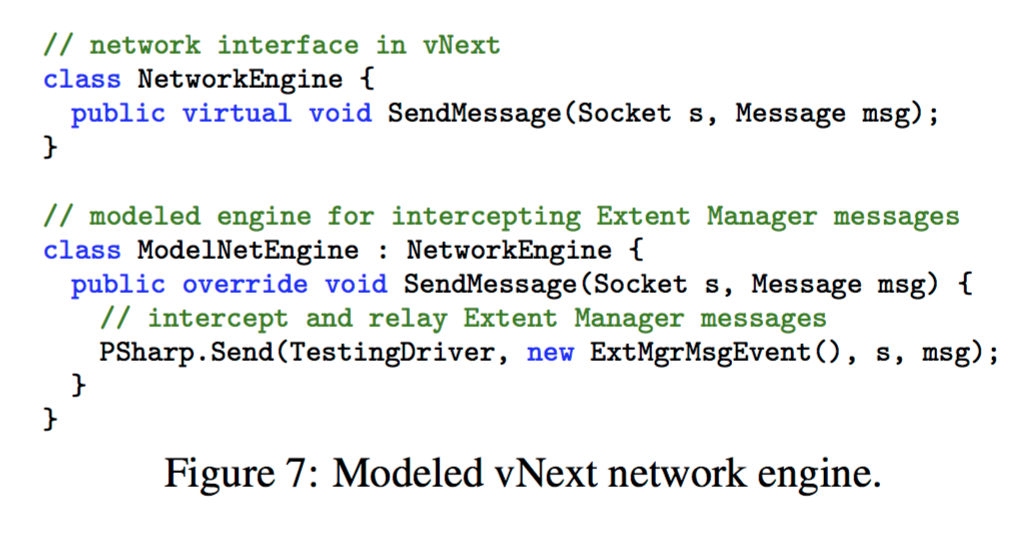 P# supports the usual assertions for specifying safety properties that are local to a P# machine, and also provides a way to specify global assertions by using a safety monitor, a special P# machine that can receive, but not send, events… An erroneous global behavior is flagged via an assertion on the private state of the safety monitor. Thus, a monitor cleanly separates instrumentation state required for a specification (inside the monitor) from program state (outside the monitor).

The user specifies some upper-bound on execution time, and if the monitor is in a hot state when bounded execution terminates, a liveness violation is triggered. 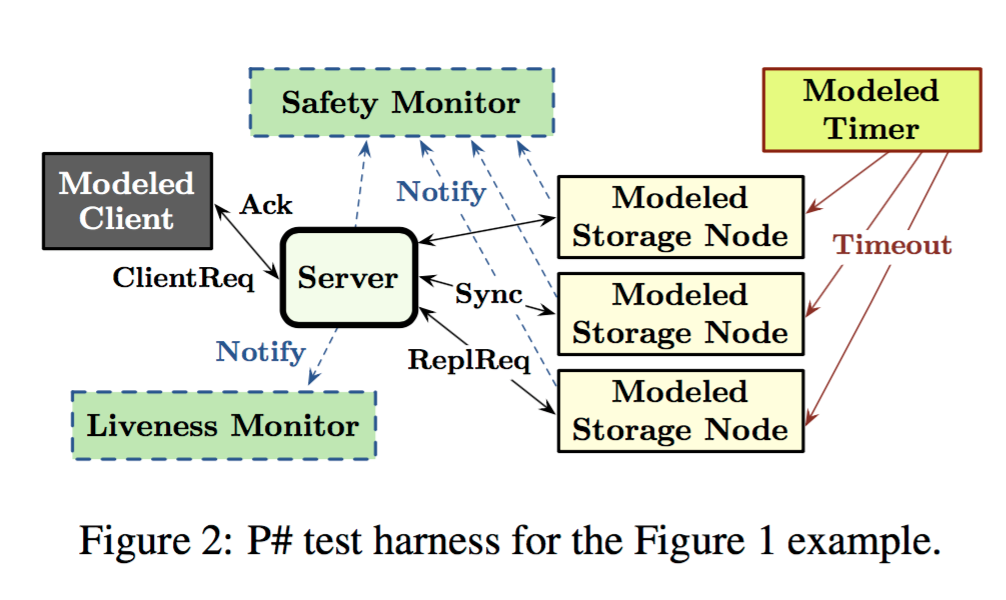 The test harness itself is also written by the developer in P#. It’s goal is to drive the system towards interesting behaviours by non-deterministically triggering various events.

Here’s a snippet of a testing driver for Microsoft Azure Storage, vNext: 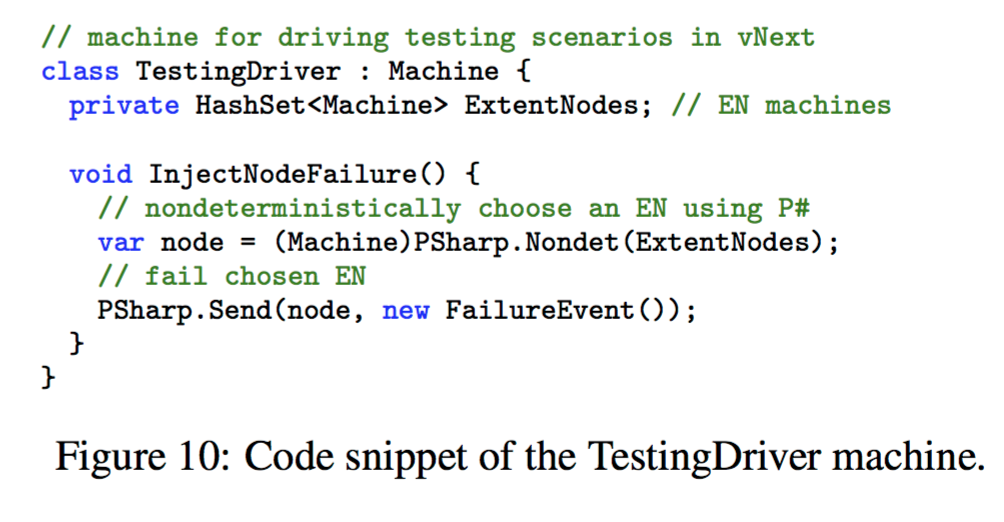 With all these pieces in place…

… The P# testing engine will serialize (in a single-box) the system, and repeatedly execute it from start to completion, each time exploring a potentially different set of nondeterministic choices, until it either reaches the user-supplied bound, or it hits a safety or liveness property violation. This testing process is fully automatic and has no false-positives. After a bug is discovered, P# generates a trace that represents the buggy schedule, which can then be replayed to reproduce the bug. In contrast to logs typically generated during production, the P# trace provides a global order of all communication events, and thus is easier to debug.

By intercepting all network messages and dispatching them through P#, P# is able to systematically explore the interleavings between asynchronous event handlers in the system. Modelled components can also make use of P#’s support for controlled non-determinstic choices – for example, by choosing to drop messages in a non-deterministic fashion if emulating message loss is desirable.

This leaves me with two key questions: what about the state-space explosion – i.e. how can the system effectively cover all of the possible combinations?; and what about minimising a schedule down to just that needed to reproduce the bug? I note in the evaluation that four known bugs were not caught by the test harness in the allowed 100,000 executions. “We believe this is because the inputs and schedules that trigger them are too rare in the used distribution.” (See Lineage Driven Fault Injection for another way of approaching this problem).

The authors claim the state-space problem is somewhat mitigated by the use of modelled components. They don’t say anything in this paper about failing test minimisation.

… these bugs were hard to find with traditional testing techniques, but P# managed to uncover and reproduce them in a small setting.

Table 2, reproduced below, summarises the bugs that were found (using a random scheduler, and a randomized-priority scheduler – both variations on randomly choosing which P# machine to execute next at each scheduling point), and the time taken to find them. 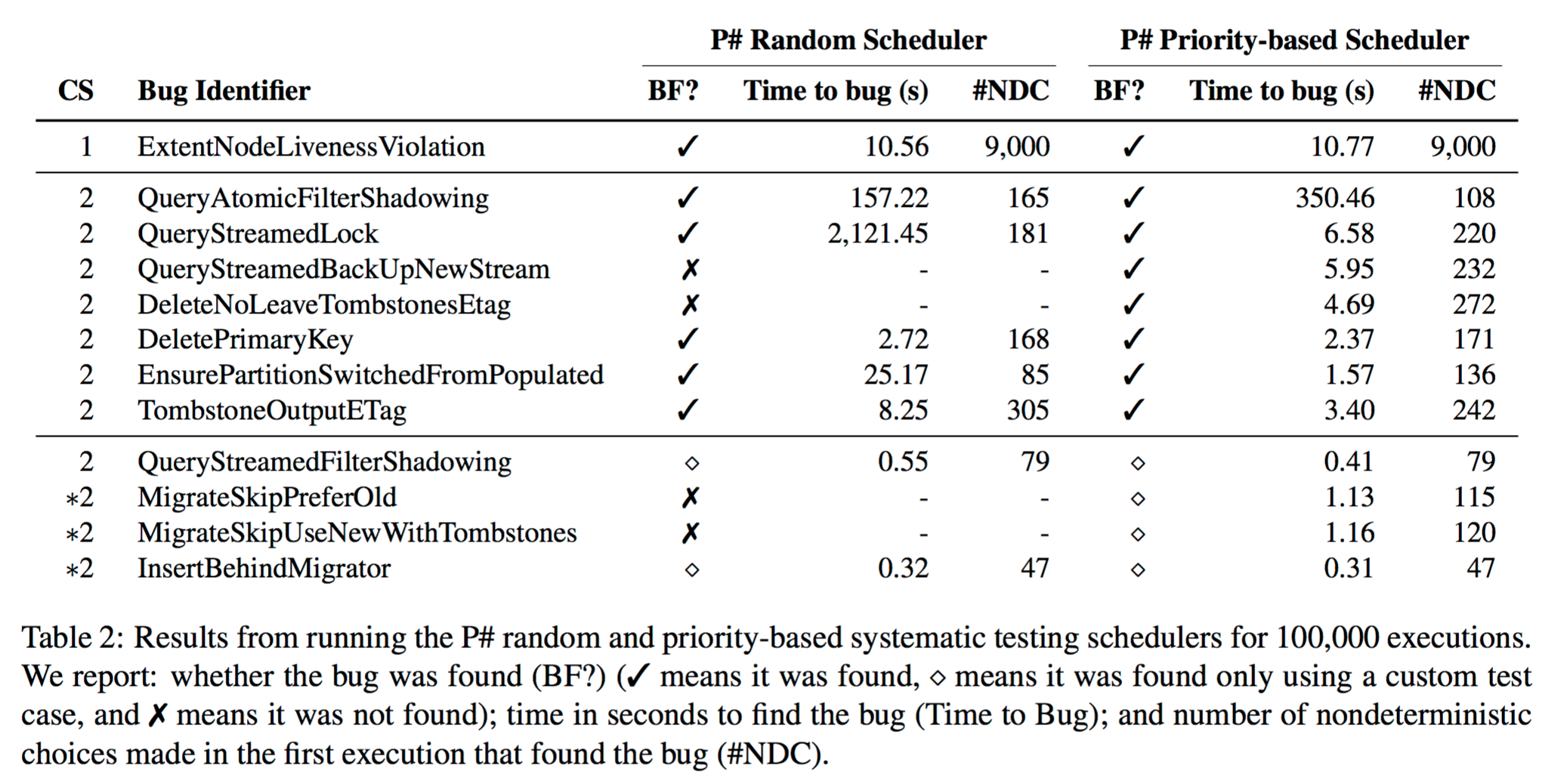 Despite the extensive [traditional] testing efforts, the vNext developers were plagued for months by an elusive bug in the ExtMgr logic. All the unit test suites and integration test suites successfully passed on each test run. However, the stress test suite failed from time to time after very long executions; in these cases, certain replicas of some extents failed without subsequently being repaired… It took less than ten seconds for the P# testing engine to report the first occurence of a liveness bug in vNext. Upon examining the debug trace, the developers of vNext were quickly able to confirm the bug.

“In principle, our methodology is not specific to P# and the .NET framework, and can be used in combination with any other programming framework that has equivalent capabilities.”