It’s hard to imagine something more damaging to Apache Storm than this. Having read it through, I’m left with the impression that the paper might as well have been titled “Why Storm Sucks”, which coming from Twitter themselves is quite a statement. There’s a good write-up of the history of Apache Storm on Nathan Marz’s blog – Nathan left Twitter in 2013. This paper marks the beginning of a new chapter in that history.

At Twitter, Storm has been decommissioned and Heron is now the de-facto streaming system. It has been in production for several months and runs hundreds of development and production topologies in multiple data centers. These topologies process several tens of terabytes of data, generating billions of output tuples…. results from an empirical evaluation of Heron demonstrate large reductions in CPU resources when using Heron, while delivering 6-14X improvements in throughput, and 5-10X reductions in tuple latencies.

Heron still supports the Storm API, but after evaluating their options Twitter decided that Storm was too badly broken for their needs to be fixed within the existing codebase.

Since the issues discussed … are fundamental to Storm, fixing them in Storm would have required extensive rewrite of the core components. […] Thus, we concluded that our best option was to rewrite the system from ground-up, reusing and building on some of the existing components within Twitter.

Guess you’d better take that Twitter logo off of the Apache Storm home page then Apache :(.

So what was up with Storm then?

…many limitations of Storm have become apparent. We need a system that scales better, has better debug-ability, has better performance, and is easier to manage – all while working in a shared cluster infrastructure.

Let us count the ways…

For our needs at Twitter, we needed a stream processing platform that was open-source, high-performance, scalable, and was compatible with the current Storm API. We also needed the platform to work on a shared infrastructure.

Heron is a container-based implementation. Heron topologies are deployed to an Aurora scheduler (which runs on top of Mesos), but they could equally be deployed on YARN or Amazon ECS (Elastic Container Service).

This design is a departure from Storm, where Nimbus (which is an integral component of Storm) was used for scheduling. Since Twitter’s homegrown Aurora scheduler and other open-source schedulers (e.g. YARN) have become sophisticated, we made the conscious choice of working with these schedulers rather than implementing another one.

Of note is that Heron runs multiple processes per container. 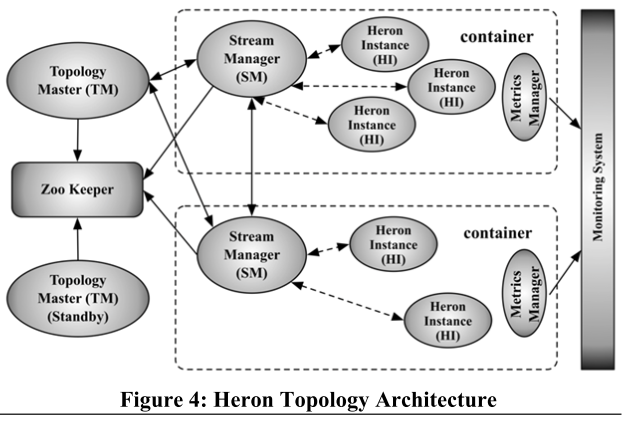 The first container runs a process called the Topology Master. The remaining containers each run a Stream Manager, a Metrics Manager, and a number of processes called Heron Instances (which are spouts/bolts that run user logic code). Multiple containers can be launched on a single physical node. These containers are allocated and scheduled by Aurora based on the resource availability across the nodes in the cluster. (At Twitter, Aurora maps these containers to Linux cgroups.) A standby Topology Master can be run for availability. The metadata for the topology (which includes information about the user who launched the job, the time of launch, and the execution details) are kept in Zookeeper.

Heron uses spout backpressure, in which Stream Managers clamp down on local spouts to reduce the new data that is injected into the topology.

Backpressure is triggered when the buffer size reaches the high water mark, and remains in effect until the buffer size goes below the low water mark. The rationale for this design is to prevent a topology from rapidly oscillating between going into and coming out of the backpressure mitigation mode.

Heron Instances do the main work for a bolt or spout. Each is a JVM process and runs only a single task. Heron Instances have two threads, a gateway thread and a task execution thread.

The Gateway thread is responsible for controlling all the communication and data movement in and out from the HI. It maintains TCP connections to the local SM and the metrics manager. It is also responsible for receiving incoming tuples from the local SM. These tuples are sent to the Task Execution thread for processing.

How is Heron better than Storm? Let us count the ways…

In the evaluation in section 7 of the paper, Heron beats Storm in every single metric.