Two phase commit (2PC) is the protocol used to coordinate distributed transactions. In this paper Lampson and Lomet first recap the basic 2PC protocol in its ‘presumed nothing’ form, then go on to describe the traditional ‘presumed abort’ and ‘presumed commit’ optimizations. Then finally they introduce a new presumed commit protocol that has lower message and log write costs. The secret involves a trade-off (keeping a small amount of state around potentially forever) in return for reduced logging. As you will see in the analysis, the amount of state is tiny and the trade-off looks to be a good one.

In all of the variants we will discuss, there is a coordinator driving the transaction to an agreed outcome, and a number of cohorts (resource managers) that all need to agree on whether to commit or to abort. Of course the tricky bit is that anything can fail at any time…

The basic presumed nothing protocol 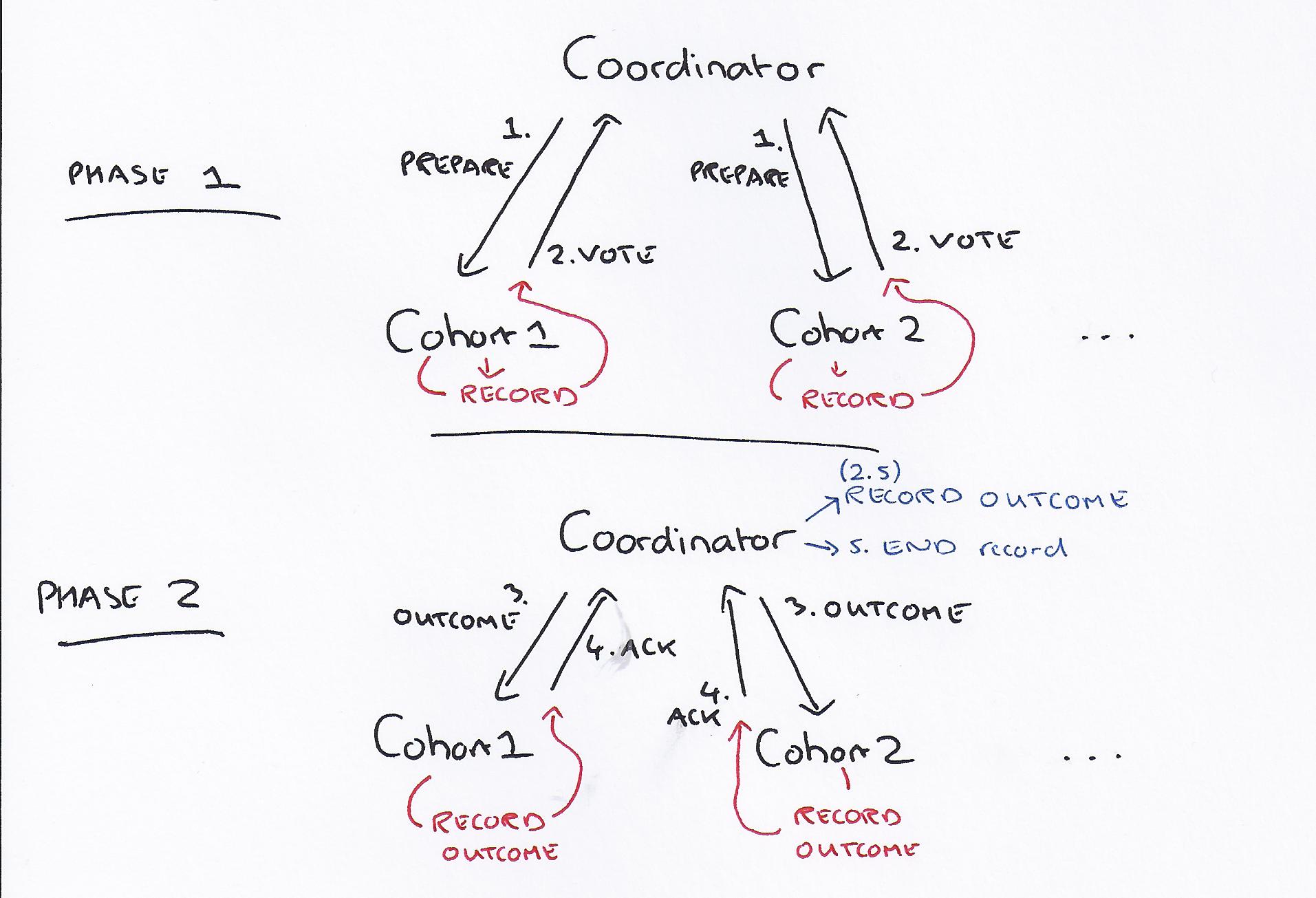 In phase 1:
* The coordinator sends a PREPARE message to all cohorts
* Each cohort may respond with an ABORT-VOTE, or stably record everything needed to later commit the transaction and respond with a COMMIT-VOTE

The coordinator records the outcome in its log (COMMIT iff all cohorts voted to COMMIT, ABORT otherwise).

In phase 2:
* The coordinator sends an outcome message (COMMIT-VOTE or ABORT-VOTE) to all cohorts
* The cohort writes the transaction outcome to its log (after this, it never needs to ask the coordinator for the outcome again if it crashes), and replies with an ACK message.

The coordinator writes an END message to its log, which tells it not to reconstruct in-memory information about the transaction on recovering after a crash.

Cost of the presumed nothing protocol:

Once a transaction has aborted, its entry is deleted from the coordinators in-memory database, since a missing entry will be presumed to have aborted. No information needs to be logged about such transactions because there will never be any need to recovery an in-memory state for them.

In summary, PrA aborts a transaction more cheaply than PrN, and it commits one in exactly the same way.

Presumed commit is kind of the opposite. Instead of assuming that a missing transaction is aborted, we assume it has committed.

If a cohort is read-only it doesn’t need to do any logging and doesn’t care about the transaction outcome, it can send a READ-ONLY-VOTE, release its locks, and forget the transaction.

If all cohorts send a read-only vote then the coordinator doesn’t send an outcome message, and it can freely choose whatever outcome causes the least logging.

It is the coordinator logging that makes PrA preferable to PrC. To commit a transaction, a PrC coordinator forces two log records, while PrA forces only one record; its other log write is not forced. The extra forced write is for PrC’s transaction initiation record, and it is needed for every transaction.

But the PrC protocol has an advantage in message costs, therefore if the forced initiation record logging could be avoided, it would be better a option than PrA.

If we assume monotonically increasing transaction ids, we can bound the “Initiated Set” to transactions with ids in some interval. Every transaction in this set has an abort outcome by presumption on recovery. To find the upper bound, we can either take the highest transaction id on the log and add some delta to it (an example is given of 100 tx ids), or we can read its value explicitly from the log. (Which requires periodically writing candidate upper bound tx ids to the log).

The lower bound is written to the log so that we know it after a crash.

We ensure that tidl (the lower bound) is known after a crash by writing it to the log. We can advance tidl whenever that transaction terminates, i.e., either commits or aborts. When this happens we write to the log the new value for tidl along with the commit or abort record that we are writing anyway. Thus it is recorded without extra log writes or forces.

After a crash, transaction ids greater than the lower bound are presumed to have aborted. Transaction ids for transactions initiated after recovery start from the upper bound. The “Initiated Set” at the time of a crash may need to be stored indefinitely.

Even assuming that the system crashes once a day (which is high for a well managed system), and the system is in operation seven days a week, it would take 2000 days or six years to accumulate one megabyte of crash related IN information. The current purchase price (1993) of a megabyte of disk space is two dollars.

We have traded the ongoing logging necessary to permit us to always garbage collect our protocol database entries after a coordinator crash for the cost of storing forever a small amount of information about each crash. This appears to be a good trade.