CRDTs are a great example of consistency as logical monotonicity. They come in two main variations:

State-based CRDTs look attractive therefore, but over time as the state grows sending the full state every time quickly becomes expensive. That’s where Delta-based CRDTs come in. These send only the delta to the state needed to reconstruct the full state.

), typically much smaller than the full state of the replica, to be merged with the local state. The same

is also added to an outbound

buffer, to be periodically propagated to remote replicas. Delta-based CRDTs have been adopted in industry as part of the Akka Distributed Data framework and IPFS.

So far so good, but the analysis in this paper reveals an unexpected issue: when updates are frequent enough that concurrent update operations are occurring between synchronisation points, delta-propagation algorithms perform no-better than sending the full state.

You can see the effect in the following chart: delta-based propagation is transmitting pretty much the same amount of data as full state-based. 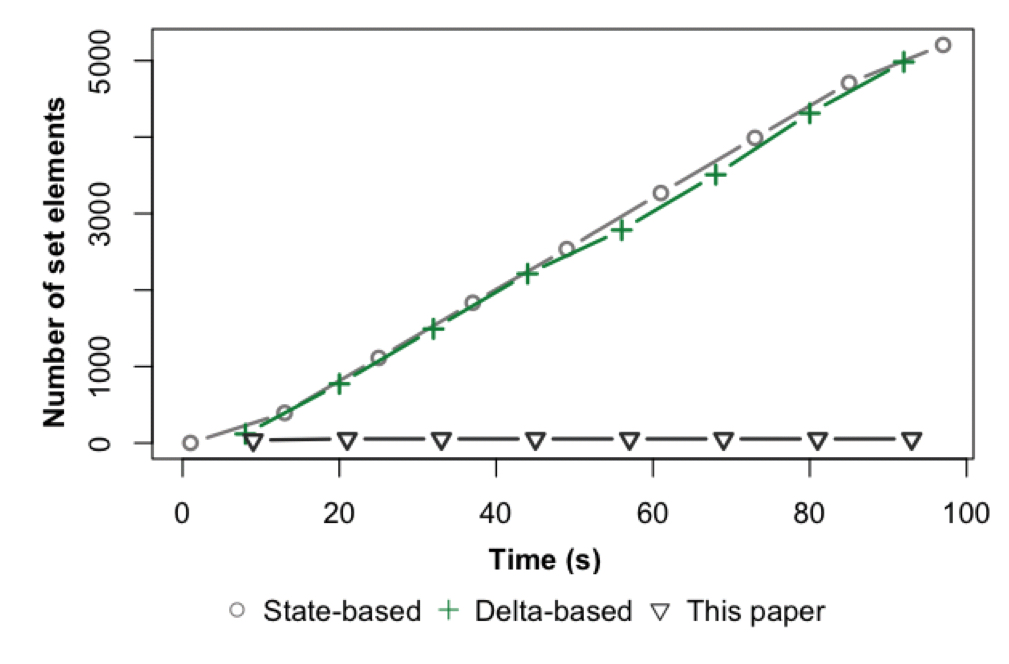 Moreover, due to the overheads of computing deltas etc., delta-propagation is also consuming a lot more CPU to do so. 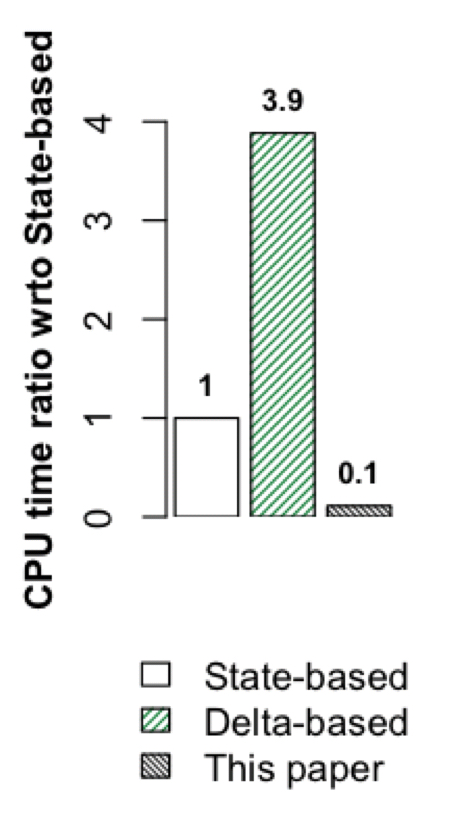 I’m sure you’ve also spotted in those two figures the additional data series for ‘this paper.’ Two key enhancements to the delta-propagation algorithm are introduced which greatly reduce both the amount of data transmitted and the CPU (and memory) overheads.

To bring all this to life we need a couple of examples. The paper uses grow-only CRDT counters and grow-only sets. State-based CRDTs are based upon a join semi-lattice,

, a set of mutators that update that state, and a binary join operator

that derives the least upper bound for any two elements of 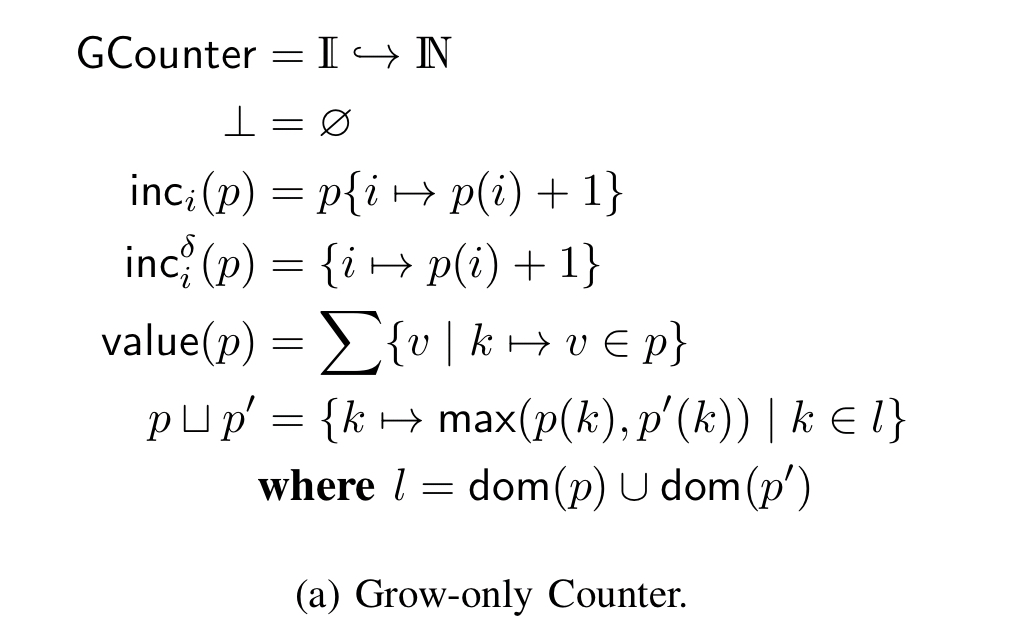 For a grow-only set (GSet) we just add elements to the set and the join operator is a set union. 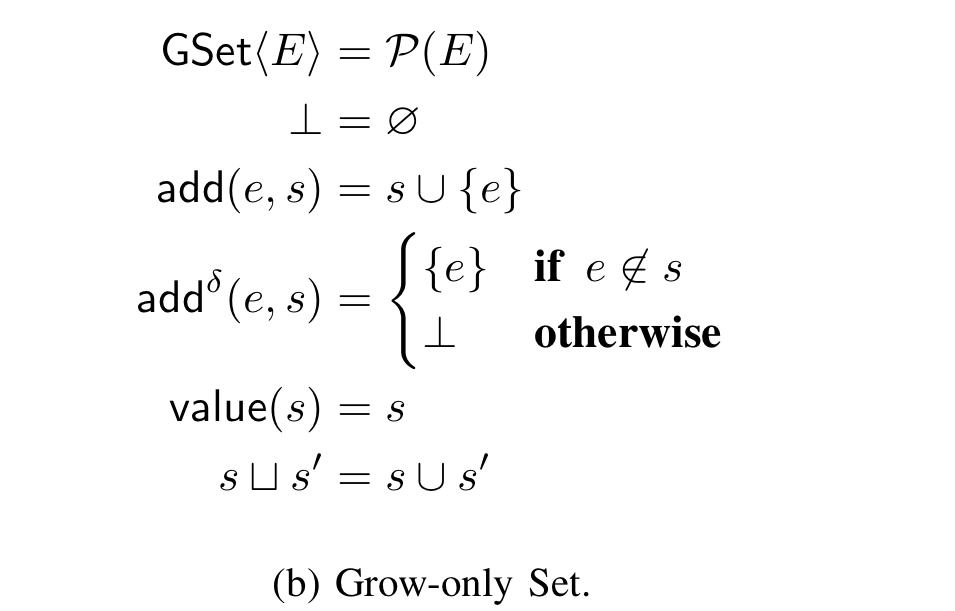 Hasse diagrams can be used to show the evolution of the lattice. For example: 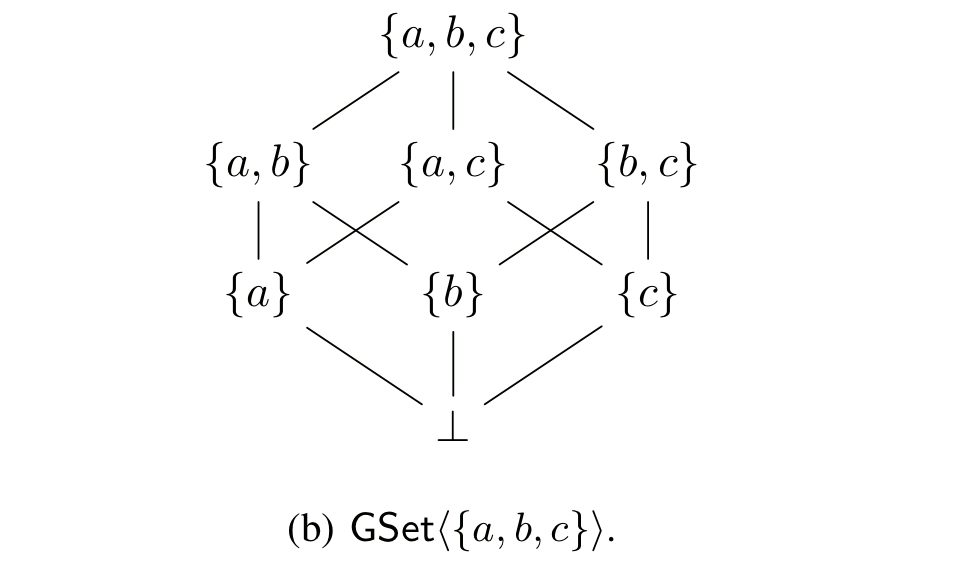 Let’s look at one particular evolution of a GSet in a scenario with two replicas, A and B. In the diagram below,

marks a point in time where synchronisation occurs. For example, at

, replica B sends the delta

to replica A. A has also received a local update. At

, replica A sends all updates it has received since the last time it propagated changes back to B. This is the set

. Meanwhile replica B has added

it sends all of its changes since

It’s easy to spot some redundancy in transmission here. At

in the update it sends back to _A_ again. All of the underlined elements in the figure above are redundant transmissions of this type.

So it’s not exactly rocket science…

> … by simply tracking the origin of each

-buffer, replicas can avoid back-propagation of

The BP optimisation in effect says “don’t send an update back to the replica that told you about it in the first place!” In order to do that, we’ll need some extra book-keeping to remember where updates have come from. The evaluation shows this is worth it.

Here’s another example trace that shows a related issue:

Here we see that at

to D. Then C receives an update

is propagated from C to D, with the result that C has redundantly sent

to D in this second transmission. The RR optimisation removes this redundant transfer, we should…

-groups (RR) before adding them to the delta buffer.

And that’s it! Don’t send an update back to the replica that sent it to you, and don’t send the same update to the same replica more than once.

is join irreducible, but the set

is not because we can construct it by joining

. Every CRDT has a unique irredundant decomposition of a state into a set of join irreducible states. For the GSet for example, these are just the sets containing individual elements, and for the GCounter they are the individual replica-local counters. We can use this decomposition to find the minimum delta,

, updated to include the BP and RR optimisations. Highlighted lines show the changes. 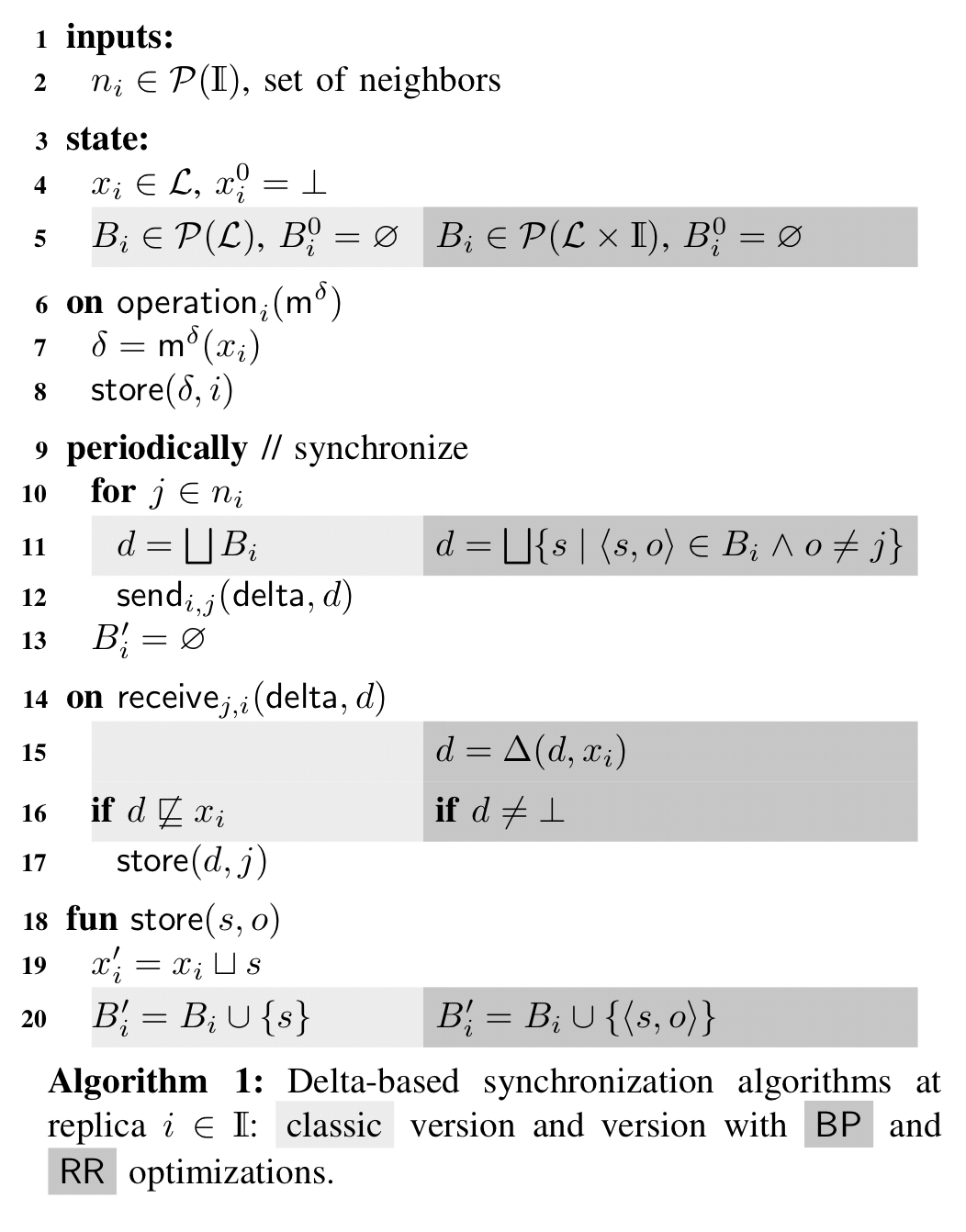 -buffer is tagged with its origin at line 5, so that we can filter out redundant deltas when sending updates in line 11. For RR we extract the minimal delta in line 15.

The evaluation takes place over two different network topologies. Both have 15 nodes, but one is cyclic (mesh) and one is acyclic (tree).

Each node performs an update and synchronises with its neighbours once per second, as per the table below. 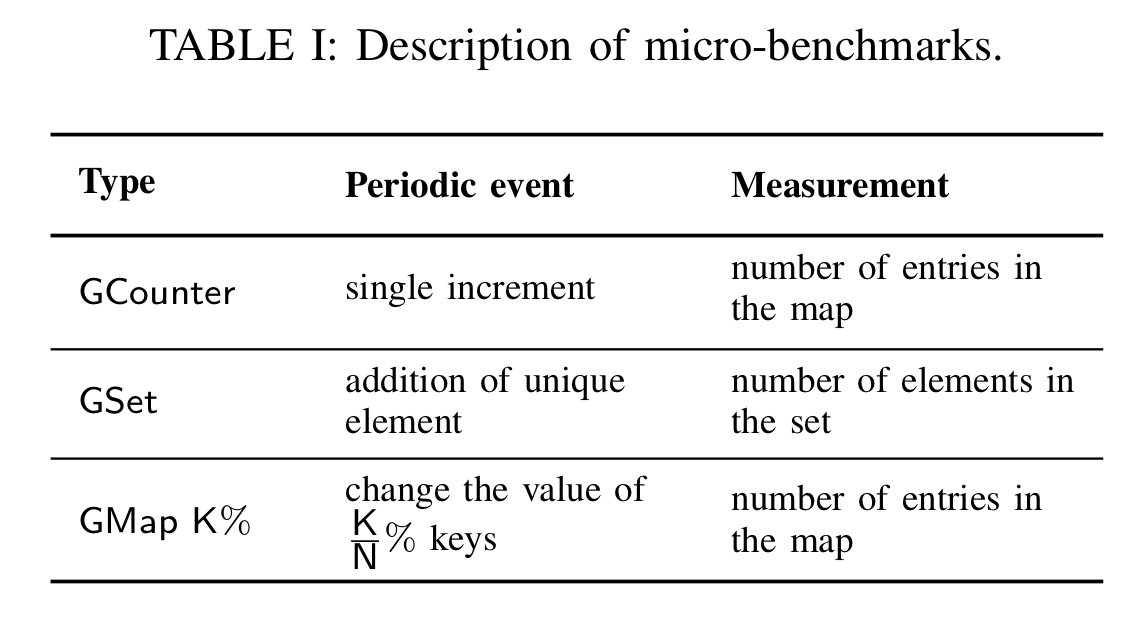 Here’s an analysis of the amount of data transmitted by GSet and GCounter in the tree and mesh topologies.

In the tree topology, BP alone is enough to give good results, whereas the mesh topology benefits from RR.

Compared to Scuttlebut and operation-based CRDTs, delta-based CRDTs with both BP and RR have a much lower metadata overhead. The overhead can be as high as 75% with the former group, whereas the optimised delta-based algorithm can get this as low as 7.7%. 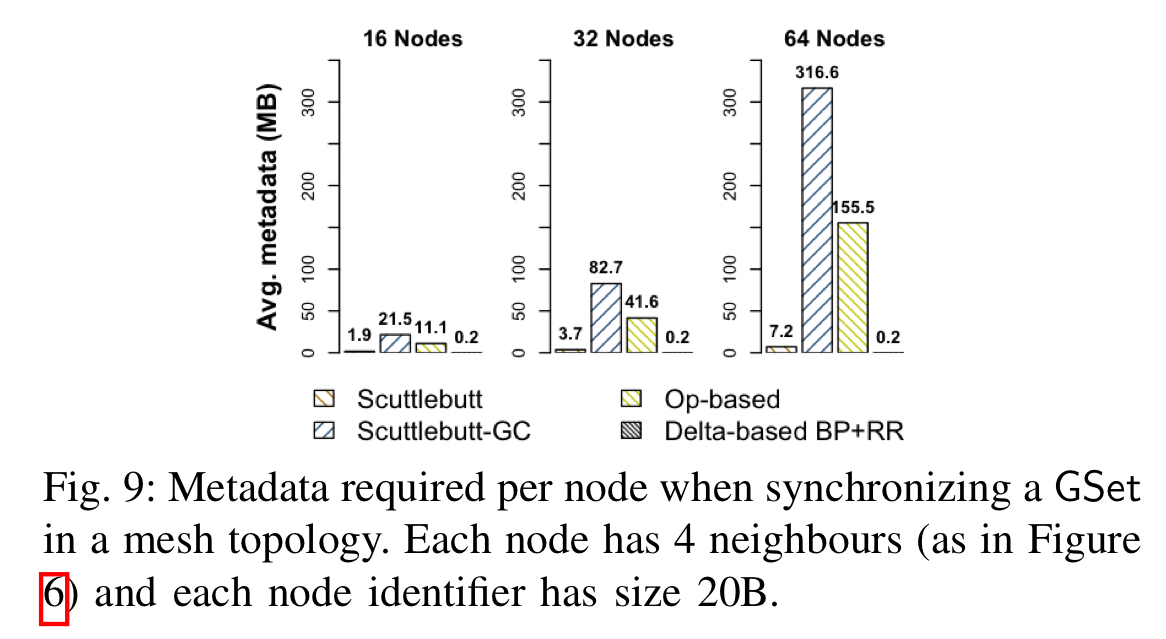 When used in the Retwis twitter clone for a moderate-to-high contention workload, the BP + RR optimisations can reduce CPU overhead by up to 7.9x compared to the classic delta-based algorithm.

State-based CRDT solutions quickly become prohibitive in practice, if there is no support for treatment of small incremental state deltas. In this paper we advance the foundation of state-based CRDTs by introducing minimal deltas that precisely track state changes.