Sometimes the perfect is the enemy of the good. When we’re talking about securing smart contracts, we need all the help we can get! Bugs can cost millions of dollars. Securify uses a set of expert heuristics (patterns) to help identify issues in smart contracts. It’s available at https://securify.ch, has analysed over 18K uploaded contracts, and is used by security auditors as part of their arsenal.

The increased adoption of smart contracts demands strong security guarantees. Unfortunately, it is challenging to create smart contracts that are free of security bugs. As a consequence, critical vulnerabilities in smart contracts are discovered and exploited every few months. In turn, these exploits have led to losses reaching millions worth of USD in the past few years…. Despite their potential, repeated security concerns have shaken the trust in handling billions of USD by smart contracts.

Too right! We’ve examined some of the challenges involved in creating correct smart contracts in previous editions of The Morning Paper, as well as tools such as Zeus that help with verification.

It’s not a solvable problem in the general case (i.e., ‘perfect’ doesn’t exist):

The main challenge in creating an effective security analyzer for smart contracts is the Turing-completeness of the programming language, which renders automated verification of arbitrary properties undecidable.

That doesn’t mean we can’t build tools that are helpful though. Securify’s approach to the problem is to identify a set of patterns in contract data-flow graphs, expressed as rules in Datalog, that can verify either compliance with a desired security property, or violation. In addition to a catalog of out-of-the-box patterns, users of Security can also express their own contract-specific rules.

A key benefit in working with patterns, instead of their corresponding property, is that patterns are substantially more amenable to automated reasoning.

Securify starts with EVM bytecode (or Solidity contracts which are then compiled to bytecode). It translates the bytecode into a set of Datalog facts (asserting instructions executed, and ‘follow’ relationships between instructions). A set of patterns expressed as Datalog rules are then evaluated, and matches are compiled into a report. 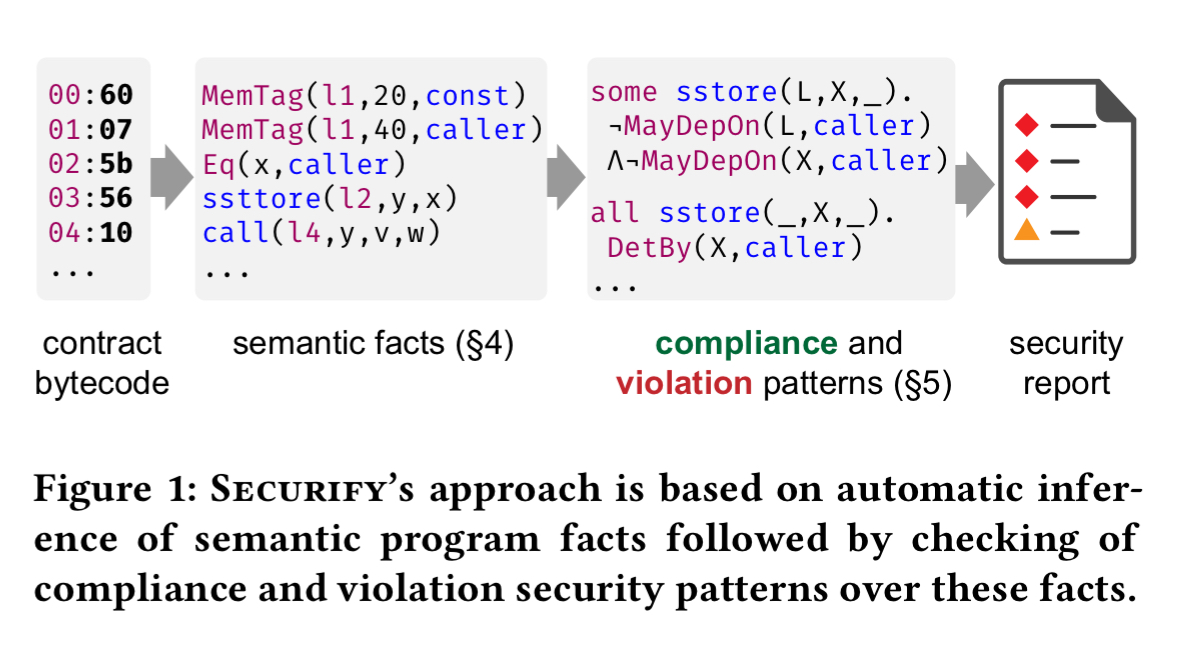 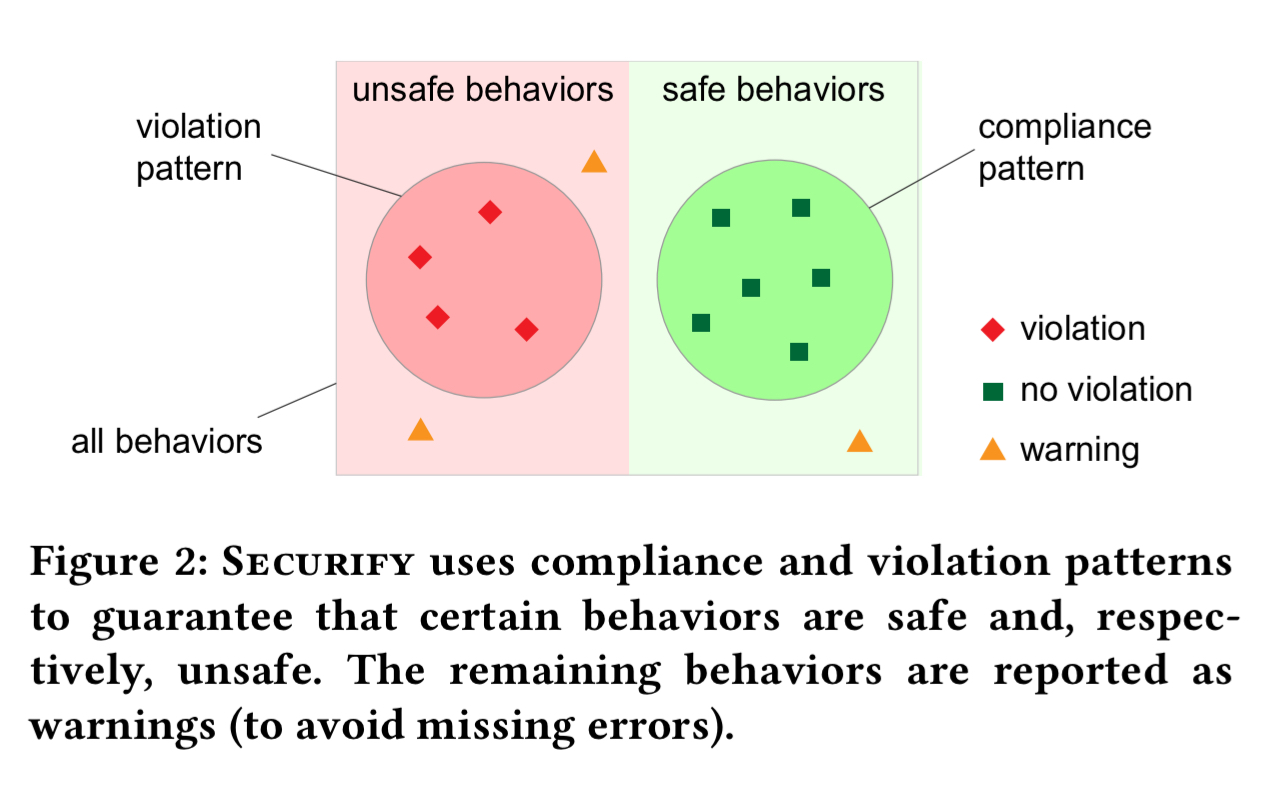 EVM bytecode is first transformed into static-single assignment (SSA) form, as is standard for code analysis. Many opcodes (such as push, dump etc.) are eliminated during this translation to a stackless representation.

For the instructions that are left, Securify infers a set of base facts of the form

is the instruction name,

is the instruction label,

are the arguments. In addition, Securify adds a follow fact,

to indicate that the instruction with label

. The joining of then/else branches is captured by a

Given these base facts, we now add some flow-dependency and data-dependency predicates. 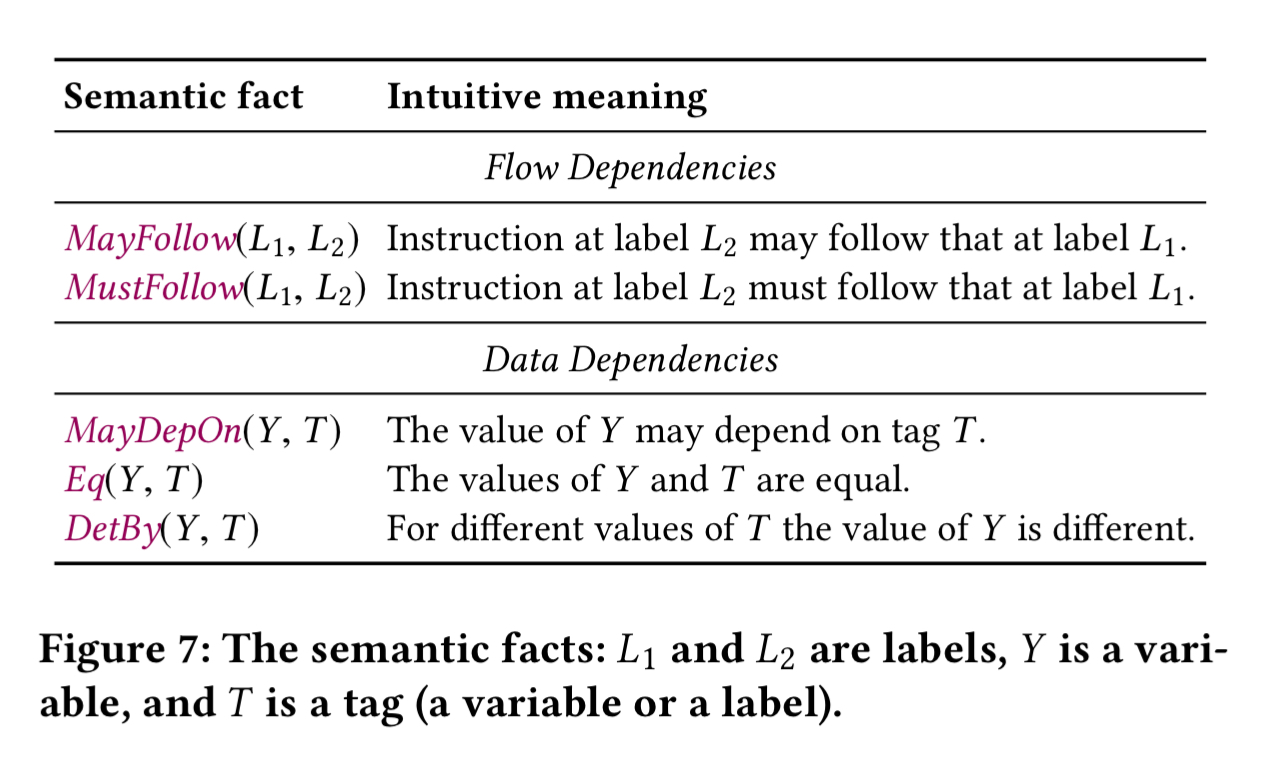 MayFollow and MustFollow track transitive follow relationships across multiple instructions. MayDepOn tracks whether the derived value of a variable depends on a given tag (contract variable or instruction). MemTag and StorageTag assign tags to variables in memory or storage. Taint propagates tags on branches: 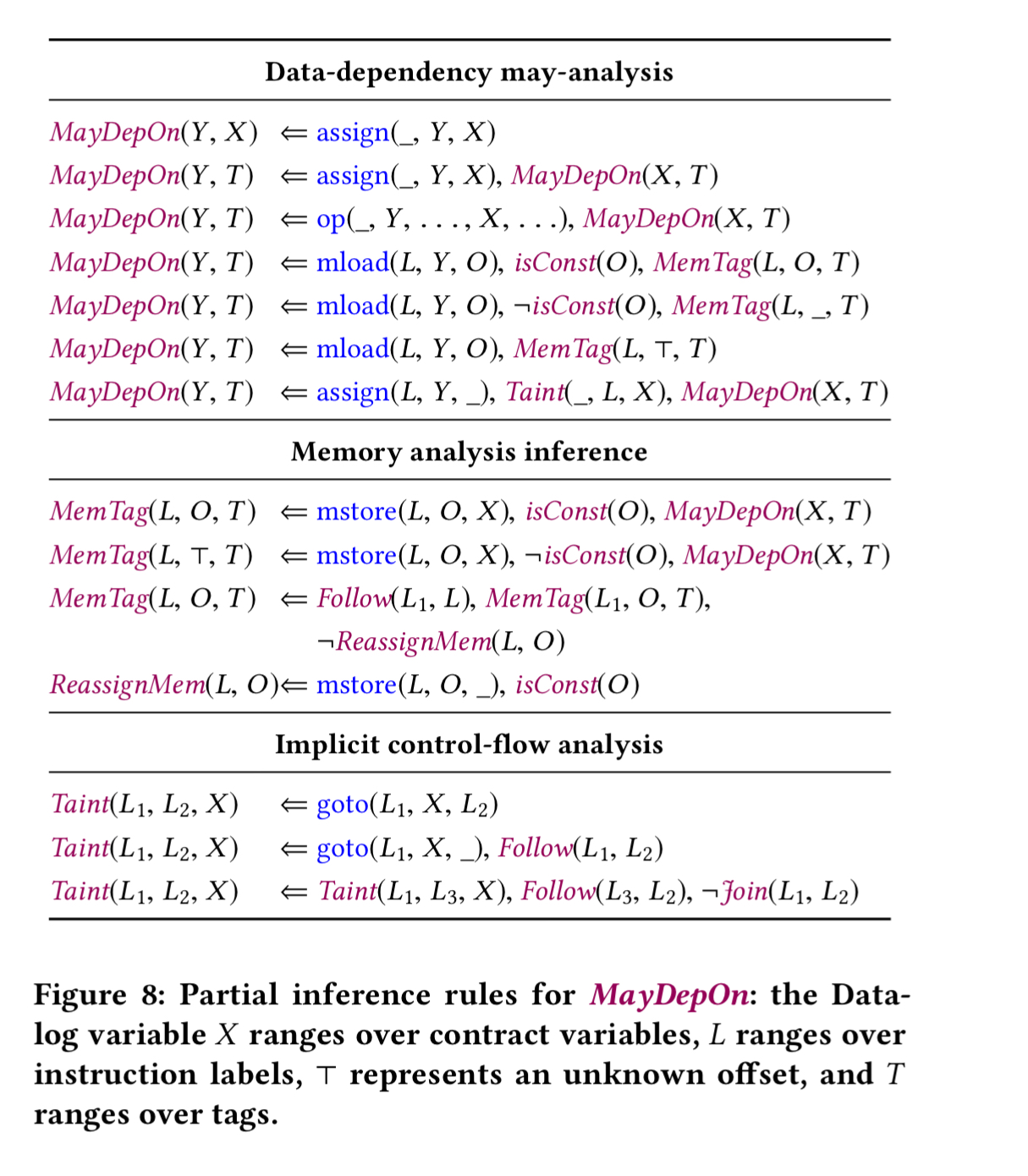 Given the set of facts inferred from the bytecode, we can now write predicate to capture patterns of interest. In condensed form, the grammar of Security rules looks like this:

It’s easier to see the concrete examples of pattern predicates for the seven properties built into Securify though: 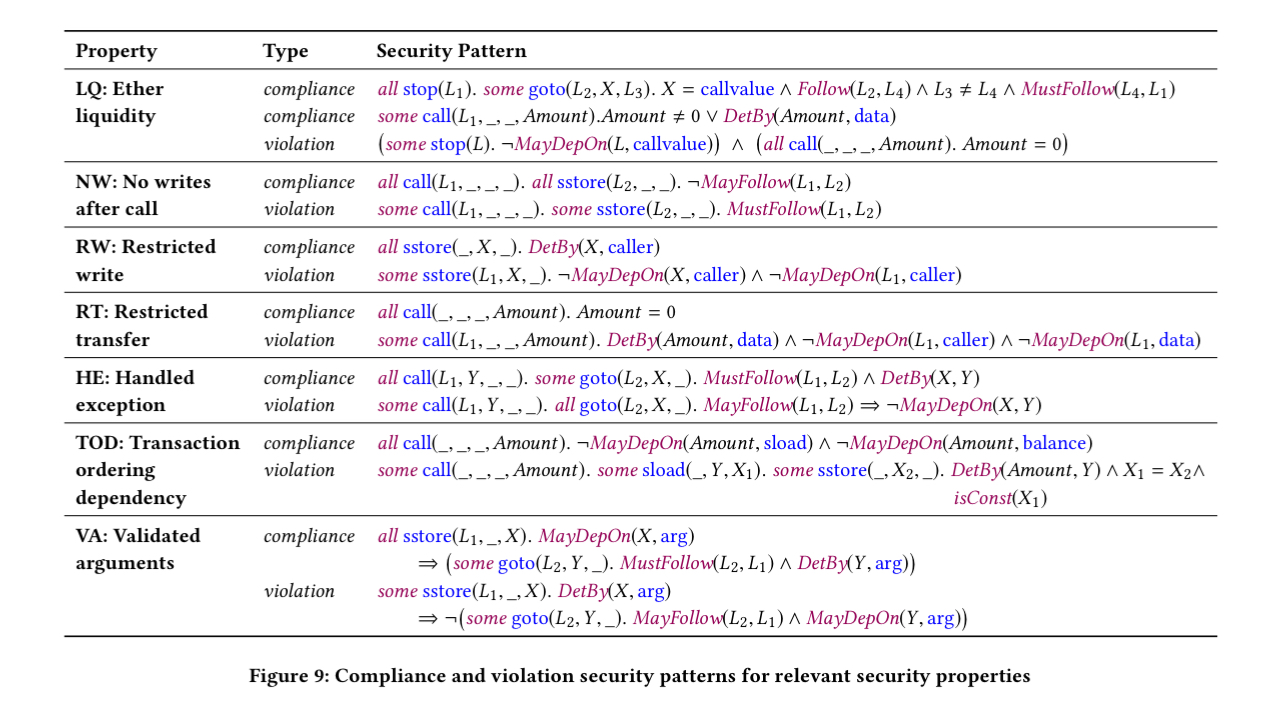 Let’s take a brief look at each of the seven properties.

In addition, auditors can (and commonly will) write contract-specific patterns to be checked by Security as well.

The implementation of Security is built on top of the Soufflé Datalog solver.

Securify is evaluated on 24,594 smart contracts created using the parity client, and the first 100 Solidity contracts uploaded to the online Securify contract checker in 2018.

For the real-world deployed smart contracts, the following chart shows the fraction of instructions that can be verified compliant with a property, shown to be in violation of a property, or in-doubt. E.g. the HE bar shows that almost 80% of calls do not include a check of the return code afterwards. 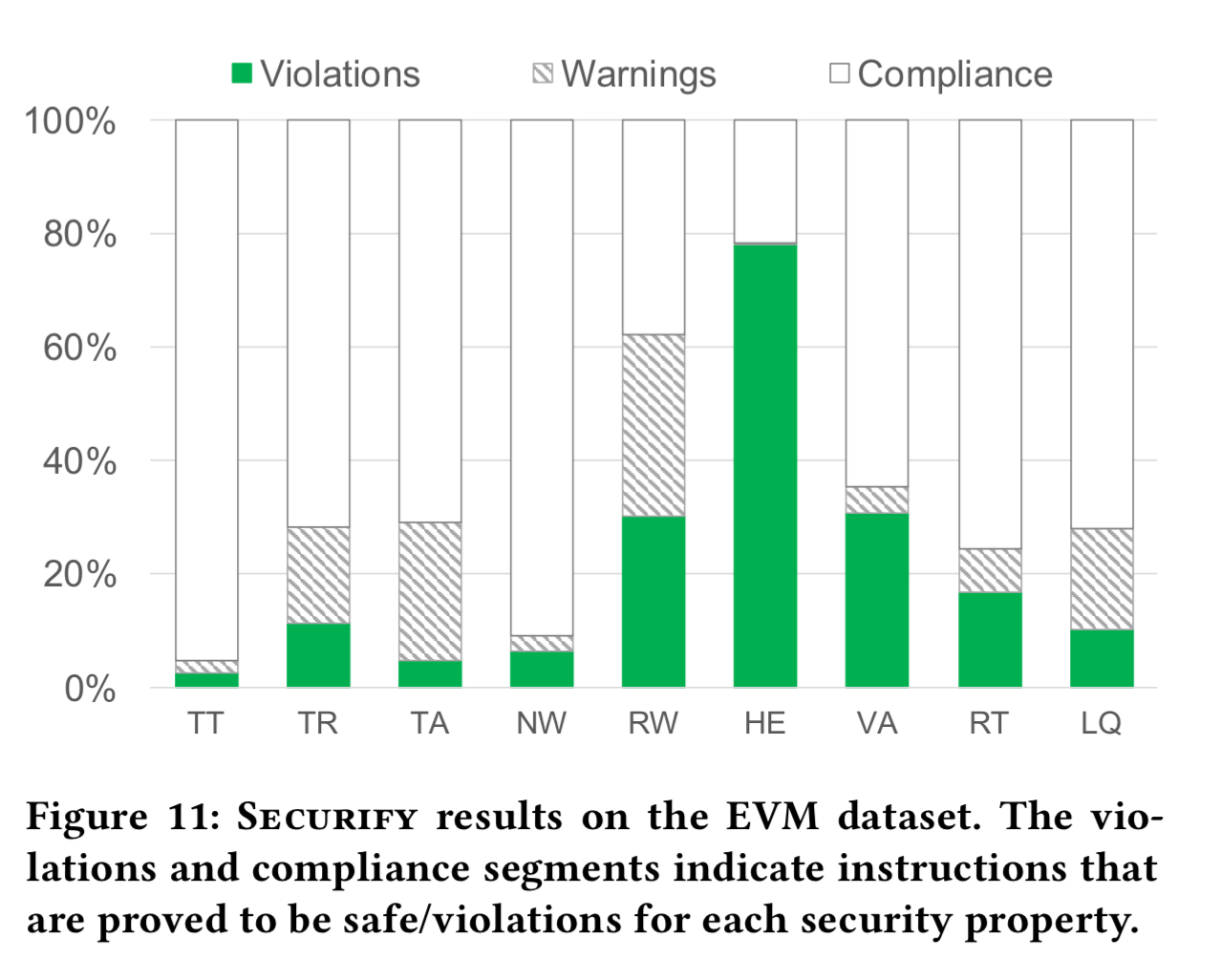 (Note that this shows a lot of security property violations in real-world contracts!).

For the Solidity dataset (the 100 uploaded contracts), the authors also did manual classification of all warnings to give insight into true warnings and false warnings:

It takes Security 30 seconds per contract on average to check all the compliance and violation patterns.

Overall, our results indicated that Securify’s patterns are effective in finding violation and establishing correctness of contracts.