Reaching agreement (consensus) is hard enough, doing it in the presence of active adversaries who can tamper with or destroy your communications is much harder still. That’s the world of Byzantine fault tolerance (BFT). We’ve looked at Practical BFT (PBFT) and HoneyBadger on previous editions of The Morning Paper. Today’s paper, BEAT, builds on top of HoneyBadger to offer BFT with even better latency and throughput.

Asynchronous BFT protocols are arguably the most appropriate solutions for building high-assurance and intrusion-tolerant permissioned blockchains in wide-are (WAN) environments, as these asynchronous protocols are inherently more robust against timing and denial-of-service (DoS) attacks that can be mounted over an unprotected network such as the Internet.

Unlike HoneyBadgerBFT, which was designed to optimize throughput only, BEAT aims to be flexible and versatile, providing protocol instances optimized for latency, throughput, bandwidth, or scalability (in terms of the number of servers).

The following table summarises the BEAT family and the key distinguishing features of each member.

There’s a lot of ground to cover here, but I’ll do my best to give you an overview. Alongside the BEAT protocols themselves, the paper also includes two new building blocks: the generalized fingerprinted cross-checksum and an asynchronous verifiable information dispersal (AVID) algorithm.

HoneyBadger supports ACS (the asynchronous common subset) meaning that it provides these guarantees:

In a threshold scheme the partial outputs (e.g. decryption shares) of at least t participants need to be combined in order to recover (decrypt) the intended value.

BEAT0, our baseline protocol, incorporates a more secure and efficient threshold encryption, a direct instantiation of threshold coin-flipping (instead of using threshold signatures), and more flexible and efficient erasure-coding support.

BEAT0’s threshold encryption uses the TDH2 scheme by Shoup and , providing 128-bit security under elliptic curve cryptography. This gives stronger security and better performance than the scheme used in HoneyBadger.

In place of the zfec erasure coding library used by HoneyBadger, which supports only Reed-Solomon codes and at most 128 servers, BEAT uses the Jerasure library giving access to more efficient erasure coding schemes and lifting the replica restriction.

Via a careful study of latency for each HoneyBadgerBFT subprotocol, we find that (1) most of the latency comes from threshold encryption and threshold signatures, and (2) somewhat surprisingly, when the load is small and there is low contention, erasure-coded reliable broadcast (AVID broadcast) causes significant latency.

BEAT2 builds on BEAT1 and also opportunistically moves the use of threshold encryption to the client side.

BEAT3 is the first member of the BEAT family targeted for BFT-storage use cases (as opposed to general SMR).

Recall that the safety and liveness properties of BFT storage remain the same as those of general SMR, with the only exception that the state may not be replicated at each server (but instead may be erasure-coded). BEAT3 can be used for blockchain applications that need append-only ledgers, and specific blockchains where the consensus protocol serves as an ordering service, such as Hyperledger Fabric.

Whereas so far we’ve been using a reliable broadcast protocol (AVID), BEAT3 replaces this with a bandwidth-efficient information dispersal scheme called AVID-FP. To disperse a block

, whereas AVID-FP can do it in

. To order transactions of size

, the communication complexity of BEAT0 is

AVID-FP is a bandwidth-efficient AVID (asynchronous verifiable information dispersal) protocol using fingerprinted cross-checksum. In AVID-FP, given a block B to be dispersed, the dealer applies an (m,n) erasure coding scheme, where

… then it generates the corresponding fingerprinted cross-checksum for B with respect to the erasure coding scheme.

Each server verifies the correctness of its fragment with respect to the fingerprint cross-checksum, “and then, roughly speaking, leverages the (much smaller) fingerprinted cross-checksum in place of the fragment in the original AVID protocol.”

BEAT4 further reduces read bandwidth using a novel erasure-coded reliable broadcast protocol called AVID-FP-Pyramid. This supports use cases where clients only need to read a fraction of a data block. AVID-FD-Pyramid is based on pyramid codes, which trade space for access efficiency in erasure-coded storage systems (about 10% extra space requirement for a 50% drop in access overhead). Pyramid codes can be efficiently built from any (n, m) systematic and MDS (maximum distance separable) code. See section 4 in the paper for brief details, or Huang et al. for an in-depth treatment. BEAT4 uses a 2-level pyramid scheme which can tolerate one failure in each level, and is able to reduce read bandwidth by 50%. Full details are in section 9 of the paper.

The evaluation is conducted on EC2 with up to 92 nodes from ten different regions in five different continents, using a variety of network sizes and batch sizes. In the figures that follow,

represents the network size such that BEAT0,1,2 & 3 require 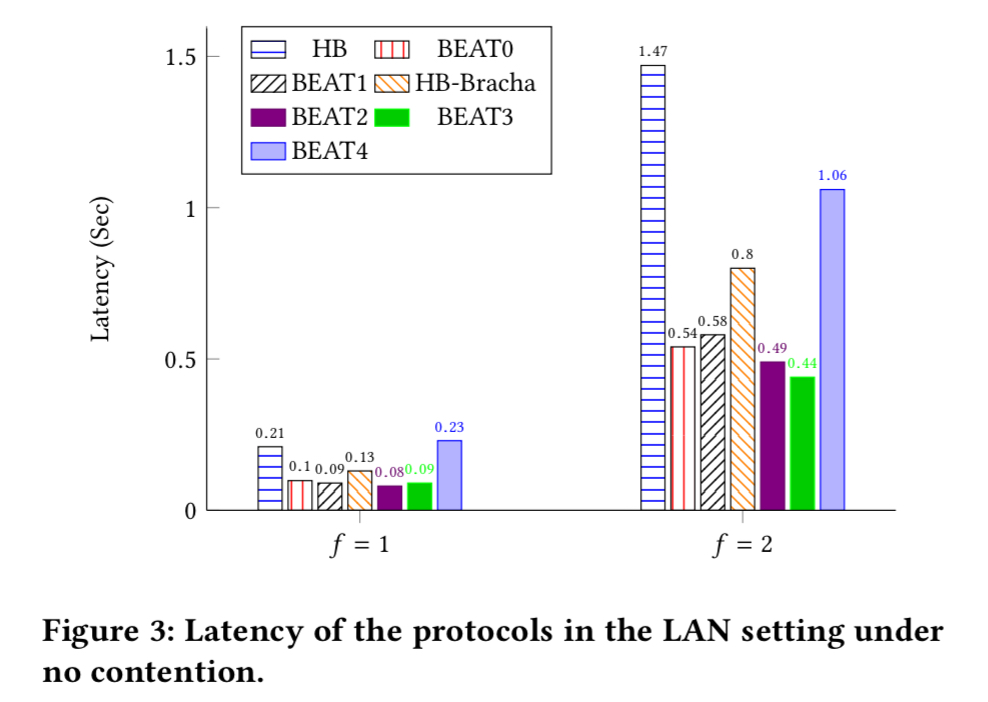 If this write-up has captured your interest, I highly encourage you to go an and read the full paper which contains significantly more detail than I was able to convey here.