…programming languages with rich support for data manipulation and statistics, such as R and Python, have become increasingly popular… [but]… they are typically designed for single machine and in-memory usage…. In contrast, parallel dataflow systems, such as Apache Flink and Apache Spark, are able to handle large amounts of data. However, data scientists are often unfamiliar with the systems’ native language and programming abstraction, which is crucial to achieve good performance.

A tempting solution is to embed Python / R support within the dataflow engine. There are two basic approaches to this today:

SparkR is of interest here because it supports both STS translation and IPC. It uses STS where possible, and falls back to IPC outside of this. Executing a simple user-defined function via IPC is about 100x slower than native execution after STS translation:

Clearly what we want is the performance of native execution (STS), but with the flexibility to use the full scope of the guest language and libraries. In theory we could just invest in building better and better STS translators (e.g., R to Java in this case), but this entails a huge effort and results in a hard-to-maintain point solution.

When faced with an M:N style integration problem, it often pays to look for a common intermediate representation (IR). If only there was some IR which both Java and R (and Python, Ruby, JavaScript,… ) could compile into, then we could build the inter-operation at the IR level. The JVM has byte code, LLVM has bitcode, and a little bit closer to home, Weld has an IR based on linear types.

In this research, Graal and Truffle provide the common ground (see One VM to rule them all).

Truffle is a language implementation framework that supports development of high performance language runtimes through self-optimising AST interpreters. The ASTs collect profiling information at runtime and specialise their structure accordingly. Languages built on top of Truffle can efficiently exchange data and access functions.

Graal is a dynamic compiler that produces highly-optimised machine code as soon as a Truffle AST reaches a stable state. De-optimisations and speculation failures are handled automatically by falling back to the AST.

The GraalVM is a multi-language execution runtime capable of running multiple languages in the same virtual machine instance, with full interoperability between all its supported languages.

GraalVM can execute Java applications on top of the HotSpot Java VM, and can execute other Truffle-based language runtimes such as JavaScript, Ruby, Python, and LLVM.

One of the default languages of the GraalVM is fastR, a high-performance GNU-R compatible R language runtime implemented using Truffle and relying on the Graal dynamic compiler. fastR supports the C API from GNU-R, and so can support many of the R packages that depend on underlying C implementations. Some R packages rely on GNU-R internals which make fastR integration harder, but fastR is continually being enhanced to support these too.

ScootR builds on the capabilities of the GraalVM to expose Flink’s internal data structures to the fastR engine. First ScootR creates an execution plan based on the R source code, and then this plan can be deployed and executed on a Flink cluster. R user-defined functions (UDFs) are executed in parallel by each worker node, and automatically optimised by the Graal JIT compiler.

Here’s an example R application making use of the ScootR dataframe API: 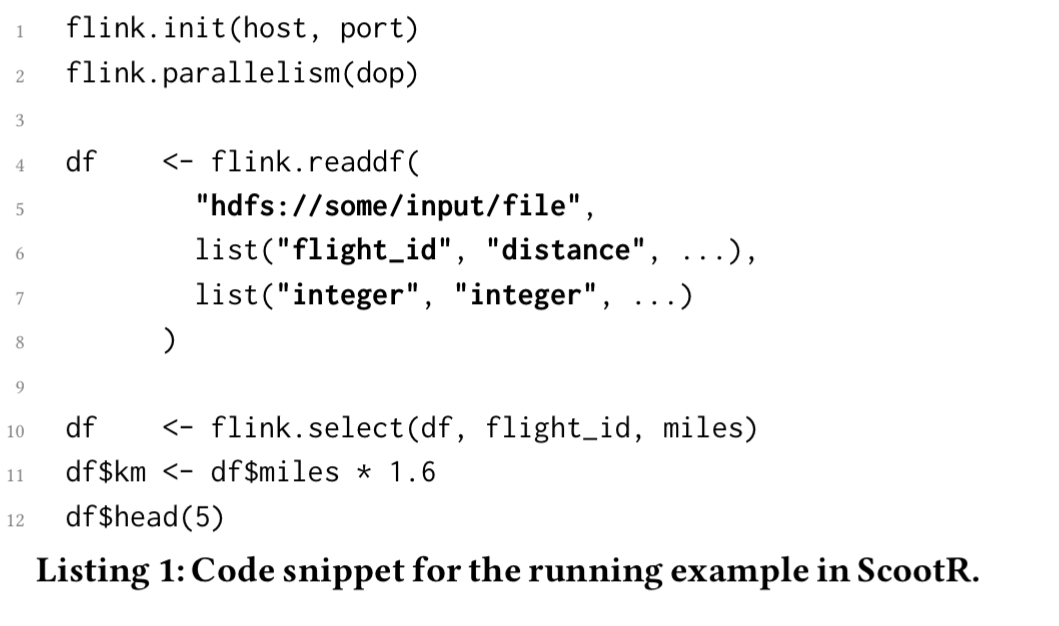 R dataframes are mapped to Flink TupleN dataset types, and invocations to ScootR’s API are mapped to Flink operators via new Truffle AST nodes (_RBuiltinNode_s). For R functions that involve user-defined code, ScootR needs to infer the input and output types. Input types are specified by the user when reading files (e.g., line 7 in the listing above). For output types ScootR just instantiates a temporary tuple, invokes the function, and inspects the output.

For efficient access of Java data types within R and vice-versa, ScootR makes use of Truffle’s language interoperability features. R functions are also rewritten to create and return Flink tuples directly in the R function.

Here’s an example of the execution plan generated for the sample R program above.

Only the apply function includes user-defined code, all other functions are replaced with the corresponding Flink operators during the plan generation phase.

The evaluation is based on two datasets:

ScootR is compared against native GNU-R, fastR, and SparkR, as well as against natively coded pipelines in Spark and Flink. Here are the single node and cluster comparisons for an ETL pipeline on the airline data as follows: 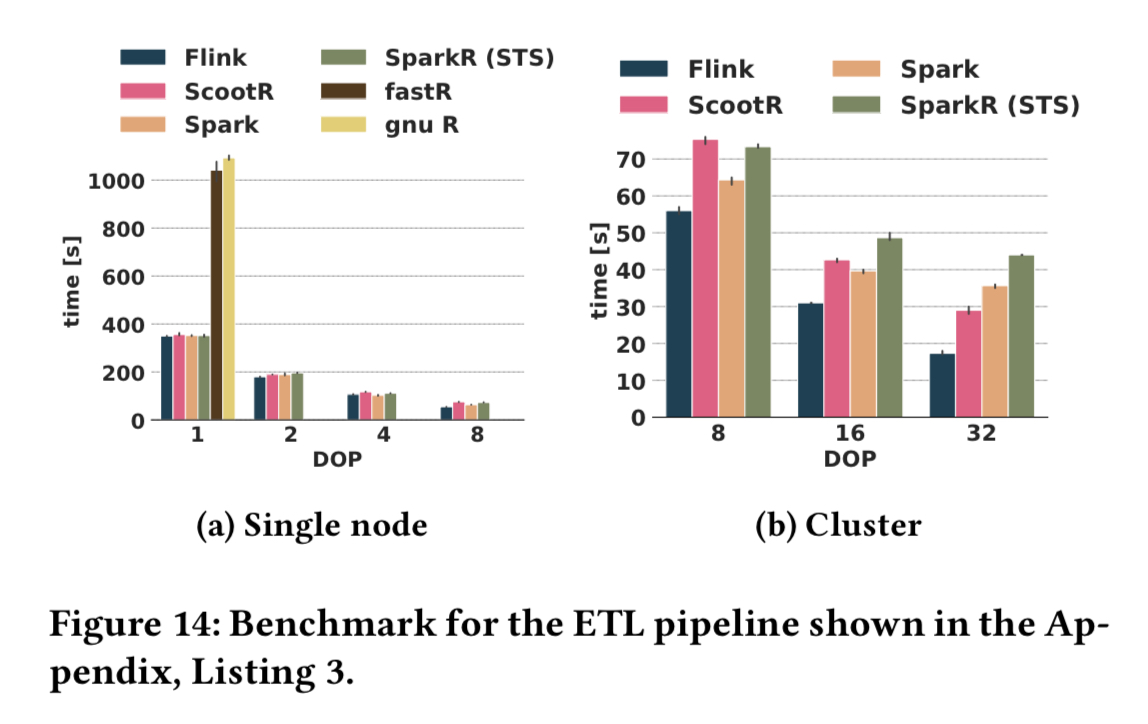 Key findings from the evaluation are as follows:

One possible direction for future work is to integrate other dynamic languages with Truffle support, such as JavasScript or Python.