There has been a lot of back and forth in the research community on adversarial attacks and defences in machine learning. Today’s paper examines a number of recently proposed defences and shows that most of them rely on forms of gradient masking. The authors develop attack techniques to overcome such defences, and 9 analyse defences from ICLR 2018 claiming to protect against white-box attacks. 7 of these turn out to rely on obfuscated gradients, and 6 of these fall to the new attacks (and the other one partially succumbs). Athalye et al. won a best paper award at ICML’18 for this work.

One of the great things about work on adversarial attacks and defences, as we’ve looked at before, is that they illuminate the strengths and weaknesses of current technology. Depending on the threat model you choose, for my own part I’m currently of the opinion that we’re unlikely to find a robust adversarial defence without a more radical re-think of how we’re doing image classification. If we’re talking about the task of ‘find an image that doesn’t fool a human, but does fool a neural network’ then I think there will always be gaps to exploit until we incorporate more human-like (e.g., higher level semantic understanding) reasoning into our classifiers. Not that the human system itself can’t be fooled of course (e.g., optical illusions).

Some defenses break gradient descent deliberately, others may do it unintentionally. Here are five clues that something isn’t right:

Shattered gradients can be overcome using a technique the authors call ‘Backward Pass Differentiable Approximation’ (BPDA). Think of a secured neural network (i.e., one that has been hardened against adversarial attacks) as being a composition of some hardening function

and a regular pre-trained classifier

such that the hardened classifier

might be a denoising function designed to remove perturbations introduced by an adversary. If

. Even if it isn’t differentiable, we know that by construction in a local area it is close to the identify function (i.e.

). So we conduct an attack by performing forward propagation through the neural network as usual, but replacing

with the identity function (or even simpler, just the evaluation of

) during backpropagation. The full (general) version of BPDA operates by finding and replacing any non-differentiable layer

with a differentiable approximation

. As before, we use the vanilla network on the forward pass, and substitute

on the backward pass.

EOT optimises the expectation over

. “The optimization problem can be solved through gradient descent… differentiating through the classifier and transformation, and approximating the expectation with samples at each gradient descent step.”

Vanishing or exploding gradients can be addressed through reparameterization. Suppose differentiating

leads to a problem. We can introduce a new differentiable function

. We can now compute gradients through

How the ICLR 2018 defenses stack up

Section 5 of the paper works through nine defenses from ICRL 2018 that claim robustness in a white-box threat model. Seven of the nine turn out to rely on some form of obfuscated gradients. For these the authors use the techniques described above to successfully attack them. 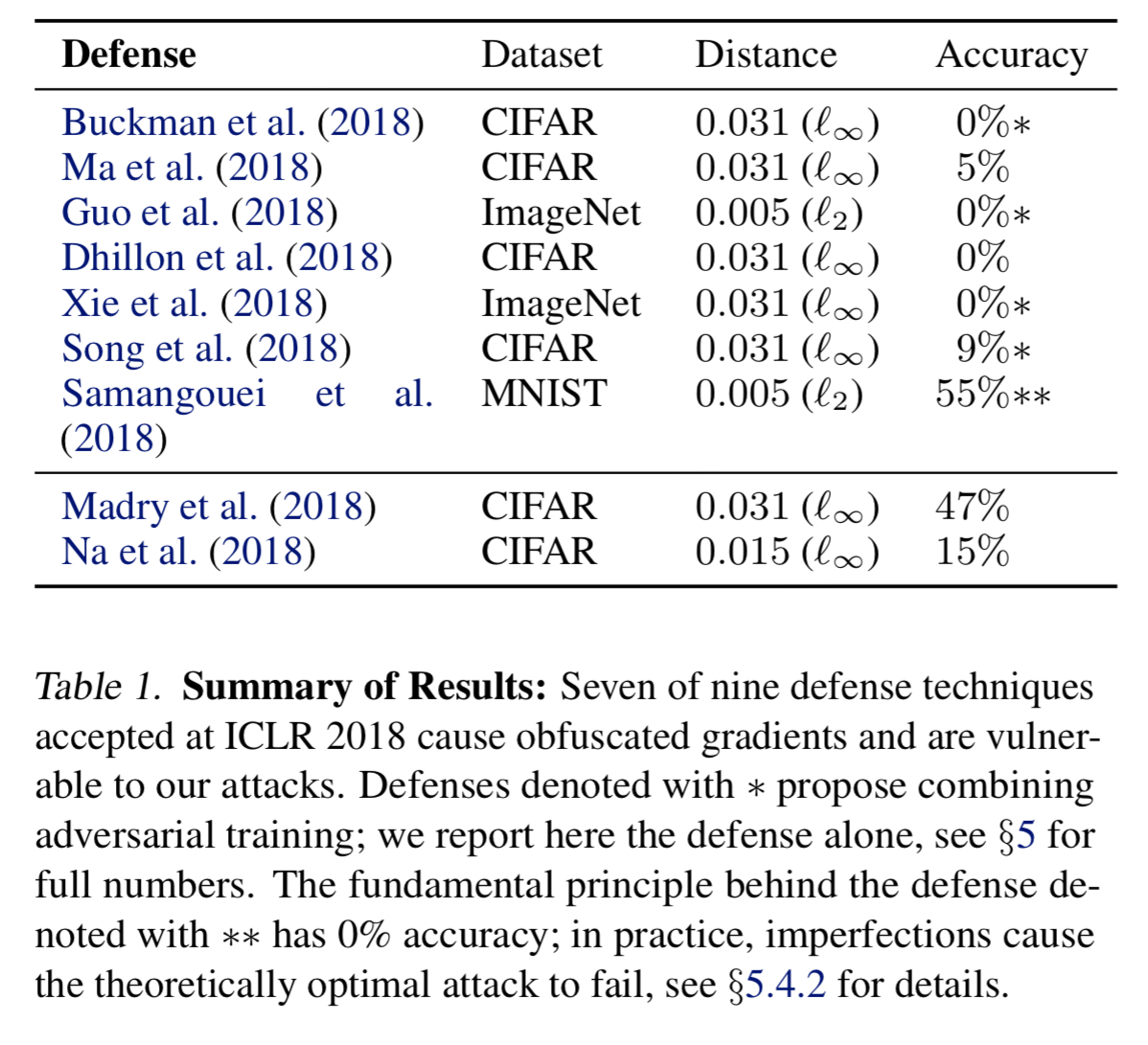 Thermometer encoding is an example of a defense that relies on gradient shattering at its core. Image pixels are mapped to l-dimensional vectors such as ‘111110000’, where the number of leading 1’s indicates the temperature (colour value) of a pixel. A BPDA attack reduces model accuracy to 30% (worse than if thermometer encoding were not used at all!).

It is possible to bypass each defense independently (and ensembles of defenses usually are not much stronger than the strongest sub-component)… with our attack, we achieve 100% targeted attack success rate and accuracy drops to 0% for the strongest defense under the smallest perturbation budget…

PixelDefend and Defense-GAN both use generators to project input images back onto a data manifold before feeding them into a classifier. Informally, this is intended to ‘purify’ them by avoiding low-probability regions in the data distribution.

PixelDefend can be defeated using BPDA, and DefenseGAN can also be evaded with BPDA, though only at a 45% success rate.

See section 5 in the paper for more details and discussion of the other defenses.

… we hope that future work will be able to avoid relying on obfuscated gradients (and other methods that only prevent gradient descent-based attacks) for perceived robustness, and use our evaluation approach to detect when this occurs.