Xu et al. have built a automated debugger that can take a single failing test execution, and with minimal interaction from a human, pinpoint the root cause of the failure. What I find really exciting about it, is that instead of brute force there’s a certain encoded intelligence in the way the analysis is undertaken which feels very natural. The first IDE / editor to integrate a tool like this wins!

The authors don’t give a name to their tool in the paper, which is going to make it awkward to refer to during this write-up. So I shall henceforth refer to it as the PI Debugger. PI here stands for probabilistic inference.

We model debugging as a probabilistic inference problem, in which the likelihood of each executed statement instance and variable being correct/faulty is modeled by a random variable. Human knowledge, human-like reasoning rules and program semantics are modeled as conditional probability distributions, also called probabilistic constraints. Solving these constraints identifies the most likely faulty statements.

In the evaluation, when debugging problems in large projects, it took on average just 3 interactions with a developer to find the root cause. Analysis times are within a few seconds. One of the neat things to fall out from using probabilistic inference is that the developer interacting with the system doesn’t have to give perfect inputs – the system copes naturally with uncertainty.

To see how PI Debugger uses probabilistic inference to pinpoint likely root causes, let’s work through a concrete example. Here’s a Python program defining a function path_url. The function takes an input url and safely encodes the path portion. For example, given as input https://example.com/abc def?x=5 the output should be https://example.com/abc%20def?x=5. 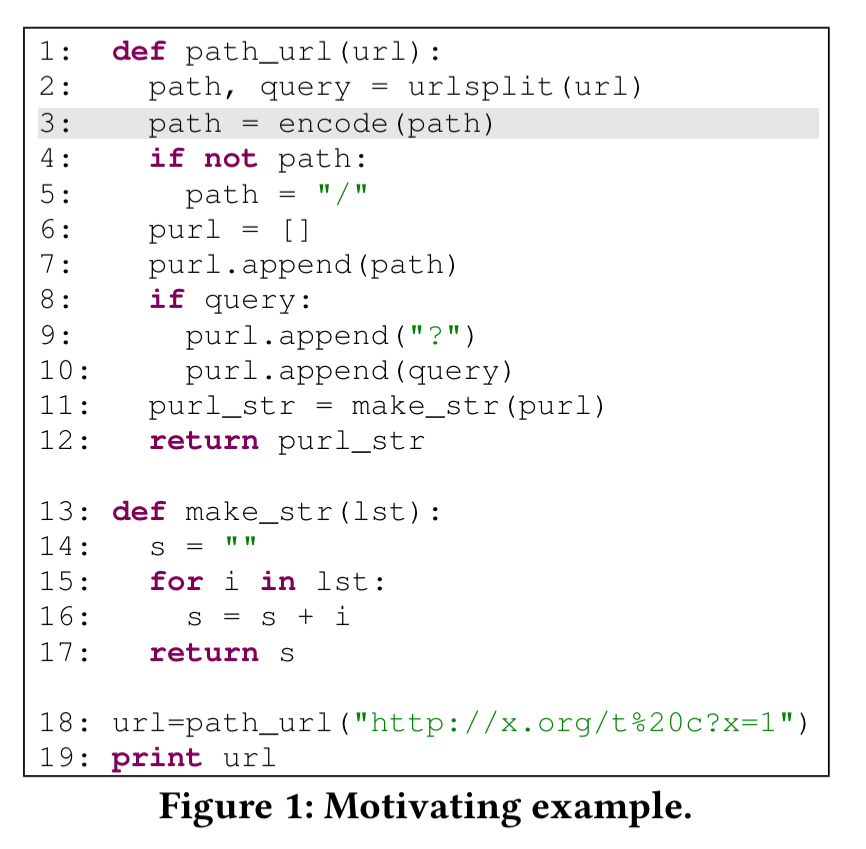 Let’s put our probabilistic thinking caps on and try and to debug the program. We ‘know’ that the url printed on line 19 is wrong, so we can assign low probability (0.05) to this value being correct. Likewise we ‘know’ that the input url on line 1 is correct, so we can assign high probability (0.95). (In probabilistic inference, it is standard not to use 0.0 or 1.0, but values close to them instead). Initially we’ll set the probability of every other program variable being set to 0.5, since we don’t know any better yet. If we can find a point in the program where the inputs are correct with relatively high probability, and the outputs are incorrect with relatively high probability, then that’s an interesting place!

Using variable name similarity inference rules, PI Debugger assigns higher correlation probability between variables with similar names (e.g. path_url and url) than those with dissimilar names (e.g. url and make_str). If the first instance of i is faulty, then purl at line 7 is also likely faulty. This could be due to a faulty value of path or a bug in append. PI Debugger knows to assign lower probabilities to bugs in library code.

If path is faulty on line 7, then either path itself is faulty, or the output of line 3 is faulty. We know that the input url on line 1 is likely correct, so the odds are in favour of the rhs of the assignment on line 3 being the culprit. And indeed it is – we should have a test to make sure that path is not already encoded before we call encode.

Although we describe the procedure step-by-step, our tool encodes everything as prior probabilities and probabilistic constraints that are automatically resolved. In other words, the entire aforementioned procedure is conducted internally by our tool and invisible to the developer. 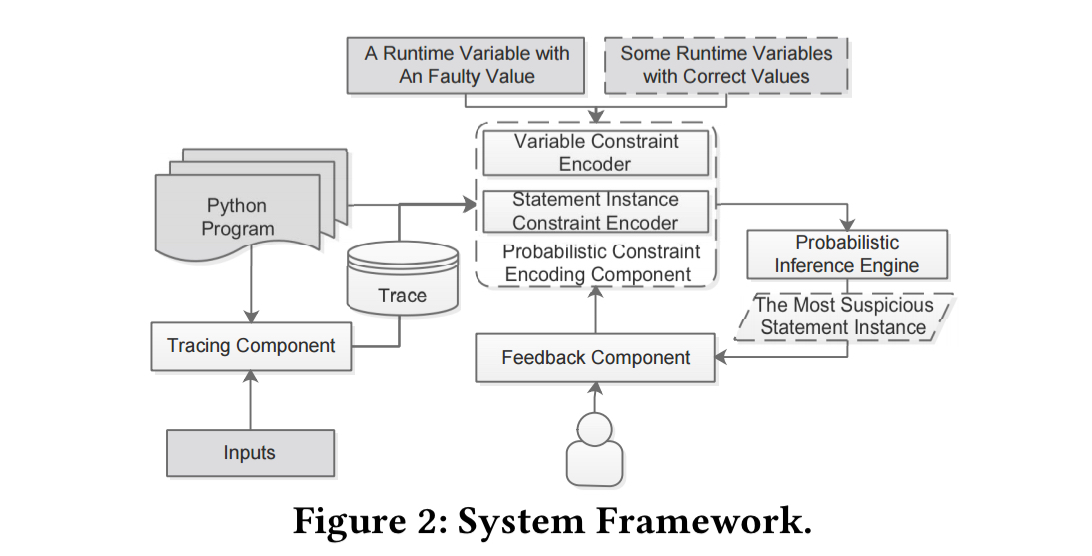 The inference procedure can be intuitively considered as a process of fusing hints from various observations (i.e., High/Low prior probabilities) through the propagation channels dictated by the constraints.

Before beginning the analysis all the runtime variables in the program trace are converted in static single assignment (SSA) form. We then proceed in two main phases:

We compute marginal probabilities based on the Sum-Product algorithm. The algorithm is essentially a procedure of message passing (also called belief propagation), in which probabilities are only propagated between adjacent nodes. In a message passing round, each node first updates its probability by integrating all the messages it receives and then sends the updated probability to its downstream receivers. The algorithm is iterative and terminates when the probabilities of all nodes converge. Our implementation is based upon libDAI, a widely used open-source probabilistic graphical model library.

At the end of the process, the most probable root cause is reported to the developer. If the developer disagrees, they can provide their assessment of the likelihood the operands in the reported statement are faulty. This then becomes a new observation and we can run inference again.

Three different kinds of constraints are generated for statement instances:

PI Debugger is applied to a set of real world bugs taken from some of the largest Python projects on GitHub. The monster table below summarises the results. The ‘PD’ column reports the number of interactions, including the final root cause step. (The ‘FD’ column is the number of steps taken by the Microbat debugging tool). PI Debugger completes inferences in around a second for most cases.

Four bugs are further selected for a user study:

16 students are randomly partitioned into two groups and asked to find the root cause of the bugs, one group using PI Debugger, and the other using pdb. On average, the PI Debugger group were 34% faster. 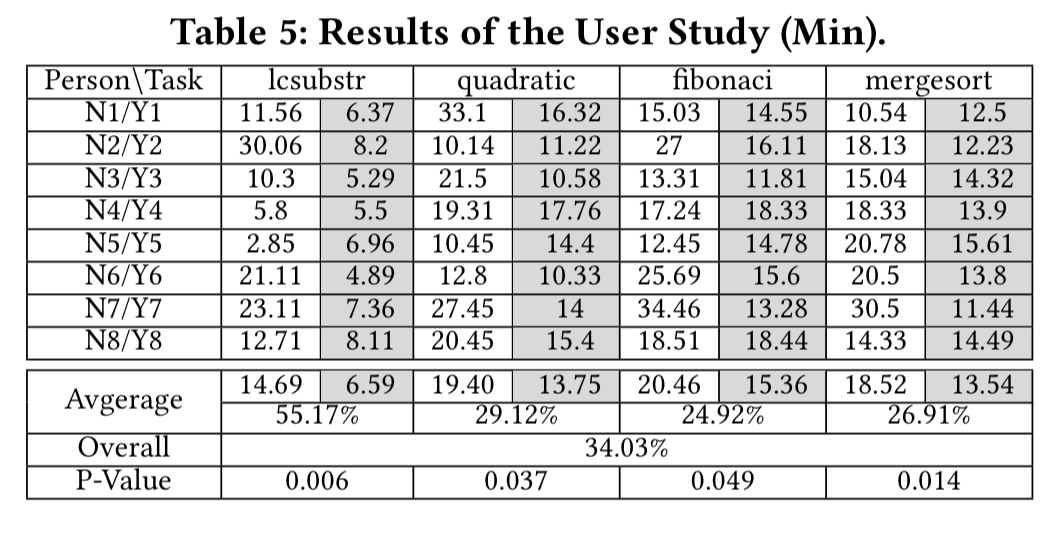 The results show that our technique can identify root causes of a set of real-world bugs in a few steps, much faster than a recent proposal that does not encode human intelligence. It also substantially improves human productivity.