You could be forgiven for thinking I’m down on smart contracts, but I actually think they’re a very exciting development that opens up a whole new world of possibilities. That’s why I’m so keen to see better ways of developing and verifying them. I’m watching the work to enable web assembly (WASM) enabled smart contracts with interest. At a higher level, Trent McConaghy’s series on Token Engineering (part I, part II, part III) also appeals greatly. Today’s paper choice, ‘Designing secure Ethereum smart contracts’ is about embedding a collection of lower-level smart contract design patterns into a contract generation tool, helping developers avoid some of the more fundamental errors. If you’re still coming up to speed on why such a tool might be a good idea, the Zeus paper provides some good background, which I won’t retread here.

Prior work focused on addressing these issues (vulnerabilities) in existing contracts by providing tools for verifying correctness and for identifying common vulnerabilities. In this paper, we explore a different avenue by proposing and implementing FSolidM, a novel framework for creating secure smart contracts.

FSolidM is based on a formal finite-state machine model of smart contracts, with Ethereum Solidity as the current generation target. Users develop contracts using a combination of a graphical editor and a code editor. The base tool captures the contract states, transitions, and guards. Plugins can then be used to embellish the contracts with additional desirable properties (to my eye, they look awfully like aspects. YMMV). 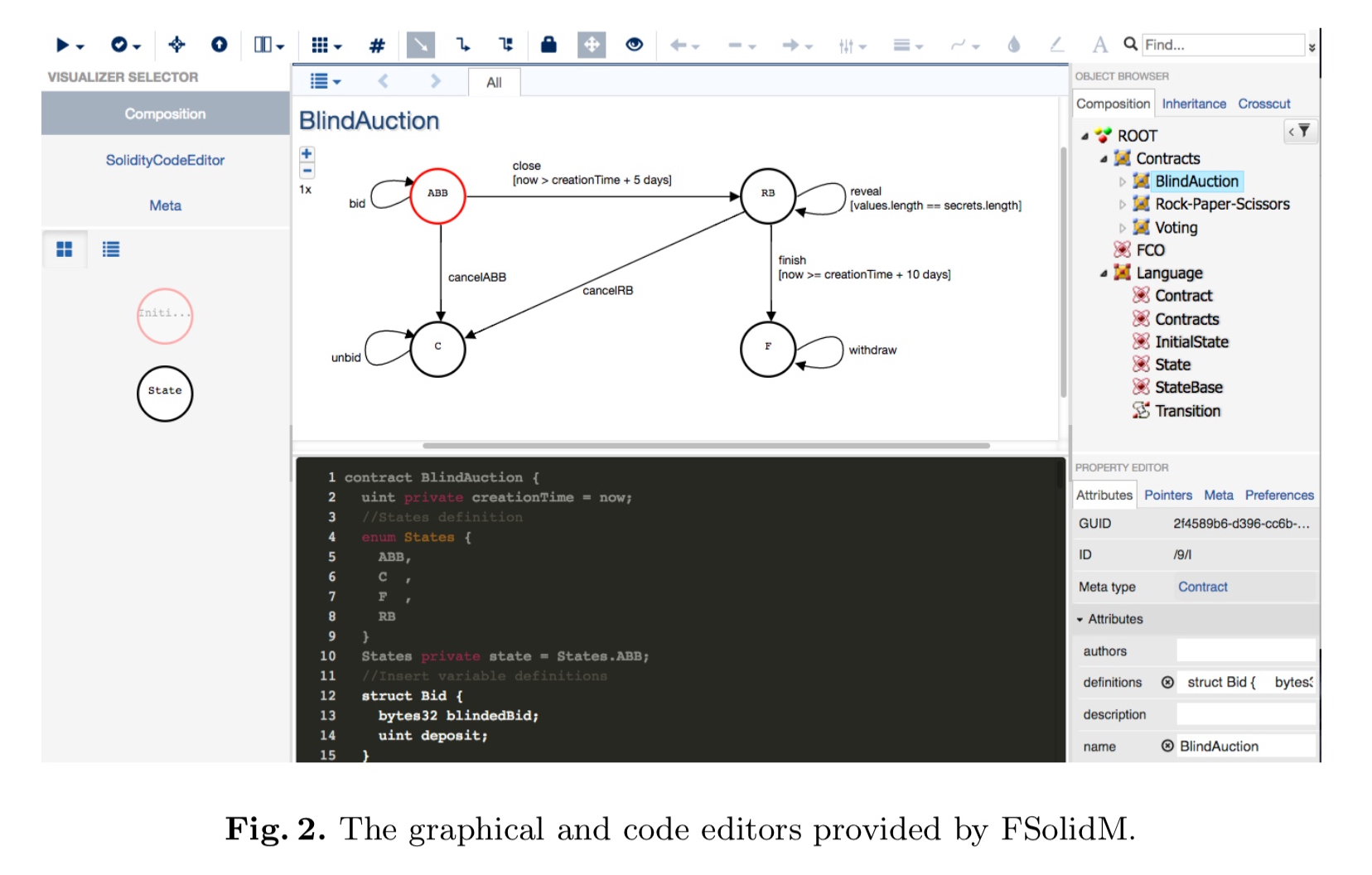 If you want to play with FSolidM for yourself, there’s a hosted version available at https://cps-vo.org/group/SmartContracts and the source is in GitHub at https://github.com/anmavrid/smart-contracts.

The running example in the paper is a blind auction smart contract. In this auction bidders send only hashed versions of their bids (i.e., they do not reveal the actual amount of the bid), and at the same time are required to make a deposit greater than or equal to the amount of the bid. The deposit ensures that the winner of the auction actually pays up.

Every state has an associated set of transitions corresponding to actions that a user can perform during a blind auction. Actions may be guarded (checked pre-conditions) — guard clauses are denoted using square brackets. Guards and actions interact with variables which can be of the following types:

To specify a smart contract, the developer provides the following information: 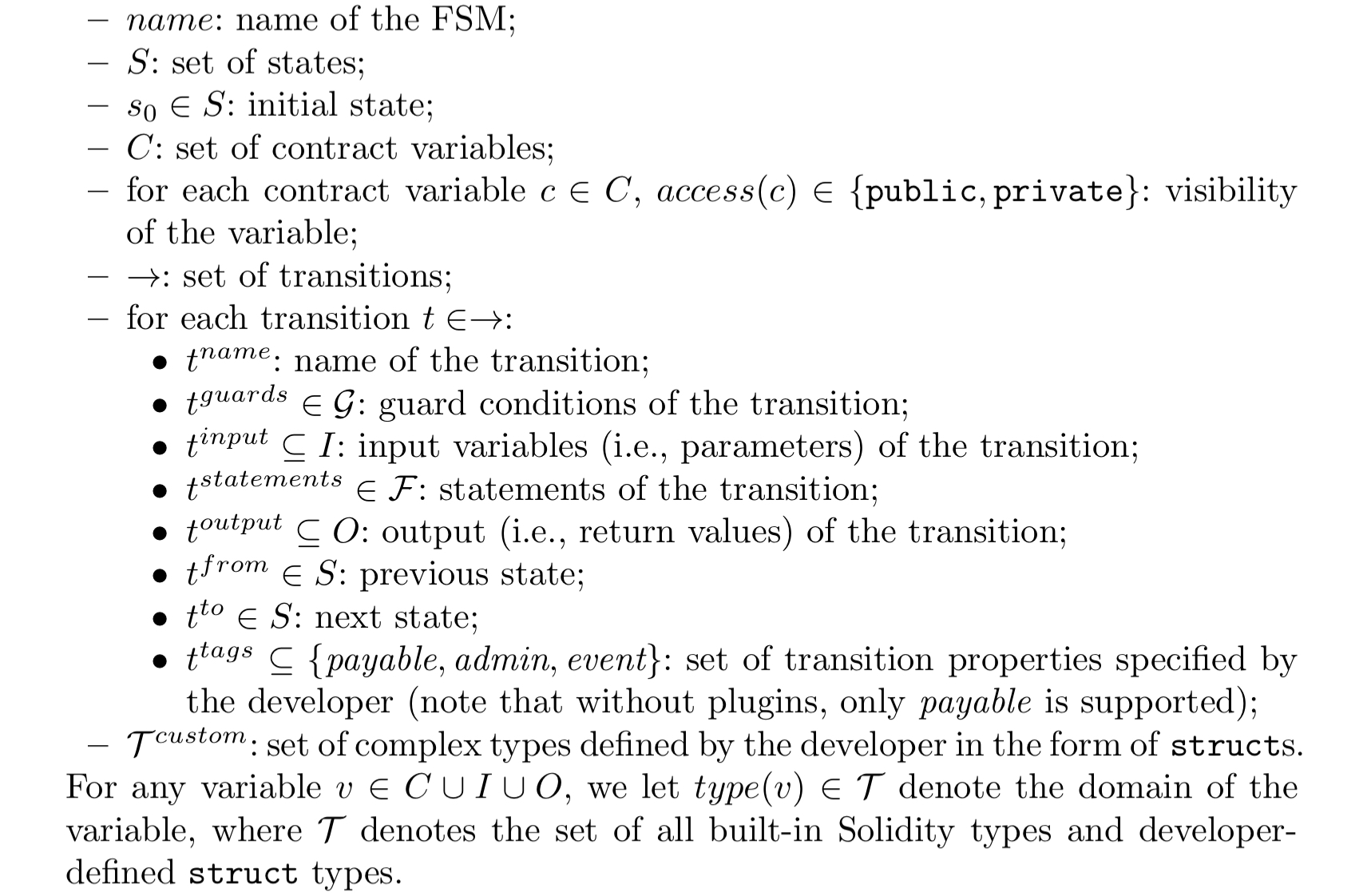 The full generated contract for the blind auction example can be found in appendix C of this arVix version of the paper.

(This example code has the locking and transition counter security extension plugins enabled, we’ll look at those next). It would be interesting to run this code through Zeus!

So far then, we have generator which can build the basic skeleton of a contract. By enabling additional plugins, extra functionality can be added to the contract. The plugins fall into two main categories: protection against common vulnerabilities, and support for low-level contract design patterns.

The locking plugin is designed to prevent reentrancy vulnerabilities. It introduces a private boolean variable, locked, and then uses the equivalent of around advice to wrap every transition using this simple pattern:

The locking plugin is always the outermost instrumentation on any transition.

If the behaviour of a transaction depends on the state of a contract, then it’s possible that state may change between a transaction being submitted and the transaction actually executing (transaction-ordering dependence). This can lead to security issues if care is not taken.

The automatic timed transitions plugins supports time-constraint based patterns — for example, an auction timing out after a certain period. The plugin is implemented as a modifier applied to every function that checks whether any timed transitions must be executed before the invoked transition is executed. The main benefit is avoiding accidentally missing a transition when attempting to implement the same function manually.

The timer support is fairly limited though. You can specify multiple timed transitions, but each timer is specified as a number of seconds since the creation of the contract. If you wanted any other pattern, you’re out of luck.

The access control plugin manages a list of administrators at runtime (identified by their addresses) and enables developers to forbid non-administrators from accessing certain functions. 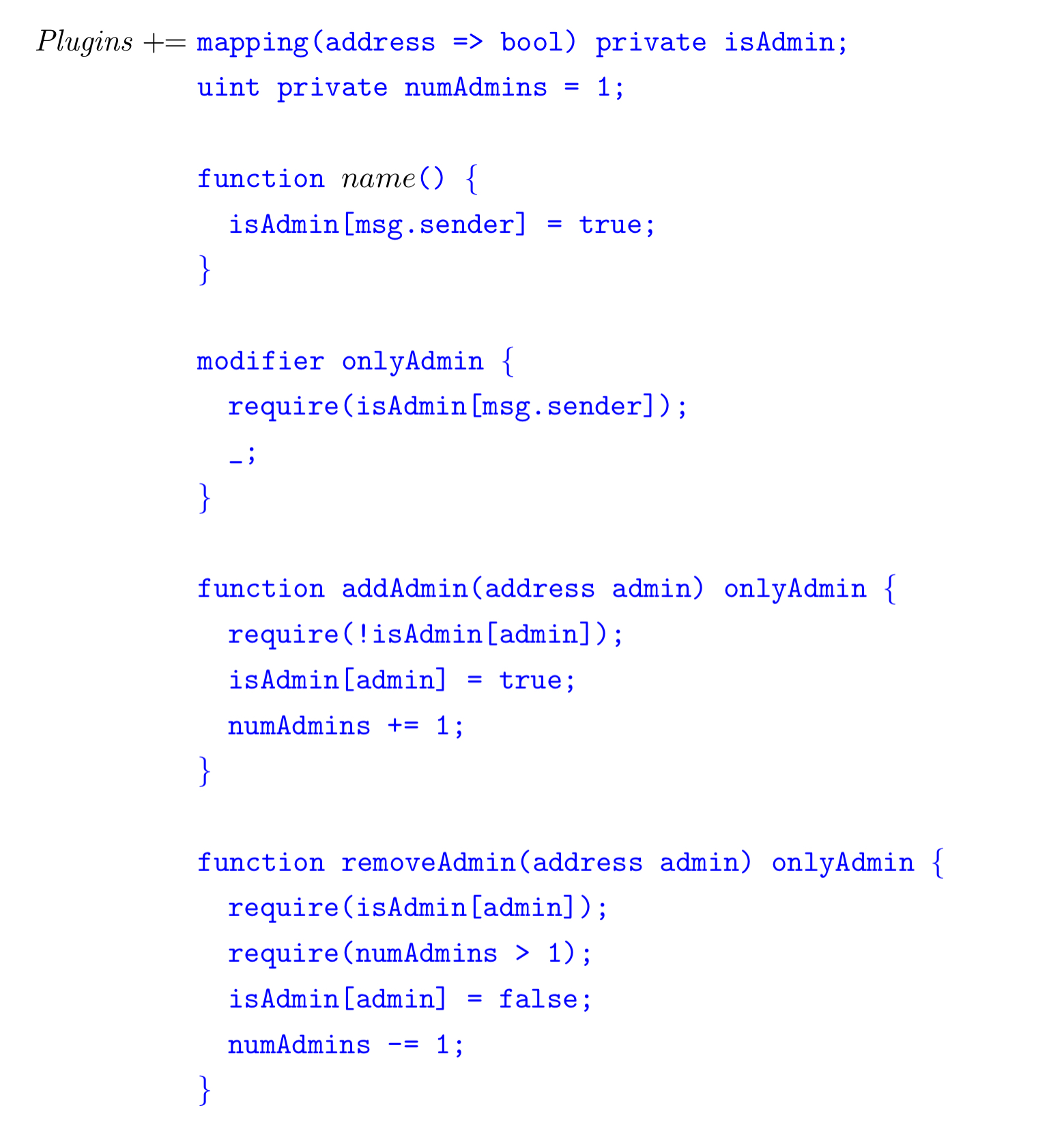 The events plugin can be used to notify users of transition executions. When the plugin is enabled, transitions tagged with event emit a Solidity event after they are executed. Ethereum clients can listen to such events.

It’s all actually fairly simple stuff, but it’s a promising start, and the outlined directions for future work mean this might be an interesting tool to keep an eye on: