Maybe I’ve been pretty naive here, but I really had no idea about the extent of manipulation (blackhat SEO) of autocomplete suggestions for search until I read this paper. But when you think about it, it makes sense that people would be doing this: it’s a lot easier to generate a bunch of fake queries to try and manipulate autocomplete suggestions than it is to create a collection of highly ranked content. Here’s an example of what we’re talking about: 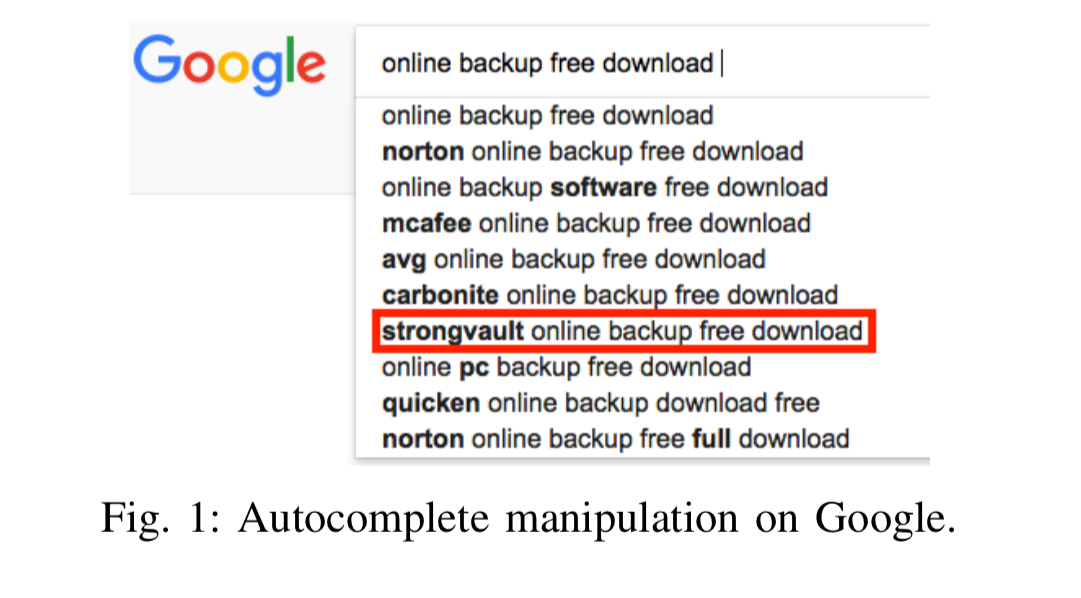 The paper contains two related investigations: one looking at the growing ecosystem of ‘autocomplete manipulation as-a-service’ providers, and one using a tool called Sacabuche to look at the extent to which manipulated suggestions have been able to pollute the autocomplete suggestion lists from the major search engines.

Looking into the manipulated autocomplete results reported by Sacabuche, we are surprised to find that this new threat is indeed pervasive, having a large impact on today’s Internet. More specifically, over 383K manipulated suggestions (across 275K triggers) were found from mainstream search engines, including Google, Bing, and Yahoo!. Particularly, we found at least 0.48% of the Google autocomplete results are polluted.

The manipulations are often used to promote dodgy sites, for example, with low quality content, malware, phishing. And by the way, there’s absolutely no reason you couldn’t use the same techniques to manipulate autocomplete suggestions for politicians…

According to publicly available information, autocomplete suggestions at major search engines rely heavily on the popularity of queries observed from search logs together with their freshness (how trending they are as popular topics). This makes them vulnerable to adversaries capable of forging a large number of queries.

Determining how widespread manipulation is

The authors built a tool called Sacabuche (Search AutoComplete Abuse Checking) to try and figure out just how widespread manipulation is in practice.

Our key insight is that a trigger and its suggestion are often less related when the autocomplete has been manipulated, presumably due to the fact that a missuggestion tends to promote a specific and rarely known product, which is less relevant to the corresponding trigger.

Consider a search query “bingo sites play free” a genuine autocomplete suggestion might be “free bingo sites for us players,” and a manipulated one “play free bingo online now an moonbingo.com.” The latter is more specific, and therefore less similar to the trigger. The insight leads to a two-stage process for uncovering manipulated suggestions: first evaluating autocomplete suggestions, and then verifying search results for suggestions that seem suspicious to get further confirmation. 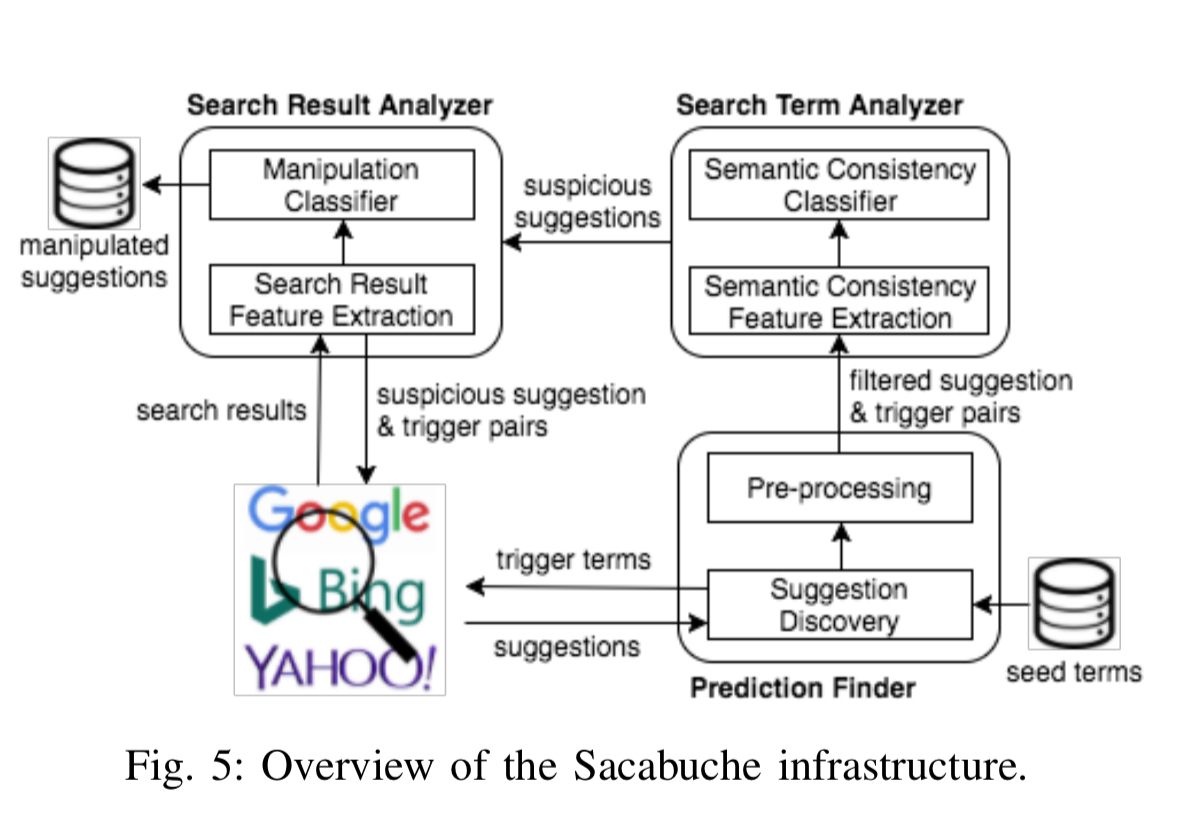 Hitting the autocomplete endpoint is cheap and easy, so starting with a set of seed words and growing from there, it’s possible to submit a query and get back a set of autocomplete suggestions. It’s then possible to compare the semantic distance between the trigger (search term) and the suggestions. The algorithm uses word2vec at its core (see ‘The Amazing Power of Word Vectors’). 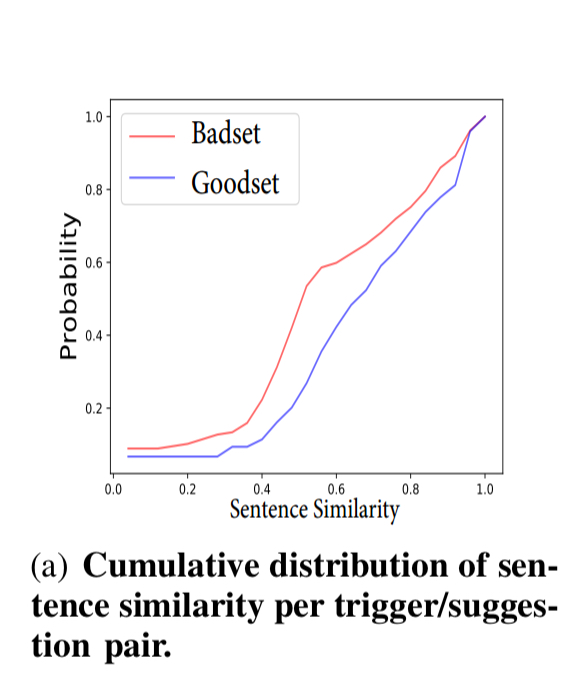 Furthermore, if you actually use a suggestion to perform a search, it turns out that for genuine suggestions the search results are in line with those you would get for the initial trigger, but for missuggestions, they often are not. Consider the trigger “online backup free download.” If you search on that term, you might see results like this: 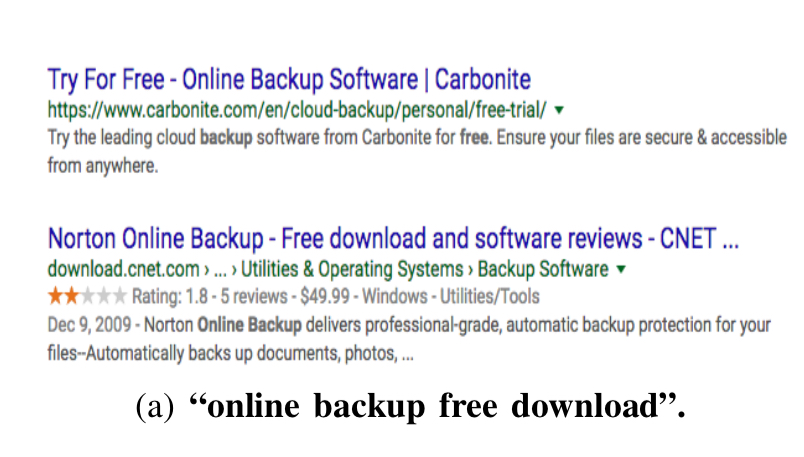 Which are not too dissimilar from the results you might see if you instead search on one of the genuine autocomplete suggestions: “norton online backup free download” : 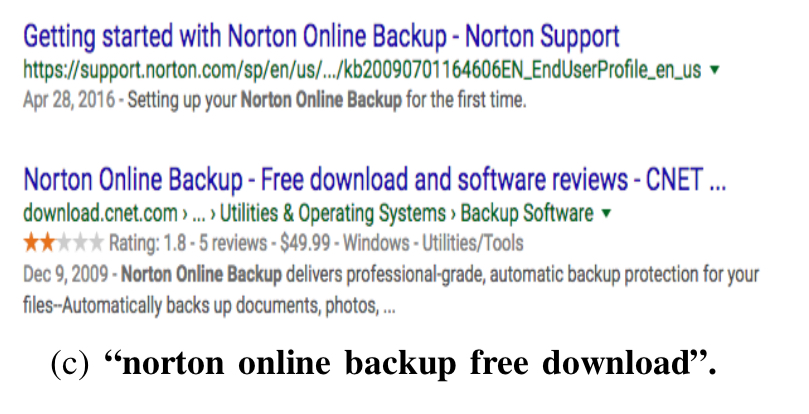 However, if we look at the manipulated suggestion “strongvault online backup free download” the search results look very different to those produced by the initial trigger: 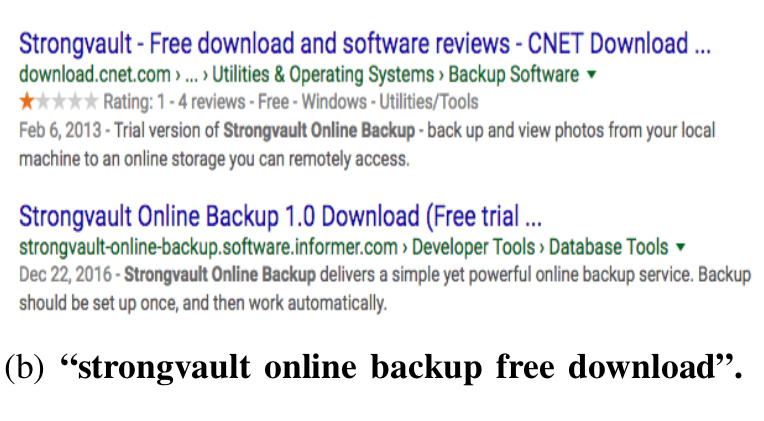 The search result analysis uses the Rank-Biased Overlap algorithm to evaluate the similarity of two ranked lists. Not only are the suggestions different, but it also turns out that there tend to be fewer results overall when a manipulated suggestion is queried, and the domains involved often have low Alexa ranking.

Overall the set of features used to detect manipulated suggestions is as follows:

Sacabuche is used to automatically analyse 114 million suggestions and trigger pairs, and 1.6 million search result pages. The seed triggers are obtained from a set of ‘hot’ phrases representing popular search interests, coupled with 386 gambling keywords, and 514 pharmaceutical keywords. These latter two are added because they tend to be popular for manipulation, but are under-represented in the population at large. From the seed keywords new suggestion triggers are iteratively discovered from the autocomplete suggestions.

Altogether, our Search Term Analyzer found 1 million pairs to be suspicious. These pairs were further inspected by the Search Result Analyzer, which reported 460K to be illegitimate. Among all those detected, 5.6% of manipulated suggestions include links to compromised or malicious websites in their top 20 search results. In this step, we manually inspected 1K suggestion trigger pair, and concluded that Sacabuche achieved a precision of 95.4% on the unknown set.

The following table shows the most popular categories for autocomplete manipulation: 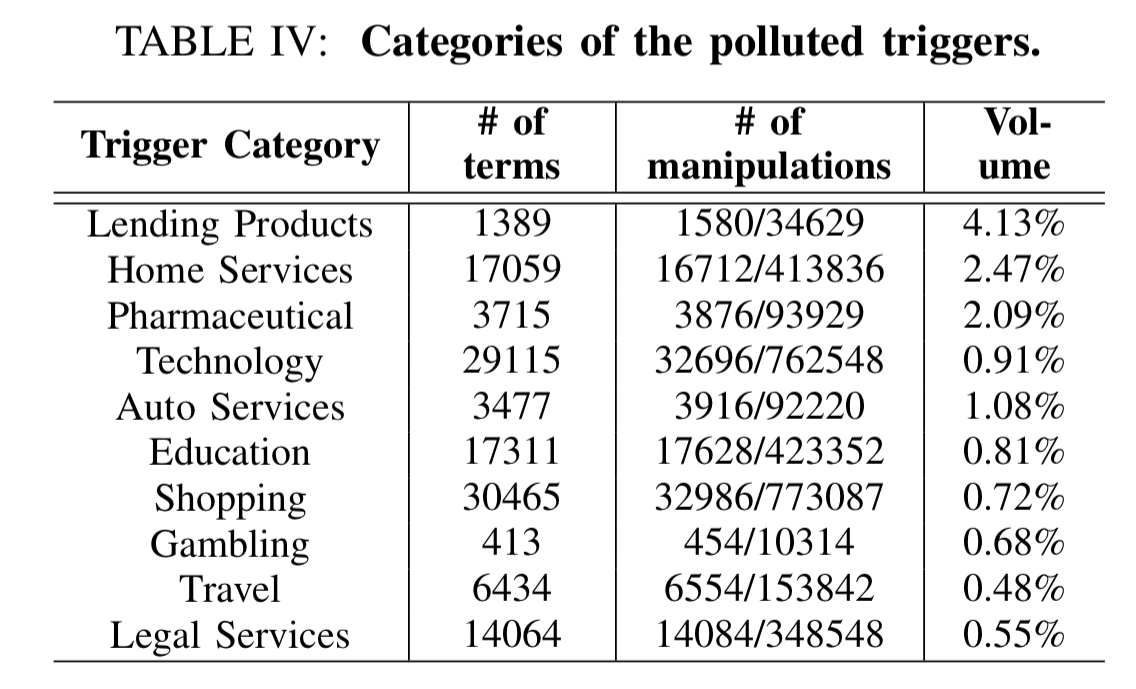 Manipulated suggestions tend to follow common patterns, the most popular being the “trigger relevant content + target” pattern. For example, “free web hosting by example.com.” Here are the top five patterns that indicate you might be looking at a manipulated suggestion:

Promoting autocomplete suggestions is a booming business! It works like this: 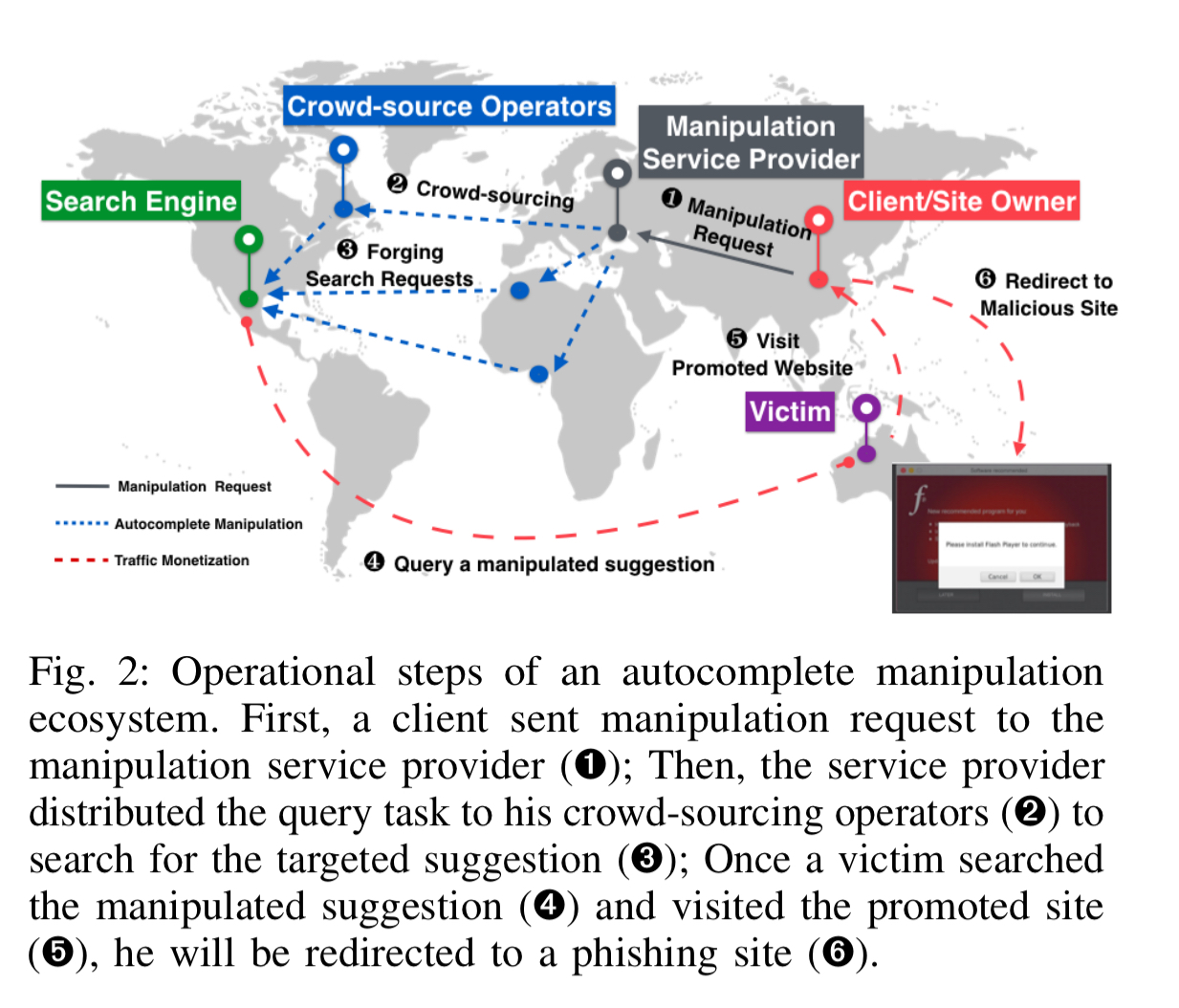 An example of an autocomplete manipulation system is iXiala, which provides a manipulation service on 19 different platforms (web and mobile) including search engines, C2C, and B2C platforms.

The services use a combination of search log pollution and search result pollution. Search logs are often polluted through crowd-sourcing of search requests. For example, the authors purchased a service from Affordable Reputation Management, who hired crowd-sourcing operators around the U.S. to perform the search. The workers performed the following three-step process:

Surprisingly, the operation took effect in just one month with our suggestion phrase ranking first in the autocomplete list. The service provider claimed that this approach was difficult to detect since the searches were real and the operations performed by the crowd-sourcing operators were unrecognizable from the normal activities.

Manipulation campaigns often monetise by attracting victims to download malware of visit phishing sites, or by selling the victim’s traffic through an affiliate program. The top 3 affiliate networks involved in these schemes are shown in the table below.

Promoting a phrase costs between $300 to $ 2,500 per month depending on the target search engines and the popularity of the phrase. It takes 1-3 months to get the suggestion visible in the autocomplete results.

Hence the average revenue for the service providers to successfully manipulate one suggestion is $ 2,544… Through the communication with the provider iXiala, we found that 10K sites requested suggestion manipulation on it, which related to a revenue of $ 569K per week with 465K manipulated suggestions. At the same time, iXiala had a group of operators, who earned a commission of $ 54K per week. Hence, iXiala earned a profit of around $ 515K per week.

Our findings reveal the significant impact of the threat, with hundreds of thousands of manipulated terms promoted through major search engines (Google, Bing, Yahoo!), spreading low-quality content and even malware and phishing. Also discovered in this study are the sophisticated evasion and promotion techniques employed in the attack and exceedingly long lifetimes of the abused terms, which call for further studies on the illicit activities and serious efforts to mitigate the ultimately eliminate this threat.