We show that injection vulnerabilities are prevalent in practice, both due to eval, which was previously studied for browser code, and due to the powerful exec API introduced in Node.js. Our study suggests that thousands of modules may be vulnerable to command injection attacks and that fixing them takes a long time, even for popular projects.

The Synode tool developed by the authors combines static analysis with runtime protection to defend against such attacks. You can get it at https://github.com/sola-da/Synode.

There are two families of APIs that may allow an attacker to inject unexpected code:

Of course, you can combine the two to eval a string containing an exec command.

Node.js code has direct access to the file system, network resources, and any other operating system-level resources provided to processes. As a result, injections are among the most serious security threats on Node.js…

Consider calling this function as follows: backupFile('-help &amp;&amp; rm -rf * &amp;&amp; echo ", "'). As the authors delightfully put it: “Unfortunately this command does not backup any files but instead it creates space for future backups by deleting all files in the current directory.”

How widespread is the problem?

The authors studies 235,850 npm modules, and found that 3% (7,686 modules) and 4% (9,111 modules) use exec and eval respectively. Once you start looking at dependencies though (i.e., modules that depend on an exec- or eval-using module), then about 20% of all modules turn out to directly or indirectly depend on at least one injection API. 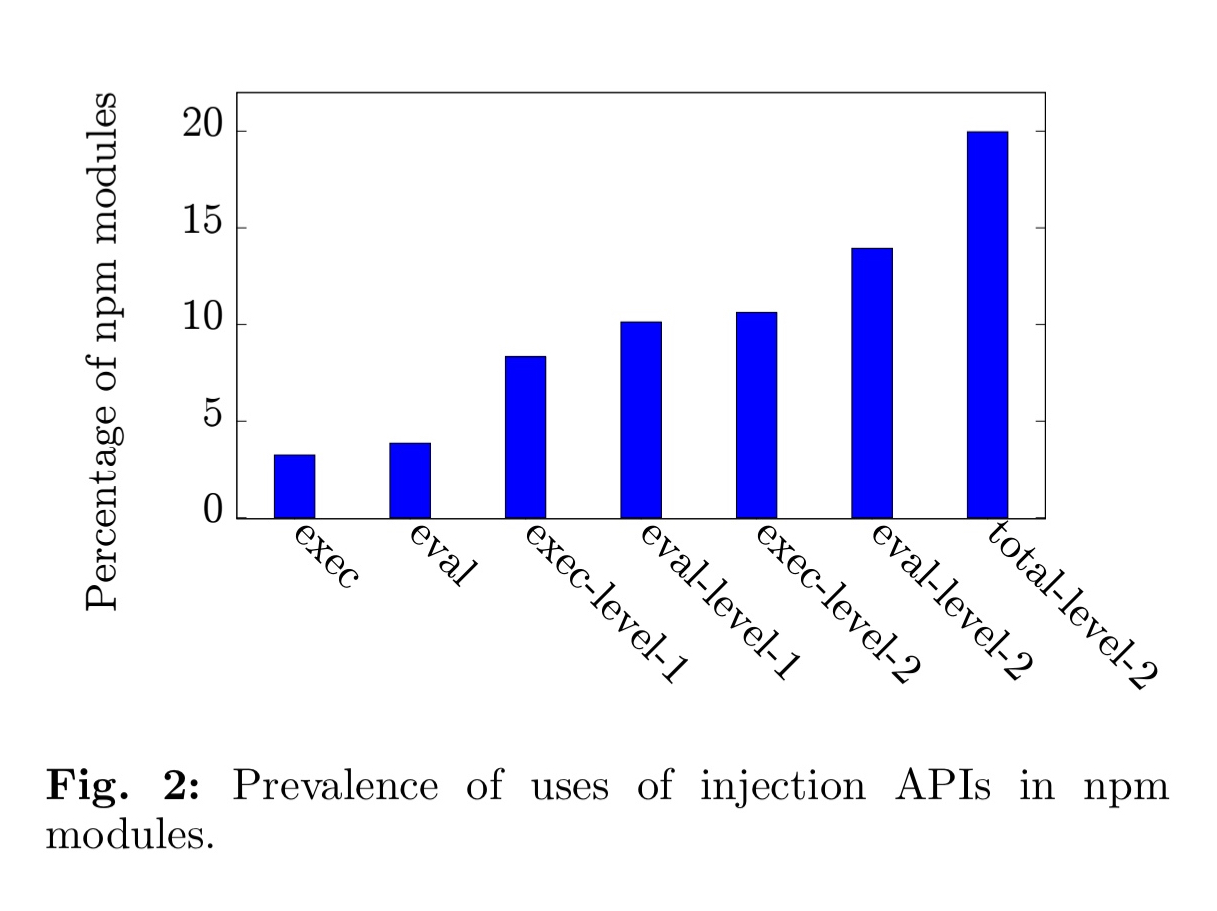 Fixing the most popular 5% of injection modules would protect almost 90% of the directly dependent modules. Unfortunately, that still requires changing over 780 modules.

Perhaps these vulnerabilities are in seldom-used modules though? That turns out not to be the case: 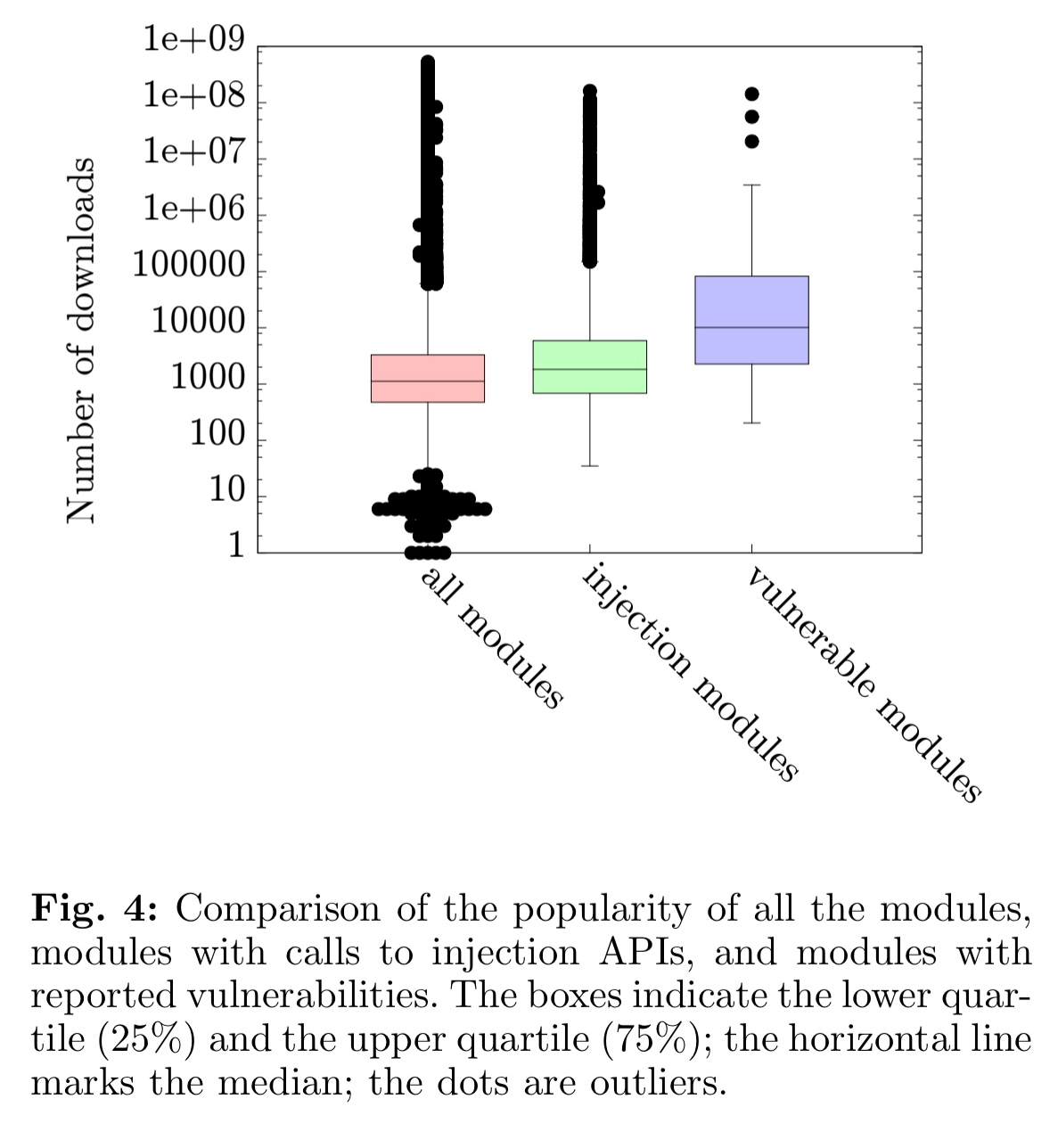 The authors then looked at call-sites to determine the extent to which data is checked before being passed into injection APIs. Can the site be reached by potentially attacker-controlled data, and are there mitigation checks in place?

A staggering 90% of the call sites do not use any mitigation technique at all.

Another 9% attempt to sanitise input using regular expressions. Unfortunately, most of those were not correctly implemented. No module used a third-party sanitization module to prevent injections, even though several such modules exist.

Reporting a representative set of 20 vulnerabilities to module developers did not result in quick fixes. “Most of the developers acknowledge the problem. However, in the course of several months only 3 of the 20 vulnerabilities have been completely fixed, confirming earlier observations about the difficulty of effectively notifying developers.”

…the risk of injection vulnerabilities is widespread, and a practical technique to mitigate them must support module maintainers who are not particularly responsive. Motivated by these findings, this section presents Synode…

Synode combines static analysis to detect places where injection attacks can potentially take place, with runtime enforcement (guided by the results of that analysis) to ensure that injection attacks are detected and thwarted. The recommended deployment of Synode is via an npm post-installation script. This script will run on each explicitly declared third-party dependent and perform the code rewriting to add dynamic enforcement if needed. 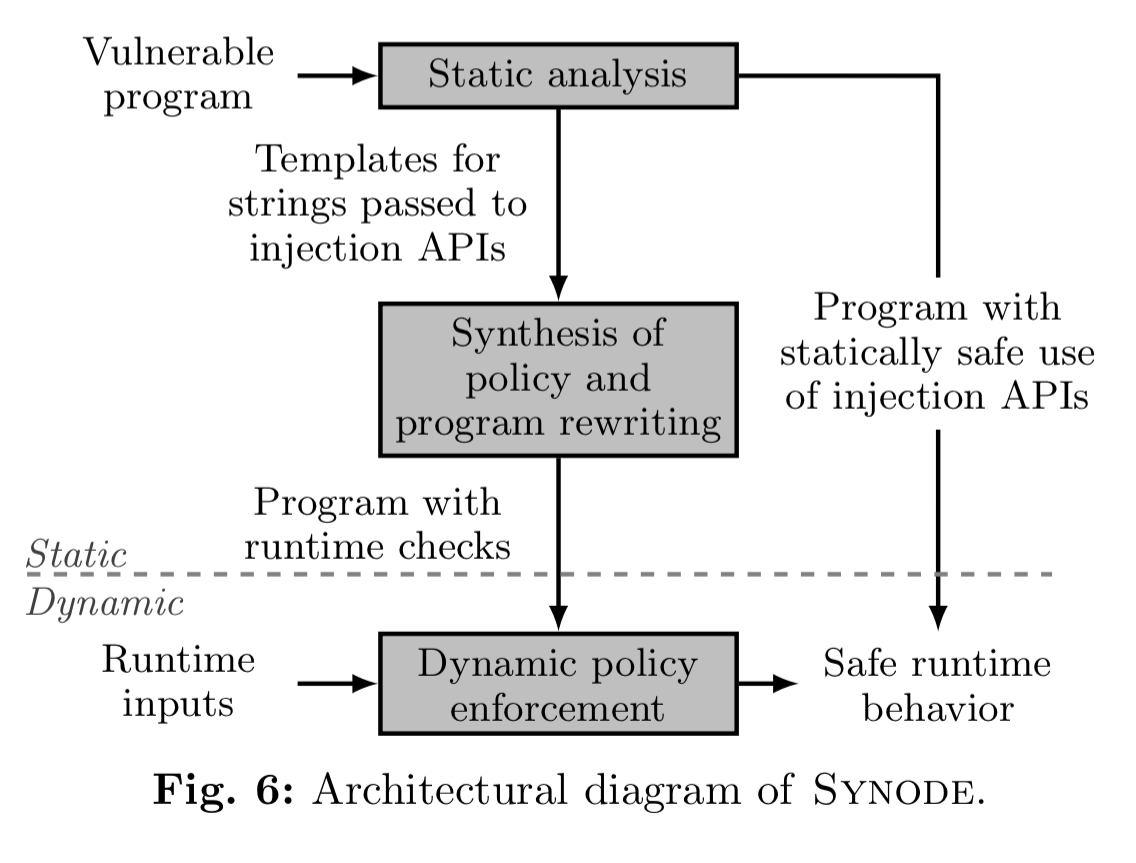 The static analysis phase identifies call sites for injection APIs, and summarises what is known statically about all of the values that may be passed to the function in a template tree. For example: 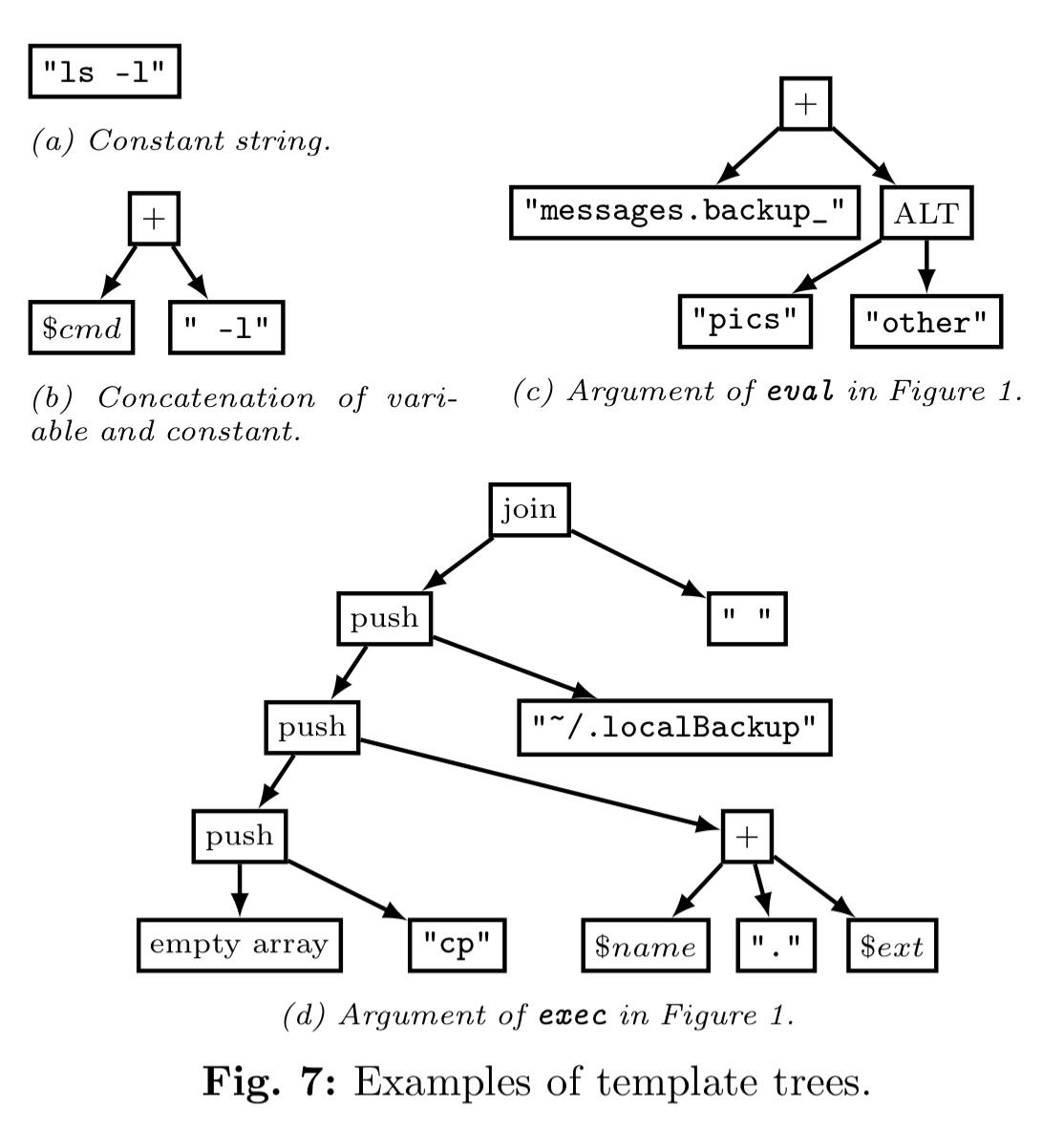 The template trees are then reduced to a set of templates, where a template is a sequence of strings and inserts: 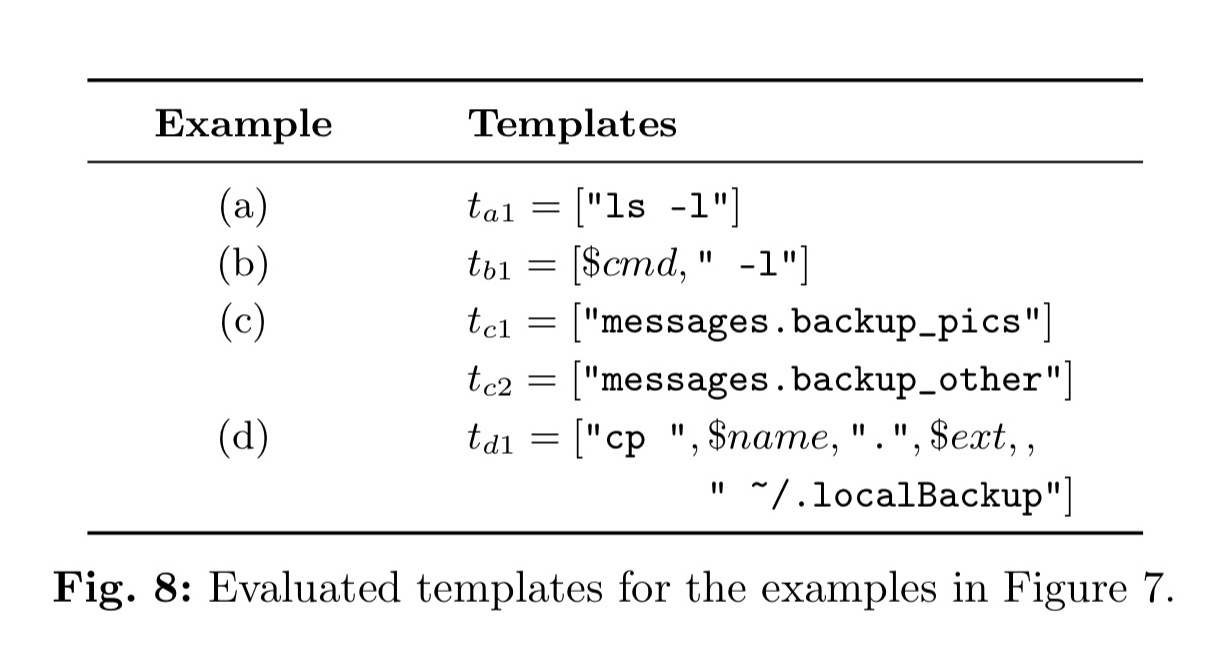 The goal of runtime checking is to prevent values that expand the template computed for the call site in a way that is likely to be unforeseen by the developer, and of course to do so as efficiently as possible. To achieve these combined aims the statically extracted set of templates are first expanded into a set of partial abstract syntax trees (PAST) that represent the expected structure of benign values. Then at runtime the value passed to the injection API is parsed into an AST, and this is compared against the pre-computed PASTs. This process ensures that (i) the runtime AST is derivable from at least one of the PASTs by expanding the unknown substrees, and (ii) the expansions remain within an allowed subset of all possible AST nodes. 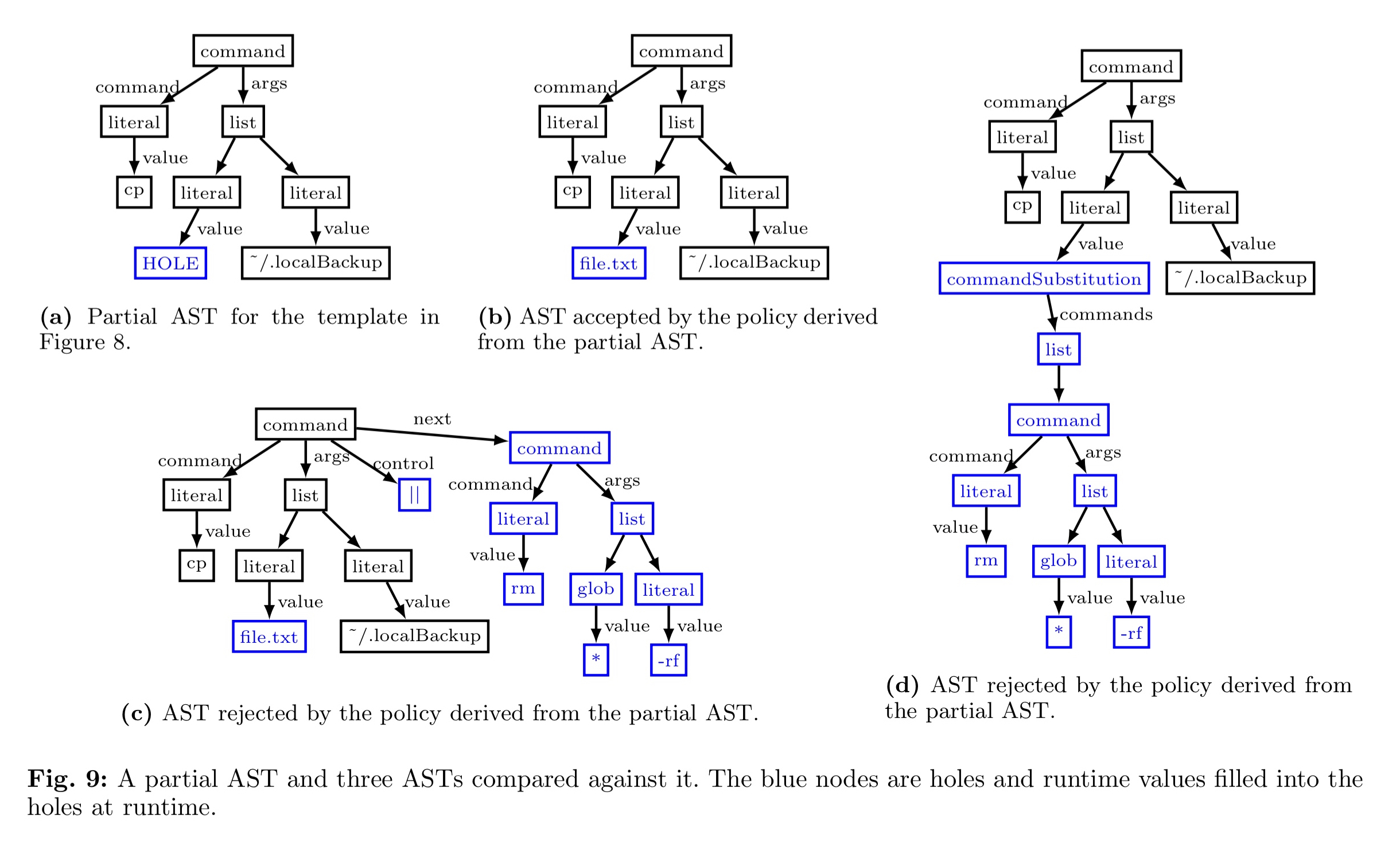 The mitigation technique is applied to all (at the time of the study) 15,604 node.js modules with at least one injection API call site.

To evaluate the runtime mechanism 24 vulnerable modules are exercised with benign and malicious inputs. The modules and injection vectors used are shown in the following table: 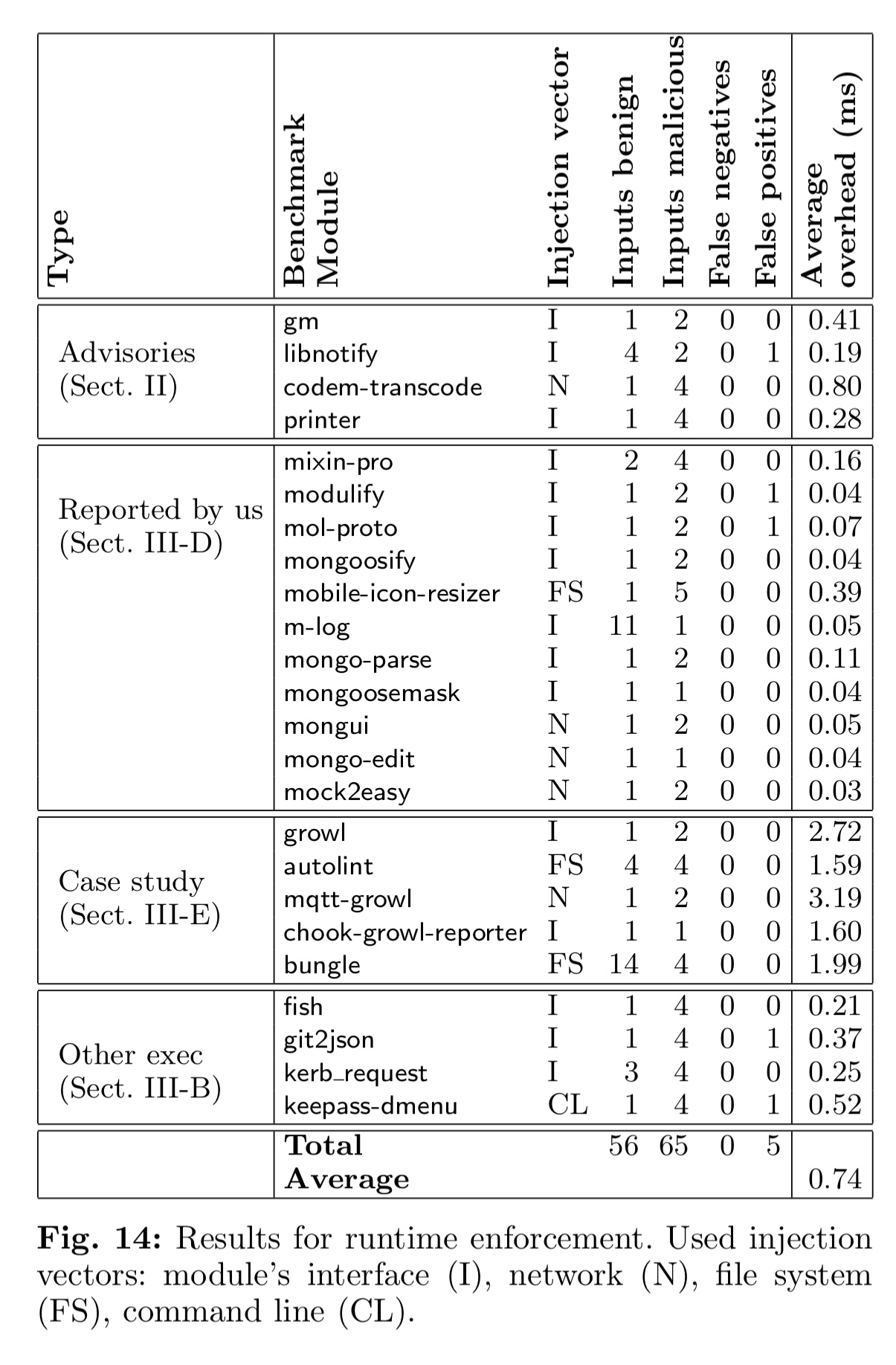 This results in 5 false positives (out of 56 benign inputs), which are caused by limitations of the static analysis (3/5) or node types outside of the safe set (2/5). There are no false negatives (undetected malicious inputs). The average runtime overhead for a call is 0.74ms.

In a broader scope, this work shows the urgent need for security tools targeted at Node.js. The technique presented in this paper is an important first step toward securing the increasingly important class of Node.js applications, and we hope it will inspire future work in this space.