The performance of Flash storage has benefited greatly from concurrency and parallelism – for example, multi-channel controllers, large caches, and deep command queues. At the same time, the time to program an individual Flash cell has stayed fairly static (and even become slightly worse in some cases). That’s ok until an application needs to guarantee ordering and/or durability of writes.

Enforcing a storage order is achieved by an extremely expensive approach: dispatching the following request only after the block associated with preceding request has been completely transferred to the storage device and made durable. We call this mechanism Transfer-and-Flush.

With transfer-and-flush, the parallelism and concurrency benefits are lost. As a consequence, on a single channel mobile storage SSD for smartphones, ordered writes offer only 20% of the performance (IOPS) of unordered writes. For a 32-channel Flash array, this ratio decreases to just 1%.

In today’s paper (which also won a best-paper award at FAST’18), the authors introduce a Barrier-enabled IO stack, which can enforce storage order between requests without the filesystem having to wait for a full transfer-and-flush. The headline performance gains certainly make you sit up and take notice:

SQLite performance increases by 270% and 75%, in server and in smartphone, respectively. In server storage BarrierFS brings performance gains of 43x and 73x in MySQL and SQLite respectively when compared to EXT4.

There’s some important fine-print in the headline numbers – the biggest gains come when ordering is preserved, but we don’t wait for durability. The baseline being compared against offers both.

Getting your ducks in order

The modern IO stack is said to be orderless…

Consider a set of writes issued in some order (issue order) by a file system:

The long standing assumption (a holdover from the physical characteristics of rotating disks) is that the host cannot control the persistence order.

The constraint that the host cannot control the persist order is a fundamental limitation in modern IO stack design.

To guarantee ordering in the face of this, an expensive transfer-on-flush mechanism is used. If a needs to be ordered before b, then after dispatching a to the storage device, the caller needs to wait for a to be serviced (the DMA transfer to complete) — wait-on-transfer. Then the caller can issue a flush command and wait for its completion (wait-on-flush). Only once the flush has returned can the caller dispatch b.

When ext4 (in its default Ordered mode) commits a journal transaction it uses two write requests: one for writing a coalesced chunk of journal descriptor block and log blocks (JD), and one for writing the commit block (JC). JD needs to be made durable before JC. Across transactions, ext4 also has to ensure that transactions are made durable in order. If either of these two ordering constraints are violated, the file system may recover incorrectly in the case of an unexpected failure.

The authors implement the barrier command concept using a new attribute REQ_BARRIER that can be set on a regular request object (to avoid the overhead of dispatching a dedicated command). For crash recovery they use a simple LFS style scheme. The actual implementation of the barrier command is not the main focus of the paper, it’s how the barrier command is used and the benefits it brings that the authors focus on. (“Developing a barrier-enabled SSD controller is an engineering exercise…”).

With the barrier command in hand, it is possible to implement order-preserving dispatch: 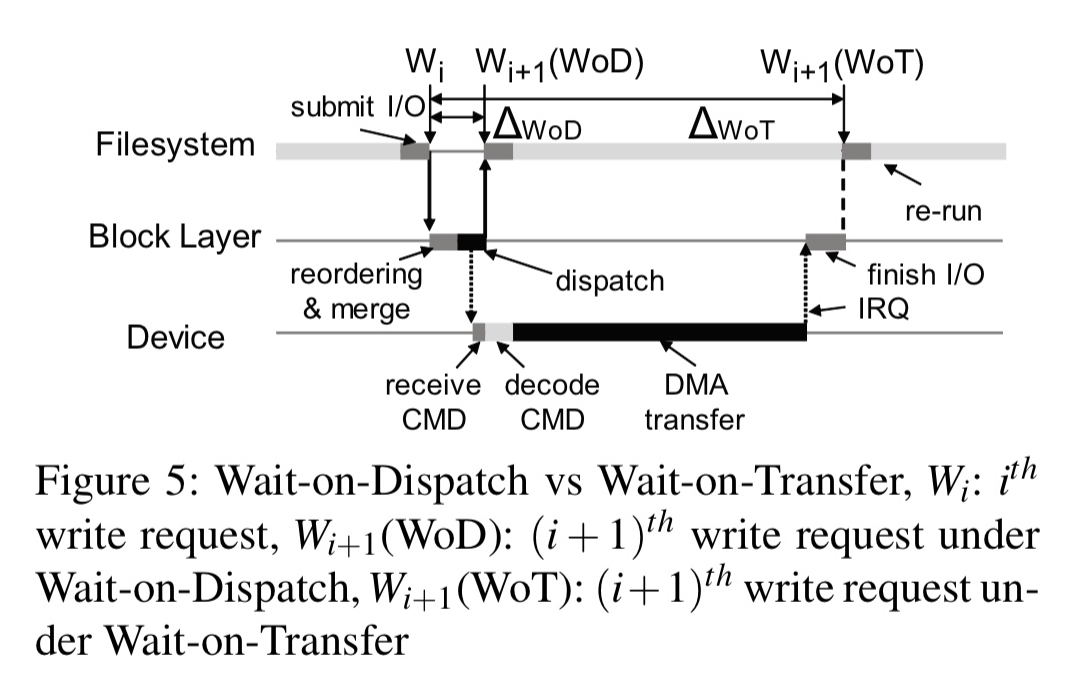 Epoch-based scheduling (with epochs delineated by barrier writes) ensures that:

The barrier-enabled IO stack adds two primitives, fbarrier() and fdatabarrier(), which synchronise the same set of blocks as fsync() and fdatasync() respectively, but return without ensuring the associated blocks become durable. I.e., they guarantee ordering but not durability. By interleaving write class with fdatabarrier an application can ensure that data blocks preceding the data barrier call are made durable ahead of data blocks that follow it. The authors modified ext4 to make it barrier enabled.

Exploiting the order-preserving nature of the underlying block device, we physically separate the control plane activity (dispatching the write requests) from the data plane activity (persisting the associated data blocks and journal transaction) of a journal commit operation. Further, we allocate separate threads to each task so that the two activities can proceed in parallel with minimum dependency. The two threads are known as the commit thread and the flush thread. We refer to this mechanism as Dual Mode Journaling.

Section 6 in the paper contains evaluations of the block device layer, and the filesystem layer, but I’m going to jump straight to the evaluation of what it means for applications running on top.

With SQLite BFS gives a 75% performance boost on mobile storage with full durability, and 2.8x with just ordering. With higher powered server-side controllers employing higher degrees of parallelism the BFS advantage goes up to 73x.

It is time to design a new IO stack for Flash storage that is free from the unnecessary constraint inherited from the old legacy that a host cannot control the persistence order…. the “cache barrier” command is a necessity rather than a luxury. It should be supported in all Flash storage products ranging from mobile storage to high-performance Flash storage with supercap.