In 2014, Facebook published their work on ‘The Mystery Machine,’ describing an approach to end-to-end performance tracing and analysis when you can’t assume a perfectly instrumented homogeneous environment. Three years on, and a new system, Canopy, has risen to take its place. Whereas the Mystery Machine took 2 hours to compute a model from 1.3M traces, Canopy can scale well beyond this.

Canopy has been deployed in production at Facebook for the past 2 years, where it generates and processes 1.3 billion traces per day spanning end-user devices, web servers, and backend services, and backs 129 performance datasets ranging from high-level end-to-end metrics to specific custom use cases.

Like the Mystery Machine, Canopy takes inspiration from the core ideas in e.g. X-Trace and Dapper, constructing and sampling performance traces by propagating identifiers through the system. In making this work within Facebook’s heterogeneous and fast-moving environment, three main challenges arose:

To address these challenges Canopy provides a complete pipeline for extracting performance data across the stack (browsers, mobile applications, and backend services), with customisation supported at each stage of the pipeline. Generated performance data is mapped to a flexible underlying event-based representation, and from this a high-level trace model is reconstructed in near real-time. The model is well suited to analysis and querying, and can extract user-specified features from traces.

Flexibility in the system at all levels is key:

… it is difficult to predict the information that will be useful or the steps engineers will take in their analysis. In practice at Facebook, successful approaches to diagnosing performance problems are usually based on human intuition: engineers develop and investigate hypotheses, drawing on different kinds of data presented in different ways: individual traces, aggregates across many traces, historical trends, filtered data and breakdowns, etc…. The goal of Canopy is to allow human-generated hypotheses to be tested and proved or disproved quickly, enabling rapid iteration.

Canopy by design does not promote a single first-class instrumentation API. With different execution models, third-party systems to integrate, multiple versions of core frameworks in use across different services, and so on this is an impossible dream. The underlying trace model is decoupled from instrumentation. 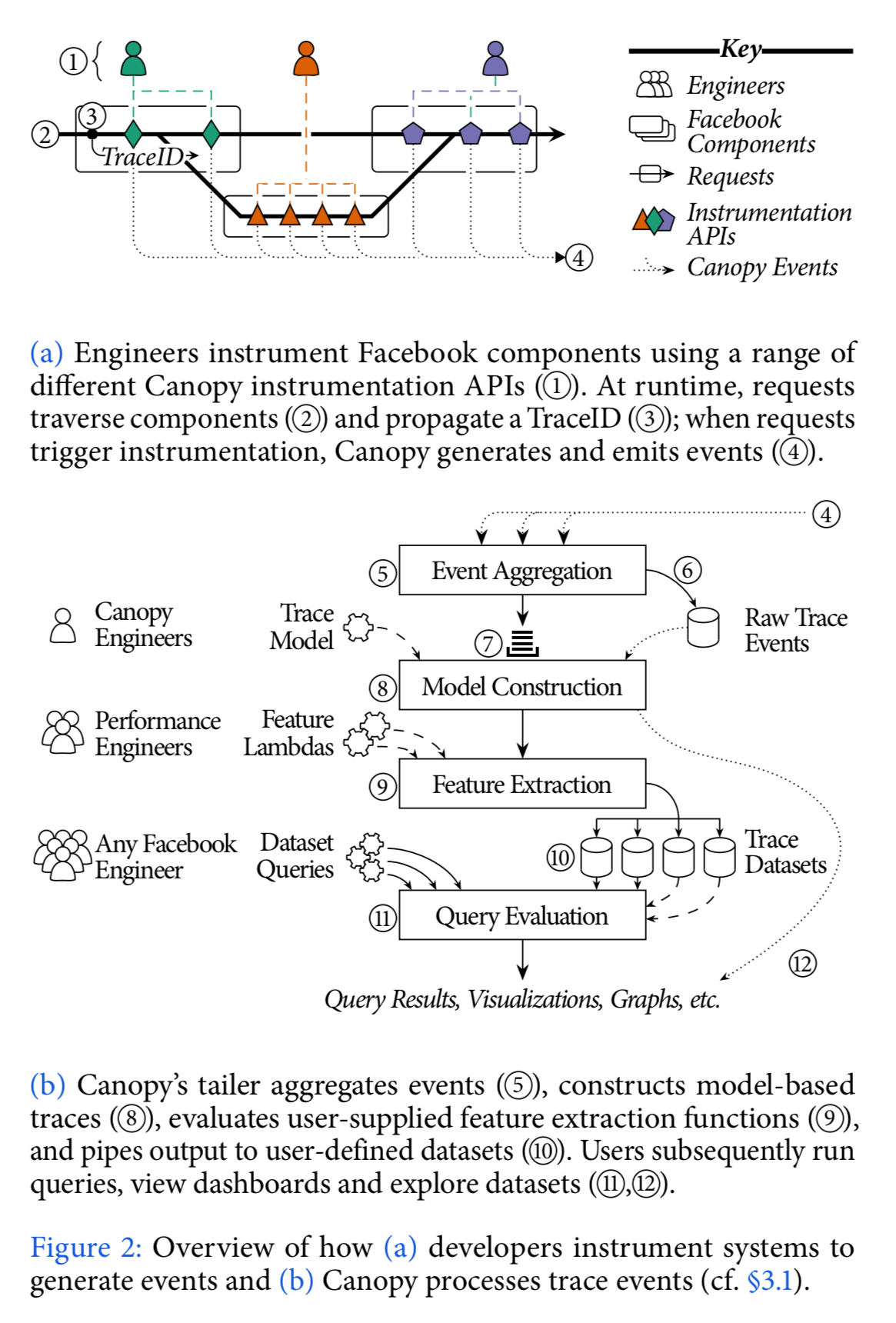 With reference to the numbers in the figure above,

Canopy currently generates and processes approximately 1.16Gb/s of event data. The Scribe event delivery system can scale several orders of magnitude beyond this, and Canopy uses just a small fraction of the overall capacity of Facebook’s Scribe infrastructure.

Canopy in action and lessons learned

Canopy provides multiple different visualisations to engineers, as can be seen in the figure below:

The following sequence of charts illustrate the use of Canopy to discover the cause of 300ms regression in page load time for a particular page. 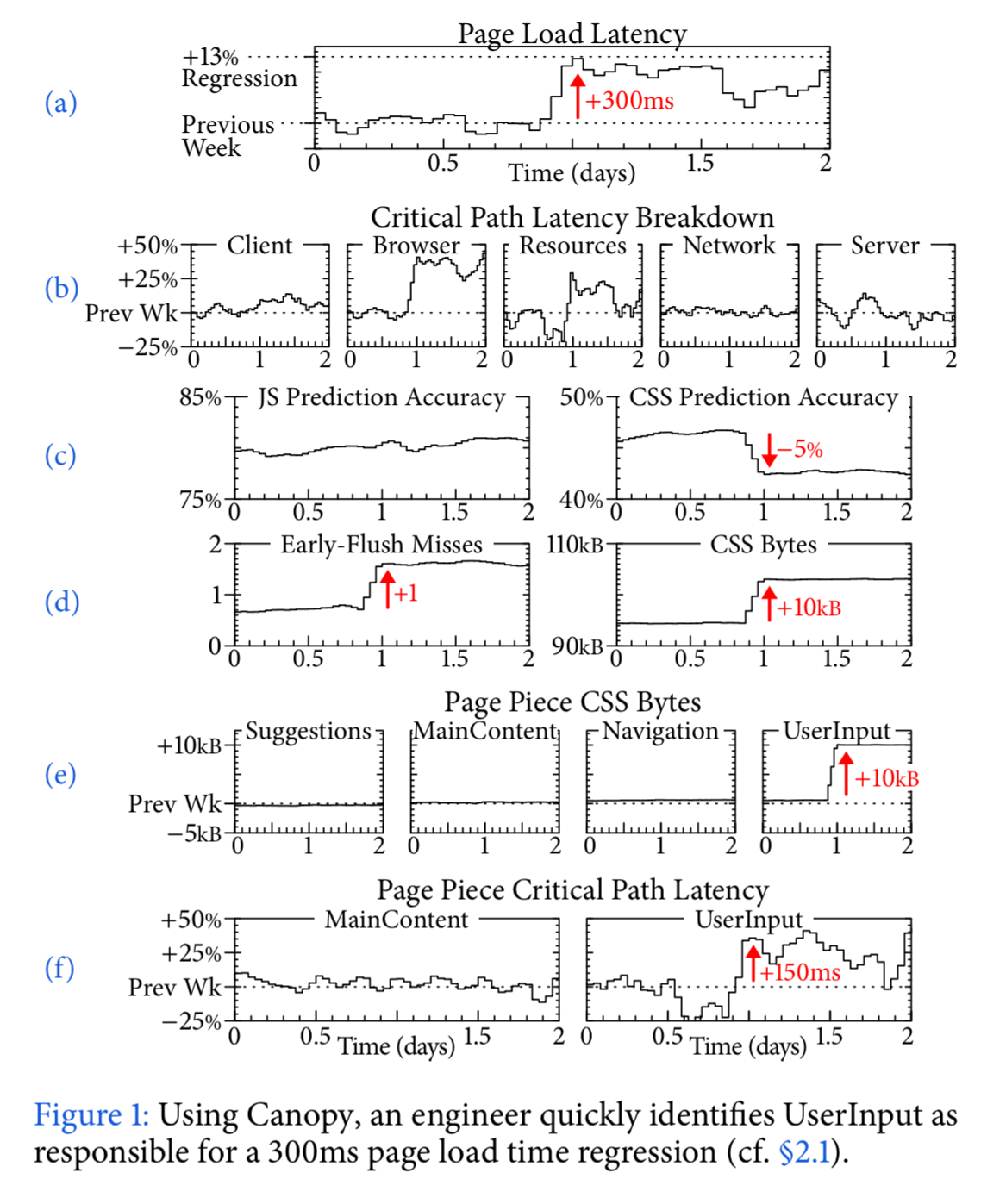 In (a) the jump in latency is clearly seen. At step (b) the latency is broken down into its constituent parts, revealing browser execution time and resource fetching time (CSS, JS, etc.) as the possible culprits. Diagnosing the change in resource loading time is made possible by drilling into the resource prediction accuracy (c) (server side determination of the resources necessary for initial page display), which showed a 5% drop in CSS prediction accuracy. In (d) we can see that an extra 10kB of CSS is being sent, and this is taking the place of useful resources forcing clients to wait. At step (e), it is possible to drill into the individual page components, revealing the UserInput component is the cause of the CSS bytes increase. This increases time on the critical path in the client (f). The problem was fixed by reconfiguring the early flush mechanism.

Over time, the trace model used by Canopy has evolved. It began with a block-based RPC model analogous to Dapper’s spans, including client-send (CS), client-receive (CR), server-send (SS) and server-receive (SR) events. “However, we were unable to express more fine-grained dependencies within services, such as time blocked waiting for the RPC response.” The second model — (b) in the figure below — introduced execution units.

This model was still insufficient to capture the wait time between receiving and processing an RPC response, and so client-queue (CQ) events were added to the model — (c) and (d) in the figure above.

As Canopy became more widely used, and encountered a wider range of patterns (one-away, multi-response, streaming, pub-sub, and so on) the model’s representation of RPCs was finally decoupled into sets of edges, where an edge is a one-way communication between any two blocks — (e) in the figure above.

Although we no longer require the four event types of the initial model, the existing instrumentation is still compatible with each revision of the model, as they simply translate to a pair of edges in the current model.

You’ll find more experiences and lessons learned in section 6 of the paper.