As an antidote to callback-hell, ECMAScript 6 introduces Promises. Promises represent the value of an asynchronous computation, and the functions resolve and reject are used to settle the promise. Promises can be chained using then.

However, the semantics of JavaScript promises are quite complex, and since the feature is implemented by way of ordinary function calls, there are no static checks to ensure correct usage. As a result, programmers often make mistakes in promise-based code that leads to pernicious errors, as is evident from many reported issues on forums such as StackOverflow.

This paper introduces the notion of a promise graph, which can be used to visualise the flow in a promises-based program and help to detect a range of bugs. In order to have formal basis for such reasoning and program analysis the paper also introduces

, a calculus for the behaviour of promises, which is expressed as an extension to

A promise is an object that represents the result of an asynchronous operation.

The then function can be used to register resolve reactions and reject reactions with promises, and creates in turn a dependent promise with the result computed by the resolve (reject) reaction.

Section 3 of the paper defines a formal

calculus for all of this. The runtime state has five components:

A promisify expression in this language turns an object into a promise. Then there a bunch of reduction rules such as this one:

They can look a bit intimidating on first glance, but that’s mostly down to the syntax. For example, all this one says is that:

The fun part of the paper for me though, is what happens when you create promise graphs off of the back of this formalism. So let’s get straight into that…

The promise graph captures control- and dataflow in a promise-based program to represent the flow of values through promises, the execution of fulfil and reject reactions, and the dependencies between reactions and promises.

There are four different types of edges between nodes as well:

In the examples that follow, the subscript numbers (e.g.,

indicate the line number in the program on which the corresponding object is declared. At this point on first read I admit to thinking it would be easier just to read the code, but bear with me, it will all make more sense very soon.

Here’s a small example of a program and its corresponding promise graph:

. You can also read it backwards to trace the resolution of

to understand how and why it was resolved.

Here’s an example with branching:

Here’s some code from a StackOverflow question (Q42408234) and it’s corresponding promise graph. The poster had spend a full two hours trying to figure out why the promise from mongoose.find (on line 15) was returning undefined. 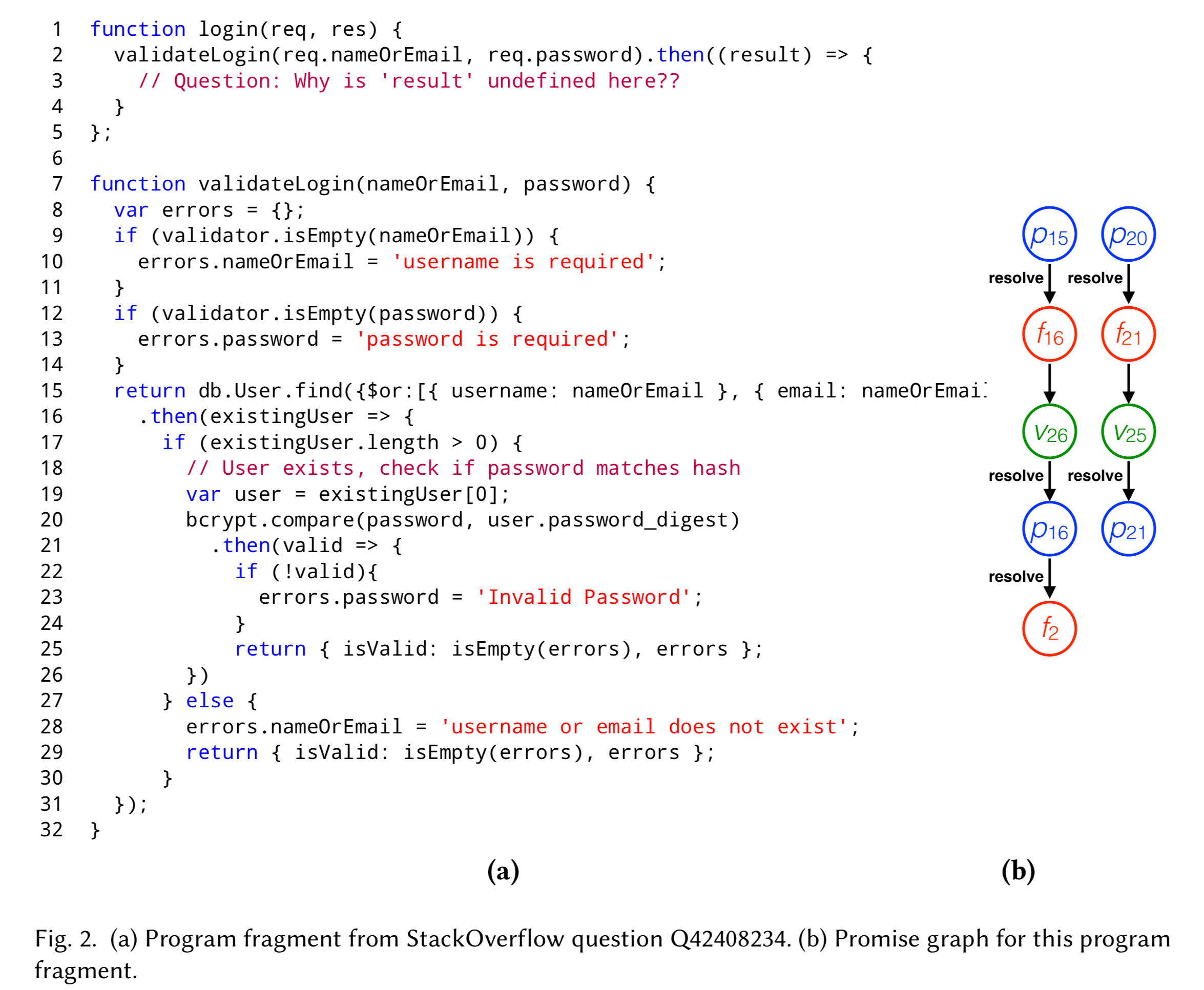 Immediately the promise graph shows us two disconnected chains. The value returned on line 25 is used to resolve the promise on line 21, but then doesn’t go anywhere else. The function declared on lines 16-31 does not explicity return a value, so it will implicitly return undefined. The fix is to explicitly return the the value of bcrypt.compare as computed on line 20.

A catalog of Promise-related bugs

Armed with the ability to create promise graphs, we can now detected a variety of promise-related bugs.

The authors looked at the most recent 600 StackOverflow questions tagged with both promise and javascript (out of over 5,000 total). They focused on those with code fragments of at most 100 lines, a genuine promises-related issue, and an answer. This boiled things down to quite a small list, show below: 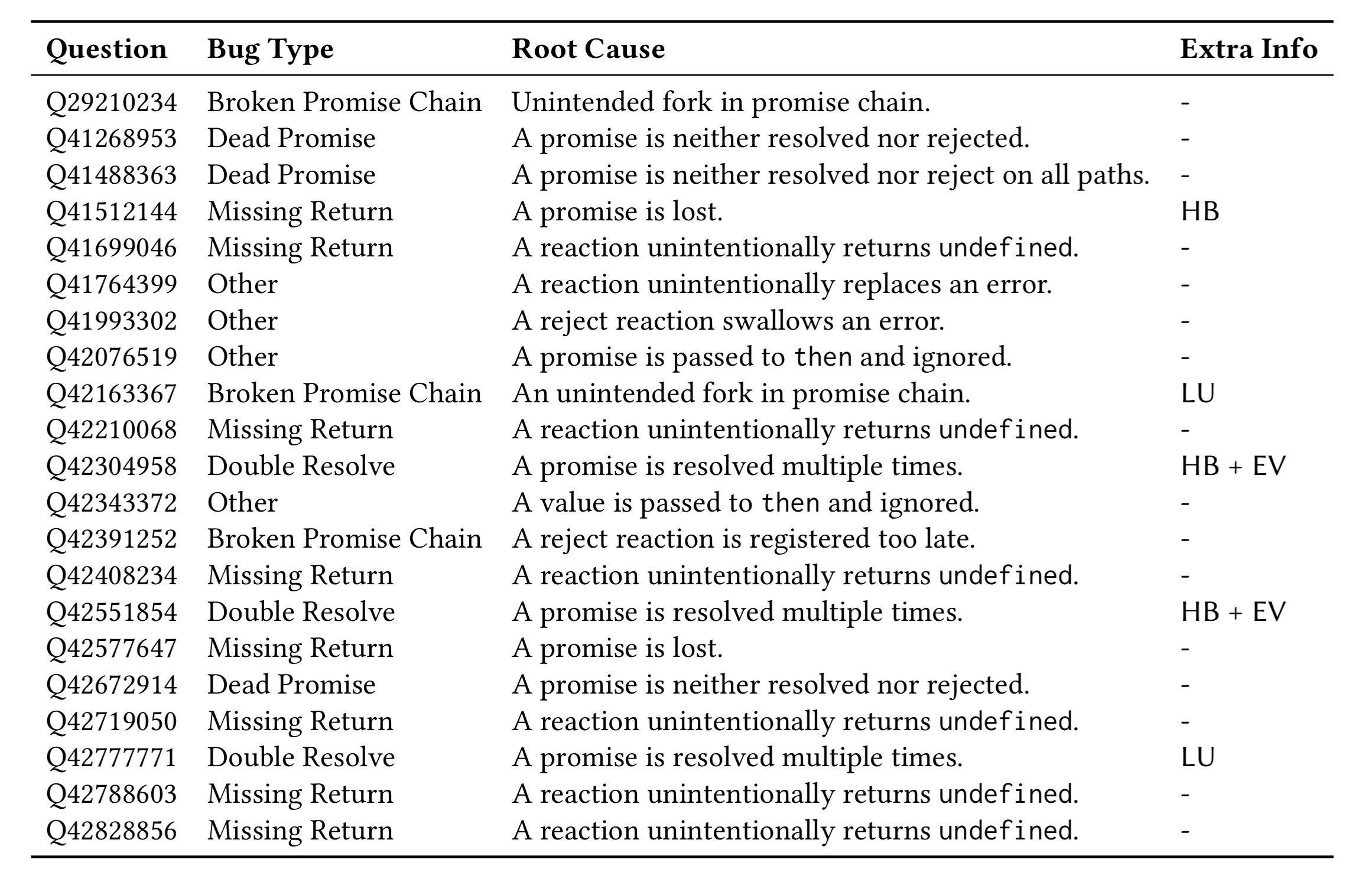 The fourth column in the table above shows the additional information — above and beyond the promise graph — that was needed to pinpoint the bug (if any).

Q41268953. The programmer creates a promise, but never resolves or rejects it. As a result, the reactions associated with the promise are never executed. The programmer gets lost in the details and mistakenly believes the bug to be elsewhere in the program. He or she then proceeds to add additional logging and reject reactions in all the wrong places and these are never executed. In this scenario, the promise graph immediately identifies that the initial promise in the promise chain is never resolved or rejected, and hence that no reaction on chain is ever executed.

There are plenty more examples in section 5.3, and in appendix A.