This paper won the 10-year most influential paper award at OOPSLA this year. Many of the papers we look at on this blog include some kind of performance evaluation. As Georges et al., show, without good experimental design and statistical rigour it can be hard to draw any firm conclusions, and worse you may reach misleading or incorrect conclusions! The paper is set in the context of Java performance evaluation, but the lessons apply much more broadly.

Benchmarking is at the heart of experimental computer science research and development… As such, it is absolutely crucial to have a rigorous benchmarking methodology. A non-rigorous methodology may skew the overall picture, and may even lead to incorrect conclusions. And this may drive research and development in a non-productive direction, or may lead to a non-optimal product brought to market.

… a performance evaluation methodology needs to adequately deal with the non-determinism in the experimental setup… Prevalent data analysis approaches for dealing with non-determinism are not statistically rigorous enough.

Common at the time of publication (it would be interesting to do a similar assessment of more recent papers) was a method whereby a number of performance runs – e.g. 30 – would be done, and the best performance number (smallest execution time) reported. This was in accordance with SPECjvm98 reporting rules for example. Here’s an example of doing this for five different garbage collectors. 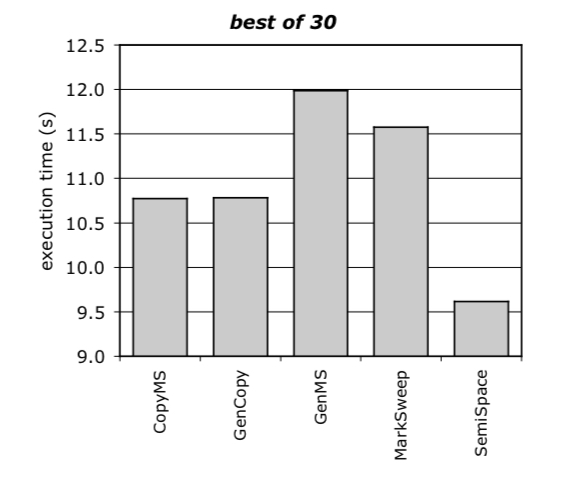 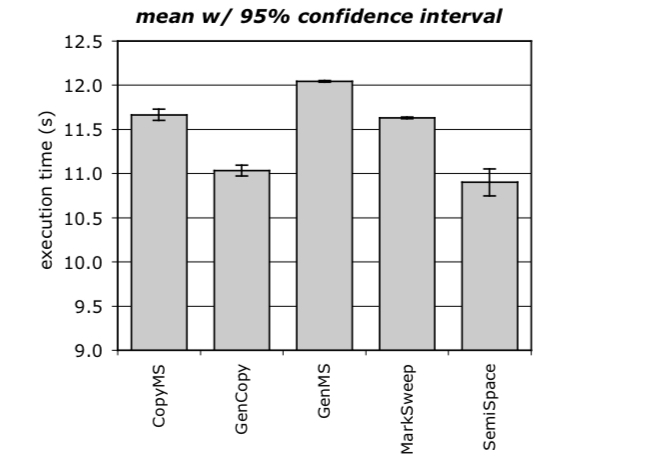 Now we see that GenCopy significantly outperforms CopyMS, and that SemiSpace and GenCopy have overlapping confidence intervals – the difference between them could be simply due to random performance variations in the system under measurement.

After surveying 50 Java performance papers the authors conclude that there is little consensus on what methodology to use. Table 1 below summarises some of the methodologies used in those papers: 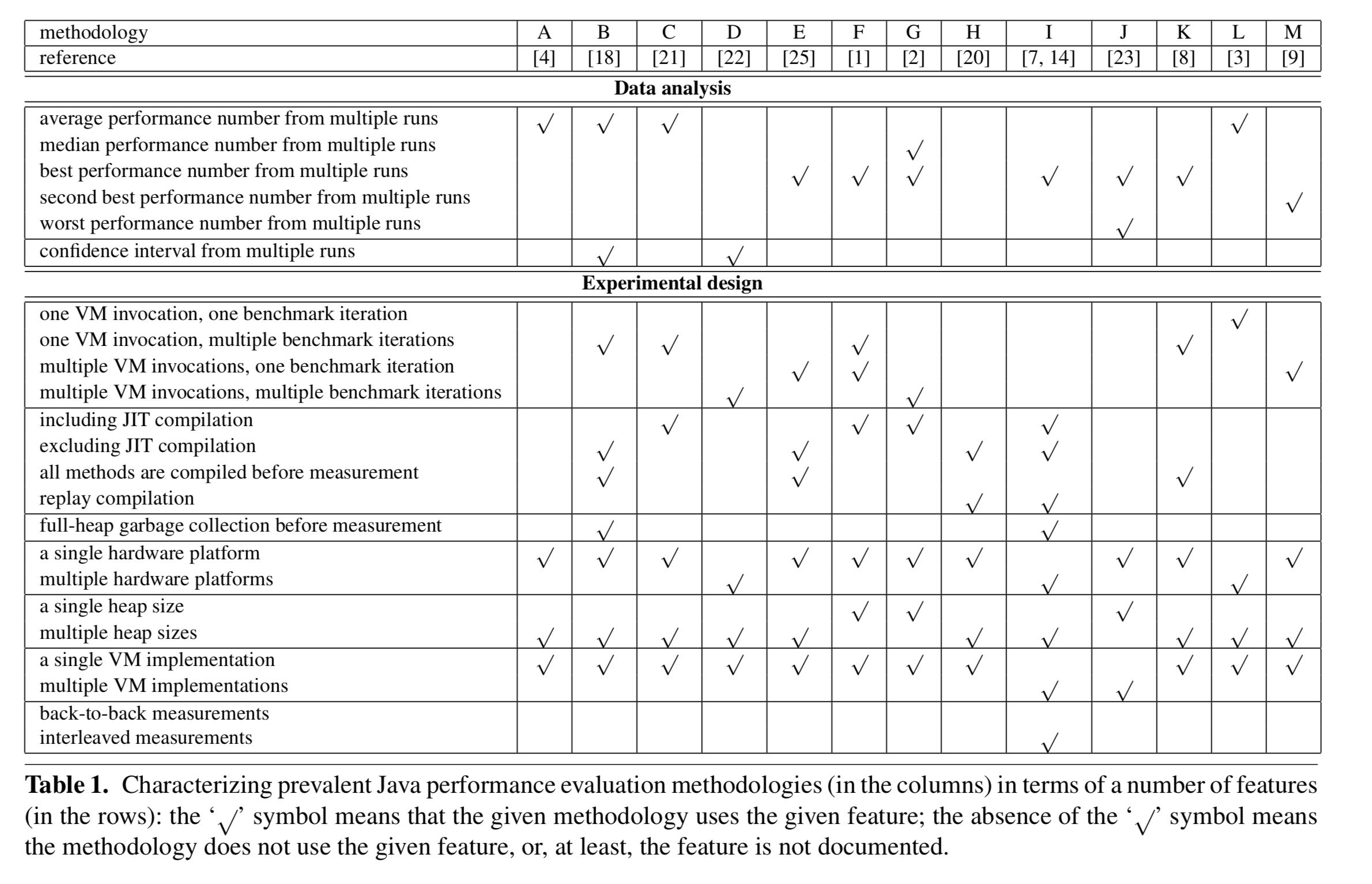 Suppose you use a non-rigorous methodology and report a single number such as best, average, worst etc., out of a set of runs. In a pairwise comparison, you might say there was a meaningful performance difference if the delta between the two systems was greater than some threshold

. Alternatively, using a statistically rigorous methodology and reporting confidence intervals, it may be that you see:

This leads to six different cases – in only one of which can you truly rely on the results from the non-rigorous approach:

The authors run a series of tests and find that all prevalent methods can be misleading in a substantial fraction of comparisons between alternatives – up to 16%. Incorrect conclusions even occur in up to 3% of comparisons. (And if you really must report a single number, mean and median do better than best, second best, or worst). 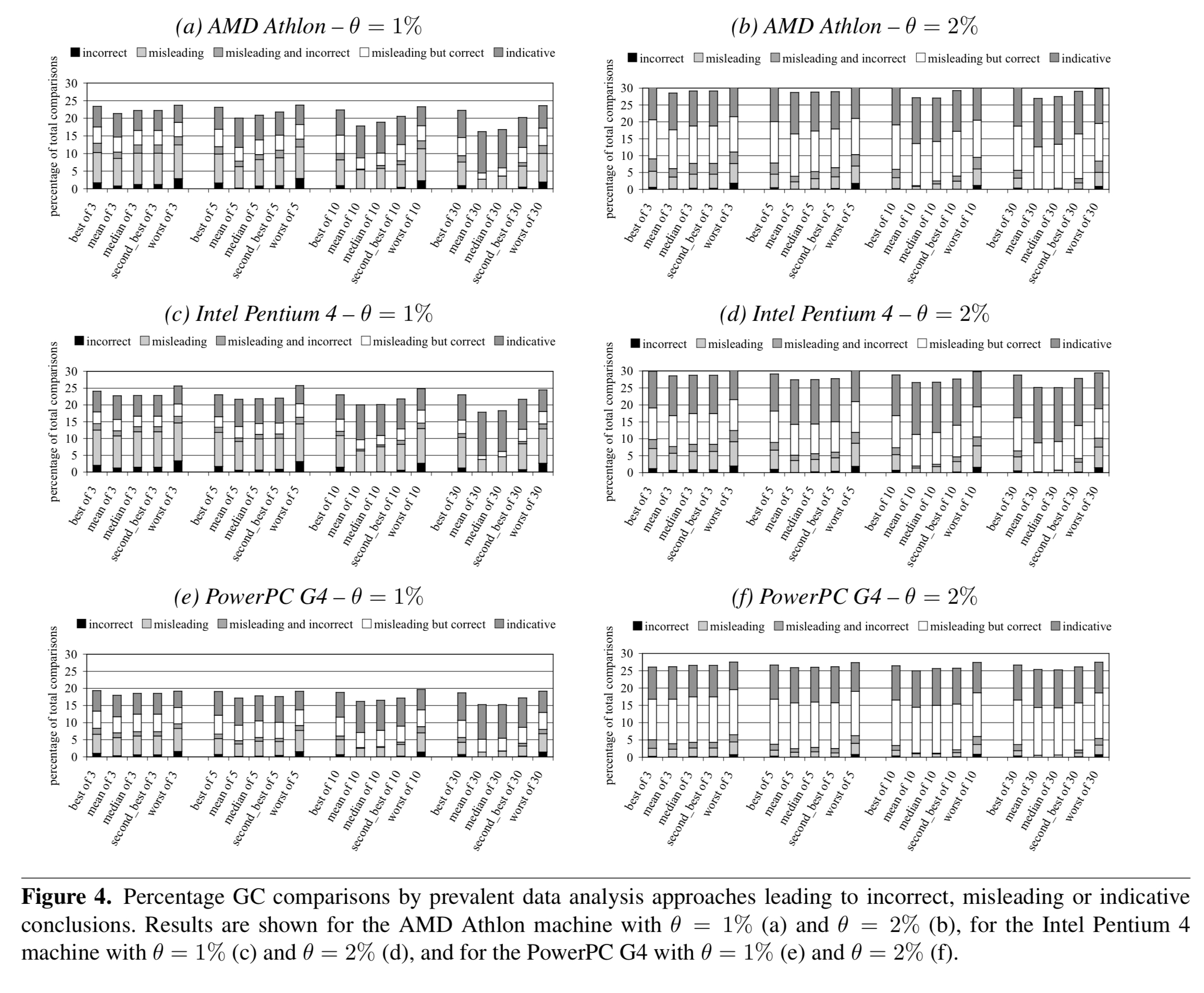 There are many more examples in section 6 of the paper.

Statistics to the rescue

We advocate adding statistical rigor to performance evaluation studies of managed runtime system, and in particular Java systems. The motivation for statistically rigorous data analysis is that statistics, and in particular confidence intervals, enable one to determine whether differences observed in measurements are due to random fluctuations in the measurements or due to actual differences in the alternatives compared against each other.

Section 3 in the paper is my favourite part, and it essentially consists of a mini-stats tutorial for people doing benchmarks.

If we could get an exact repeatable number out of every performance run, life would be much more straightforward. Unfortunately we can’t do that due to non-determinism (‘random errors’) in the process. So we need to control for perturbing events unrelated to what the experiment is trying to measure. As a first step, the authors recommend discarding extreme outliers. With that done, we want to compute a confidence interval.

In each experiment, a number of samples is taken from an underlying population. A confidence interval for the mean derived from these samples then quantifies the range of values that have a given probability of including the actual population mean.

is defined such that the probability of

is the significance level and

is the confidence level.

Ideally we would take at least 30 samples such that we can build upon the central limit theorem. With a target significance level

chosen in advance, we can then determine

is the standard deviation of the sample,

is obtained from a pre-computed table.

provides a good estimate of the actual variance

… This is generally the case for experiments with a large number of samples, e.g.,

. However, for a relatively small number of samples, which is typically assumed to mean

can be significantly different from the actual variance

In this case, we can use Student’s t-distribution instead and compute the interval as:

is typically obtained from a pre-computed table. As the number of measurements

The paper shows the formula for computing a confidence interval for the difference of two means (see section 3.3). If this interval includes zero, we can conclude, at the confidence level chosen, that there is no statistically significant difference between the two alternatives.

If we want to compare more than two alternatives, then we can use a technique called Analysis of Variance (ANOVA).

The ANOVO test doesn’t tell which of the alternatives the statistically significant difference is between, if there is one! The Tukey HSD (Honestly Significantly Different) test can be used for this.

Using the more complex analyses, such as multi-factor ANOVA and MANOVA, raises two concerns. First, their output is often non-intuitive and in many cases hard to understand without deep background in statistics. Second, as mentioned before, doing all the measurements required as input to the analyses can be very time-consuming up to the point where it becomes intractable.

Section 4 of the paper therefore introduces a practical yet still statistically rigorous set of recommendations for Java performance evaluation.

We’ll be talking more about the notion of ‘steady-state’ tomorrow – especially with micro-benchmarks.

For more on critically reading evaluation sections in papers in general, see “The truth, the whole truth, and nothing but the truth: a pragmatic guide to assessing empirical evaluations.”