“A Rail of One’s Own” – Creating Spaces for Women in IT Laugwitz, GenderIT 2014

I had the good fortune of chatting with Laura Laugwitz over breakfast on my last day before leaving the GOTO Copenhagen conference. She studied both anthropology and computer science, which must be a pretty rare but very interesting combination! “A Rail of One’s Own” (the title is a pun on Virginia Woolf’s “A Room of One’s Own”) is her paper from 2014 examining the workings of Rails Girls Berlin from an anthropological perspective. At the core of the paper is a discussion of the impact an environment (or ‘space’) can have on participants. If you’re looking to create a diverse, inclusive work environment, there’s plenty to think about here.

Rails Girls began in Finland in 2010 and has since spread all round the world. The main goal of the program is to get women excited about web development, and to give them “the vocabulary and the tools to become creative within the field.” In the Rails Girls Berlin chapter the organising team is women-only, but coaches are of any gender (as of 2014, about two thirds identified as male). The Rails Girls brand includes posters, balloons, and stickers used to decorate meeting spaces for events.

The importance of space

The modernistic association of technology with masculinity translates into everyday experiences of gender, historical narratives, employment practices, education, the design of new technologies, and the distribution of power across a global society in which technology is seen as the driving force of progress — Bray, F. Gender and Technology, in Annual Review of Anthropology, 36 (2007), 37-53

Within the field of programming, power relations are not only attached to gender, they also include matters of language, accessibility, age, financial background, race, ethnicity and so forth. A space can be an important factor when thinking about power relations.

Following sociological theories, I understand space as something that is created through people, goods, and interactions. Social and material worlds cannot be separated when thinking about space.

A space has both physical and mental aspects:

The physical aspects of the spaces that Rails Girls Berlin creates can be directly observed. To understand the synthesised aspects, Laugwitz conducted a series of interviews with participants. 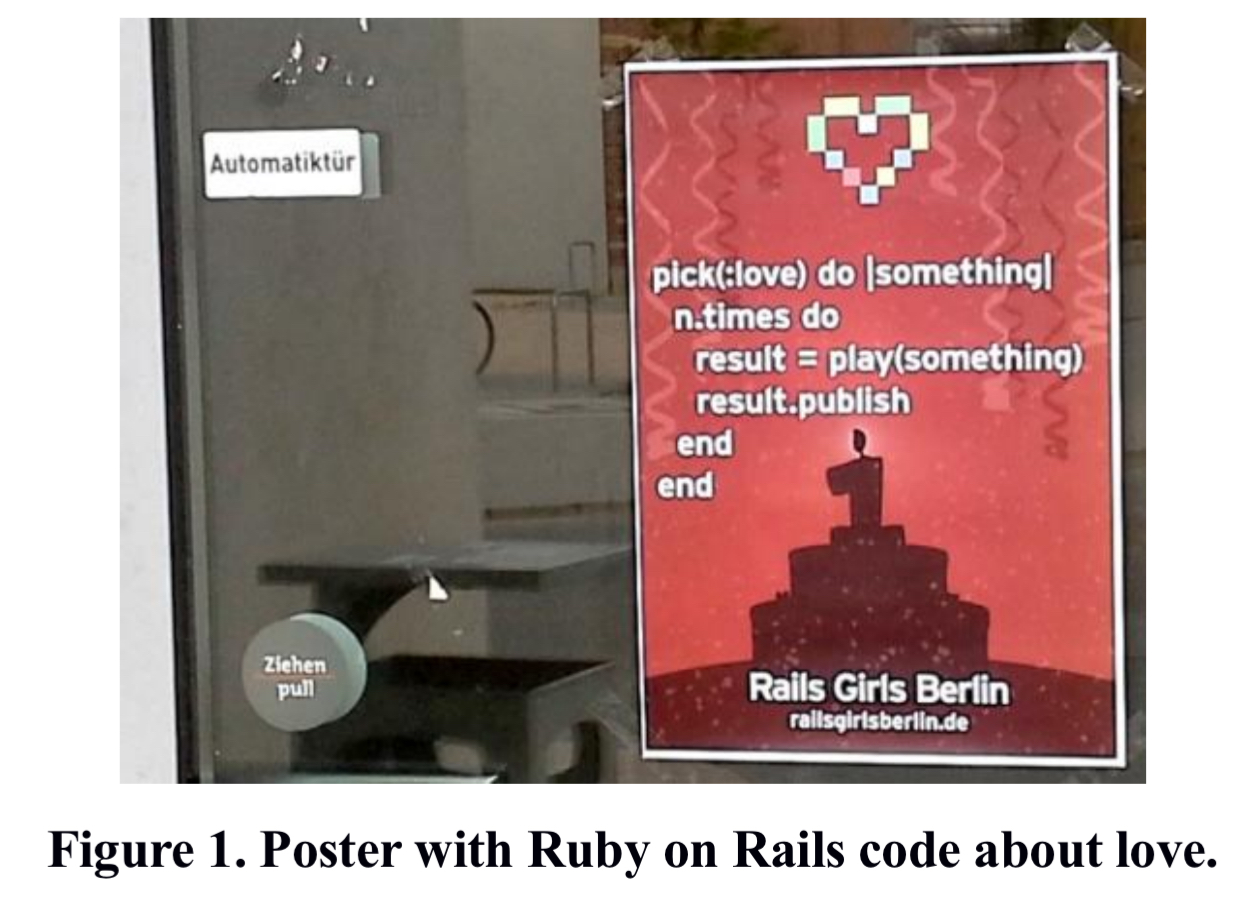 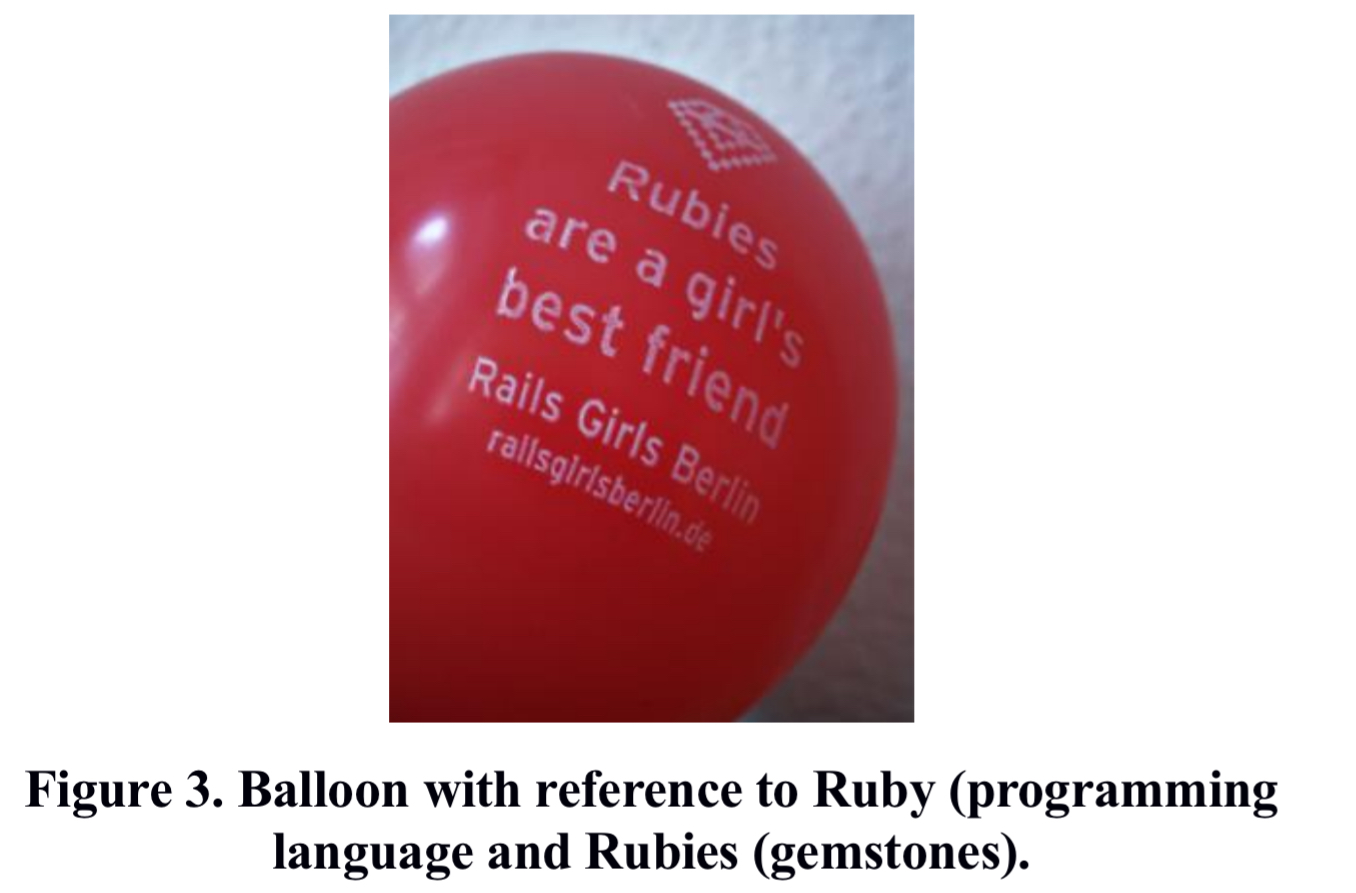 These items join programming-related statements with female-connotated imagery.. This strategy actively challenges conservative ideas about how programming is a male area. As participants described, it also adds to an atmosphere of playfulness and coziness which then creates a positive learning environment.

Some other aspects of the space though might not be so helpful: laptop stickers and t-shirts worn by coaches already into tech-related subjects, for example, often refer to tools, jokes or narratives unknown to those new to the field. And laptops brought by some students were often visibly expensive, which can also make other attendees uncomfortable.

As one participant expressed it:

“There is this thing about space. When you’re in a room and you’re visibly, or feeling like, you’re the only person like you, it changes the way you interact or how comfortable you feel. Race has a lot to do with it, having a fast laptop, wheel-chair accessibility…”

What message is your working environment sending?

Through the interviews, it emerged that those affiliated with Rails Girls Berlin identify four concepts that are important: creativity, happiness, community, and support. Community and support we talk about reasonably often, creativity, and especially happiness, not so much. These concepts are repeatedly referred to during Rails Girls evens, forming a narrative that participants value highly.

Each is connected to the others, meaning that they also account for each other: supporting members of the community through creative ideas causes happiness; an easy-to-read programming framework like Ruby-on-Rails makes programmers happy and gives them more time to be creative, and so on. Interestingly enough, these are not concepts that are traditionally associated with programming and they are also concepts that are not necessarily associated with masculinity.

(Although as one interviewee noted, a lot of men would enjoy something like this too!).

There still remains room for improvement though: Rails Girl Berlin workshops remain predominantly white, able-bodied, english-speaking, and middle-class. Access for privileged women is easier than for those who are less privileged. “Therefore, Rails Girls Berlin can only partially be described as empowering.”

Efforts have been made to be more inclusive, e.g., by trying to collect older laptops that could be offered to applicants who don’t own a laptop…