This paper is an investigation into the causes of synchronisation-related performance issues in concurrent systems, together with a pair of tools that can help to detect and diagnose them. The main SyncPerf detection tool is very lightweight (average overhead 2.3%). It detects performance issues, and the information it provides is also enough to diagnose some of them. When the diagnostic information provided by the detection tool is not enough, the SyncPerf diagnostic tool can be used to make a deeper investigation. This tool has higher overhead (3.5x-9.9x), but is still considerably lower than similar tools – excessive performance overhead is avoided by only investigating the critical sections highlighted by the detection tool.

Over and above the tools, the analysis of performance related issues is of interest in its own right.

This work addresses performance issues related to synchronisation primitives such as locks, conditional variables, and barriers. Lock-free / wait-free techniques, transactional memory and so on are out of scope. In scope however, are performance problems outside of the usual hotspot of frequently acquired and highly contended locks.

Our first observation is that performance problems can also occur with locks that are not excessively acquired or highly contended.

There’s even a handy four-quadrant diagram to hammer home the point: 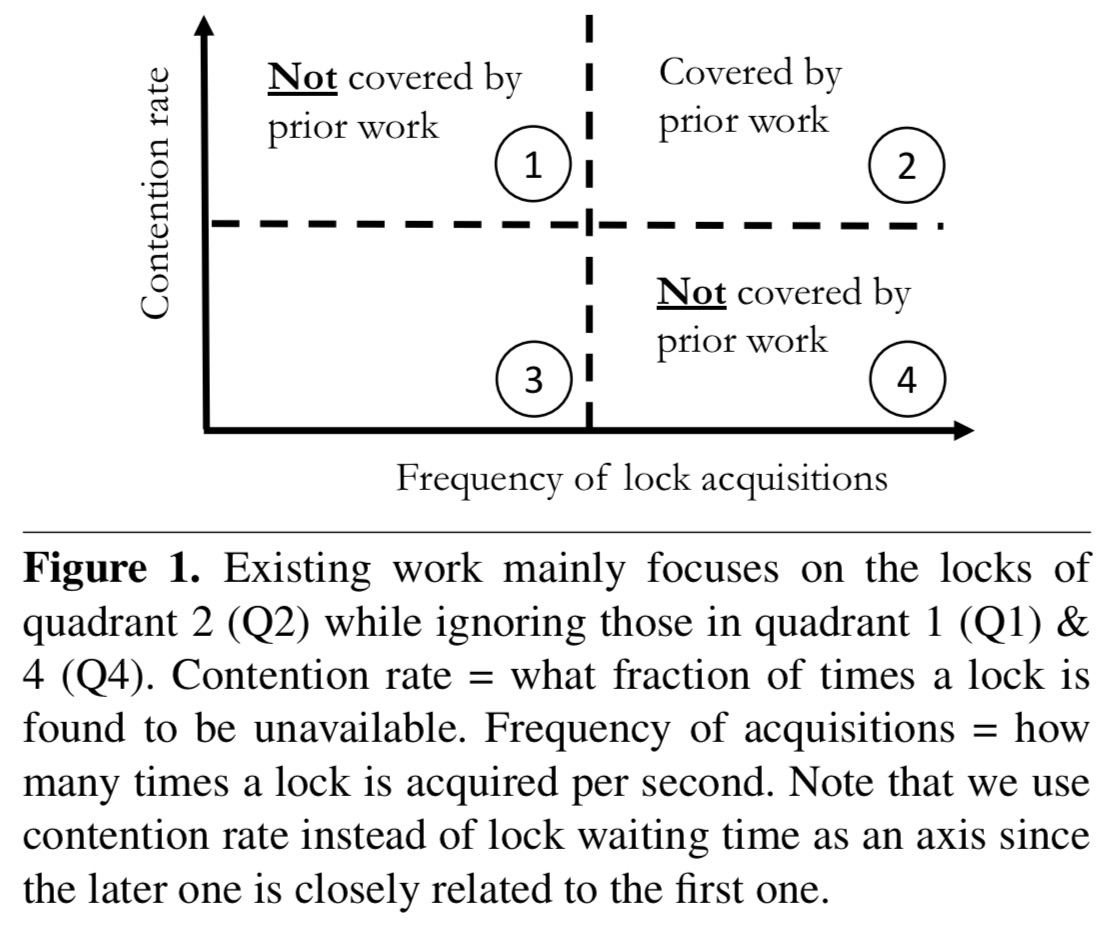 If we put the focus on performance issues, rather than prior publications, the quadrant looks something like this: 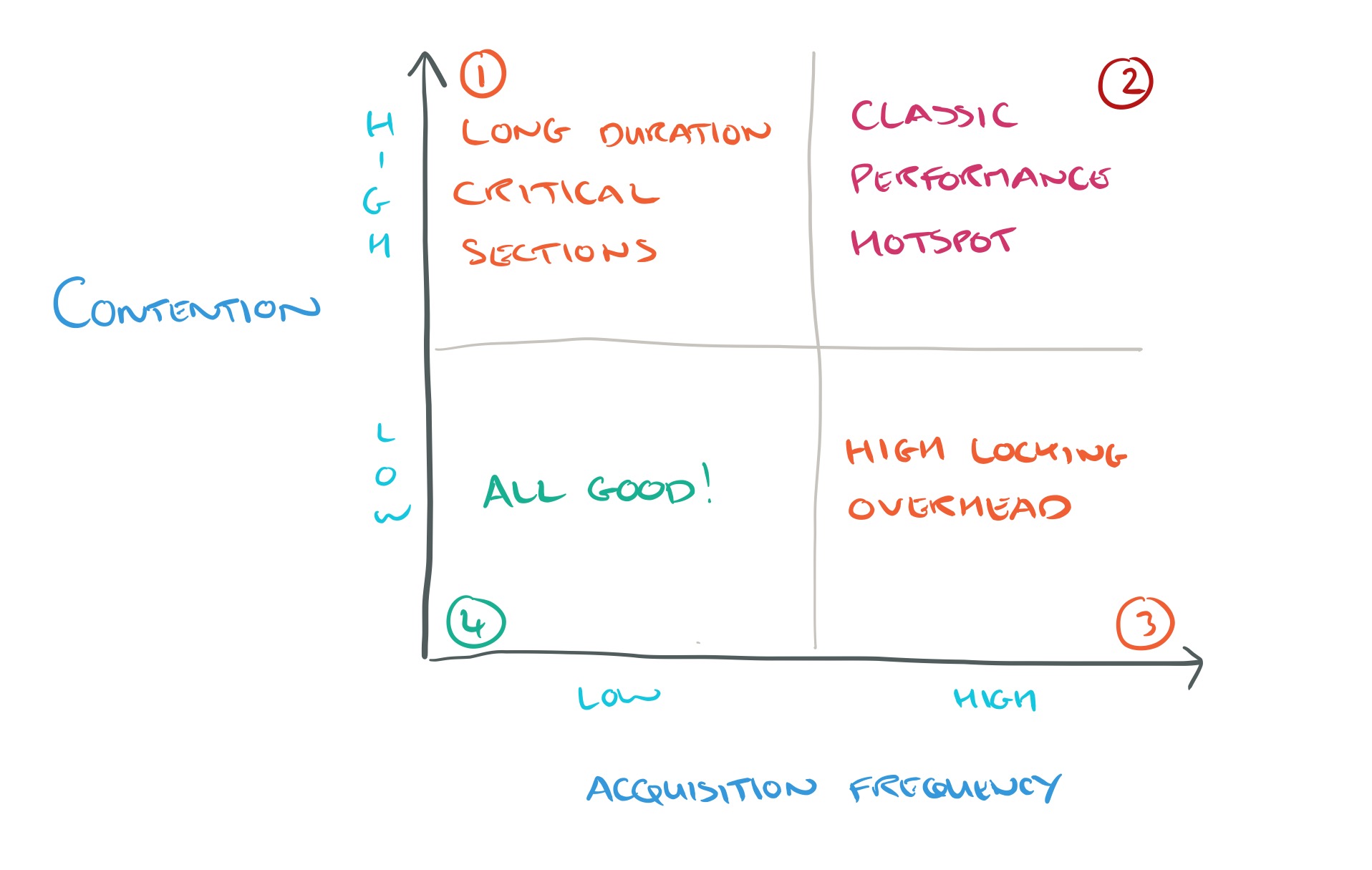 Of course it wouldn’t matter that prior work didn’t cover quadrants 1 and 4 if they turned out to be uninteresting. What we see in the evaluation though, is that these are fruitful quadrants for seeking out performance improvements.

Our second observation is that it is not always sufficient to identify root causes of a problem based on the behavior of a single synchronization.

For example, there may be a collection of locks protecting a data structure, and these need to be considered together.

Let’s now look at the five classes of performance issues identified by the authors:

ferret searches images for similarity. ferret has four different stages that perform image segmentation, feature extraction, indexing, and ranking separately. By default, ferret creates the same number of threads for different stages. SyncPerf detects that different types of threads have a completely different waiting time, such as 4754ms, 5666ms, 4831ms, and 34ms respectively. This clearly indicates that some stages may not have enough threads and others may have too many threads. SyncPerf predicts the best assignment to be (1-0.2-2.5-12.2). Thus either (1-1-3-11) or (1-1-2-12) can be an optimal distribution. We experimented with all possible assignments and found the best assignment to be (1-1-3-11). Using the suggested task assignment (1-1-3-11) improves the performance of ferret by 42%.

If we overlay that on the quadrant diagram, we get something like this: 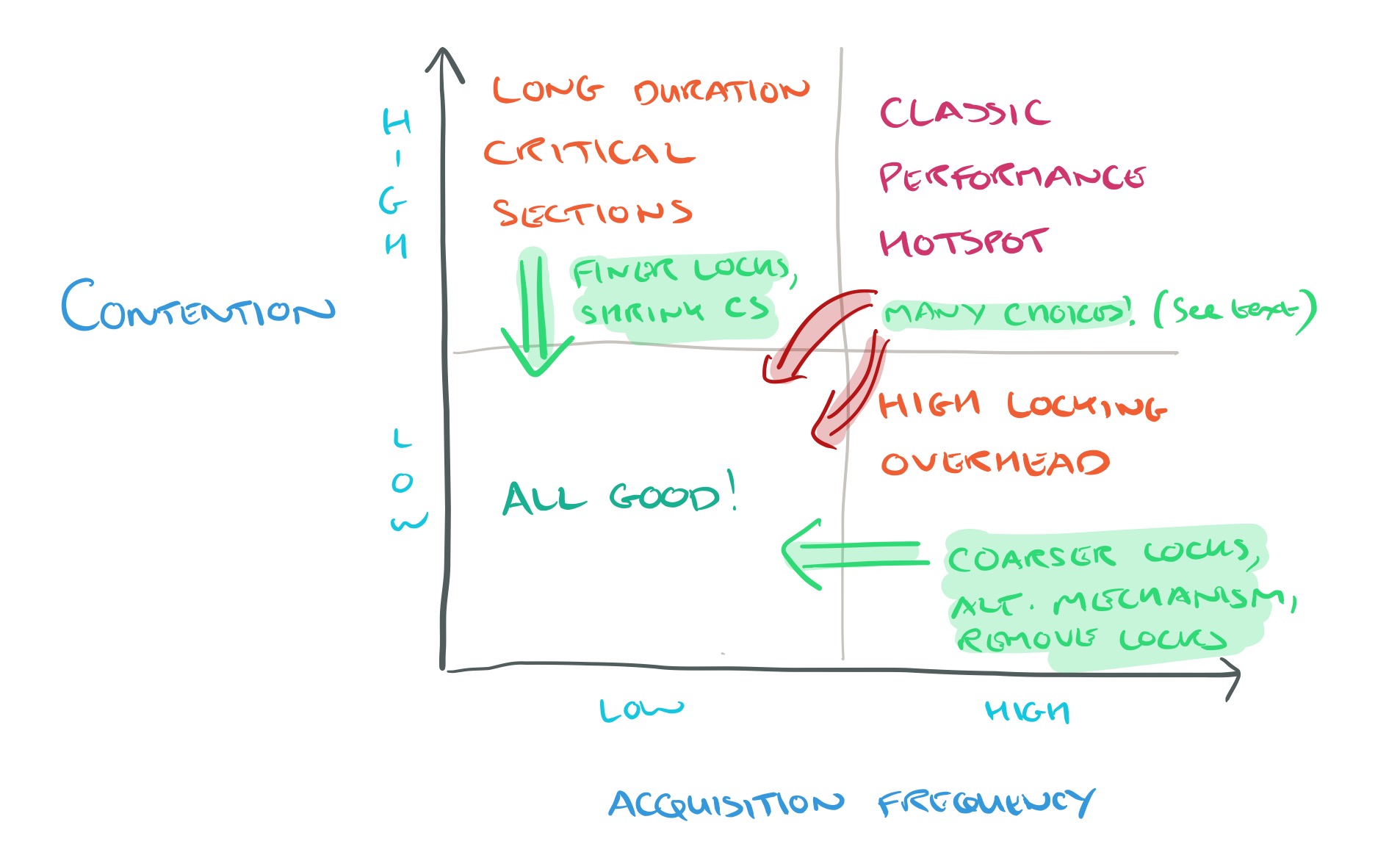 SyncPerf provides two tools to assist programmers in identifying bugs and fixing them: a detection tool and a diagnosis tool. By combining these two tools, SyncPerf not only answers “what” and “where” questions, but also “why” and “how to fix” (partially) questions for most synchronization related performance bugs.

SyncPerf takes your program, instruments it with very low overhead (see section 3.1 for details), and investigates locks inside quadrants 1, 2 and 4 as well as lack failure rates and load imbalances. Initial results are presented to the programmer, which may be sufficient to determine the appropriate solution (e.g., consult the table above). If more detail is needed, the diagnosis tool can be run.

I contacted the authors to see if there’s a version somewhere you can get your hands on, and I’m pleased to say that SyncPerf is now available at https://github.com/mejbah/SyncPerf. Many thanks to the team for making this available.

SyncPerf was evaluated on a 16 core machine using the PARSEC benchmark suite, as well at Apache, MySQL, and Memcached.

Five of the fifteen bugs fall into the previously unexplored fourth quadrant! For example, SyncPerf finds that the g_timer_skiplist_mtx mutex in Apache has a high acquisition frequency (49,607 per second) with almost 0% contention rate. Replacing pthread_mutex_lock with pthread_spinlock results in a 7.8% performance improvement!

The canneal application provides an example of a quadrant two performance bug: seed_lock is acquired only 15 times, but the contention rate is around 86%. SyncPerf’s diagnosis tool showed that of 46,979 instructions inside the critical section, only 28 instructions access a shared variable. It turned out an entire random number generator routine was inside the critical section. Moving it outside, as per the patch below, resulted in a 4% performance improvement.

Section 4.4 of the paper contains discussions of several more of the performance bugs found by SyncPerf. It’s worth reading to gain a deeper appreciation of common problems and their solutions.