We’re straying a little bit out of The Morning Paper comfort zone again this morning to look at one of the key hardware issues affecting the design of IoT devices: how much energy they use, and the related question of their peak power requirements. Why is this interesting? Firstly, there are way more ultra-low power (ULP) based devices out there than you might imagine. And secondly, since we can’t accurately gauge the energy and peak-power requirements, we tend to over provision, leading to larger, heavier systems than we could otherwise build. Cherupalli et al. demonstrate a technique that gives much more accurate estimates of peak power and energy requirements, with tighter bounds. By understanding these requirements in detail, the results can also be used to guide optimisations that reduce power usage. We’ll get to all that soon, but first we need to dig a little deeper into the world of ULP devices.

The world of ultra-low power processors

What’s the most widely deployed type of processor in the world? It’s not the processors that power our PCs and laptops of course, nor is it even the processors you’ll find in mobile phones.

Ultra-low power (ULP) processors have rapidly become the most abundant type of processor in production today.

This is driven by new and emerging power- and energy- constrained applications such as IoT, wearables, implantables (I didn’t know that was a word!), and sensor networks. ULPs are projected to continue being the most widely deployed type of processor in the future.

… applications will continue to rely on simple single-core ultra-low power processors, powered by batteries and energy harvesting, and will have even tighter peak power and energy constraints than the ULP systems of today.

In the world of ULPs, power is everything. There are three basic types of systems depending on the source(s) of power:

It’s the size of the energy harvesting and/or energy storage (battery) components that ultimately determine the form factor, size, and weight of an ULP-based device. For example: 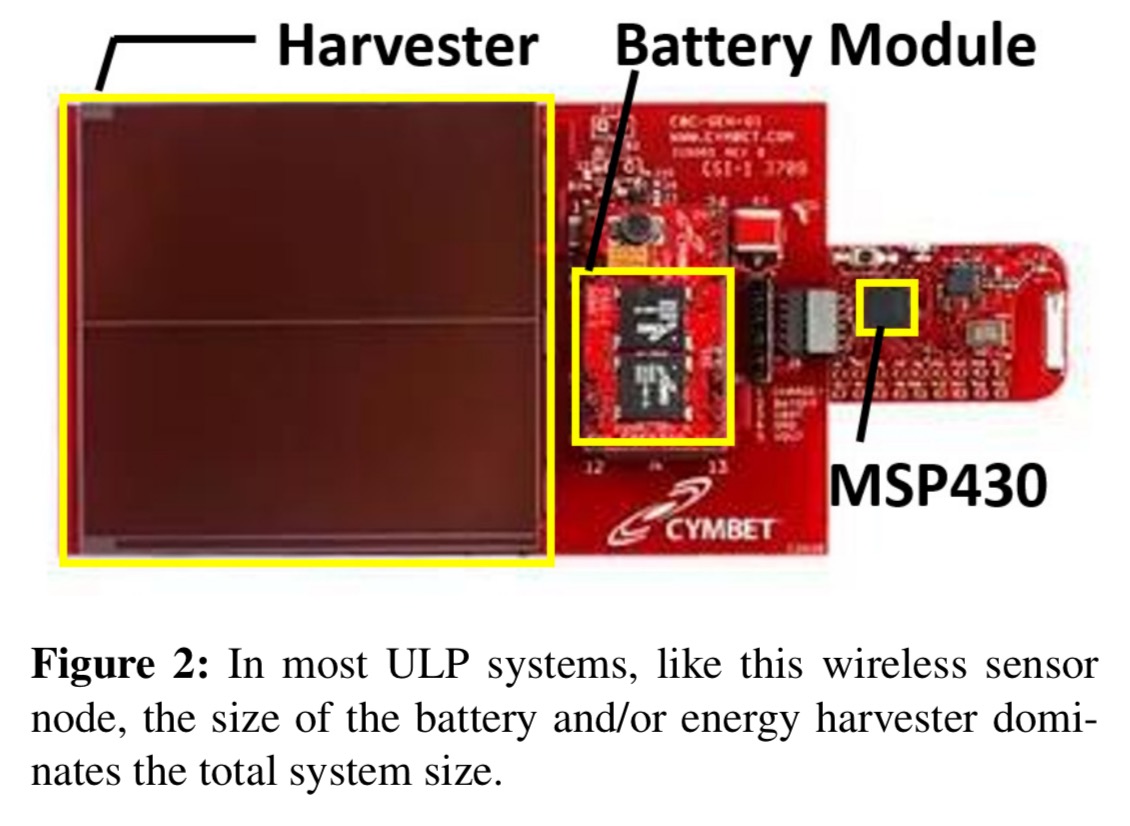 Peak power and energy consumption impact harvester and battery size calculations in different ways depending on the type of device: 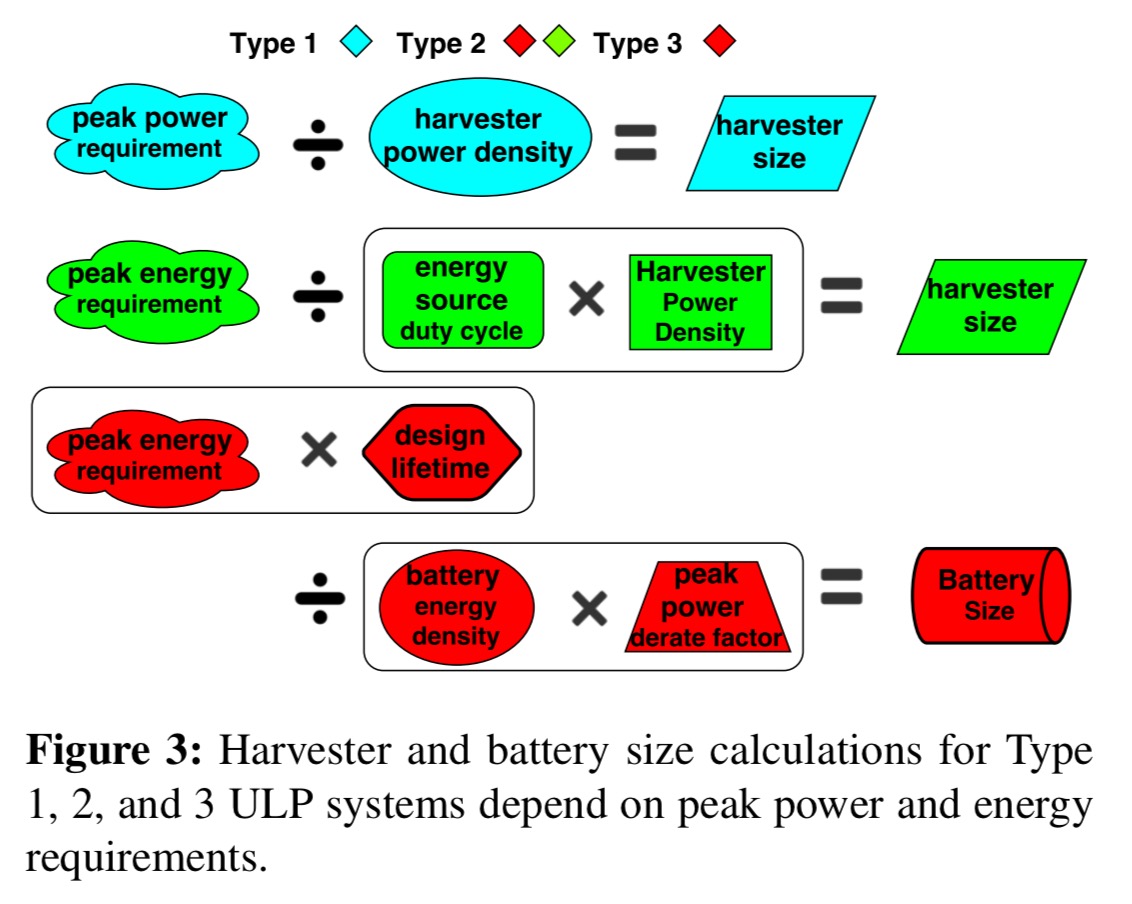 There are three basic approaches for determining the peak power and energy requirements of a ULP processor for a given application.

A bit more work, but #3 sounds like an obviously good idea. So what’s the catch?

Things tend not to work out well if a processor does try to operate outside of the peak power and energy bounds available to it, so best practice is to add a guardband (power buffer) to any profiling-based results. A typical guardbanding factor might be 33%. In other words, take the profiling results, add 33%, and provision for that.

The core idea is to run a symbolic simulation of an application binary on ‘the gate-level netlist of a processor.’ (What is a netlist?). Most ULP systems tend to have simple processors and applications, making simulation feasible. For example, even the most complex benchmark analysed in the paper completed full simulation in 2 hours.

During the simulation, a special ‘X’ value is propagated for all signal values that can’t be constrained based on the application. We start with all gates and memory locations not explicitly loaded with the binary set to X. Any input values during simulation are also set to X.

As simulation progresses, the simulator dynamically constructs an execution tree describing all possible execution paths through the application. If an X symbol propagates to the inputs of the program counter (PC) during simulation, indicating an input-dependent control sequence, a branch is created in the execution tree. Normally, the simulator pushes the state corresponding to one execution path onto a stack for later analysis and continues down the other path.

At the end of this process we know the activity of each gate at each point in the execution tree. A gate that is not marked as toggled (0 to 1, or 1 to 0) at a particular location in the tree can never be toggled at that location in the application. We can use this knowledge encoded in the execution tree to generate peak power requirements as follows: 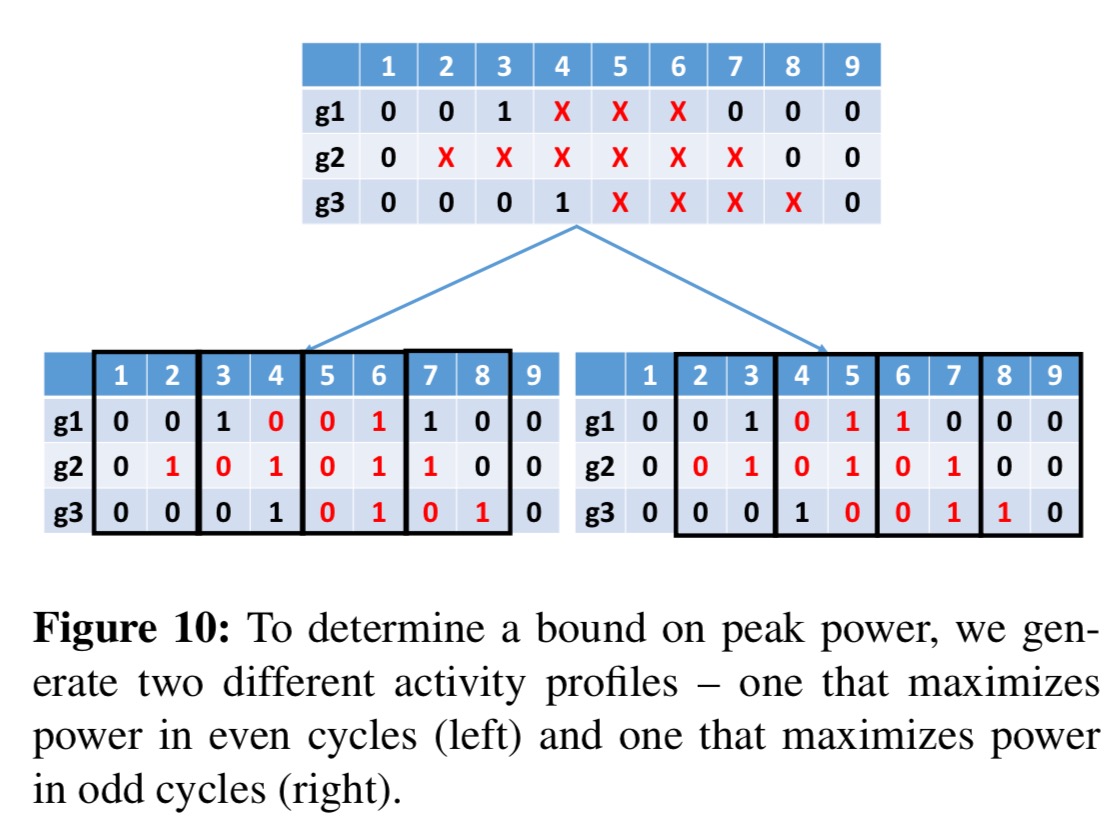 The peak power trace can be used to generate peak energy requirements.

… the peak energy of an application is bounded by the execution path with the highest sum of per-cycle peak power multiplied by the clock period.

When making this calculation, for input-dependent branches the algorithm always take the most expensive one. For loops where the maximum number of iterations can be determined simply take the energy for one iteration and multiply it by that max. “If neither is possible, it may not be possible to compute the peak energy of the application; however, this is uncommon in embedded applications.”

The chart below shows the peak power requirements determined using the above process as compared to the conventional techniques for determining peak power. 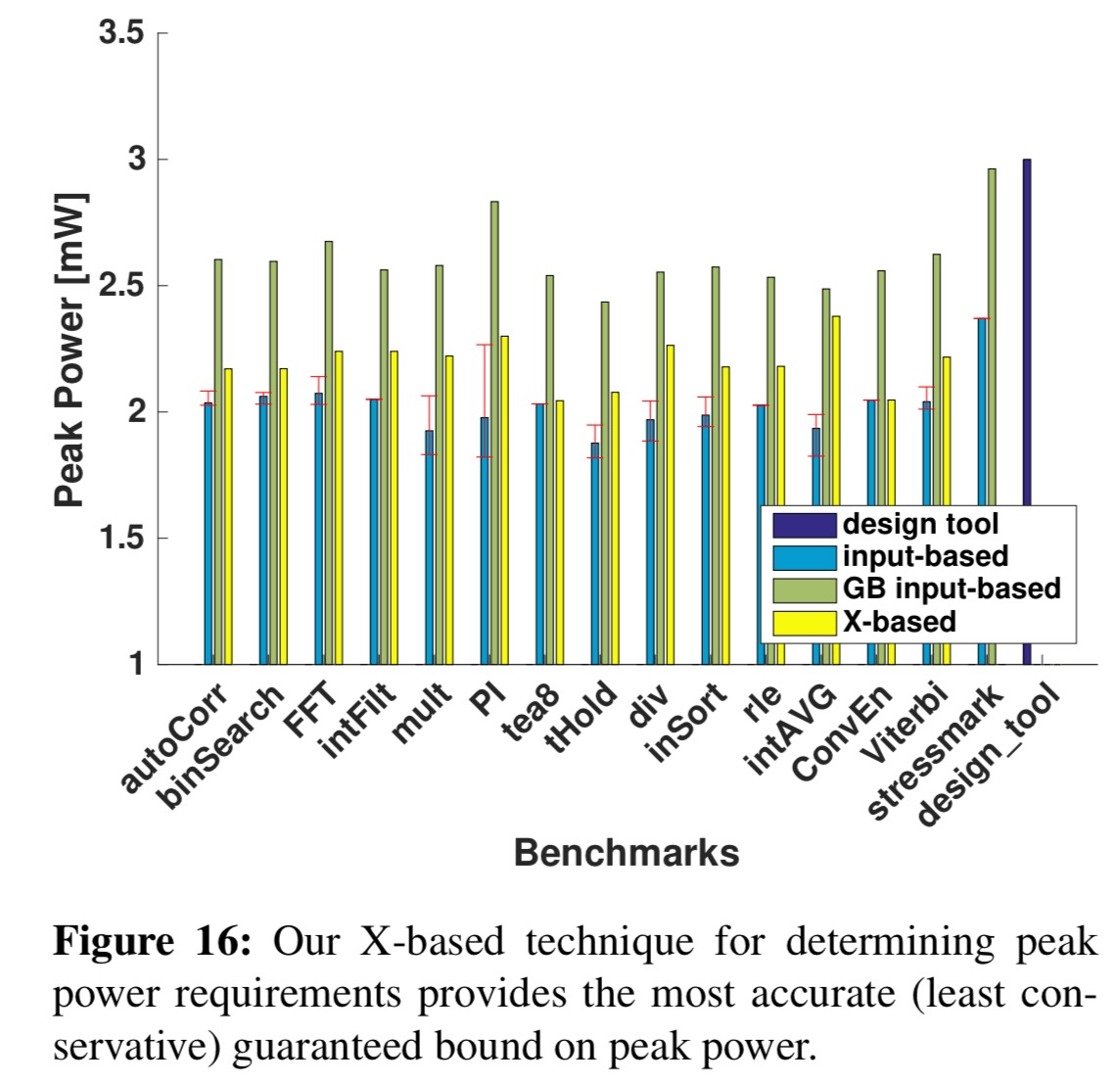 Here are the results of the peak energy calculations: 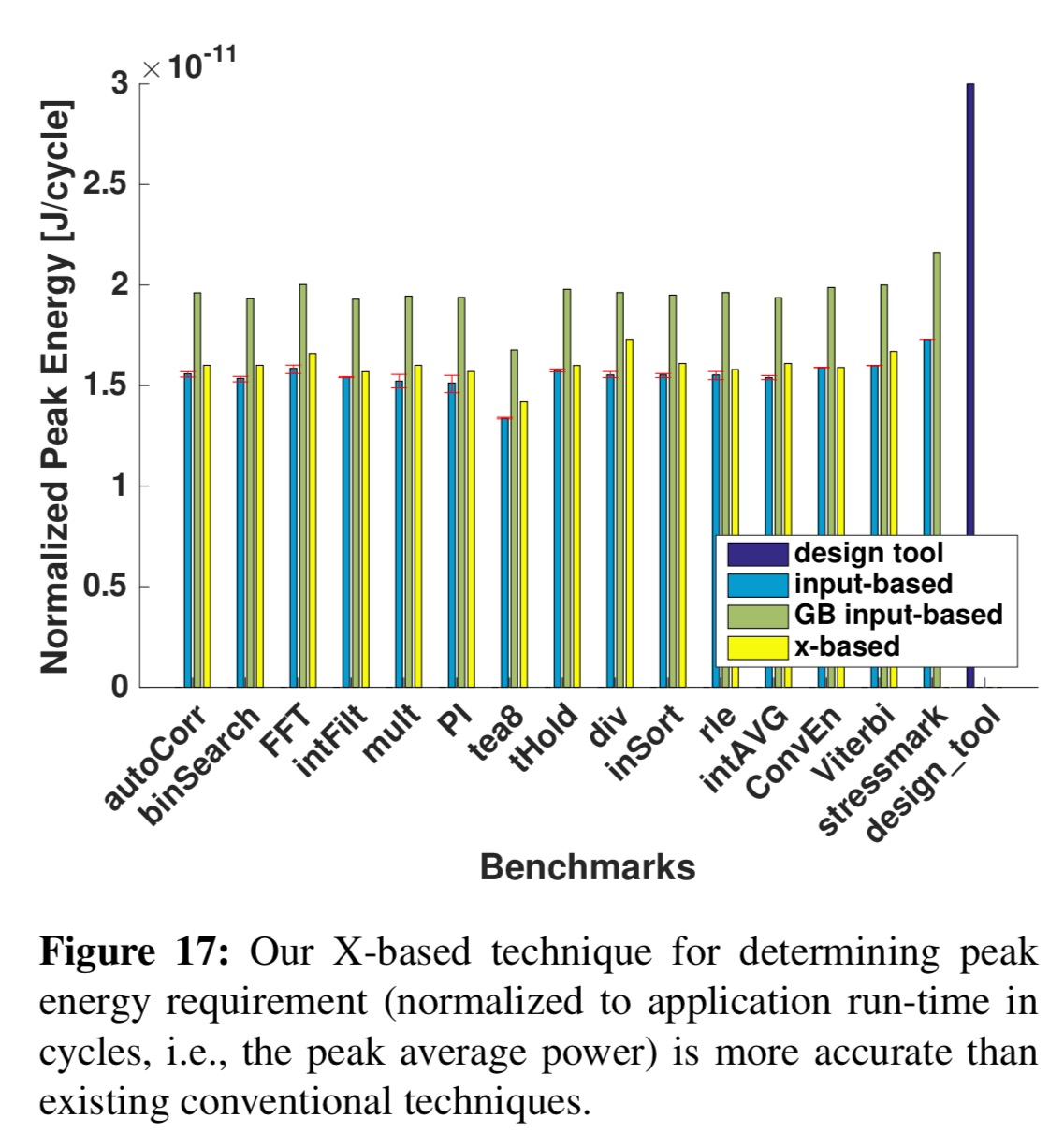 The following tables show how this would translate into harvester area and battery volume reductions. 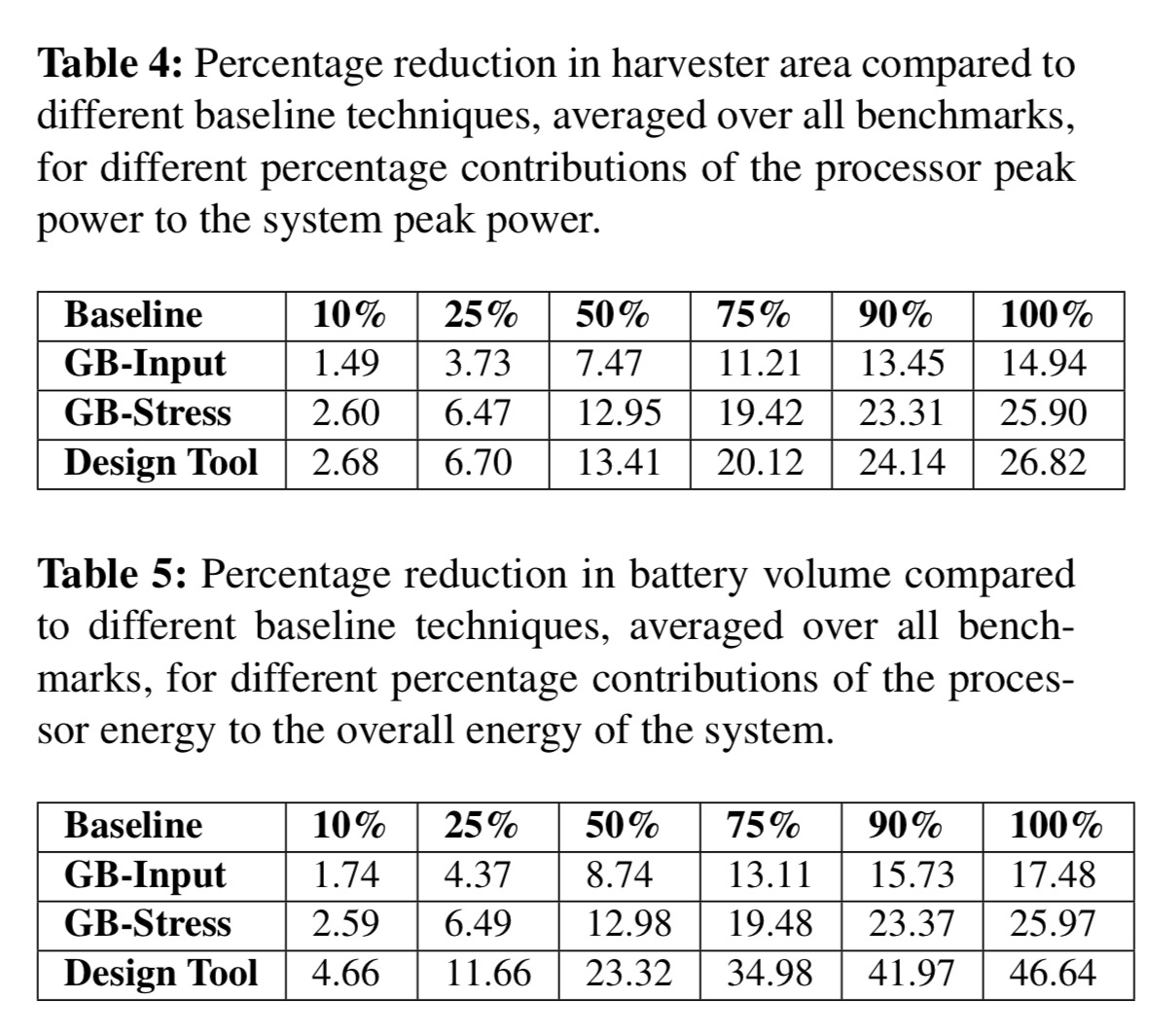 The technique can also be used to guide application-based optimisation by analysing the processor’s behaviour during the cycles of peak power consumption. Three different optimisations can then be applied as appropriate:

Taking combined figures across the benchmarks in the paper, these produced peak power reductions of up to 10% (5% on average), with up to 34% (18% on average) reduction in peak power dynamic range.