Return-oriented programming (ROP) attacks work by finding short instruction sequences in a process’ executable memory (called gadgets) and chaining them together to achieve some goal of the attacker. For a quick introduction to ROP, see “The geometry of innocent flesh on the bone…,” which we covered back in December of 2015.

Since ROP attacks can bypass Data Execution Protection and Address Space Layout Randomization (ASLR), ROP detection solutions attempt to detect ROP attacks at runtime, either by signature-based or anomaly-based detection. Signature-based defenses look for (pre-defined) patterns in the execution trace of programs. They have very low overhead but can be bypassed by suitably skilled attackers. Anomaly based detection methods learn what normal looks like, and then detect attacks by looking for deviations from the normal baseline. Recent ROP anomaly detectors have explored the use of hardware performance counters to detect anomalies, but the very use of such counters may also hide the underlying program behaviour meaning that they mask the very signals we want to detect.

Today’s paper introduces EigenROP, which investigates the use microarchitecture-independent program characteristics for the detection of ROP attacks. It significantly improves on the prior state-of-the-art for anomaly-based ROP detection, with a detection accuracy of 81% and only 0.8% false positives.

The high level approach works is summarised in Fig. 1 below:

Which characteristics have the most predictive power? 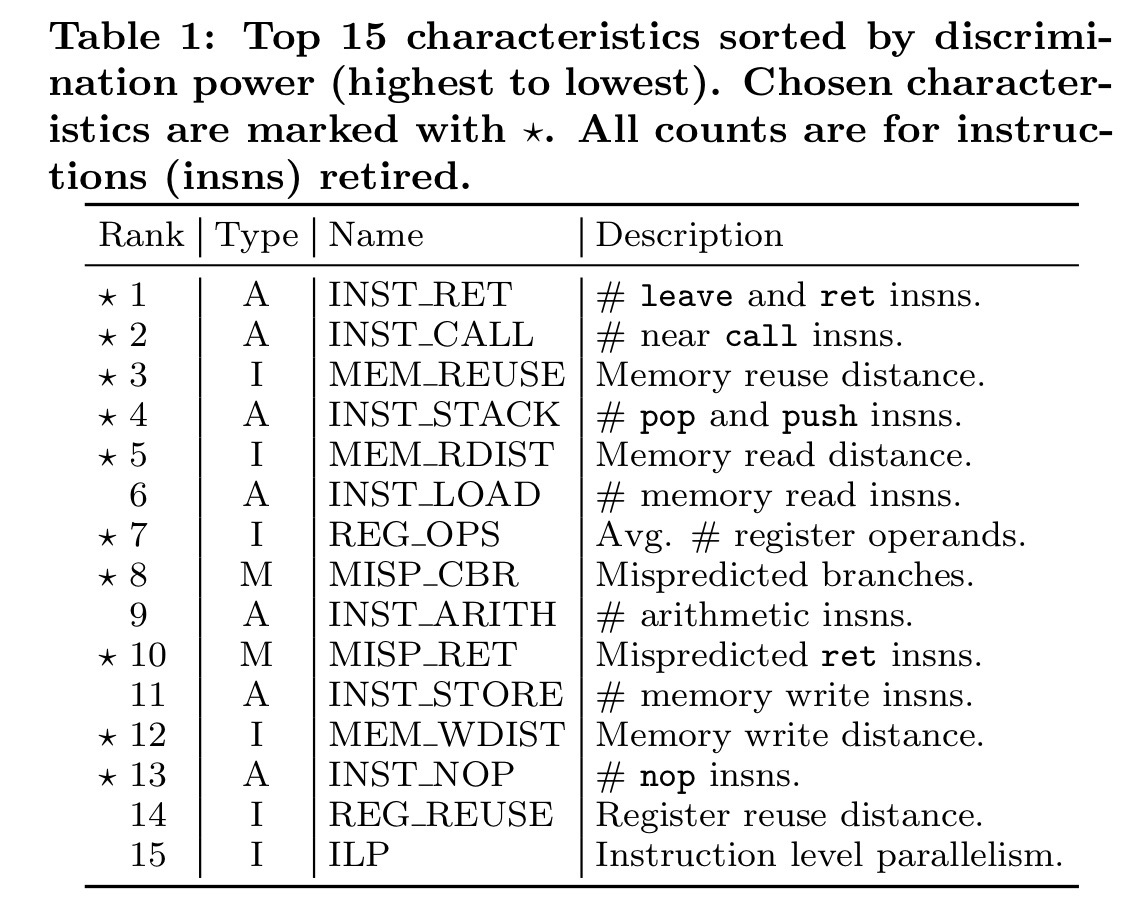 Let’s look at the intuition behind a few of these characteristics:

EigenROP is implemented in just 700 lines of Python using the MICA framework which is itself based on Intel’s Pin tool, and SciKit-Learn. Several detected-in-the-wild ROP attacks were used for the evaluation, as well as attacks generated by the ROPC gadgets finder and compiler for common Linux programs.

Despite the very small ROP length (only ~60 instructions in the case of the Linux Hex Editor ROP attack) when compared to the sampling window size, EigenROP still detected the deviation in the program’s characteristics.

The overall accuracy of EigenROP across the test set was 81% with a false positive rate of 0.8%. State of the art microarchitectural defenses achieved accuracy between 49% and 68%. 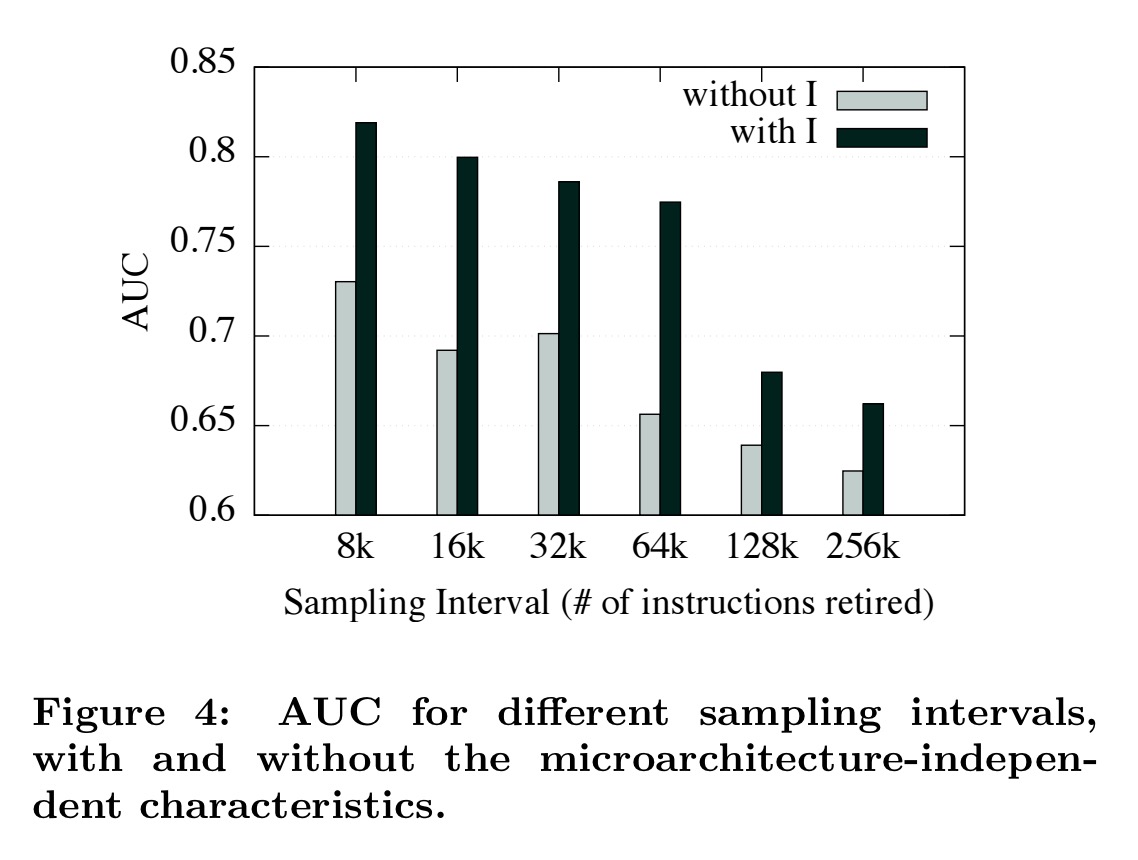 It’s possible to trade-off the overhead of EigenROP (by increasing the sampling interval) with detection accuracy, as the following chart reveals: 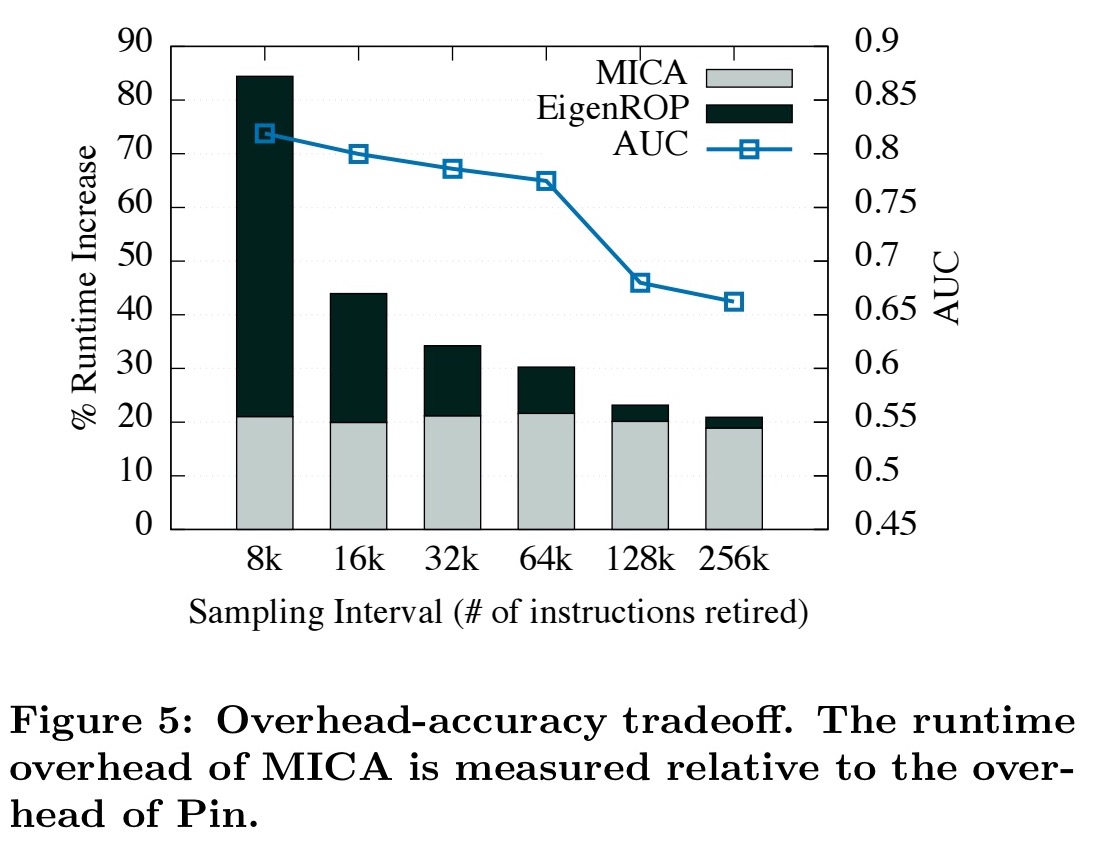 While our work demonstrates that ROP payloads can be detected using simple program characteristics, there are still needed improvements concerning detection accuracy of very short chains and overhead reduction. Future hardware support can help on both fronts by enabling low-cost fine-grained monitoring. Despite that, EigenROP raises the bar for ROP attacks, and can easily run in-tandem with complementary ROP defenses.