If you can’t beat them, join them: a usability approach to interdependent privacy in cloud apps Harkous & Aberer, CODASPY ’17

I’m quite used to thinking carefully about permissions before installing a Chrome browser extensions (they all seem to want permission to see absolutely everything – no thank you!). A similar issue comes up with third-party apps authorised to access documents in cloud storage services such as Google Drive and Dropbox. Many (64%) such third-party apps ask for more permissions than they really need, but Harkous and Aberer’s analysis shows that even if they don’t you can still suffer significant privacy loss. Especially revealing is the analysis that shows how privacy loss propagates when you collaborate with others on documents or folders, and one of your collaborators installs a third-party app which suddenly gains access to some of your own files, without you having any say in the matter.

Based on analyzing a real dataset of 183 Google Drive users and 131 third party apps, we discover that collaborators inflict a privacy loss which is at least 39% higher than what users themselves cause.

Given this state of affairs, the authors consider what practical steps can be taken to make users more aware of potential privacy loss, and perhaps change their decision making processes, when deciding which third-party apps should have access to files. Their elegant solution involves a privacy indicator (extra information shown to the user when deciding to grant a third-party app permissions) which a user study shows significantly increases the chances of a user making privacy-loss minimising decisions. Extrapolating the results of this study to simulations of larger Google Drive networks and an author collaboration network show that the indicator can help reduce privacy loss growth by 40% and 70% respectively.

With every app authorization decision that users make, they are trusting a new vendor with their data and increasing the potential attack surface… An additional intricacy is that when users grant access to a third-party app, they are not only sharing their own data but also others’ data. This is because cloud storage providers are inherently collaborative platforms where users share and cooperate on common files.

The main concept used in the paper to evaluate privacy loss is the notion of vendor file coverage (VFC). For a single vendor, this is simply the percentage of a users files that the vendor has access to, i.e., a number in the range 0..1. For V vendors we simply add up their coverage scores, giving a result in the range 0..V.

This metric choice allows relaying a message that is simple enough for users to grasp, yet powerful enough to capture a significant part of the privacy loss… telling users that a company has 30% of their files is more concrete than a black-box description informing them that the calculated loss is 30%.

The impact of collaboration

The first part of the study looks at a Google Drive based collaboration network collected during PrivySeal research that we will look at tomorrow. The dataset comprises 3,422 users, who between them had installed 131 distinct Google Drive apps from 99 distinct vendors.

The charts below show the distributions of files, sharing, collaborators, and vendors per user. 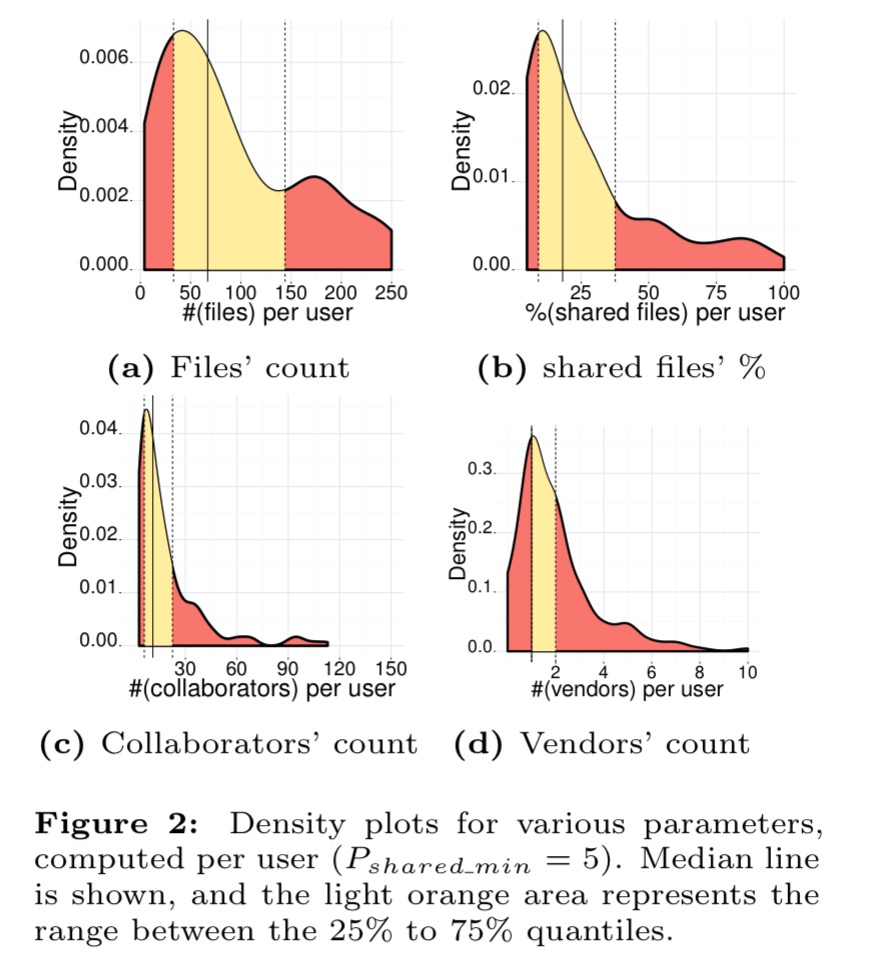 The chart below shows the impact of sharing on privacy loss, broken down into populations that share differing percentages of their files. Even at 5% sharing, the median Collaborators-VFC score is 39% higher than the corresponding Self-VFC score – and at 60% sharing this jumps to a 100% increase in VFC score. 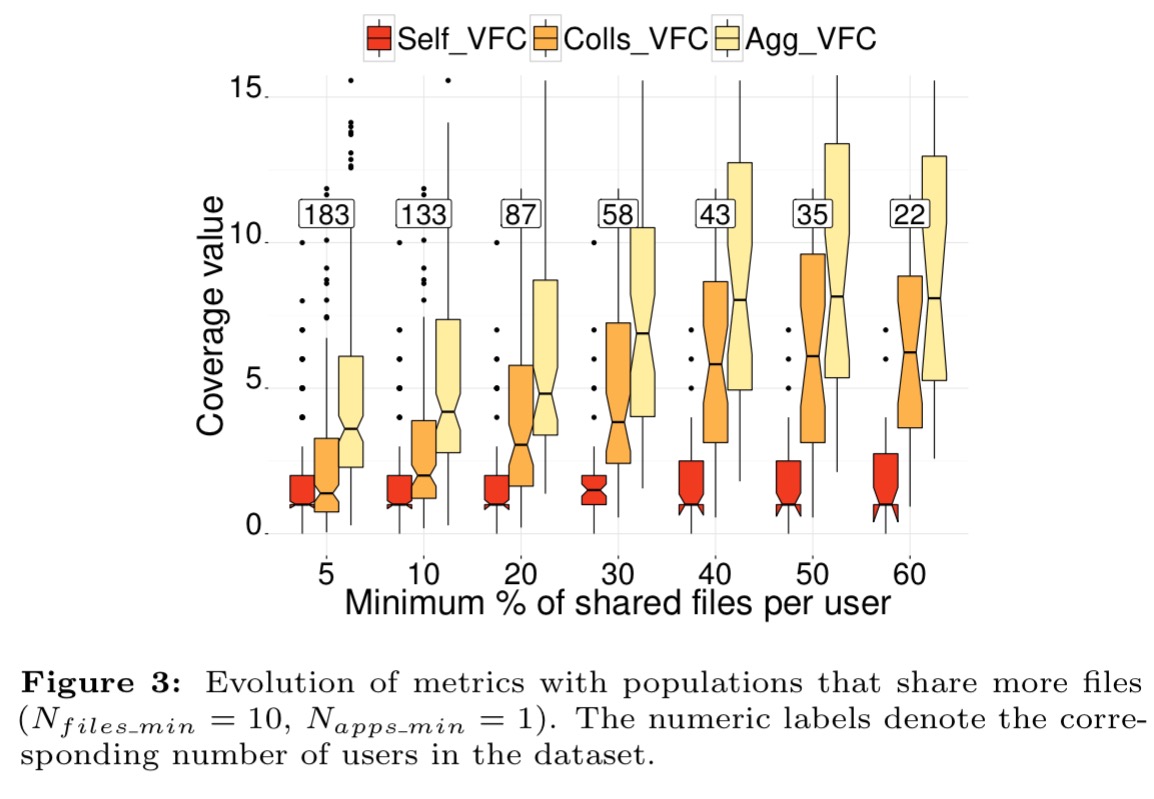 Now the question becomes: how can we help users minimise their privacy loss when selecting third-party applications? The standard Google Drive application permissions dialog looks like this: 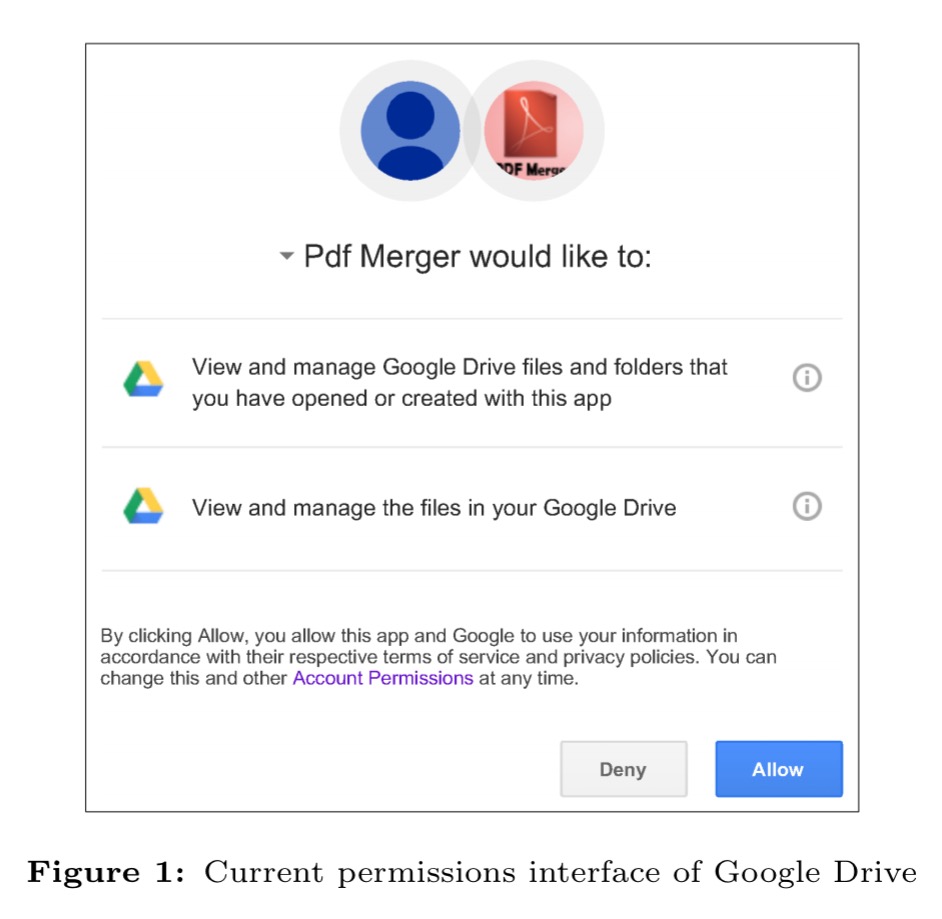 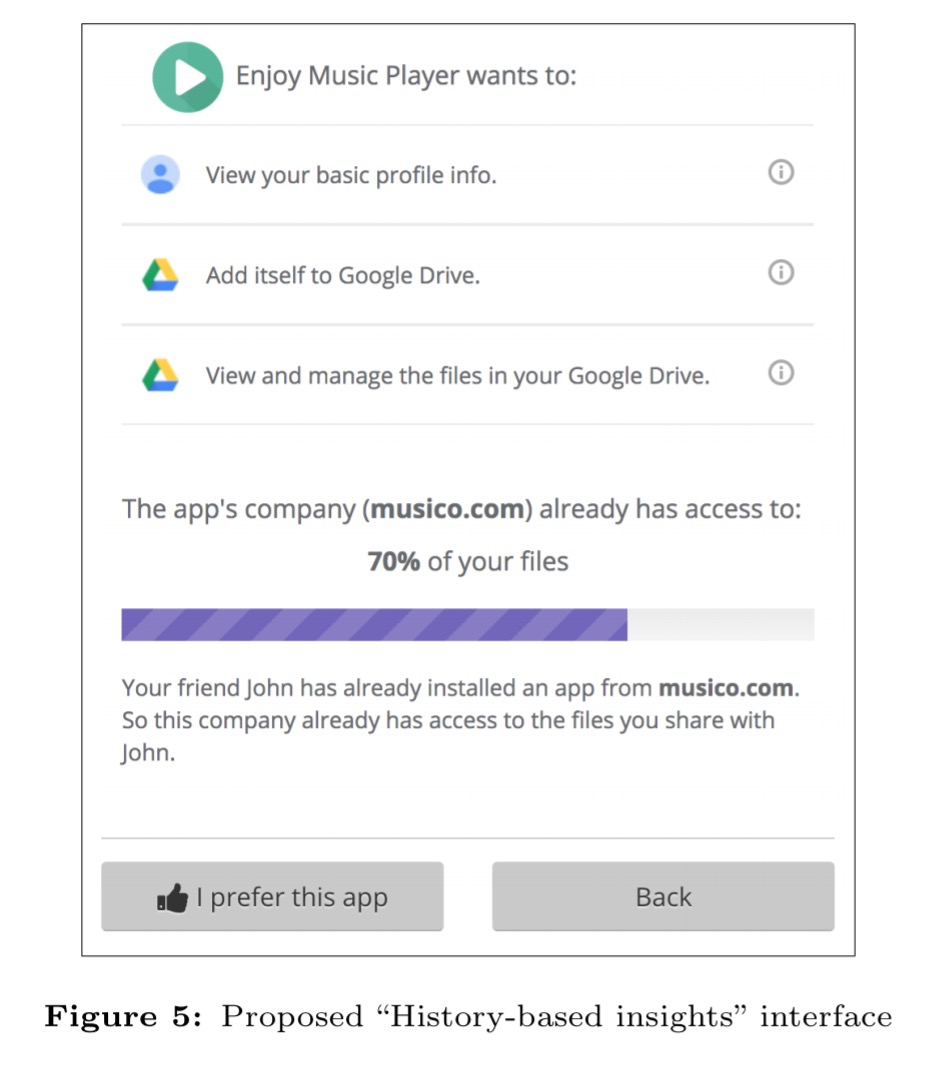 We call our proposed privacy indicators “History-based Insights” as they allow users to account for the previous decisions taken by them or by their collaborators.

Note that the enhanced dialog shows the percentage of files readily accessible by the vendor. The best strategy for the user to minimise privacy loss when considering a new app (if there are several alternatives available) is to select the vendor that already has access to the largest percentage of the user’s files.

157 study participants were divided into two groups: one group (BL) performed a set of tasks using the standard permissions dialog, and the other group (HB) performed the same tasks but were shown the enhanced history-based insights dialog. The participants were told nothing more than that the study was designed to ‘check how people make decisions when they install third-party apps.’

There are four scenarios:

Here’s the summary table for these results: 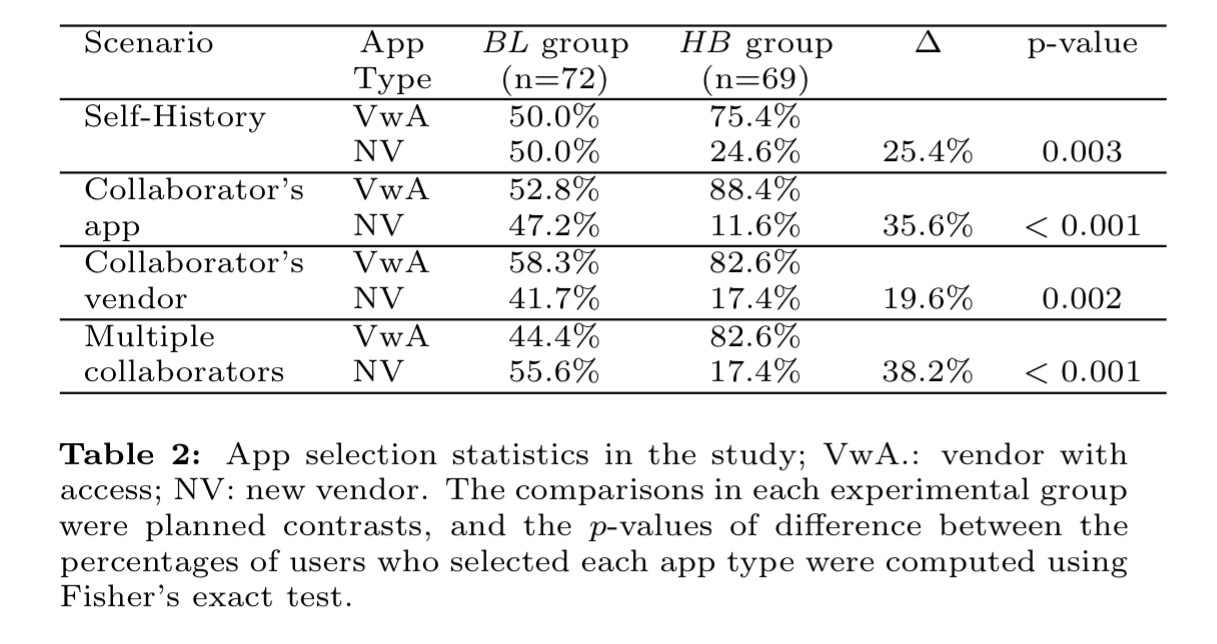 Overall, we found out that … participants in the HB group were significantly more likely to install the app with less privacy loss than those in the BL group.

The changes in behaviour from this study were extrapolated to two simulated larger networks: one Google Drive network seeded from the PrivySeal Dataset and inflated while retaining input degree distribution; and one network based on author collaborations on papers in the Microsoft Academic graph.

The charts below show the privacy loss under three scenarios: 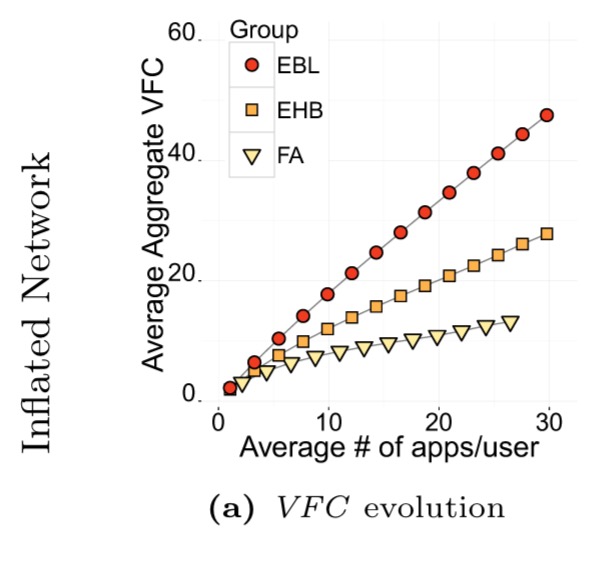 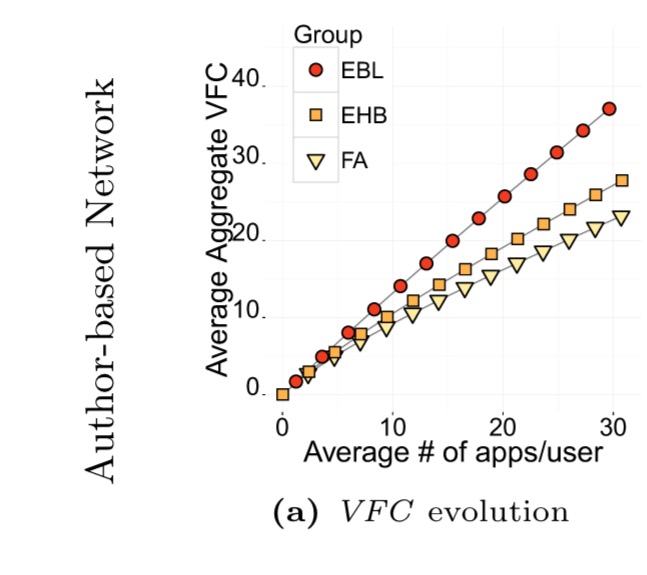 The privacy loss in the EHB group drops by 41% (inflated network) and 28% (authors network) respectively when compared to the baseline.

One of the major outcomes is that a user’s collaborators can be much more detrimental to her privacy than her own decisions. Consequently, accounting for collaborator’s decisions should be a key component of future privacy indicators in 3rd party cloud apps… Finally, due to their usability and effectiveness, we envision History-based Insights as an important technique within the movement from static privacy indicators towards dynamic privacy assistants that lead users to data-driven privacy decisions.