For example, background checkpointing in relational databases has been known to hinder delivering low and predictable transaction latency, but the database and operating system communities have no reasonable solution despite their collaborative efforts.

(As another example, consider what happens to your JVM when the garbage collector runs).

What about priorities you say? Yes, the solution does involve giving higher priority to critical I/O. What the authors show however is that priority information needs to flow through all layers of the storage stack (caching, file system, block, and device), and that priority inversions (where a high priority I/O ends up waiting on a low priority I/O) also need to be addressed. The request-centric I/O prioritization (RCP) scheme that they introduce does both.

This somewhat messy chart illustrates the point well. Here you’re looking at MongoDB running an update heavy YCSB workload. The grey line is the default Linux I/O scheduler (CFQ – Completely Fair Queuing), and the green line (CFQ-IDLE) is CFQ with low priority (idle-priority) assigned to the checkpoint task. SPLIT references variations of the Split-level scheduler (another cross-layer I/O scheduling framework we looked at previously, although it does not consider priority inversions). QASIO does consider priority inversions, but is more limited in scope. Compared to all the other approaches, the throughput with RCP (the black line) is much more consistent, avoiding the large peaks and troughs in the CFQ line for example. 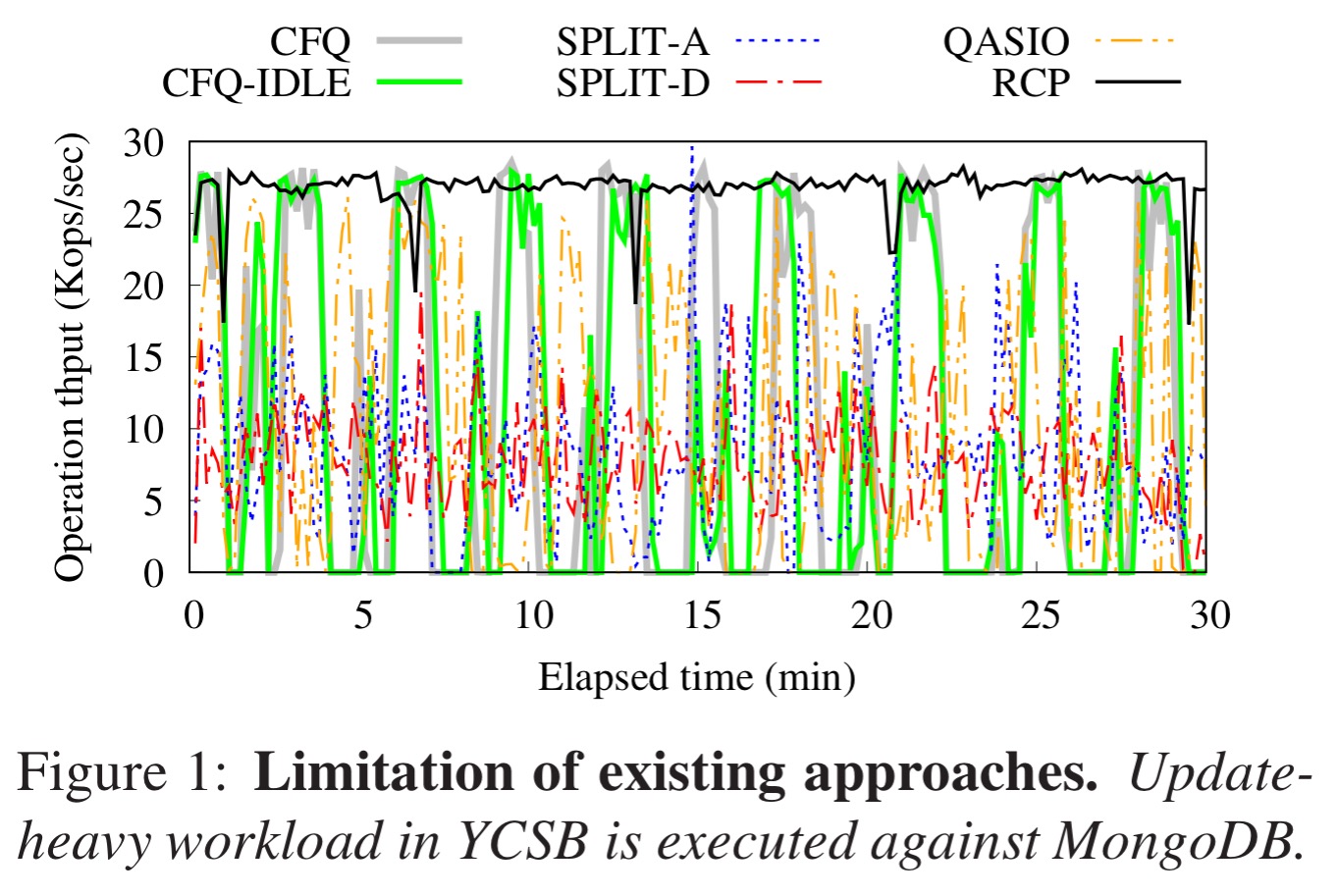 The 3,100 lines of code needed to implement RCP in Linux make a big difference: tested with PostgreSQL, MongoDB, and Redis, RCP delivered up to 53% higher request throughput and 42x better 99%-ile request latency compared to the default configuration in Linux.

Causes of inconsistent performance for requests

The layering in a typical modern storage stack is shown in the figure below (centre and left). Priority agnostic admission control in the caching and block layers can degrade application performance. In the file system layer fate sharing of buffered writes in a single global compound transaction can leave foreground tasks waiting on background task I/O. Shared block level queues in the block layer also mean that a burst of background I/Os can delay foreground I/O by filling the queue. There is further re-ordering at the device level due to the limited size of device internal queues and firmware reordering. What we really need instead is an end-to-end view of I/O priority that can be taken into account at each layer.

Priority inversions (right-hand side of the figure above) comes in two flavours: task dependencies and I/O dependencies. A task dependency arises when two tasks interact with each other via synchronisation primitives such as locks and condition variables.

I/O dependencies occur when a task needs to wait for the completion of an existing I/O in order to ensure correctness and/or durability. For example, a foreground fsync call may be blocked waiting for completion of a write from a kernel thread cleaning buffer caches.

Once the task and the I/O induced priority inversions occur, the foreground task could wait for a long time because each layer in the I/O path can arbitrarily prolong the processing of low-priority background I/Os.

Dealing with I/O priority inversions is made more challenging for two key reasons: (i) dependency relationships may depend on runtime conditions, such that they can’t be statically determined, and (ii) dependency occurs in a transitive manner involving multiple concurrent tasks blocked at either synchronization primitives or I/O stages in multiple layers.

It’s closest in spirit to a task-centric approach, but also allows background tasks of lower priority to become high priority when priority inversions are detected.

RCP classifies I/Os as critical and non-critical, finding that these two priorities are sufficient to obtain good performance. A critical I/O is one that is in the critical path of request handling (i.e., it can directly affect the response time). The process begins by tracking the set of tasks involved in request handling, and the simple solution to this is minimal application instrumentation. It took 15, 14, and 2 lines of code to add the necessary tagging to PostgreSQL, MongoDB, and Redis, respectively.

With foreground tasks tagged at initiation, the next step is to handle priority I/O inversions caused by runtime dependencies.

Inspired by previous work on CPU scheduling, we resolve the lock-induced dependency by inheriting critical I/O priority in a background task when it blocks a foreground task until it leaves a critical section.

The pragmatic solution is based on the assumption that if a task signals a condition once, it is likely to do so again in the future, and can therefore be tagged as a helper task.

Resolving dependencies to outstanding I/Os is achieved by tracking all non-critical I/Os in the block level queue. If a dependency occurs, it is bumped to critical.

With an understanding of critical and non-critical I/Os in place through a combination of initial tagging and priority inversion detection, the final piece of the puzzle is adapting each layer to make it understand and enforce the I/O criticality.

The scheme was implemented in 3100 lines of code and tested with PostgreSQL, MongoDB, and Redis. 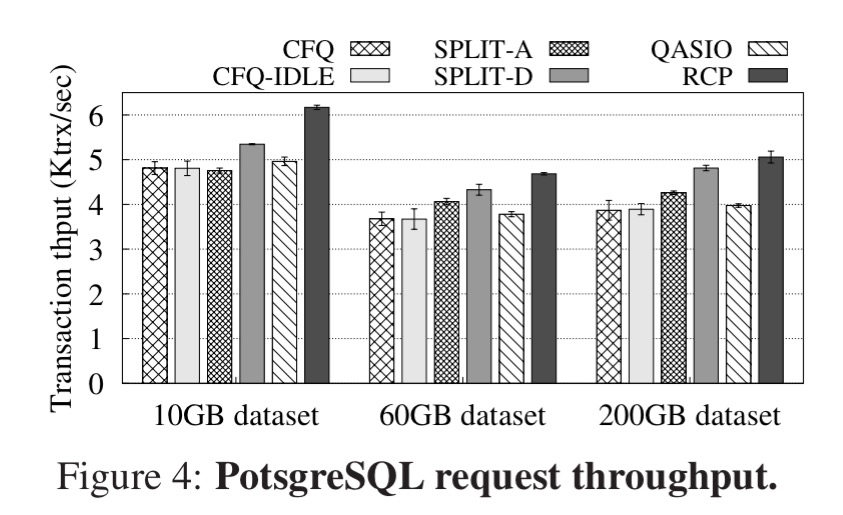 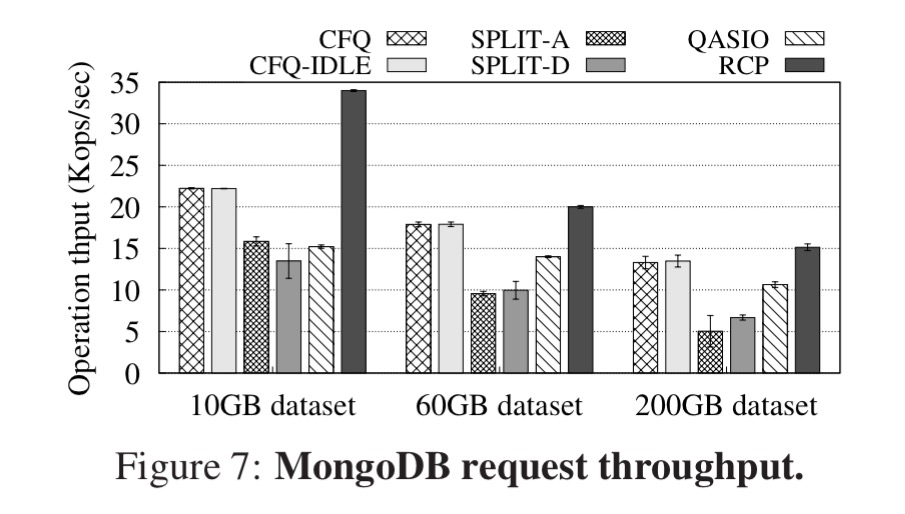 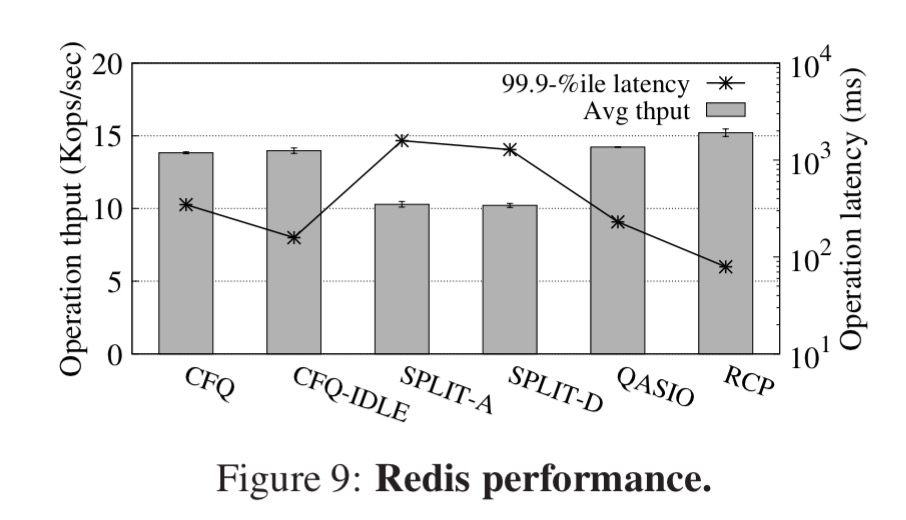 In order to show the effectiveness of RCP in terms of request latency, we ran a rate-controlled TPC-C workload (i.e., fixed number of transactions) with 100 scale factor. Figure 6 demonstrates a complementary cumulative distribution function (CCDF), and so the point (x,y) indicates that y is the fraction of requests that experience a latency of at least x ms. This form of representation helps visualizing latency tails, as y-axis labels correspond to the 0th, 90th, 99th (and so on) percentile latencies. 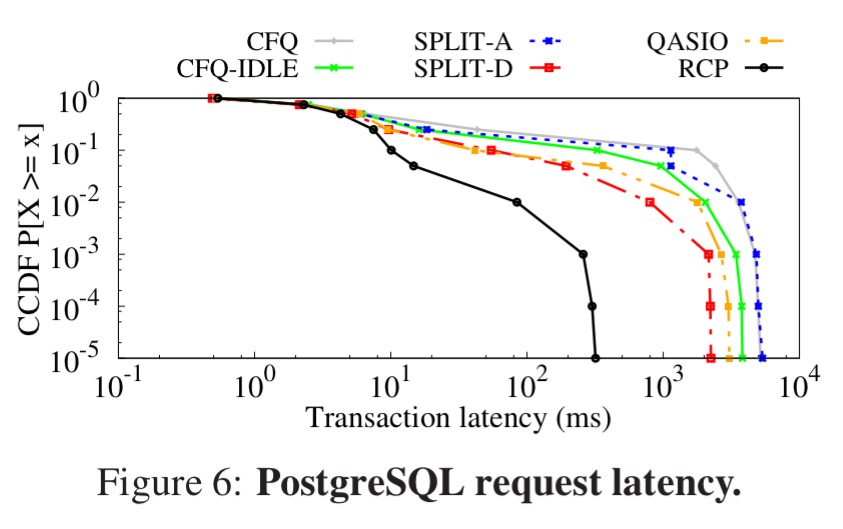 You can clearly see in the figure above that RCP does a much better job of curtailing tail latencies.

Here’s a similar chart for MongoDB using a YCSB workload: 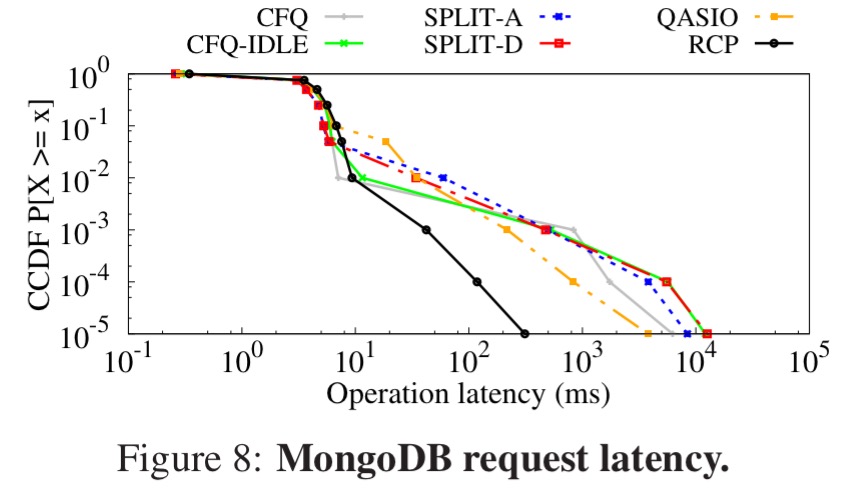 The authors also conduct an interesting experiment in which they selectively disable just one layer’s components in the scheme at a time, which fully supports the end-to-end argument by revealing that disabling the optimisation at any one layer degrades overall application throughput by 7-33% and 6-45% for PostgreSQL and MongoDB respectively.

The results all look great, but there’s just one snag:

Our prototype implementation involves modifications to all the layers and the synchronization methods in the I/O path, thereby hindering our scheme from wide adoption. The most promising direction to be practically viable is exploiting the Split framework. It provides a collection of handlers for an I/O scheduler to operate across all layers in the I/O path. We believe our scheme can be cleanly implemented based on the framework by controlling non-critical writes at the system-call level, before the caching and file system layer generates complex dependencies, and non-critical reads at the block-level.

We covered the Split framework on The Morning Paper at the tail end of 2015.