Let’s finish up our brief look at CIDR 2017 with something closer to the core of database systems research – query optimisation. For good background on this topic a great place to start is Selinger’s 1979 classic ‘Access path selection in a relational database management system‘ (System R). One of the trickiest areas in query optimisation is determining the best join strategy, and in the almost 40 years since that System R paper, a lot of work has been done on this problem. If you are joining n tables, the number of possible join orders grows with n! .

When estimating the potential costs of different join orders, a fundamental input is an estimation of the number of matching tuples in each of the relations to be joined (aka cardinality estimation).

Instead of using histograms to try and guess, for example, how many tuples a relation might have where

an alternative approach would be to sample a subset of the rows and see how many matches there are in the sampled subset. Sampling has not traditionally been used for two reasons:

For in-memory databases, the first consideration largely goes away – we can sample reasonable numbers of tuples in a small amount of time (though presumably we always still have some kind of space budget we also have to adhere to). To address the second consideration it would be ideal if the samples we took were somehow more likely to ‘survive’ the joining process, so that a sufficient number of tuples flow through to the next join…

In this work we propose a novel cardinality estimation technique that produces accurate results but is much cheaper than joining random samples. The basic building block is an efficient sampling operator that utilizes existing index structures: to get an estimate for

, we obtain a random sample of

(we could also start with

using an index on

). The resulting sample for

by using an index on the join attribute

Suppose we have a sample S as a result of sampling some relation T, and for the next step we want to create a sample of 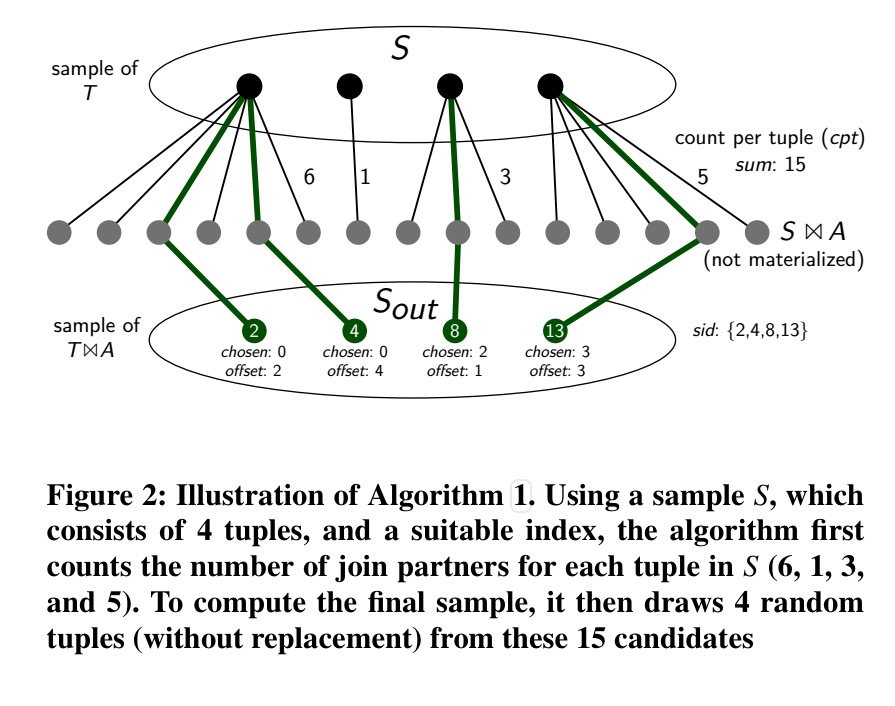 The index-based sampling operator can cheaply compute a sample for a join result, but it is not a full solution by itself. We also need a join enumeration strategy which can systematically explore the intermediate results of a query using the sampling operator, while also ensuring that the overall sampling time is limited. If we sampled every possible combination, it would take too long for queries with many joins. In the Join Order Benchmark (JOB), queries with 7 joins have 84-107 intermediate results, and queries with 13 joins have 1,517-2,032. A time limit is set on the sampling phase, after which the algorithm falls back to traditional estimation.

The advantage is that one quickly obtains accurate estimates for large intermediate results. The disadvantage is that many small intermediate results are not sampled and thus have to be estimated using traditional estimation. It is well known that—due to the independence assumption—traditional estimators tend to underestimate result sizes. Therefore, when this mix of (accurate) sampling-based estimates and traditional (under-)estimates are injected into a query optimizer, it will often pick a plan based on the traditional estimates (as they appear to be very cheap). This phenomenon has been called “fleeing from knowledge to ignorance” and—paradoxically—causes additional, accurate information to decrease plan quality.

To address this issue, joins are sampled ‘bottom-up’ – i.e., first all 2-way joins are computed, then all 3-way joins, and so on. “A cost-based query optimizer will thus have precise knowledge for the costs of the early (and often crucial) joins.”

Integrating this approach into an existing DBMS is pretty straightforward since you just need to inject the results into the cardinality estimation component of the query optimizer, and no changes to the cost model or plan space enumeration algorithm are necessary.

Any query optimizer change that increases the performance for the vast majority of queries, will also decrease performance for some queries, which is very undesirable in production systems. Existing database systems are therefore very conservative with query optimizer changes. Thus, one could use our approach as an optional tuning feature for queries that are slower than expected. In other words, if a user is not satisfied with the performance of a particular query, to get better performance she may turn on index-based sampling only for that query.

Evaluation is based on the Join Order Benchmark, based on the Internet Movie Database. There are 113 queries with 3 to 16 joins. As a worst case for planning complexity, indices are created on all primary key and foreign key columns. To compare with traditional cardinality estimates, the test harness supports injection of cardinality estimates from an outside system – in this case obtained from PostgreSQL using the EXPLAIN command.

You can see that compared to the PostgreSQL estimates (column 1), index-based sampling with even just 10K samples produces much more accurate estimates. Also note how estimation accuracy decreases with the number of joins. The more samples we have of course, the closer we get to the true cardinalities. 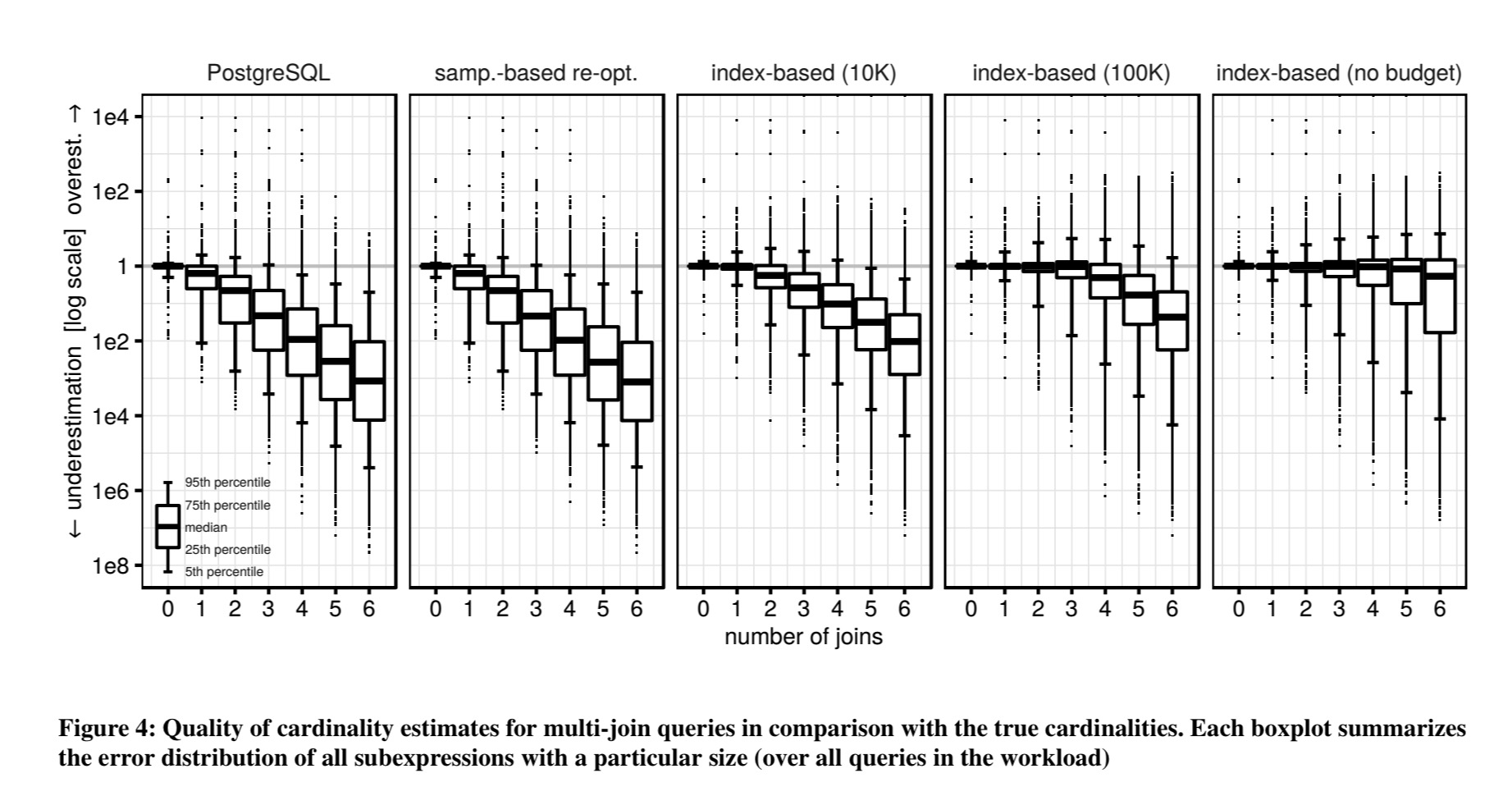 Do these more accurate cardinality estimates actually lead to better plans? In figure 6 below you can see the plan quality (log scale) of the plans produced. The cost of each query is normalized by the cost of the optimal plan that would have been chosen if the true cardinalities were known. 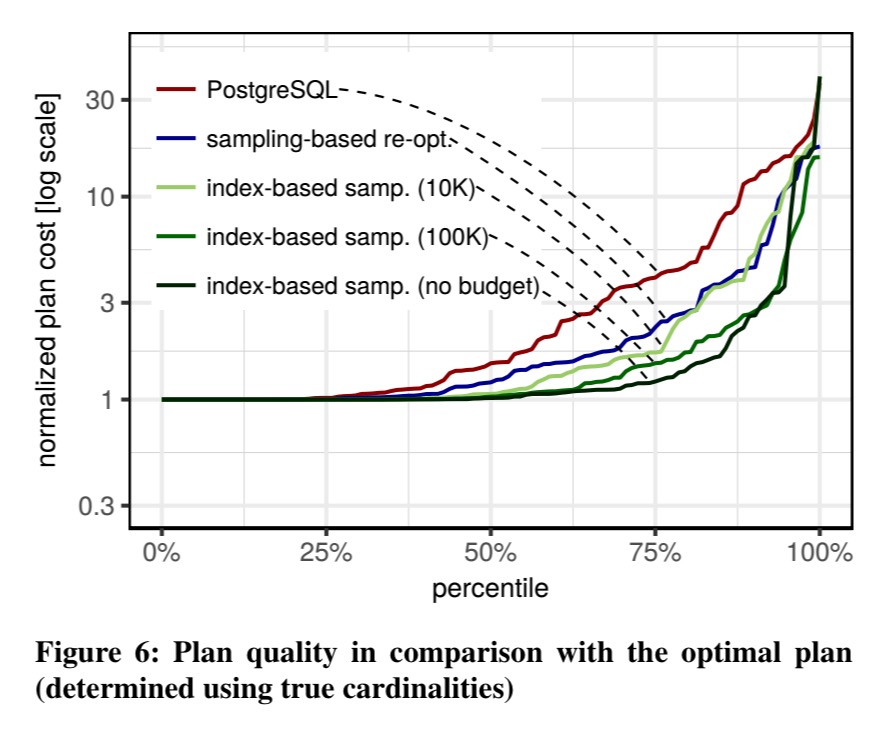 As expected, these better plans lead (mostly!) to faster runtimes: 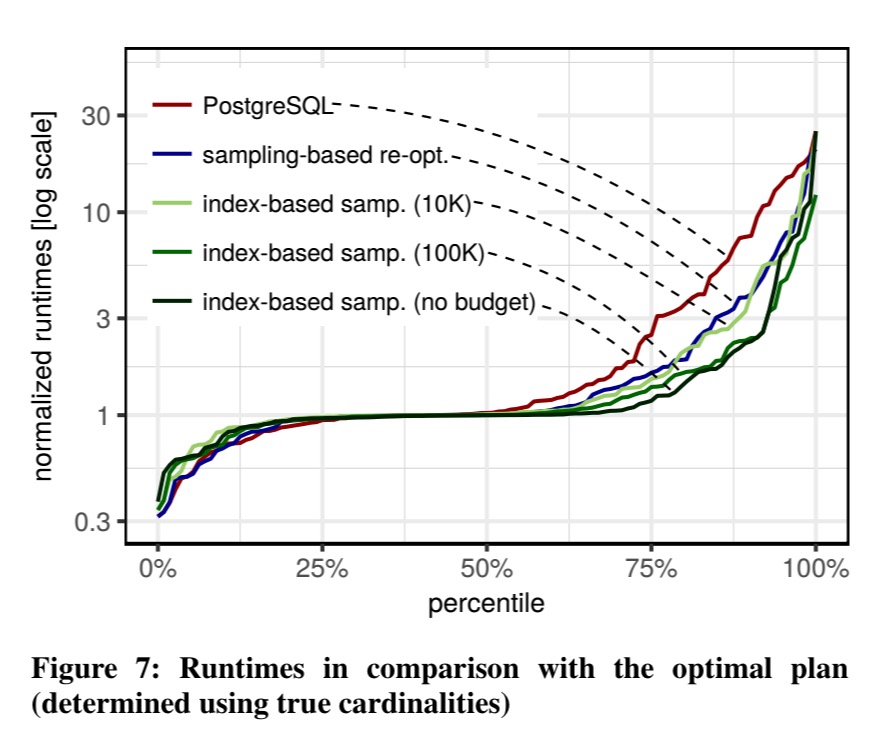 A small number of plans are actually faster (up to 3x) with inaccurate estimates rather than with the true cardinalities.

This effect is caused by cost model errors rather than inaccurate cardinalities and explains the hesitation of many commercial database systems to change their query optimizers.