The opening section of Prof. Demirbas’ reading list is concerned with programming the datacenter, aka ‘the Datacenter Operating System’ – though I can’t help but think of Mesosphere when I hear that latter phrase. There are four papers: in publication order these are “Apache Hadoop YARN” (which we’ll be looking at today), “Large-scale cluster management at Google with Borg“, “Firmament: Fast, Centralized Cluster Scheduling at Scale“, and “Slicer: Auto-Sharding for DataCenter Applications.”

The Borg paper of course describes the cluster management system that Google have been using for the last decade, and that gave us Kubernetes. Borg cells are on the order of 10,000 machines, and controlled by a highly available Borgmaster. One of the primary goals is to increase utilisation. Admission control sits in front of the scheduler to avoid overload, and manage user quotas. Borg jobs consist of multiple tasks, each running the same process.

Firmament is a scheduler (with a Kubernetes plugin under development) that balances the high-quality placement decisions of a centralised scheduler with the speed of a distributed scheduler. It managed to keep pace with the scheduling requirements of a 12,500 node cluster Google workload, at 300x real speed!

Slicer is Google’s auto-sharding service that separates out the responsibility for sharding, balancing, and re-balancing from individual application frameworks.

The YARN paper was published in 2013, based on a then-beta version of YARN. In this write-up therefore, I’m going to focus on the discussion of the requirements that drove the design of YARN and the high-level approach. For an up-to-date description of the details, see the Apache Hadoop YARN documentation.

How YARN came to be – the back story

Apache Hadoop was initially based on infrastructure for web crawling, using the now well-known MapReduce approach. Yahoo! adopted it for this purpose in 2006.

…it’s execution architecture was tuned for this use case, focusing on strong fault tolerance for massive, data-intensive computations.

Hadoop increasingly came to be the central repository of data within organisations, leading to a desire to run other kinds of applications on top of that data. As use of Hadoop extended beyond the web crawling use case, developers started to stretch the MapReduce programming model beyond its intended use cases – for example, submitting ‘map only’ jobs to spawn processes and using clever workarounds to sidestep MapReduce limits…

The limitations of the original Hadoop architecture are, by now, well understood by both the academic and open-source communities.

A new approach was needed to balance the diverse needs of different cluster users and applications. Yahoo! developed a private-cloud like ‘Hadoop-on-demand’ (HoD) capability to spin up Hadoop compute clusters on demand to process data in a shared HDFS. This led to ‘middling’ (i.e., not good enough) resource utilization in the end, and was ultimately retired…

While users were fond of many features in HoD, the economics of cluster utilization forced Yahoo! to pack its users into shared clusters… Ultimately HoD had too little information to make intelligent decisions about its allocations, its resource granularity was too coarse, and its API forced users to provide misleading constraints to the resource layer.

Moving to shared clusters though quickly exposed weaknesses in the JobTracker that became a single point of failure. A JobTracker failure would result in the loss of all running jobs in a cluster and require users to manually recover their workflows.

Pressure on the MapReduce programming model (which isn’t well suited to some kinds of large scale computations such as iterative machine learning and graph processing) led to users rolling their own solutions:

Hadoop’s wide deployment inside Yahoo! and the gravity of its data pipelines made these tensions irreconcilable. Undeterred, users would write “MapReduce” programs that would spawn alternative frameworks. To the scheduler they appeared as map-only jobs with radically different resource curves, thwarting the assumptions built into the platform and causing poor utilization, potential deadlocks, and instability.

YARN’s architecture is informed by all of these experiences at Yahoo!. It separates resource management from the programming model, and delegates many scheduling-related functions to per-job components.

In this new context, MapReduce is just one of the applications running on top of YARN. This separation provides a great deal of flexibility in the choice of programming framework…

10 requirements for a resource management infrastructure

Based on their experiences at Yahoo!, and with input from the community, the designers of YARN identified 10 requirements that a resource management infrastructure for Hadoop needed to satisfy:

Out of these, YARN was born, and the rest, as they say, is history.

To address [the requirements discussed above], YARN lifts some functions into a platform layer responsible for resource management, leaving coordination of logical execution plans to a host of framework implementations. Specifically, a per-cluster ResourceManager (RM) tracks resource usage and node liveness, enforces allocation invariants, and arbitrates contention among tenants.

The ResourceManager is a centralized service with a global view of cluster resources. It allocates leases called containers (which can nowadays be mapped to Docker containers if so desired) to applications to run on particular nodes. Each node runs a daemon process called the NodeManager which the ResourceManager coordinates with. NodeManagers are responsible for monitoring resource availability, reporting faults, and managing container lifecycles.

Jobs are submitted to the ResourceManager, and if admitted to the cluster are passed to a scheduler to be run.

The ApplicationMaster is the “head” of a job, managing all lifecycle aspects including dynamically increasing and decreasing resources consumption, managing the flow of execution (e.g., running reducers against the output of maps), handling faults and computation skew, and performing other local optimizations. In fact, the AM can run arbitrary user code, and can be written in any programming language since all communication with the RM and NM is encoded using extensible communication protocols. 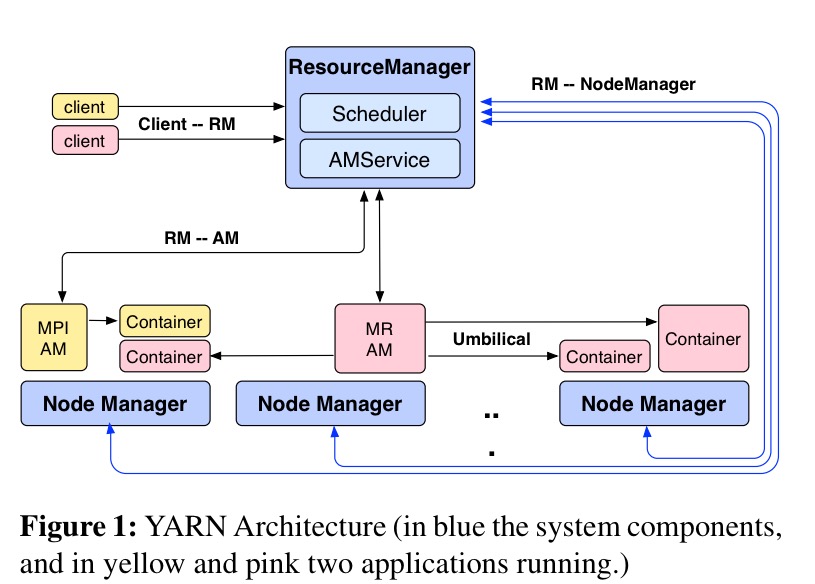 To get the resources it needs, an AM issues requests to the ResourceManager. The ResourceManager attempts to satisfy these based on availability and scheduling policies. The Application Master takes on a lot of the burden of supporting a given programming model, including planning the most efficient execution strategy based on the resources made available to it.

Since the AM is itself a container running in a cluster of unreliable hardware, it should be resilient to failure. YARN provides some support for recovery, but because fault tolerance and application semantics are so closely intertwined, much of the burden falls on the AM.

The end result of all the work on YARN was a system that provides greater scalability, higher efficiency, and the ability for a large number of different frameworks to efficiently share a cluster.

Finally, in the related work section, there’s also an interesting paragraph giving the authors’ perspective on YARN as compared to Mesos:

While Mesos and YARN both have schedulers at two levels, there are two very significant differences. First, Mesos is an offer-based resource manager, whereas YARN has a request-based approach. YARN allows the AM to ask for resources based on various criteria including locations, allows the requester to modify future requests based on what was given and on current usage. Our approach was necessary to support the location based allocation. Second, instead of a per-job intra-framework scheduler, Mesos leverages a pool of central schedulers (e.g., classic Hadoop or MPI). YARN enables late binding of containers to tasks, where each individual job can perform local optimizations, and seems more amenable to rolling upgrades (since each job can run on a different version of the framework). On the other side, per-job ApplicationMaster might result in greater overhead than the Mesos approach.