This is the second of Barbara Liskov’s 7 ‘must-read’ CS papers. Wirth’s main point is that we have a tendency to focus far too much on mastering the syntax and style associated with a particular programming language, and nowhere near enough time on the process by which new programs are designed in the first place.

… active programming consists of the design of new programs, rather than contemplation of old programs… Clearly, programming courses should teach methods of design and construction, and the selected examples should be such that a gradual development can be nicely illustrated.

By far the bulk of the paper though, is dedicated to one worked example of this principle, introducing the idea of stepwise refinement.  The goal is to write a program to solve the eight-queens problem. 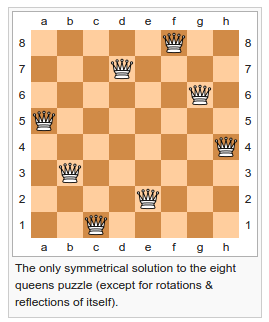 Wirth starts out with a very high level sketch of a solution, and gradually fills in the details to make both a more concrete and a more efficient implementation over time.

In each step, one or several instruction of the given program are decomposed into more detailed instructions. This successive decomposition or refinement of specifications terminates when all instructions are expressed in terms of an underlying computer or programming language, and must therefore be guided by the facilities available on that computer or language.

It’s not just about refinement of the tasks involved in the program; crucially the data and data representations may also need to be refined. “It is natural to refine program and data specifications in parallel.” It’s interesting to think about the task-based decomposition that naturally arises from this method, and contrast it with Parnas’ advice in “On the criteria to be used in decomposing systems into modules“. The stepwise refinement example in this paper though is ‘in the small,’ and really about the stepwise refinement of an algorithm as much as anything.

Reading through the worked example, I’m glad we have higher-level programming languages to work with these days! (The paper uses Algol 60). There are a few too many global variables and pointers for modern tastes.  The thinking process is still valuable though.

A guideline in the process of stepwise refinement should be the principle to decompose decisions as much as possible, to untangle aspects which are only seemingly interdependent, and to defer those decisions which concern details of representation as long as possible.

Here are the steps in Wirth’s refinement:

Development of the program…

Only at this point does Wirth think about moving into code. The first version is expressed in terms of a number of high-level procedures, whose details have yet to be filled in:

The next step is to begin to fill-in the details of those procedures, at which point we can no longer defer any decision about data representation.

(Or as Parnas would advise us, to hide information about data representation from the rest of the program).

With a little thought, Wirth rejects the straightforward 8×8 boolean matrix in favour of an array of columns.  Analysing the efficiency of the resulting structure, Wirth then introduces auxiliary variables that make it more computationally efficient to determine whether or not a given square is safe to place a queen on.

Upon every introduction of auxiliary data, care has to be taken of their correct initialization…

The final version of the program still displays the structure of the version designed in the first step… “other, equally valid solutions can be suggested and be developed by the same process of stepwise refinement.

Wirth concludes with five remarks about the process:

Among these criteria [for the design decisions] are efficiency, storage economy, clarity, and regularity of structure. Students must be taught to be conscious of the involved decisions and to critically examine and to reject solutions, sometimes even if they are correct as far as the result is concerned; they must learn to weigh the various aspects of design alternatives in the light of these criteria. In particular, they must be taught to revoke earlier decisions and to back up, if necessary, even to the top.