On the criteria to be used in decomposing systems into modules David L Parnas, 1971

Welcome back to a new term of The Morning Paper! I thought I’d kick things off by revisiting a few of my favourite papers from when I very first started this exercise just over two years ago. At that time I wasn’t posting blog summaries of the papers, so it’s nice to go back and fill in that gap (blog posts started in October of 2014). Plus, revisiting some of the classics once every couple of years seems like a good idea – changing external circumstances can make them feel fresh again every time you read them.

Today’s choice is a true classic, “On the criteria to be used in decomposing systems into modules.” If we give that title a slight twist – “On the criteria to be used in decomposing systems into services” – it’s easy to see how this 45-year old paper can speak to contemporary issues.  And from the very first sentence of the abstract you’ll find some shared goals with modern development: “This paper discusses modularization as a mechanism for improving the flexibility and comprehensibility of a system while allowing the shortening of its development time.” Flexibility (we tend to call it agility) and faster development times remain top of mind today.  Comprehensibility less so, but perhaps we should be paying more attention there? Say you’re all bought into cloud native microservices based architectures, is splitting your system up into multiple independent services going to help you achieve your goals? Parnas brings a keen insight:

The effectiveness of a “modularization” is dependent upon the criteria used in dividing the system into modules.

A timely reminder that it’s not simply about having lots of small modules, a large part of the success or otherwise of your system depends on how you choose to divide the system into modules in the first place.  When Parnas talks about a “module” in the paper, his definition is a work assignment unit, rather than a subprogram unit.

Parnas sets out three expected benefits of modular programming. We can look at those through the lens of microservices too:

Different ways of dividing the system into modules bring with them different communication and coordination requirements between the individuals (or teams) working on those modules, and help to realise the benefits outlined above to greater or lesser extents.

The famous example at the heart of the paper is the development of a system to generate a ‘KWIC’ index given an ordered set of lines as input. Any line can be “circularly shifted” by repeatedly removing the first word and adding it to the end of the line. The system outputs a listing of all circular shifts of all lines in alphabetical order. Parnas acknowledges this is somewhat of a toy example, but “we shall go through the exercise of treating this problem as if it were a large project.”

Two decompositions are examined. In the first decomposition, each major step or task in the processing workflow is made into its own independent module (service).  This leads to five modules:

Modules 1 through 4 are operating on shared data structures in memory. 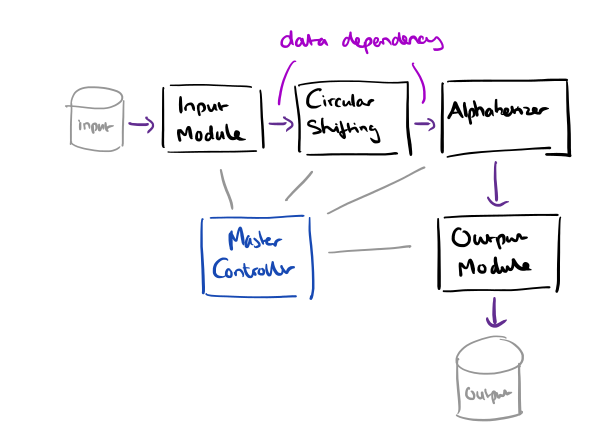 This is a modularization in the sense meant by all proponents of  modular programming. The system is divided into a number of relatively independent modules with well defined interfaces; each one is small enough and simple enough to be thoroughly understood and well programmed.  Experiments on a small scale indicate that this is approximately the decomposition which would be proposed by most programmers for the task specified.

The second decomposition looks similar on the surface: 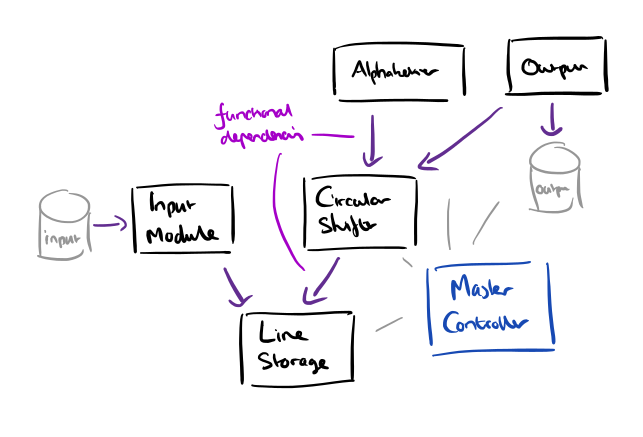 This decomposition however, was created on the basis of information hiding.

There are a number of design decisions which are questionable and likely to change under many circumstances… It is by looking at changes such as these that we can see the differences between the two modularizations.

In the first decomposition, many changes (for example, the decision to have all lines stored in memory) require changes in every module,  but with the second decomposition many more potential changes are confined to a single module.

Regarding comprehensibility, in the first decomposition the system can only really be understood as a whole, “it is my (Parnas’s) subjective judgement that this is not true in the second modularization.”

Every module in the second decomposition is characterized by its knowledge of a design decision which it hides from all others. Its interface or definition was chosen to reveal as little as possible about its inner workings.

There’s a potential drawback to the second decomposition though, which is even more important when packaging modules as independent services:

If we are not careful, the second decomposition will prove to be much less efficient. If each of the “functions” is actually implemented as a procedure with an elaborate calling sequence there will be a great deal of such calling due to the repeated switching between modules. The first decomposition will not suffer from this problem because there is a relatively infrequent transfer of control between the modules.

To avoid this overhead Parnas recommends a tool that enables programs to be written as if the functions were subroutines, but assembled via whatever mechanism is appropriate. This is more challenging in a microservices world!

In conclusion, while much attention is given to the need to divide a system into modules (microservices), much less attention has been given to the criteria by which we decide on module boundaries. As Parnas shows us, it might be a good idea to think about those criteria in your next project, as they have a strong influence on development time, system agility, and comprehensibility.

We have tried to demonstrate by these examples that it is almost always incorrect to begin the decomposition of a system into modules on the basis of a flowchart. We propose instead that one begins with a list of difficult design decisions or design decisions which are likely to change. Each module is then designed to hide such a decision from the others. Since, in most cases, design decisions transcend time of execution, modules will not correspond to steps in the processing…