If you’ve seen one Atari game you’ve seen them all, or at least once you’ve seen enough of them anyway. When we (humans) learn, we don’t start from scratch with every new task or experience, instead we’re able to build on what we already know. And not just for one new task, but the accumulated knowledge across a whole series of experiences is applied to each new task. Nor do we suddenly forget everything we knew before – just because you learn to drive (for example), that doesn’t mean you suddenly become worse at playing chess. But neural networks don’t work like we do. There seem to be three basic scenarios:

The last case gets closest to knowledge transfer across domains, but can have limited applicability.

This paper introduces progressive networks, a novel model architecture with explicit support for transfer across sequences of tasks. While fine tuning incorporates prior knowledge only at initialization, progressive networks retain a pool of pretrained models throughout training, and learn lateral connections from these to extract useful features for the new task.

The progressive networks idea is actually very easy to understand (somewhat of a relief for someone like myself who is just following along as an interested outsider observing developments in the field!). Some of the key benefits include:

Thus they are a stepping stone towards continual / life-long learning systems. 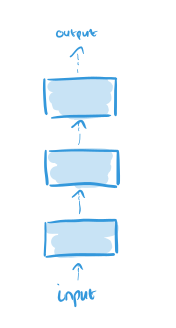 When it comes time to learn the second task, we add an additional column and freeze the weights in the first column (thus catastrophic forgetting, or indeed any kind of forgetting is impossible by design). The outputs of layer l in the original network becomes additional inputs to layer l+1 in the new column. 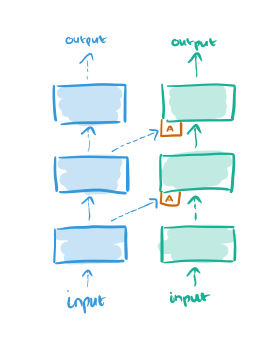 The new column is initialized with random weights.

We make no assumptions about the relationship between tasks, which may in practice be orthogonal or even adversarial. While the fine tuning stage could potentially unlearn these features, this may prove difficult. Progressive networks side-step this issue by allocating a new column for each task, whose weights are initialized randomly.

Suppose we now want to learn a third task. Just add a third column, and connect the outputs of layer l in all previous columns to the inputs of layer l+1 in the new column: 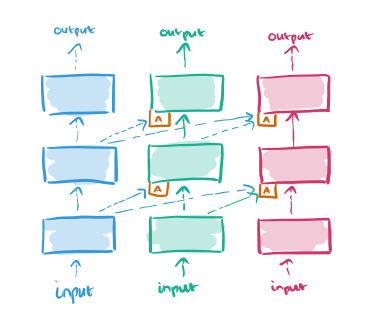 This input connection is made through an adapter which helps to improve initial conditioning and also deals with the dimensionality explosion that would happen as more and more columns are added:

…we replace the linear lateral connection with a single hidden layer MLP (multi-layer perceptron). Before feeding the lateral activations into the MLP, we multiply them by a learned scalar, initialized by a random small value. Its role is to adjust for the different scales of the different inputs. The hidden layer on the non-linear adapter is a projection onto an n<sub>l</sub> dimensional subspace (n<sub>l</sub> is the number of units at layer _l).

As more tasks are added, this ensures that the number of parameters coming from the lateral connections remains in the same order.

The evaluation uses the A3C framework that we looked at yesterday. It’s superior convergence speed and ability to train on CPUs made it a natural fit for the large number of sequential experiments required for the evaluation.  To see how well progressive networks performed, the authors compared both two and three-column progressive networks against four different baselines:

For the Pong challenge, baseline 3 (fine tuning a network pre-trained on Pong prior to the synthetic change) performed the best of the baselines, with high positive transfer. The progressive network outperformed even this baseline though, with better mean and median scores.

As the mean is more sensitive to outliers, this suggests that progressive networks are better able to exploit transfer when transfer is possible (i.e. when source and target domains are compatible). 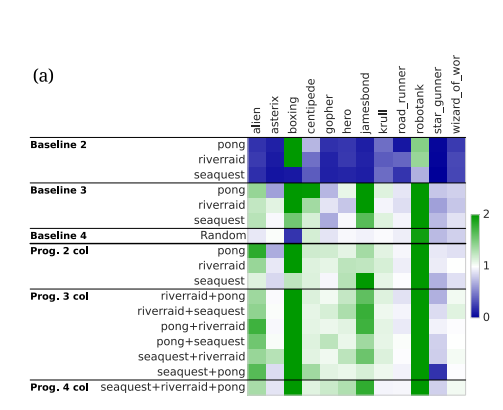 Seaquest -> Gopher (two quite different games) is an example of negative transfer:

With the Labyrinth tests, the progressive networks once again yield more positive transfer than any of the baselines.

Progressive networks are a stepping stone towards a full continual learning agent: they contain the necessary ingredients to learn multiple tasks, in sequence, while enabling transfer and being immune to catastrophic forgetting. A downside of the approach is the growth in number of parameters with the number of tasks. The analysis of Appendix 2 reveals that only a fraction of the new capacity is actually utilized, and that this trend increases with more columns. This suggests that growth can be addressed, e.g. by adding fewer layers or less capacity, by pruning [9], or by online compression [17] during learning. Furthermore, while progressive networks retain the ability to solve all K tasks at test time, choosing which column to use for inference requires knowledge of the task label. These issues are left as future work.

The other observation I would make is that the freezing prior columns certainly prevents catastrophic forgetting, but also prevents any ‘skills’ a network learns on subsequent tasks being used to improve performance on previous tasks. It would be interesting to see backwards transfer as well, and what could be done there without catastrophic forgetting.