After yesterday’s paper I needed something a little easier to digest today, and ‘Simple testing can prevent most critical failures’ certainly hit the spot. Thanks to Caitie McCaffrey from whom I first heard about it. The authors studied 198 randomly sampled user-reported failures from five data-intensive distributed systems (Cassandra, HBase, HDFS, MapReduce, Redis). Each of these systems is designed to tolerate component failures and is widely used in production environments.

For each failure considered, we carefully studied the failure report, the discussion between users and developers, the logs and the code, and we manually reproduced 73 of the failures to better understand the specific manifestations that occurred.

There are a lot of really interesting findings and immediately applicable advice in this paper. But the best of all for me is the discovery that the more catastrophic the failure (impacting all users, shutting down the whole system etc.), the simpler the root cause tends to be. In fact:

Almost all catastrophic failures (48 in total – 92%) are the result of incorrect handling of non-fatal errors explicitly signalled in software.

And about a third of those (these are failures that brought down entire production systems remember) are caused by trivial mistakes in error handling. They could have been detected by simple code inspection without even requiring any specific knowledge of the system. Here are the three things you want to check for: 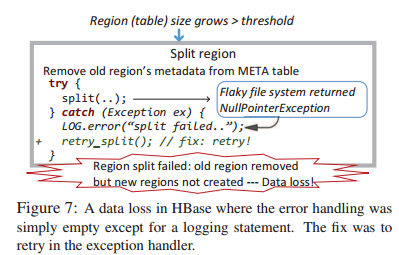 For these three scenarios, the authors built a static checking tool called Aspirator and used it to check some real world systems, including those in the study.

If Aspirator had been used and the captured bugs fixed, 33% of the Cassandra, HBase, HDFS, and MapReduce’s catastrophic failures we studied could have been prevented.

Using Aspirator to check the 9 systems shown in the table below found 500 new bugs and bad practices, along with 115 false-positives. 171 of these were reported as bugs back to developers, and as of the time the paper was published, 143 had been confirmed or fixed by the developers.

Another 57% of catastrophic failures caused by incorrect error handling do require some systems-specific knowledge to detect, but not a lot for a significant proportion of them…

The final 34% of catastrophic failures do indeed involve complex bugs in error handling logic. These are much harder to systematically root out, but hey, getting rid of the other 2/3 of potentially catastrophe-inducing bugs is a pretty good start!

Failures are mostly easy to reproduce

A majority of the production failures (77%) can be reproduced by a unit test.

And if you do need a live system to reproduce a failure, you can almost certainly get away with a three-node system:

Furthermore, most failures require no more than three input events to get them to manifest. 74% of them are deterministic – that is, they are guaranteed to happen given the right input event sequences.

The information you need is probably in the logs

Right next to that needle.

For a majority (84%) of failures, all of their triggering events are logged. This suggests that it is possible to deterministically replay the majority of failures based on the existing log messages alone.

The logs are noisy though, the median number of log messages printed by each failure was 824, and this is with a minimal configuration and a minimal workload sufficient to reproduce the failure.