Collobert’s 2011 paper that we looked at yesterday represented a turning point in NLP in which they achieved state of the art performance on part-of-speech tagging (POS), chunking, and named entity recognition (NER) using a neural network in place of expert crafted systems and algorithms. For the semantic role labeling (SRL) task though, Collobert et al. had to resort to including parsing features. With today’s paper, that final hold-out task also falls to the power of neural networks, and the authors (from Baidu research) achieve state-of-the-art performance taking only original text as input features. They out-perform previous state-of-the-art systems, that were based on parsing results and feature engineering, and which relied heavily on linguistic knowledge from experts.

Zhou & Xu’s solution uses an 8 layer bi-directional RNN (an LSTM to be precise). Using an LSTM architecture enables cells to store and access information over long periods of time. We saw last week the technique of processing sequences both forward and backward, and combining the results in some way (e.g. concatenation):

In this work, we utilize the bi-directional information in another way. First a standard LSTM processes the sequence in (a) forward direction. The output of this LSTM layer is taken by the next LSTM layer as input, processed in (the) reverse direction. These two standard LSTM layers compose a pair of LSTMs. Then we stack LSTM layers pair after pair to obtain the deep LSTM model. We call this topology a deep bi-directional LSTM (DB-LSTM) network. Our experiments show that this architecture is critical to achieve good performance. 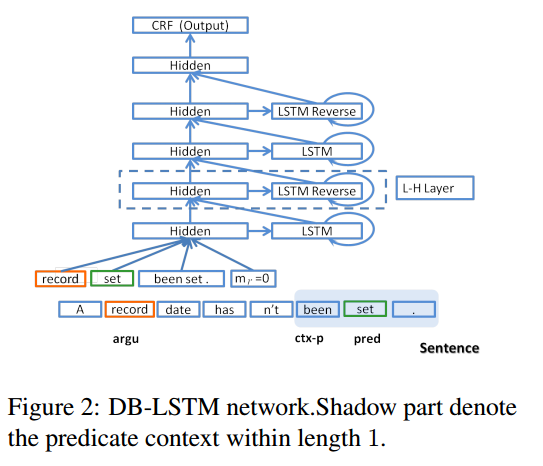 The output is is the semantic role of each word. For the sentence “A record date hasn’t been set.”, this results in the following feature inputs and outputs: 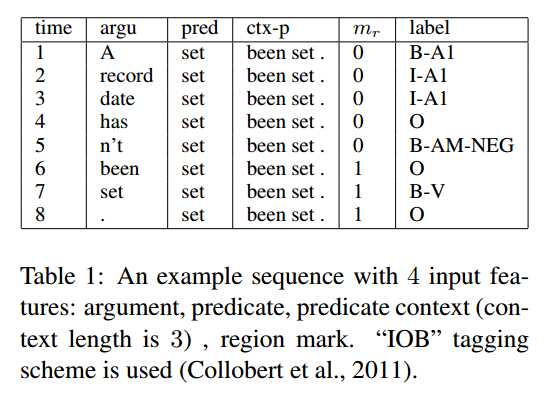 The above four features are concatenated to be the input representation at the time step for the following LSTM layers… As in traditional methods, we employ CRF (Lafferty et al., 2001) on top of the network for the final prediction. It takes the representations provided by the last LSTM layer as input to model the strong dependence among adjacent tags. 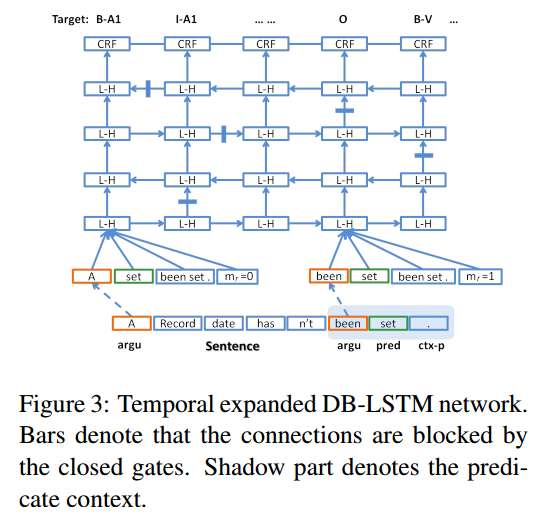 Contribution of features and layers to model performance

Overall the model is evaluated on the CoNLL-2005 shared task and achieved an F1 score of 81.07 (outperforming the previous state-of-the-art). On CoNLL-2012 an even better F1 score of 81.27 was obtained. It’s also efficient, capable of processing 6.7K tokens per second.

A very nice evaluation section builds up to the full solution, making clear the contributions made by different parts of the system:

In our experiments, increasing the model depth is the major contribution to the final improvement. With (a) deep model, we achieve strong ability of learning semantic rules without worrying about over-fitting even on such a limited training set… It is encouraging to see that deep learning models with end-to-end training can outperform traditional models on tasks which are previously believed to heavily depend on syntactic parsing. However, we recognize that semantic role labeling itself is an intermediate step towards the language problems we really care about, such as question-answering, information extraction, etc. We believe that end-to-end training with some suitable deep structure yet to be invented might be proven to be effective at solving these problems.